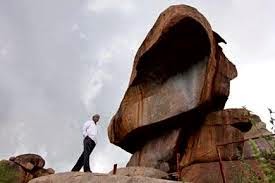 Ever since 10000 BCE there has been a steady migration of people to Indian peninsula from northwest. The migrated people established themselves into Indus-Sarswati basins. This civilization continued almost up to 1750 BCE. As water sources dried up in Indus-Sarswati basin, the people settled there started migrations not only to south and east but also by sea to seek new lands. A recent finding shows that there was an Indian migration even to Australia around 4230 years ago.

Where did the Indus civilization people go and settle after leaving the Indus-Sarswati basins, would be the logical question to ask. An eminent archaeologist M.K.Dhawalikar, gives us a lead in his book “Environment and Culture,” (pp. 133), when he explains about the origin of Malwa culture as;

" ..but the origin of the chalcolithic culture of Malwa may perhaps ultimately be traced to the early Harrapans -the people of Kalibangan I, in Rajasthan."

The migrating Harrapans did not stop in Malwa region forever, they moved further south towards present state of Maharashtra. M. K. Dhawalikar mentions about this migration in this book (pp.135) and I quote;

"The Harrapans too had made inroads into the heart of Mahrashtra as is clear from the Daimabad evidence ( Sali 1986). But the large scale colonization of Maharashtra took place about 1800 BC when the Malwa people located their settlements not only in the Tapi valley but as far as south in Bhima valley."

Can we conclude that Harrapans migrated only to Malwa region (part of present Madhya Pradesh state) and Maharashtra? Possibly not! But where else did they go? They perhaps spread over entire Gangatic plains. But did they also migrate to the south in Karnataka, as one interpretation of a new evidence claims?

The ruins of Hampi in Karnataka state are one of the most important remnants of medieval India. A large, relatively unknown Vishnu temple stands midway to Vittala Temple from Kamalapura. A dirt road leads to some Banana plantations from the temple. About two kilometers down this road, there is an abandoned area with banana plantations on one side and hills dotted with oversized boulders on the other. On these hills, some ancient caves are known to exist. A decade ago, KM Metry, a Kannada University professor of Tribal Studies, Head and Dean, Social Sciences, Kannada University, Hampi, was walking alone on this dirt road when he saw what he thought was a light scribble on a rock in the distance. Professor Metry climbed the hill on which the rock stood and cleaned the rock surface to get a clearer look. Surprisingly, it was an ancient rock painting, drawn with some form of vegetable oil and contained as many as 22 symbols. He continued to discover similar rock paintings with different symbols around Hampi after that.

In the following years, his research on Gondi culture and visits to tribal areas in Chhattisgarh region convinced him that the rock paintings he had encountered in Hampi were actually Gondi symbols. Later he came across a book that referred to yet- undeciphered script of the Indus Valley Civilisation and realised that there existed a great similarity between symbol characters of Indus civilization script and Gondi script characters, he had discovered at Hampi. Professor Metry says and I quote;

Gonds form the largest tribal group in south Asia. They live all over central India, and in the states of Maharashtra and Orissa as "hill people" in the Deccan Peninsula. Gondi culture is a totemic culture. Associated with its famous “Ghotul Schools” are many such script symbols. Gondi language is also similar to Dravidian languages (South Indian Languages).

A set of 19 pictographs from a cave in Hampi were deciphered recently by Prof. Metry and his associates. They came out with a sentence that probably was written in the Gondi script of symbols in the Hampi caves that says:

“On the goddess Kotamma temple woollen market way there is a rocky roof shelter for shepherds and sheep to stay at night up to morning.”

The similarity between Indus civilization script and Gondi script, no doubt is striking and definitely suggests a link and possible migration of Indus civilization people to lands inhabited by Gond tribal in central India. However Professor Metry's statement that the Harappans migrated from the Indus Valley to South India seems to be rather a tall order, because there is hardly any other evidence.

In conclusion, we might be able to accept migrations of Indus civilization people in lands of Gond tribals as they did in Malwa and Maharashtra. However the idea that the Harappans migrated from the Indus Valley to South India, appears to be a far fetched one.