The Taj Mahal; a monument that is considered as the world's greatest symbol of love, was built by the Emperor Shah Jahan in 1653 as a mausoleum for his third and favourite wife, Mumtaz Mahal, who died giving birth to their 14th child. This beautiful Mughal era building, consisting of domes and minarets has been paneled with white marble, inlaid with semi-precious stones and carvings. It is considered as one of the finest example of Mughal art in India. It was declared an Unesco World Heritage site in 1983.

This fabulous monument is situated on the bank of river Yamuna, near the city of Agra in the northern Indian state of Uttar Pradesh. Agra happens to be a busy and industrial city and there is an oil refinery nearby. Because of these reasons, the pollution levels around the monument remain high. In addition, this wonder of the world attracts millions of visitors from all over the world. All of this takes a heavy toll on Taj Mahal with its white marble panels yellowing and losing their sheen.

A report, based on a study conducted by experts from Indian Institute of Technology, Kanpur and Archaeological Survey of India along with experts from US universities — Georgia Institute of Technology and University of Wisconsin was published in the Environmental Science & Technology journal in December 2014. The report, titled as The Discoloration of the Taj Mahal due to Particulate Carbon and Dust Deposition, and written by M.H.Bergin, S.M.Tripathi and others says and I quote;

“ The white marble domes of the Taj Mahal are iconic images of India that attract millions of visitors every year. Over the past several decades the outer marble surfaces of the Taj Mahal have begun to discolor with time and must be painstakingly cleaned every several years. Although it has been generally believed that the discoloration is in some way linked with poor air quality in the Agra region, the specific components of air pollution responsible have yet to be identified. With this in mind, ambient particulate matter (PM) samples were collected over a one-year period and found to contain relatively high concentrations of light absorbing particles that could potentially discolor the Taj Mahal marble surfaces, that include black carbon (BC), light absorbing organic carbon (brown carbon, BrC), and dust. Analyses of particles deposited to marble surrogate surfaces at the Taj Mahal indicate that a large fraction of the outer Taj Mahal surfaces are covered with particles that contain both carbonaceous components and dust.” The study concludes with certain findings that deposited light absorbing dust and carbonaceous particles on Taj Mahal are responsible for its surface discolouration.

When the federal parliamentary standing committee (PSC) of India came across this report, they immediately took cognizance of the report and sought an explanation from the Agra city authorities. They were asked to travel to New Delhi and give a presentation on steps taken by the civic body to curb air pollution in Agra. When the presentation was done, it was felt that civic administration probably was not doing enough to save Taj Mahal from the environmental discolouration and PSC gave the local administration two months to find ways to reduce pollution level in the city.

Archaeological survey of India (ASI) has been giving a mud pack treatment to Taj since 1994. The ancient Sanskrit texts of Ayurveda; the ancient Indian medical system, have prescribed many types of packs as cure for skin ailments as well as for beauty enhancement. One of the important treatment in this is the mud flap cure, which consists of giving a coat of a mixture of mud mixed with a few other natural substances on the body. Ayurveda believes that such a pack can do the highest level of tissue cleansing and detoxification for the body. One of the important mud packs well known in India is that of “Multani Mitty” or mud from Multan. It is however nothing but what is known as Fuller’s earth in the west.

Taking a cue from Ayurveda, ASI has been giving a mud pack beauty treatment to Taj in which a 2mm-thick layer of this lime-rich clay is plastered over the affected areas of the monument and left overnight to dry. Next day, when it dries, the flakes would be removed from the surface with soft nylon brushes and washed with distilled water to remove impurities sticking to the surface. 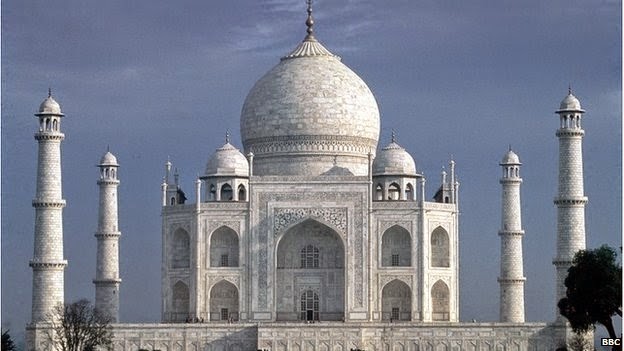 Giving this beauty treatment is one thing, but if the polluting sources themselves are cut off, the discolouration process itself could be controlled. After PSC's directive, Agra municipal authorities seem to have awakened to the fact that their apathy and neglect is harming the 366-year-old mausoleum, which remains by far the most visited man-made structure in the country with footfalls of more than 6 million in 2013 and have taken number of steps to correct the situation. Last week, the Agra district administration, ordered almost 4,000 diesel-run mini pick-up trucks operating in the city to convert to CNG by July this year. It also banned with immediate effect the burning of cow dung cakes within city limits and decided to impose a fine of Rs 500 on those found burning garbage in the open. Ban on burning cow dung cakes is likely to be resented by poor people because Cow dung is a common source of fuel in India for poor people. City authorities want to help them with new gas connections

The measures are welcome as Taj Mahal happens to be the most prestigious monument from the past for India and has to be saved. It is hoped that city authority's efforts would pay off and no further mud-pack treatments would be required for Taj in future.