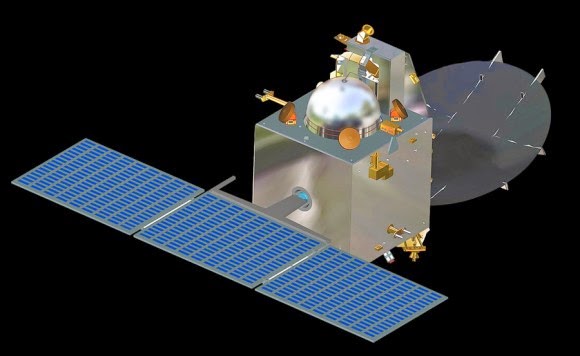 Like a proud mother of a six month old bonny baby smiling in her lap, India's Indian Space research organization also appears to be mighty pleased with their six month old healthy offspring; MOM or Mars orbiter. On new year's day, MOM completed 100 successful days in the orbit of the red planet.

I have written a number of articles about MOM in last one year. The initial anxiety of a technologically tough mission soon gave way to happiness and jubilation for millions of fans in India as the little spacecraft weighing just 1350 Kg, successfully kept meeting one challenge after another and surpassing series of obstacles.

First it managed to get itself slinged out of the earth's orbit. It was re-oriented and the on board rocket fired to move tangentially to the earth's orbit. This 23 minute long engine firing, finally imparted a velocity of 11.4 Km per second to the spacecraft and slinged it out of the clutches of the mother earth to reach a hyperbolic orbit and later into a perfect elliptic orbit around the Sun like a comet.

Some 300 days later it approached the Martian sphere of influence after having travelled 680 million km. The spacecraft orientation was then changed by 180 degrees so the main rocket engine that previously accelerated the spacecraft would slow it down. Later the main engine was fired off and it started slowing down the space craft. After an agonizing quarter of an hour, first signals were received that the MOM was in martian orbit. In October 2014 MOM had to face another tough challenge as a comet called Siding Spring and identified as Comet C/2013 A1, bulldozed through Martian atmosphere as it had an extremely close passage by the planet. MOM's orbit had to be modified so that it was behind the red planet when Sliding Spring had a close passage by Mars. 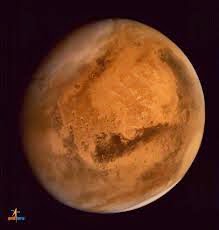 Given this history of successes, it was no wonder that ISRO scientists were very pleased with the performance of the spacecraft after 100 days. However, the real reason of their happiness is that the spacecraft still has 37 Kg of rocket fuel left on board. Any spacecraft can remain in its proscribed orbit only by making timely orbit corrections. MOM is no exception. It has to correct the orbit periodically to nullify the effects of Martian gravity.

According to original plan, MOM was supposed to have enough rocket fuel on board that would sustain it for 180 days or till mid March 2015 in the orbit around Mars. Surprisingly, MOM consumed so little fuel on maneuvers carried out during its journey from earth to Mars, that the stock of fuel left on board can keep it in orbit around Mars even for 15 next years.

But fuel is not the only factor that would affect the life of MOM. It carries on board five instruments, a methane sensor that looks for methane — the definite indicator of past life, an absorption cell photometer to pick up traces of deuterium and hydrogen, which could suggest early existence of water on the red planet, a colour camera, an infrared spectrometer and a composition analyser. All these instruments would have to function normally in future too. Then only the spacecraft could be said to be in pink of health. The electronic systems that are incorporated in these instruments really hold the key to MOM's longevity. There are many space phenomenon like solar wind and solar flares that are not fully understood by us. Besides there is always possibility of an impact with space dust or small meteorites. Such unexpected incidents can limit MOM's life.

Here are some details of the instruments on board. Luman Alpha Photometer- Helps measure the amount of loss of water on Mars, Methane sensor- used to measure Methane in the atmosphere and map its sources, Mars colour Camera- Givers images and information about surface features, composition and monitors weather, Thermal infrared imaging spectrometer- Used to map surface composition and mineralogy on the planet and finally Mars exospheric Neutral Composition Analyser- A mass spectrometer capable of analysing the neutral composition.

In the month of June 2015, the planets would be so aligned that the sun would come in between Mars ( which also means MOM) and Earth, cutting off the signals sent from Earth to MOM. This means that MOM will go through a phase of no communication with earth. This period would test whether the spacecraft is fully autonomous ( ability to gauge its own health, remain in orbit and carry out experiments without orders from Earth) or not. This is another crucial period, that would determine MOM's life.

When MOM was launched last year, the life expectancy was only to Mid March 2015 and hence all these eventualities did not come in picture at all. Now, because of the exceptionally good performance, MOM is expected to last much longer. Scientists therefore would be able to test all spacecraft systems for longevity in space, which should prove to be a bonus from the point of future missions.