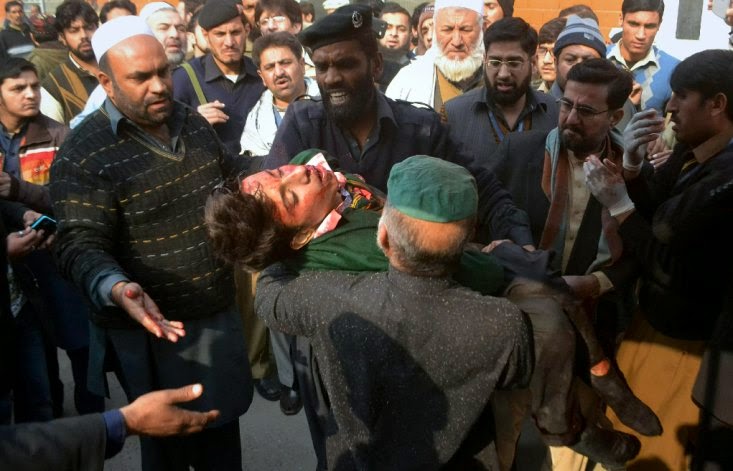 Bamiyan town in central Afghanistan is considered as one of the most picturesque and beautiful place in Afghanistan. Even in first millennium of our era, it was so breathtakingly beautiful that famous Chinese monk- traveller Xuan Zang, describes Bamiyan in glowing words in his travelogue written in seventh century. Another traveller has mentioned that if heaven is to be ever found on Earth, it would be in Bamiyan only.

The calm and quiet tranquility of the affluent Bamiyan was destroyed for the first time in 1272, when great conqueror Genghis Khan sent a small army led by his grandson to capture Bamiyan. In the ensuing battle, the grandson was hit by an arrow and died. After learning about this, Genghis Khan got so angry that he sent his army to Bamiyan with orders that no human or animal should survive the onslaught. His soldiers, scared of his reprisal, if his orders were not followed in toto, carried them out and every living being around Bamiyan was mercilessly massacred. The signs and remnants of the total ruin and destruction brought about are still visible in form of some of the ruined forts.

I was reminded of this historical act of utmost cruelty, as I watched on TV, the horrible sequence of events that happened in the city of Peshawar in Pakistan's Khyber Pakhtunkhwa province. There is however one major difference between what happened in Peshawar yesterday, when hundred and twelve innocent kids were brutally massacred with what Genghis Khan did in thirteenth century. Genghis Khan's world was a medieval world, where armies of brigands freely roamed around, looting and killing people at their wish. Those were also the times when armies of various kings regularly went around to conquer new areas for attaching them to their kingdoms. Today in twenty first century, the scenario is vastly different with well organised and law abiding states ruling the land.

Unfortunately, there are still pockets or regions, where the times do not seem to have changed in last thousand years and armies of youth, obviously brain washed by religious zealots, continue to terrorize innocent populace. The only change that has taken place is that these religious brigands now use AK 47 rifles instead of swords and Toyota pick up vans instead of horses. So effective are these zealots that they can pick up their brain washed youth from long distances and lure them.

The Peshawar tragedy is so horrifying and disturbing that I have no words for it. In any case, most of the readers must have already read about the unfortunate happening. Six terrorists armed to teeth, entered into an army school complex, where number of schools, imparting education to students of all ages, toddlers to highschoolers exist, by climbing over the back wall. They had specific instructions to kill the older boys and leave the toddlers alone. By the time they finished their job and they blew themselves up, 112 children were dead.

It is natural for Indians to remember the Mumbai attacks of 26th September 2008, in which 164 people were killed by Pakistan based terrorist members of Lashkar-e-Taiba. This time the terrorists belonging to Tehrik-i-Taliban have chosen to kill innocent kids, who had nothing to do with any kind of violence. Tehrik-i-Taliban or "Taliban Movement of Pakistan" is an umbrella organization of various Islamist militant groups based in the northwestern Federally Administered Tribal Areas along the Afghan border in Pakistan. In December 2007, about 13 terrorist groups united under the leadership of Baitullah Mehsud to form the Tehrik-i-Taliban Pakistan. Their stated objectives are resistance against the Pakistani state, enforcement of their interpretation of sharia and a plan to unite against NATO-led forces in Afghanistan. Tehrik-i-Taliban is not directly affiliated with the Afghan Taliban movement led by Mullah Omar. Both groups differ greatly in their histories, strategic goals and interests although both are predominantly of Pashtun race.

In June 2014, the Pakistani military launched an offensive against Tehrik-i Taliban, killing more than 1,800 militants as well as an unknown number of civilians in the group’s hideouts in North Waziristan. Yesterday's massacre was supposed to have been carried out as an act of revenge for the Pakistani offensive.

The Pakistani army has announced that they will continue with the offensive, but there are questions about, whether Pakistani army has the capability and will to take meaningful action against what an expert calls a spider web of terrorist groups spread throughout the country.

Pakistan needs to take up an all out offensive against terrorists, but this is unlikely to happen, because Pakistani army also nurtures and collaborates with terrorists to foment troubles in border regions of India. Pakistan continues to have a selective attitude toward terrorist groups within the country’s borders. On one hand Pakistan is fighting against Tehrik-i-Taliban but on other hand it continues to protect or turn a blind eye to organizations like Jamaat-ud-Dawa, a frontal group for Lashkar-e-Taiba, the terror organization that mounted the 2008 attack on Mumbai.

The Mumbai attack master mind, Hafiz Saeed — who has a $10 million U.S. government bounty on his head — staged a public rally recently in Lahore, Pakistan, with no response from the Pakistani government.

Unless Pakistan gives up its duplicity and selective attitude toward terrorist groups within the country’s borders, it is unlikely to achieve total victory against terrorists. This change is unlikely to happen and there is always a possibility of similar horrendous events happening even in future. This is the real tragedy of Pakistan. Pakistan needs to remember that there are no good or bad terrorists, any terrorist is only a scion of likes of Genghis Khan.