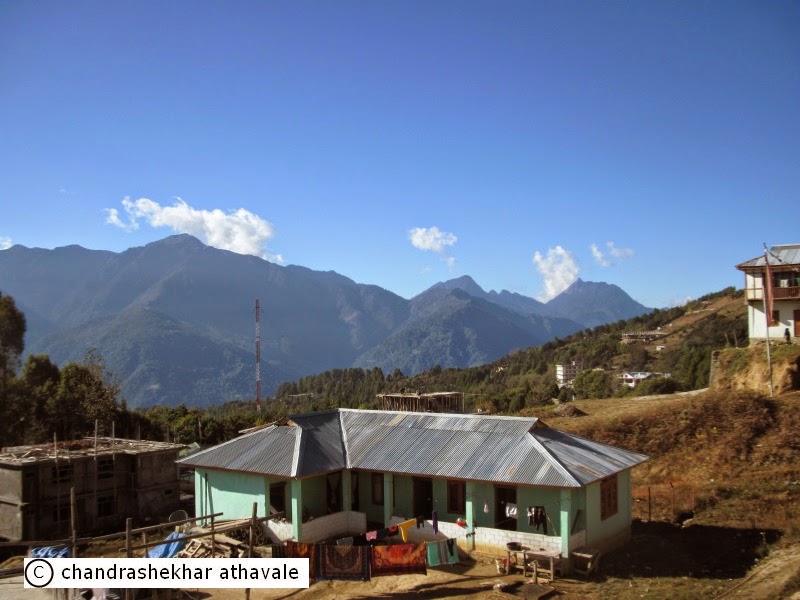 As our cars leave the beautiful town of Tawang, my feelings are rather mixed. I am feeling like having read a novel, where final few pages have gone missing, having missed the much anticipated visit to the India-China border. The weather is excellent with bright sunshine filtering through everywhere. I am told that just last week, weather was somewhat nasty with temperatures dropping by a few degrees because of cloudy weather. We start our descent in the Tawang Chu river valley. Four days ago,when we had come up by this road, it was dark and the same road looked deserted and as if it is passing through some uninhabited region. Now things look just the other way. Along the entire stretch of this road, right up to Tawang Chu river itself, there are military camps as well as villages. People are going about doing their normal activities. It is kind of amusing to see, how deceptive is the darkness in reality. 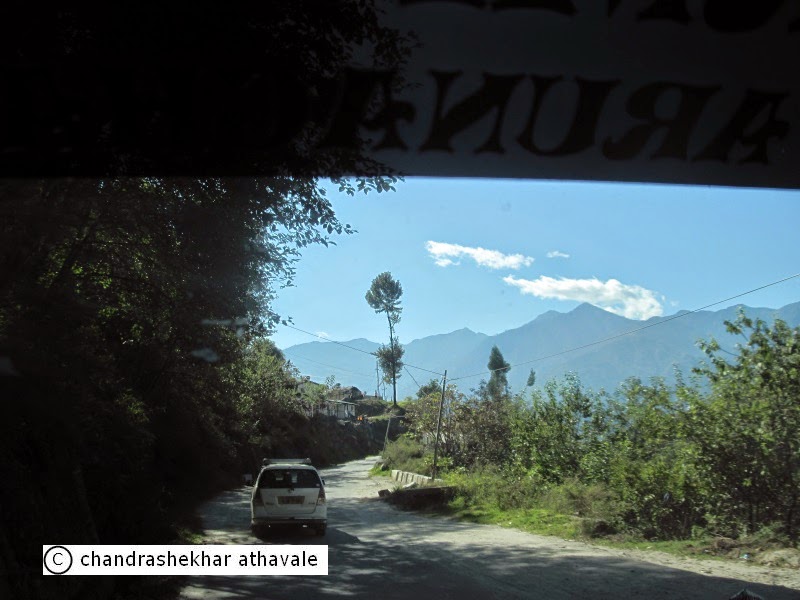 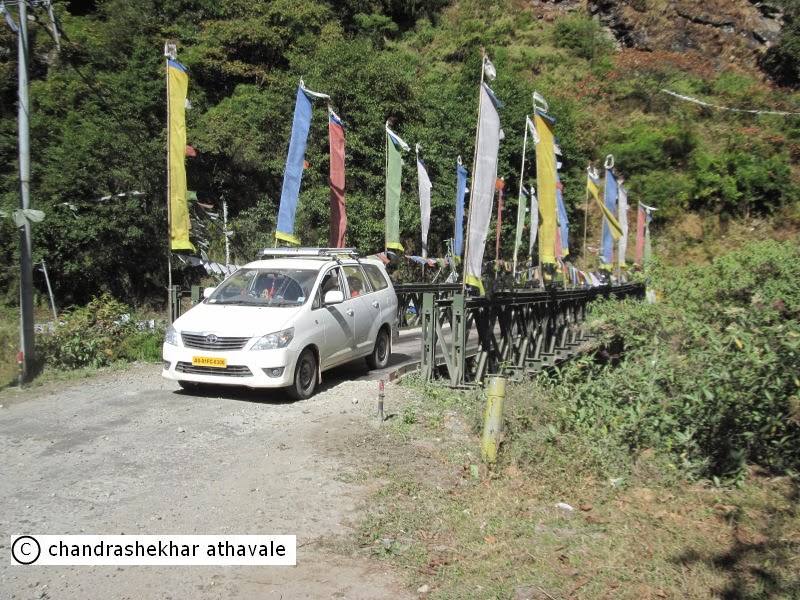 Soon we reach the Tawang Chu river bed and the steel bridge at Jang. As I had mentioned earlier, the bridge at this very spot was destroyed by Indian troops to stop Chinese advances in October 1962. We cross the bridge, start climbing up and soon take a 2 Km diversion to stop in a parking area at a place called Nyamseir. We get down and walk a few steps. Just after the next bend, one of the most beautiful waterfall in Arunachal makes its appearance. The famous Phong- Phongma or Jang waterfalls. This is also sometimes known as Nuranang waterfall, because it is here that the Nuranang river joins the Tawang Chu, after a mighty fall. 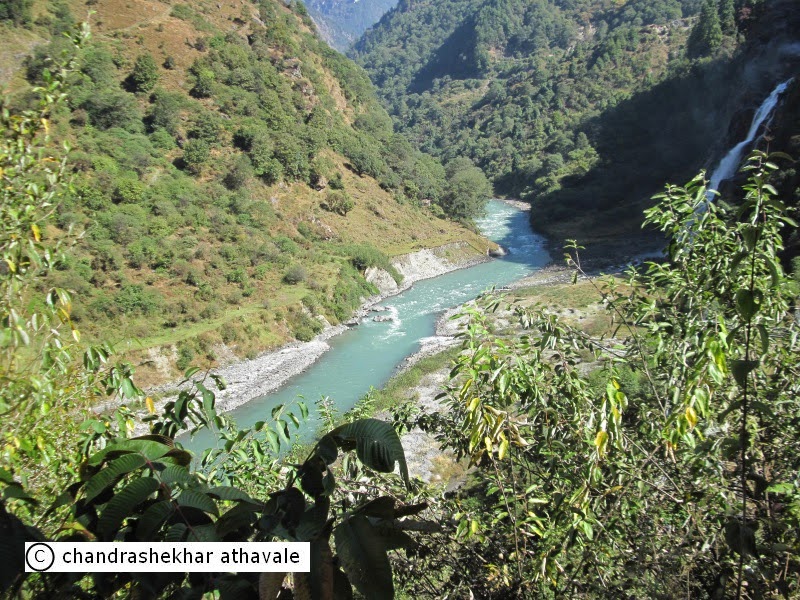 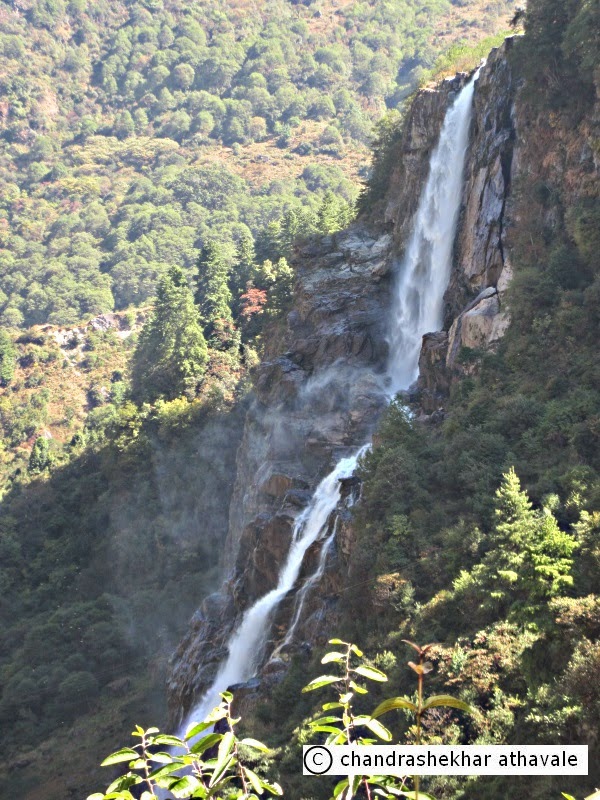 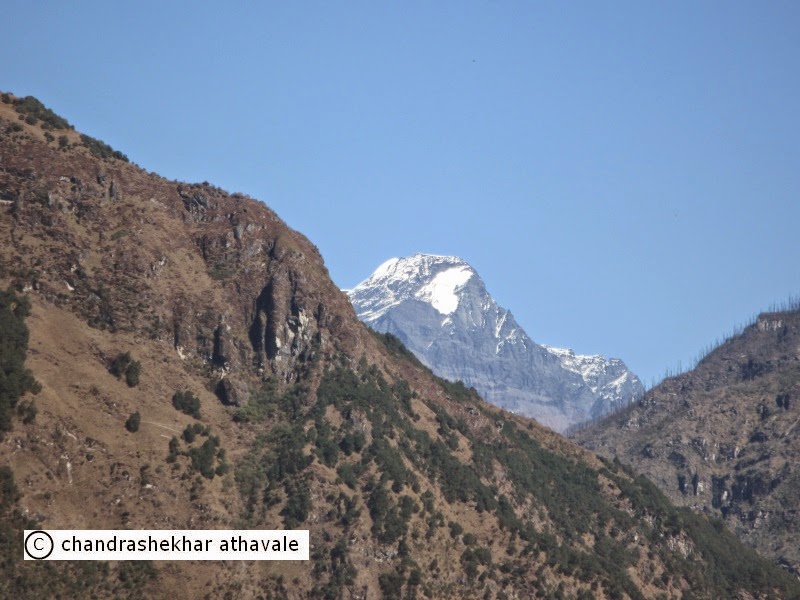 The view is absolutely enthralling as milky white water of Nuranang river takes a straight jump of about 100 meters into the Tawang Chu in two steps with a thunderous ovation. I have read that there is a small power station at base but I do not see anything like that. Perhaps it could have been hidden behind the cliff. I see a hotel from where a grand stand view of the falls can be had all the time. The green valley, studded with dense foliage, greenish water of Tawang Chu rushing towards west and the milky water of Nuranag crashing into it, cast a spell over me. I could perhaps stand here for hours and hours just watching the water. I look above towards the northeast sky; between two green ridges, a tall but tiny, ice capped mountain spur is protruding out. As we start climbing up towards Jaswant Garh, the tiny spur soon takes the form of a mighty Himalayan ridge, spread in east-west direction. Obviously these are the Himalayan peaks nearby Tulung pass from where the India-China Border line passes. We halt at Jaswant Garh for a refreshing cup of hot tea and Samosas from Army canteen and push on towards Se La-Dirang, stopping on way for Lunch. By dusk we are once again in Bomdila. 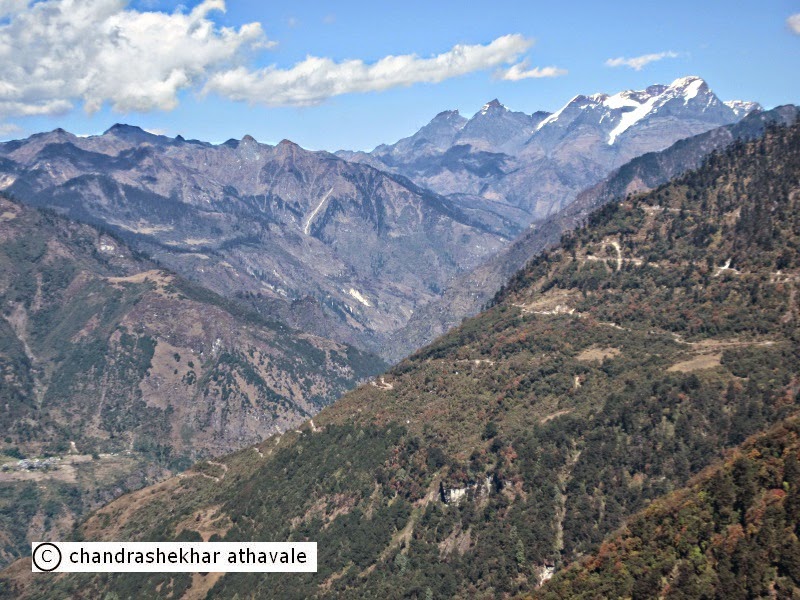 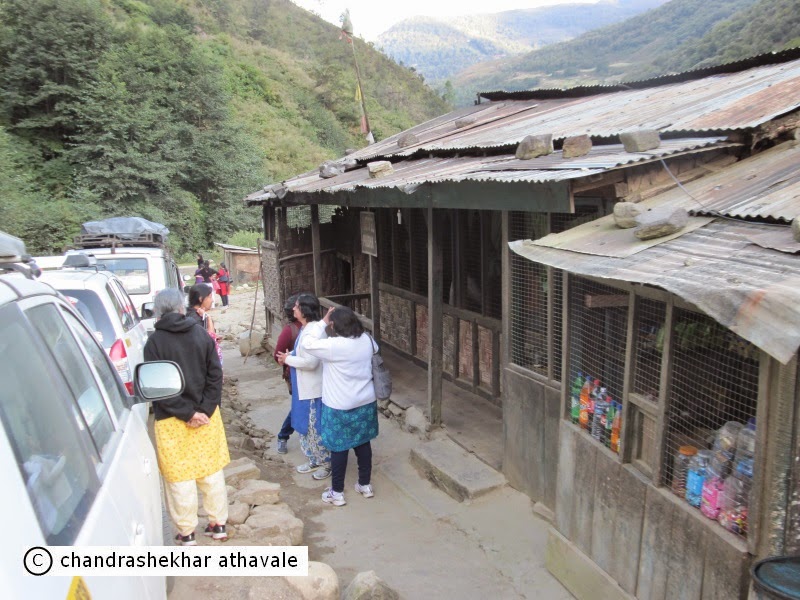 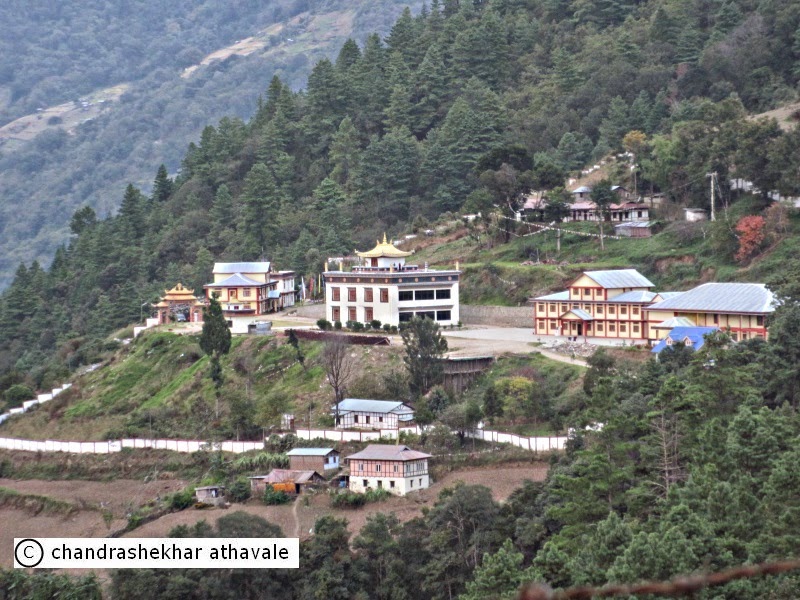 A monastery in Dirang 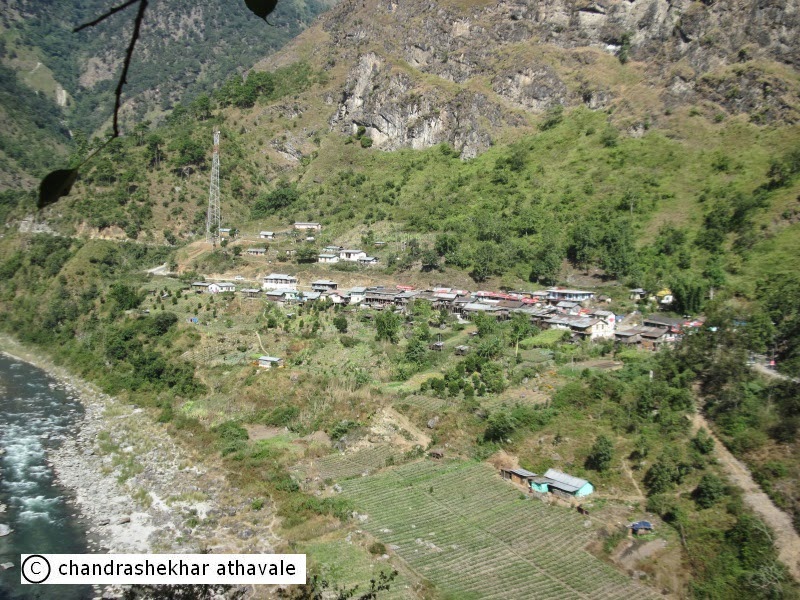 A view of Dirang town

In a funny little coincidence, I am again allotted the same room in Bomdila hotel where I had stayed 4 nights before. After a comfortable night, we leave for the plains of Assam. Somewhere on way, between army camps at Chandi Top and Tenga, the cars stop on roadside. Just opposite to us is a beautiful river valley. The Tenga river bends at this spot forming a loop. A temple is seen built on a cliff projecting out in the deep valley below. I climb up hundred or so steps up to the temple not dedicated to any God as such, but to Cobras and is known as “Nag Mandir.” 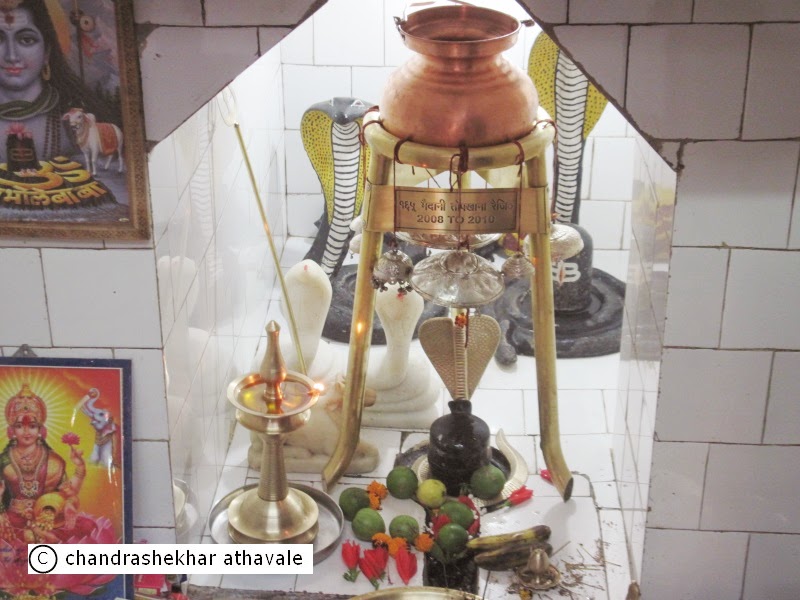 
This temple built and maintained by the local army units, was set up because when this road was being constructed in early 1960's, the area was frequented by reptiles and specifically by Cobras. The construction workers had to kill a few and there were more than usual cases of snake bites. The construction workers fearing the anger of snake Gods, started to worship them here. Eventually a temple was built at this picturesque spot overlooking Tenga river bend.

The temple has a specious viewing gallery and a hall. As I was coming down the steps, I see number of troops marching in. According to the legend board, the temple has gained importance for all local population and road users, who visit the temple to obtain blessings of “Nag Baba.” Leaving aside the reverence and devotion aspect, the temple certainly is a serene place, worth taking a break. 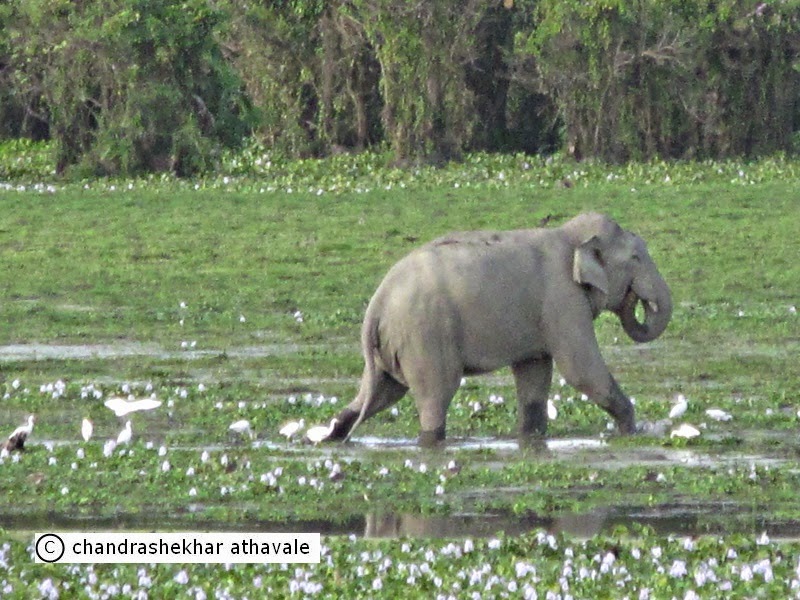 A wild elephant in Kaziranga

We continue our journey downhill, break for lunch at Bhalukpong and by late afternoon reach Kaziranga reserved forest once again. The cars stop at the vista point by road side, where we had seen number of rhinos last week to see if any wild animals are there. We are lucky as a wild elephant is seen playing in the marshes, splashing water around. After a prolonged photo session, I return to the car and after another half an hour's drive, reach the resort for overnight stay.

Tomorrow , we go for a jungle Safari early in the morning and later in the day return to Guwahati. The trip is almost coming to an end.