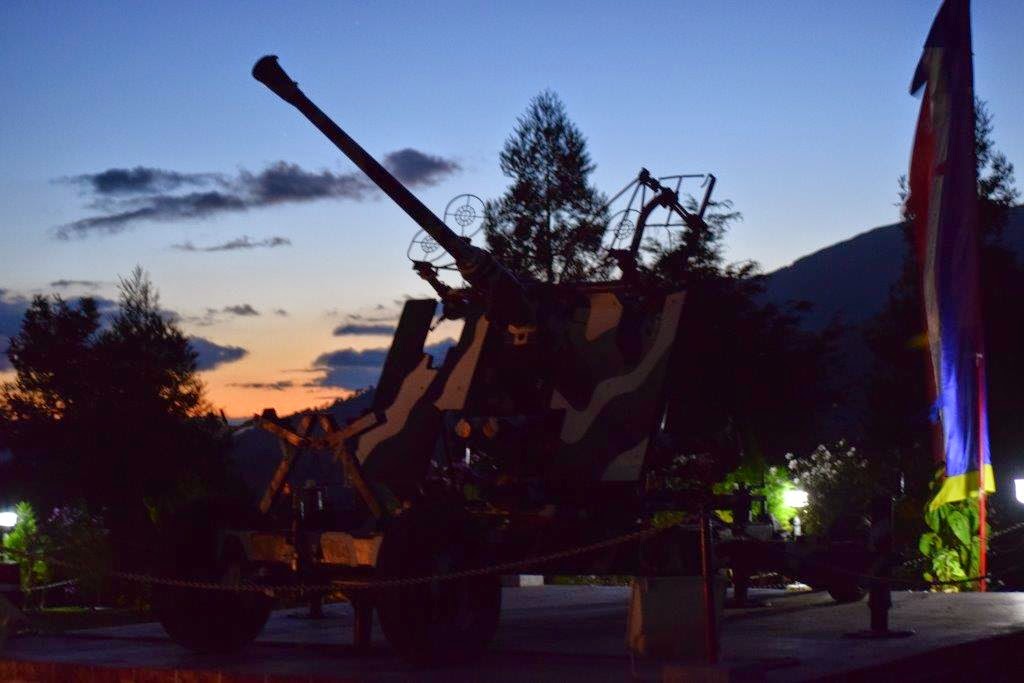 We saw earlier that the town of Tawang is located at the southwest corner of a Himalayan ridge that runs in southwest direction starting from the line of snow peaks over which the international border or McMahon line passes. This ridge is bound between two rivers, Tawang Chu- flowing towards southwest and Nyamyang Chu to south. Both these river valleys are quite deep and have roads built along their beds.

In Arunachal, the India-China war of 1962 can be divided into three parts; firstly the October 1962 offensive of Indian army in Thagla ridge area ending in a terrible disaster. Secondly the invasion by Chinese troops in October 1962 itself, in which they ran over all Indian positions along Nyamyang Chu river to confluence with Tawang Chu river and covered all of Tawang ridge up to the valley of Tawang Chu river in south. The third part covers the Chinese advances in Se La and Dirang made by troops advancing along Nyamyang Chu river to Lubrang Chu along Bhutan border and forces crossing in India via Tuling La pass- Luguthong route. Troops coming from these two routes actually succeeded in the ambush at Nyukmadung and also laid the trap at Lagyala Gompa near the village of Morshing, where Lt.Col. Avasthi fought a heroic battle. We have already seen some details of this third part earlier. 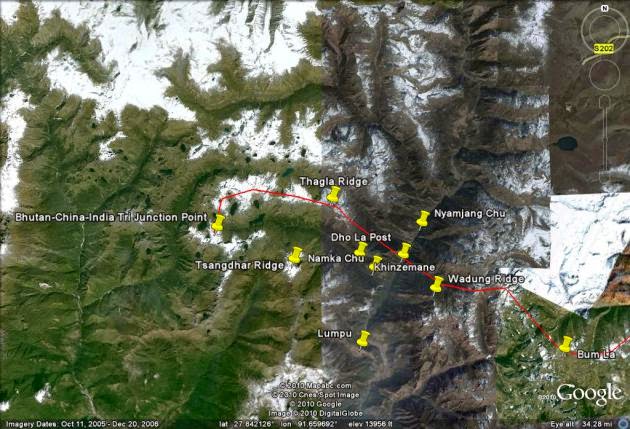 To understand the Thag La ridge offensive, it is necessary to go in for some historical details. I have mentioned earlier that the McMahon line follows the Himalayan peaks all along the border. However, near the Tri-junction point of the borders of Bhutan, India and Tibet, there was a minor border dispute between India and China. A small river, which swells only during monsoons, flows from this Tri-junction point to east, between two mountain ridges known as Tsangdhar Ridge in the south of river and Thagla Ridge in the north of the river, till it confluences with Nyamjang Chu river. (Another small river). According to India's position, McMahon line passes along Thagla ridge from the Tri-junction point, to Nyamjang Chu river and then continues along Wadung ridge to Bum La, whereas Chinese maintained that the border passed along Tsangdhar Ridge to Nyamjang Chu river. The Namka Chu river valley is extremely narrow and large scale troupe movements are almost impossible here. 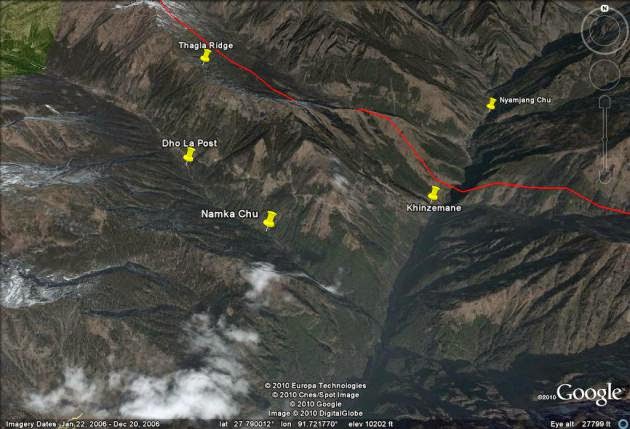 Out of the new posts set up in NEFA in 1959, one army post known as Dhola post, was set up on the southern bank of this Namka Chu river. Another post on the bank of Nyamjang Chu river further to north was also then set up at Khinzemane. Chinese soldiers had attacked this post in 1959 and had pushed Indians back from this post. Indians had reoccupied this post after Chinese had gone back and were holding it till 1962 Autumn.

In Agust-September 1962, Chinese army brought in their men in large numbers to the Thagla ridge area. Army sources reported to Delhi that about 400 Chinese were now positioned on Thagla ridge. Presence of Chinese in such large numbers was a direct threat to posts at Dhola and Khinzemane. After this news reached Delhi, Defense minister Krishna Menon suggested to Chief of Army staff, General Thapar that the Chinese on Thagla ridge should be immediately evicted from there. Knowing the ground realities well, General Thapar tried to argue with the defense minister about futility of any such major action in that narrow area. He was however told that considering the political pressure on Prime minister Nehru, this order has to be obeyed by the army.

Till September end, there were only incidences of minor skirmishes in Namka Chu valley with overall military situation fairly stable. However large number of Indian troupes descended in this area on orders from Delhi in next few days. This large scale arrival of Indian troupes in this narrow valley was hallmarked with total disarray, disorder, confusion and mismanagement not usually associated with a military movement on this scale. The soldiers did not have enough warm clothing, ordnance was in short supply. Troupes provided with mortar launchers had no mortars to launch. There was paucity of guns and being such a narrow valley and that to on the international border, para dropping was not feasible. After realizing the desperate situation of these new arrivals, the officer in charge of the operation, Maj.Gen Umrao Singh, bitterly complained to his seniors in Delhi. This resulted into a decision, which had direct bearings on the final outcome of the conflict. Maj.Gen Umarao Singh was abruptly transferred and in his place a comparatively inexperienced officer, Maj. Gen. B.M. Kaul was brought in as officer in command. In an most surprising decision Ma.Gen. Kaul was ordered to liaison directly with Prime minister Nehru and not through normal official channel of Army HQ or chief of army staff. It can be said that Chief of Army staff, General Thapar disassociated himself with the Namka Chu operation completely. In next fortnight, approximately 2500 Indian soldiers arrived in Namka Chu valley. The strategic battle plan prepared by Maj. Gen. B.M. Kaul has been discussed in many forums over the years, including some on the internet and there is unanimity of opinion that in the history, very rarely one may find, anything as disastrous as this.An excellent account of the battle can be read on this link. 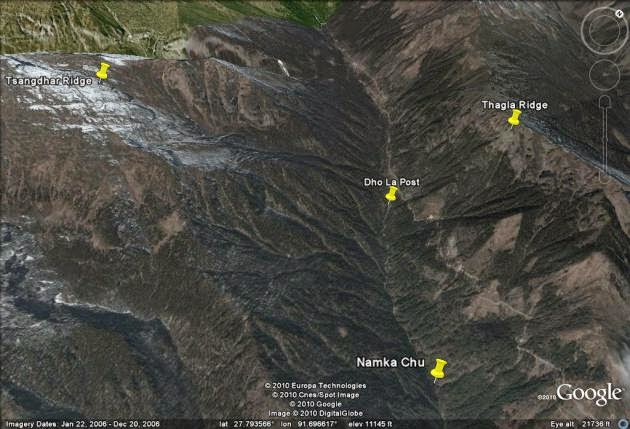 The Chinese saw arrival of such large numbers of Indian soldiers in Namka Chu valley as a big danger sign and Chinese soldiers also started arriving in very large numbers. By 20th October 1962, as many as 30000 Chinese soldiers arrived on Thagla ridge area. Only after their arrival, Maj. Gen. B.M.Kaul came to realization that he had brought such large numbers of his own soldiers in a death trap. However it was too late now. On 21st October 1962 Chinese crossed Namka Chu river and captured all Indian positions on the south bank of the river. On 23rd October 1962, Government in Beijing allowed PLA to cross McMahon line as and when required. Indian army soon realized that it was impossible to launch any counter offensives because enemy had all the advantages and they started retreating. Within next 5 days of massacre and debacle, India army was pushed back 10 miles to south of McMahon line to Lumpo.

Within days of this incident, Chinese launched their major offensive on Tawang. The attack was planned along three routes. Direct Bum La- Tawang axis route via Tonpeng La; from Zemithang in Nyamyang Chu valley -Y junction and lastly from Shakti village in Nyamjang valley via Lum La pass. The epic battle fought by Subedar Joginder Singh, which I have mentioned earlier was fought near Tonpeng La. This was followed by one of the most controversial decisions taken by Generals stationed at Tawang, who decided to surrender the town and retreated all Indian forces south of Tawang Chu river.

The men lost in Namka Chu battle mainly constitute the martyrs listed at Tawang memorial and this means that the loss of these brave men was not because they were lacking in bravery but because they were put in an impossible situation by country's top politicians and inept generals.

I am awakened from my thoughts as the light-n-sound show begins sharp on time. The show is well narrated with details about Arunachal, Tawang, tourism places around and some parts of history. A satisfying presentation. After the show we get back to hotel, where great news awaits us that all permissions have been secured for us to visit the India-China border at Bum La. So it is early dinner and bed time as we need to start rather early.

I wake up quite early but within seconds a realisation comes over that something is seriously wrong with me and I am in much of pain. I find myself under attack of a severe bout of diarrhea, perhaps as a result of high altitude sickness. As I lie on my bed, it becomes increasingly clear that I can not make the trip to the border. Only thing that I can do is to see everyone else in the group leaving for the day's journey. I feel terribly disappointed at having reached to about 50 Km from the border, yet can not make the final mile. There is a total feeling of helplessness as I lie down in this strange place. 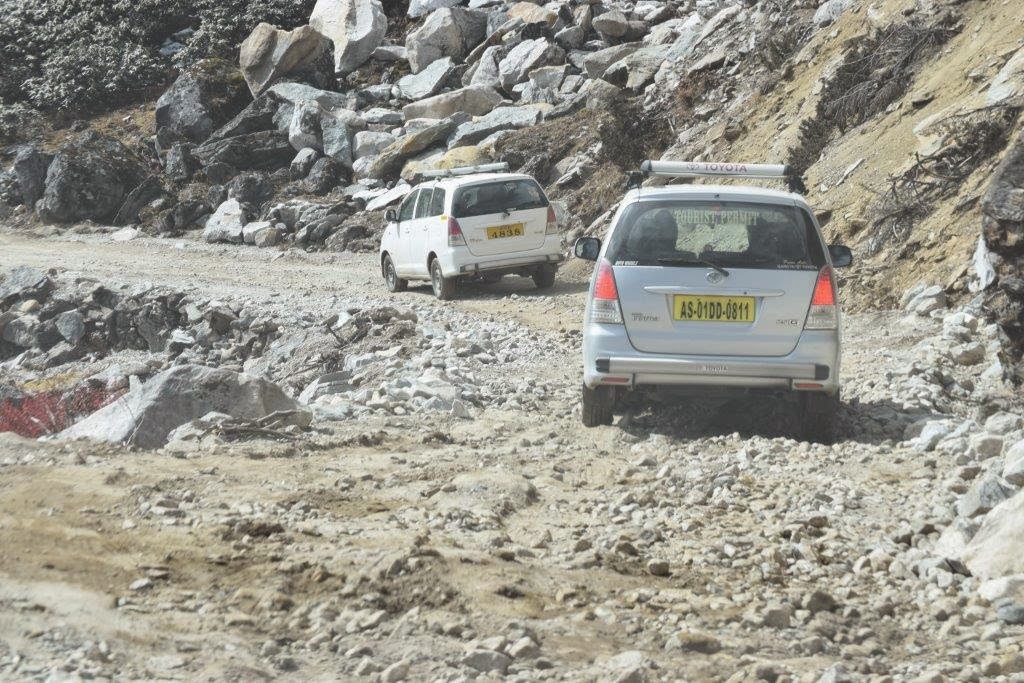 
On Way to the border

After an hour or so my condition has become quite pathetic and it is clear that I need to see a doctor. I decide to consult the hotel manager, who turns out to be a real help. He says that being a Sunday, consulting a Doctor is out of question and I would have to visit the emergency ward of the hospital nearby. He arranges for the hotel van and a driver for me to go to the hospital. Feeling extremely weak, I manage to get into the van and we rush to the hospital.

The district hospital is actually only a few minutes drive away. The van stops near the gate of the emergency ward and driver helps me to get in. Being a Sunday, the place is quite empty. Two nursing staff member ladies appear and ask me about what is wrong, After hearing me, one of them, who is presumably a trainee doctor, phones the resident doctor and within minutes tells me that I would have to be put on a medicinal drip. She asks me to get some medicines from nearby shop; the van driver volunteers to get the medicines and within next fifteen minutes I am lying on a hospital bed with an intravenous drip. The nursing staff is really wonderful and chats with me to remove my blues. Feeling bit cold, I ask for a blanket. The nurse apologises giving me an impression that they have no blankets. However, she clarifies that they have only red coloured blankets and can I accommodate with that. I need a blanket right now, the colour is hardly important.

After an hour and two bottles of drip gone in my veins, I feel much better. The resident doctor turns up, prescribes some more medicines and says I would be fine. Now comes the most surprising part when I ask the nursing staff about the charges for my treatment, already scared that my pockets would be lightened substantially. But I am told that this is the Government hospital and the treatment is free. Would I give a donation of 10 Rupees to the welfare society? I am just overwhelmed and do not know what to say. I quietly slip a 500 Rupee note, for which I am given a proper receipt. Staff accepts no tips also.

The driver brings me back to hotel. I want to pay him for the ride. The hotel manager turns up and says the ride is on the house. I just do not know how to thank all these kind hearted people, who are giving me such a wonderful service as a part of their job. Leaving aside all the disappointment of the morning, I am feeling so much better with the compassion and warmth shown by these people. I feel sure that I just had one of the most wonderful experiences of my life time, in this little remote town on India's border. A unique Tawang memory, which no one else can ever have or share. 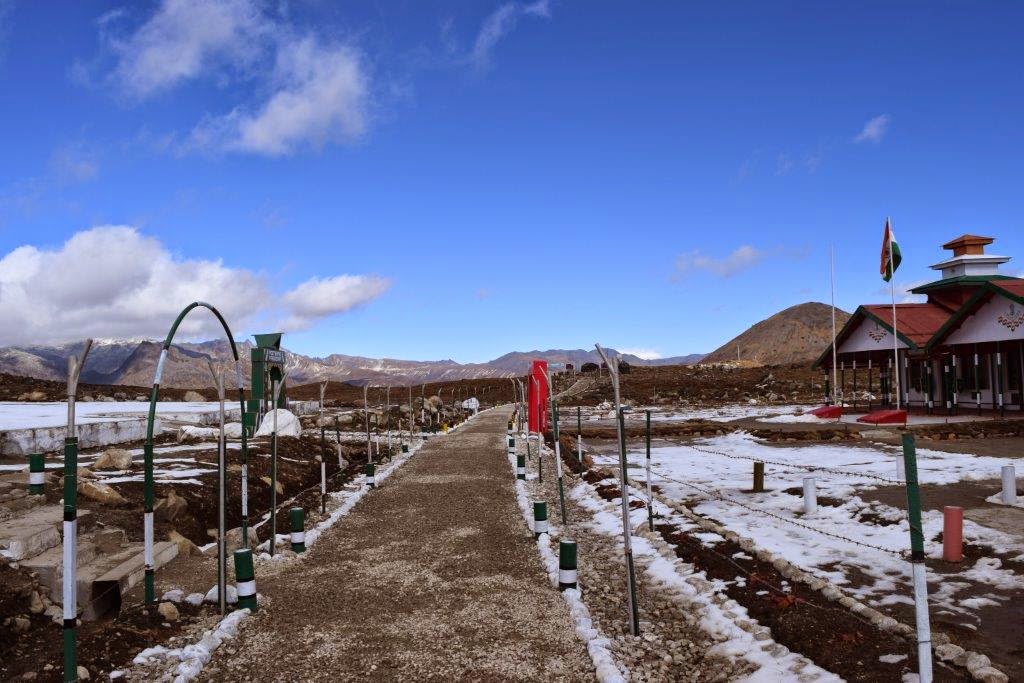 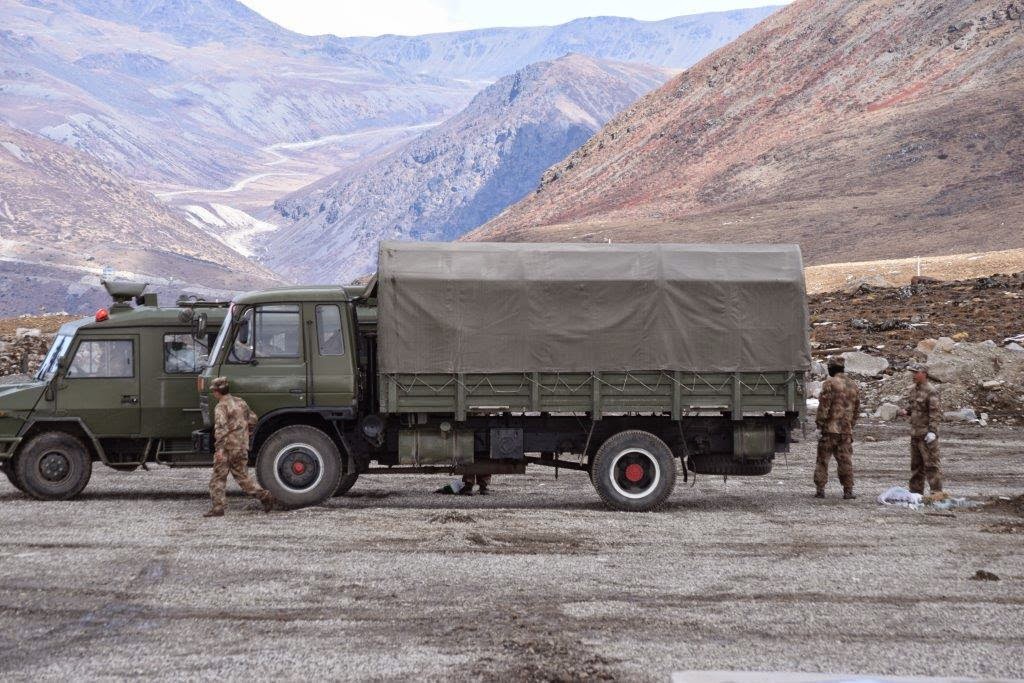 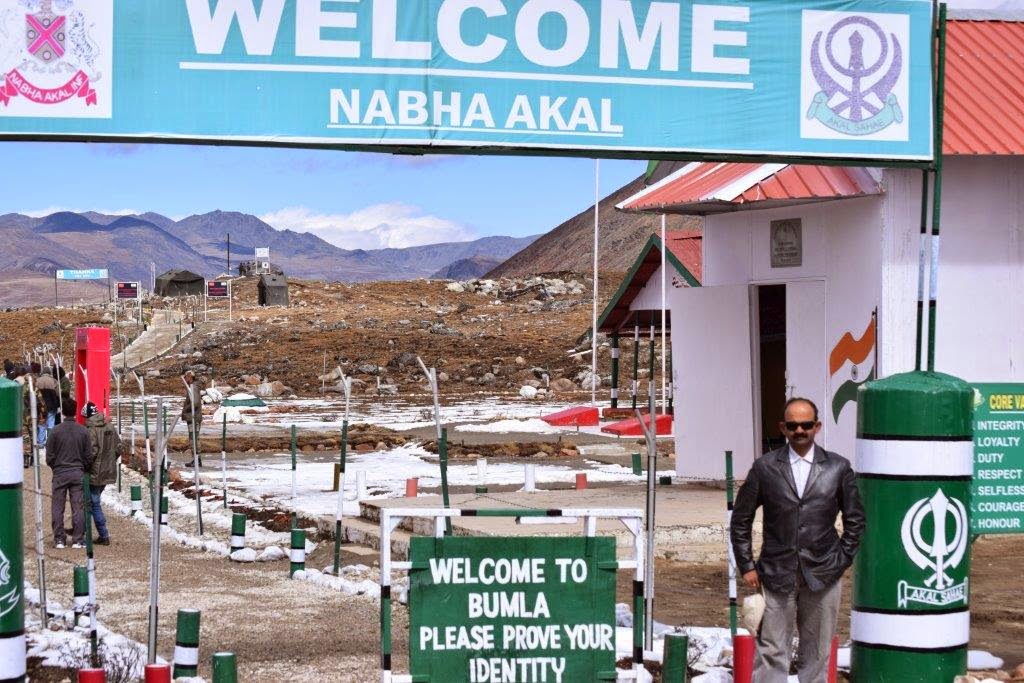 At The Bum La Border

There is nothing to do now but wait fro the return of our group, who report that they had a great visit to the border. I no longer feel disappointed as I also have gained something in the morning; a unique bond of love and affection for this town and its sweet helpful people.

Tomorrow morning, we return back to BomdiLa.