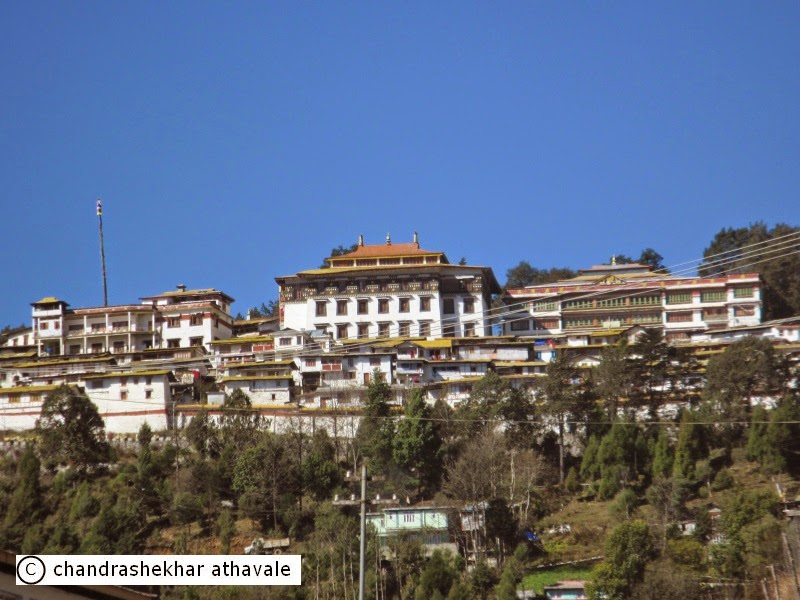 Tawang is a hill station (2800 meters) with a population of about 50000 people; located at a scenic spot bounded by Tawang Chu river in the south and high hills on other three sides. It is the last major town in west Kameng sector of Arunachal Pradesh before India-Tibet border. Like Bomdila, the entire town has been built on flat terraces cut along hill slopes. The town is located amongst number of hills and for moving around one has to go up and down continuously before he can reach his destination. Tawang like many other Buddhist cities in Tibet, is dominated by the 400 year old grandiose Tawang monastery. One can go anywhere in Tawang, he can never miss the monastery situated on the top of tallest hill around. 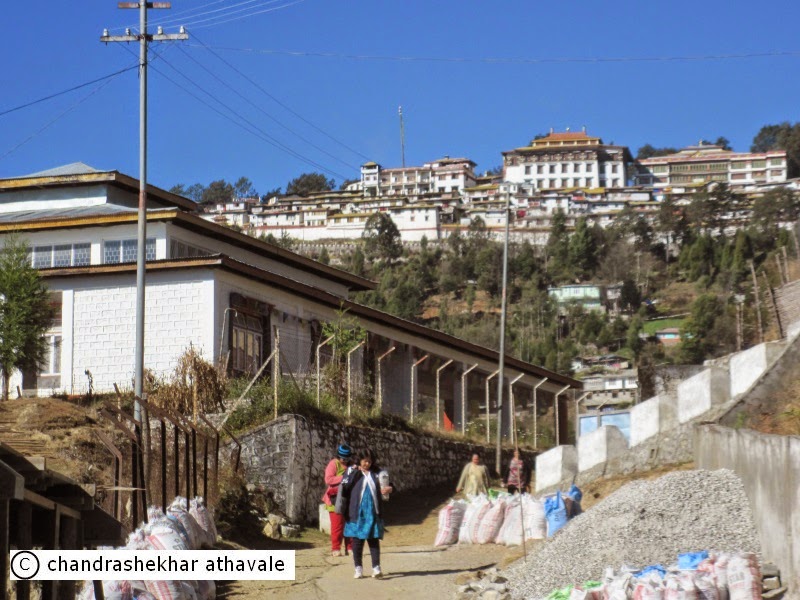 View of the monastery from a town lane

Official web site describes the history of Tawang in these words;

“Tawang is believed to have derived its name from the Grandiose Tawang Monastery perched on the edge of the ridge running along the western part of Tawang township. ‘Ta’ means Horse and ‘Wang’ means Chosen. As the legend goes the site of the present Monastery is believed to have been chosen by a horse owned by Merag Lama Lodre Gyatso who was on a search for an appropriate place to establish a Monastery but was unable to locate any appropriate site. So he finally decided to sit on prayer for guidance of divine power. As he opened his eyes after prayer, he found his horse missing. So, wearily he went out searching for his horse and found it on the top of hill known as Tana Mandekhang where once stood the palace of King Kala Wangpo. Believing it to be a good omen, Mera lama Lodre Gyatso decided to initiate work for building of the monastery with the help of the people. The Monastery thus was founded by Mera Lama Lodre Gyatso in late 1681. However, there is also another belief of derivation on the name ‘Tawang’. The great treasure revealer, Terton Pemalingpa gave initiations such as Tamdin and Ka-gyad and hence the place came to be known as Tawang. ‘Ta’ an abbreviation of Tamdin; ‘Wang’ means Initiation.”

After the long and grueling drive of yesterday, it feels nice that today we would be doing only local sightseeing without much travel. As we assemble outside near the cars, weather is surprisingly warm because of the bright sunshine. Ore first destination is the Tawang Monastery. Tawang, is spite of its remote location, is a bristling town with number of four wheelers zooming about. School children dressed in smart uniforms are walking to school. Most of shops in the town are situated along a single road and traffic is well controlled because of the “One Way” traffic on most of the roads. This means that going even to a place just on an adjoining street, one may need to go around half the town, because the adjoining street may have access only from other direction.

Historically speaking, a report describes Tawang of 1962 in these words;

“Tawang hamlet in 1962 was a well spread-out collection of settlements; the monastery village, the ani gompa (nunnery) ridge, the Political offficer's colony, the Assam rifles and army barracks, the helipad lower down and other scattered buildings. These settlements were dispersed over an area of 5 to 6 Sq. Km.” 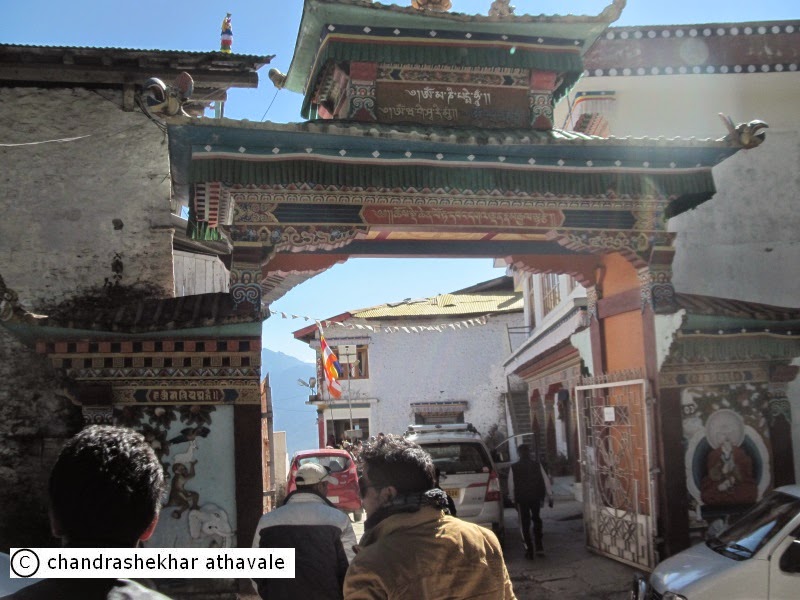 Compared to this description of 1962, Tawang appears to have changed to a modern, more integrated township with RCC construction buildings having all modern amenities. Continuous supply of electric power appears to be a problem though, because during last night, our room heater had gone off on number of occasions. After circling the town, because of one way streets, we start climbing up towards the top of the hill, where the monastery is located. On the top, the parking space is limited and is provided at the northern end. We drive alongside the eastern wall of the monastery, which is about 925 feet long and 10 to 20 feet high. The cars drop us near the visitors gate on western side and drive back to the parking space at north end. We will have to walk down to the parking area after our visit. The gate is painted in true Tibetan style with stone walls on sides, over which a two storied ceiling rests. On either side of the gate, Buddhist religious painting like “ Four harmonious friends” and that of a lama are seen. 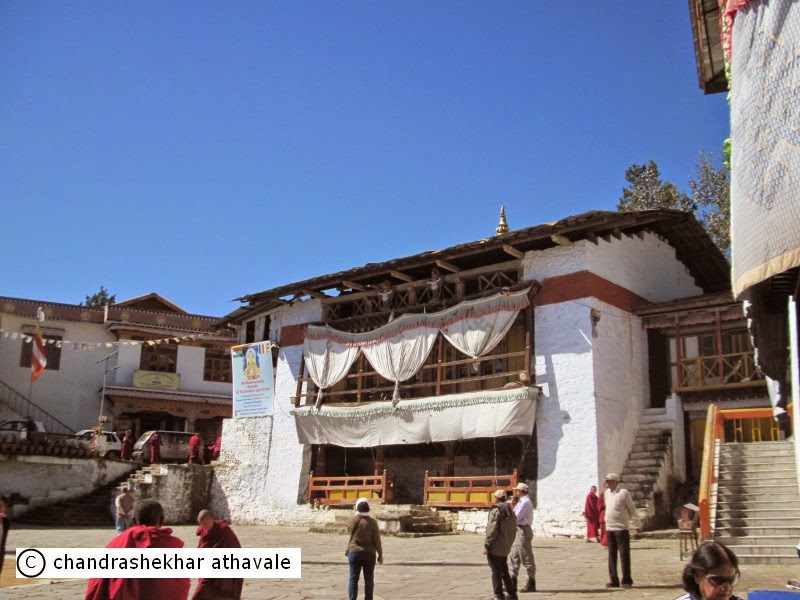 Museum building on left and Library to right 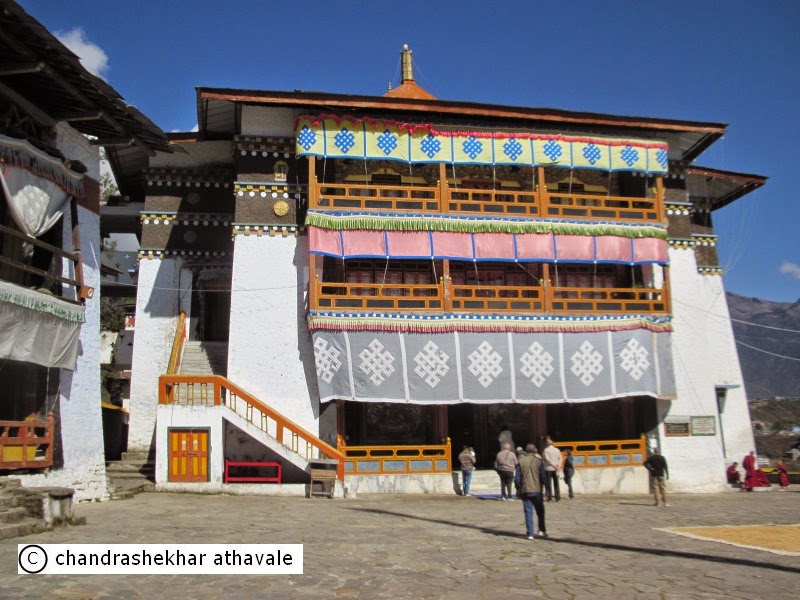 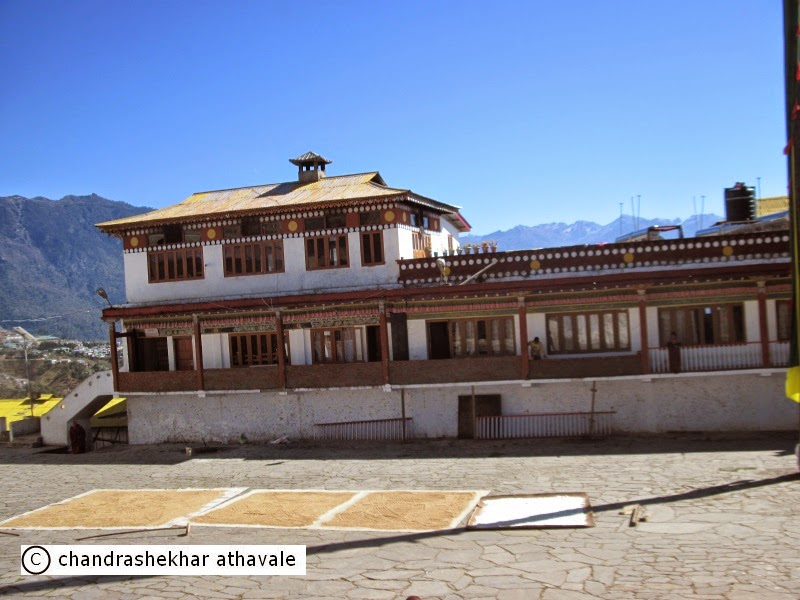 The gate opens into a “L” shaped courtyard. On the right is the monastery museum building. Next to it, but at right angles, is a two storied building that partly is a store for monks' provisions. Straight ahead of the museum building, across the stone slabbed courtyard, that hosts religious dances and other ceremonies held according to the lunar calendar of Monpa, is a three-storied building of the the Dukhang or assembly hall and the 'Labrang', which is the establishment of the Abbot. On the left or on western side of the courtyard, stands an old building that houses the three-storied Parkhang library. Opposite to it, is a two storied structure known as Rhum-Khang. It is used for cooking sacred food on the rituals and refreshment for the monks on festive days. Tawang Monastery, founded by Merag Lodroe Gyamtso in the year 1680 – 81 is the second biggest and oldest monastery in Asia known as Tawang Ganden Namgyal Lhatse. It normally accomodates about 500 student monks of “yellow hat sect.” The residential quarters for the student monks are known as the 'Sha' or hut. These huts, 60 in numbers, are located on a lower terrace on the eastern side. 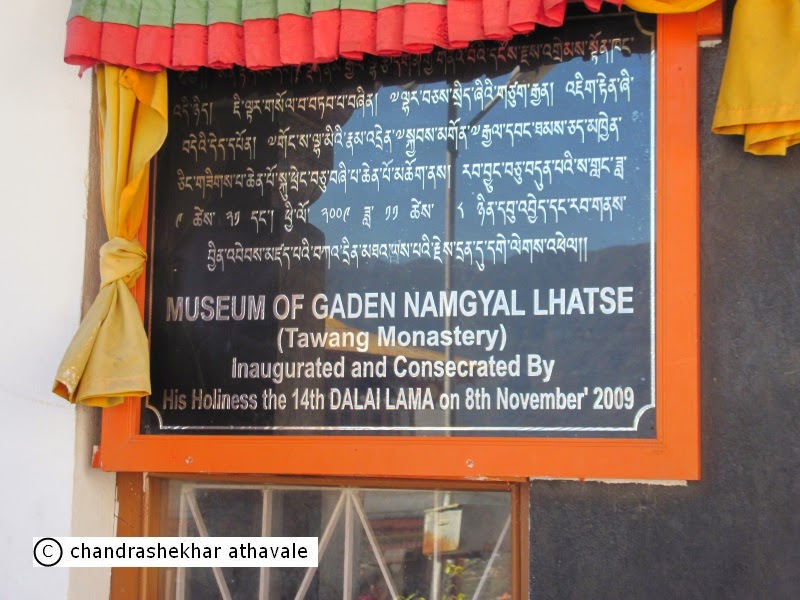 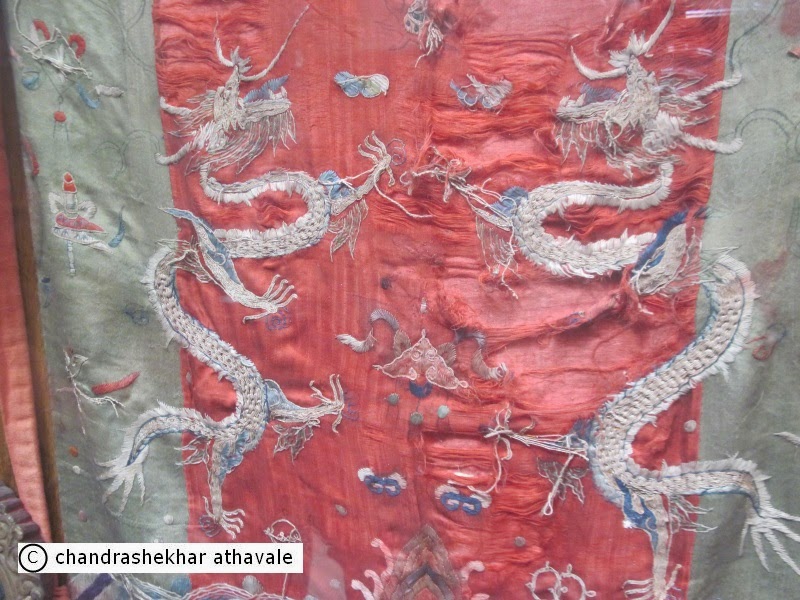 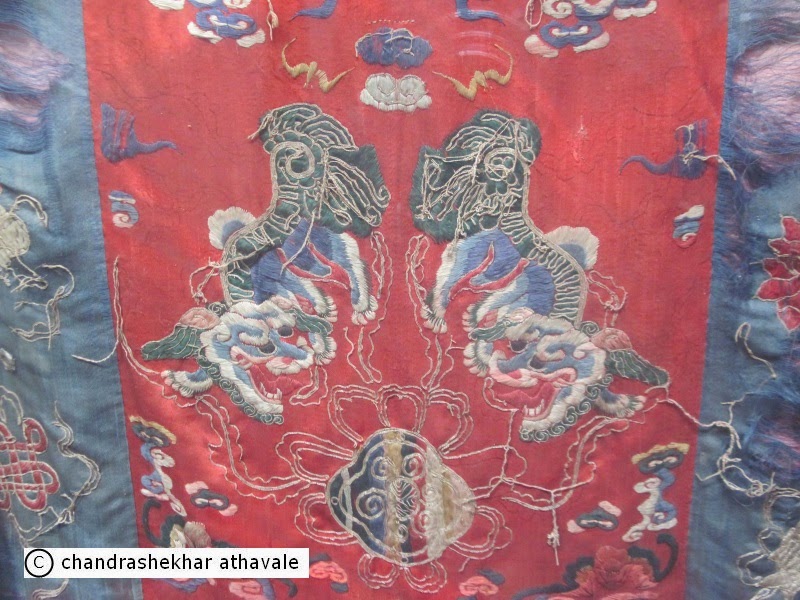 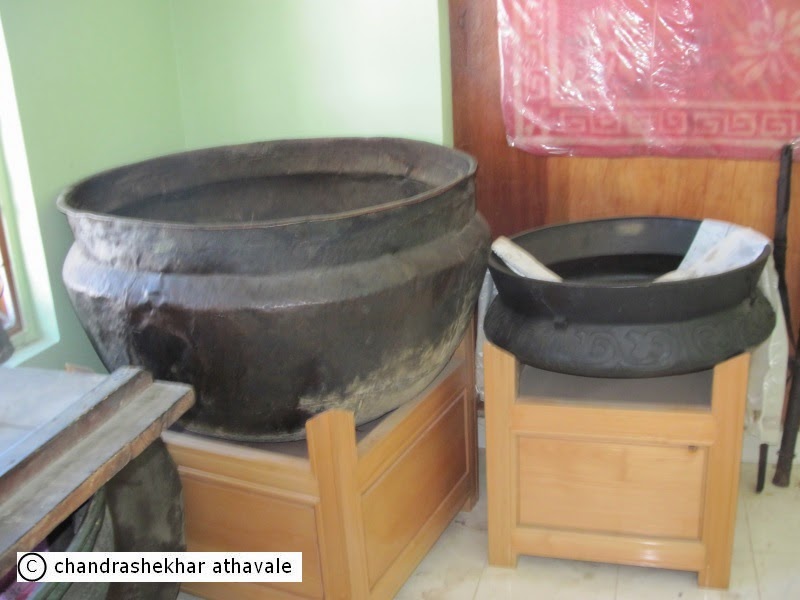 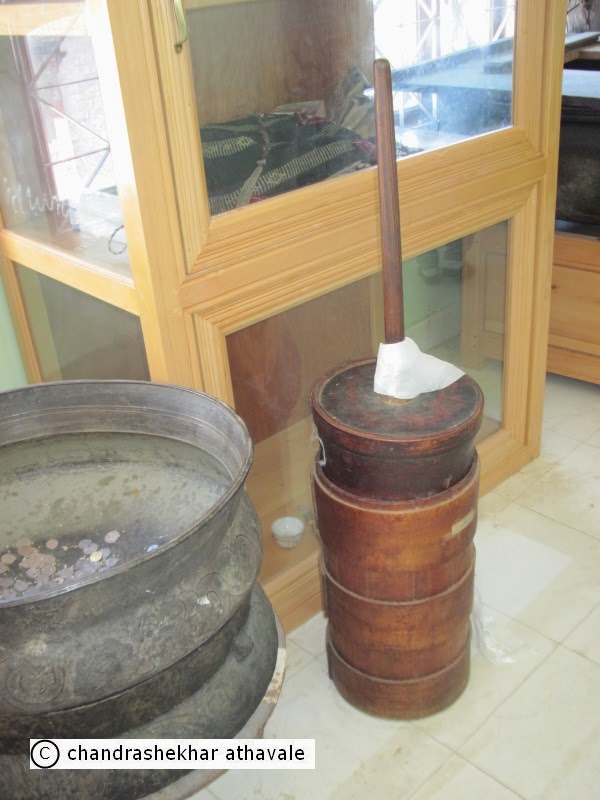 The museum, inaugurated by the 14th Dalai Lama on 8th November 2009, occupies two floors in the building. The ground floor exhibits consists of personal belongings, robes and other ceremonial objects used by various abbots and Lamas in the past. It also has a great collection of brocaded robes and Thangkas. I can see a gilded Chorten fixed with metal panels embossed with Buddist religious figures. The second floor hall exhibits many items used in past in the monastery such as, stamps used for producing embossed panels for fixing on wall of Chorten, steel utensils, churners for the buttermilk produced from Yak's milk etc. The wall are adorned with old photographs. The one that interests me most is the one taken of 14th Dalai Lama crossing into India in 1959, walking down the road in Dirang like a layman. 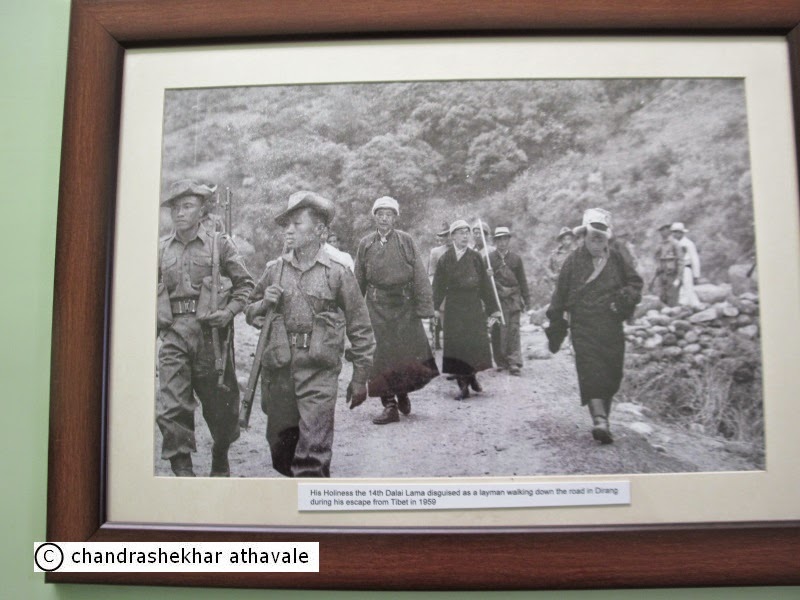 Next I move to the library building. Unfortunately, it is closed, as it is under renovation. The library is believed to have a collection of numerous sacred scriptures and Buddhist texts including a collection of 400-year-old Kangyur scriptures in addition to many other invaluable manuscripts. Other large collections include the sutras, Tangym, Sungbhum, old books and other manuscripts, both handwritten and printed, many of them in gold. Feeling slightly disappointed, I concentrate of the veranda where plenty of construction material is stored, covered with wooden chips and dust. The inner wall of the veranda has two doors on sides with several windows towards the ceiling. I detect some very old painted Buddhist murals, much scratched and covered with dust. Yet the original art still can be seen. The murals remind me of the Ajanta murals. 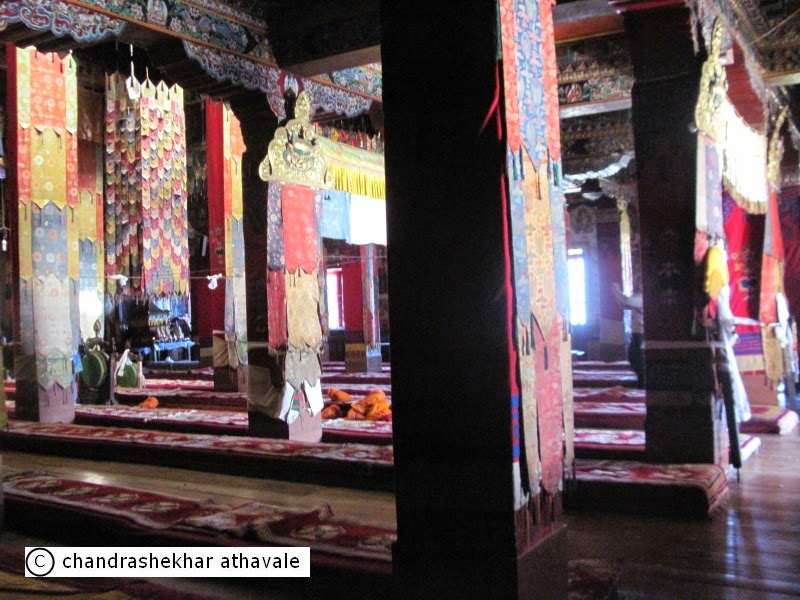 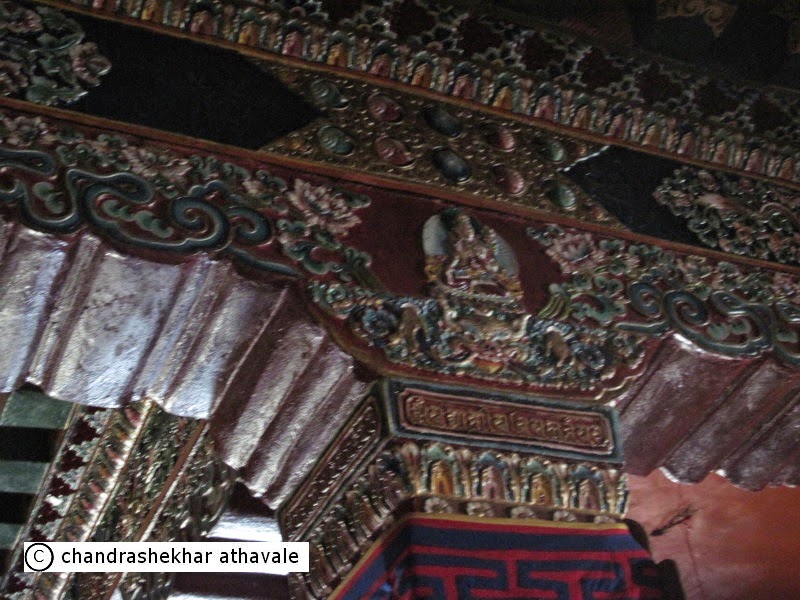 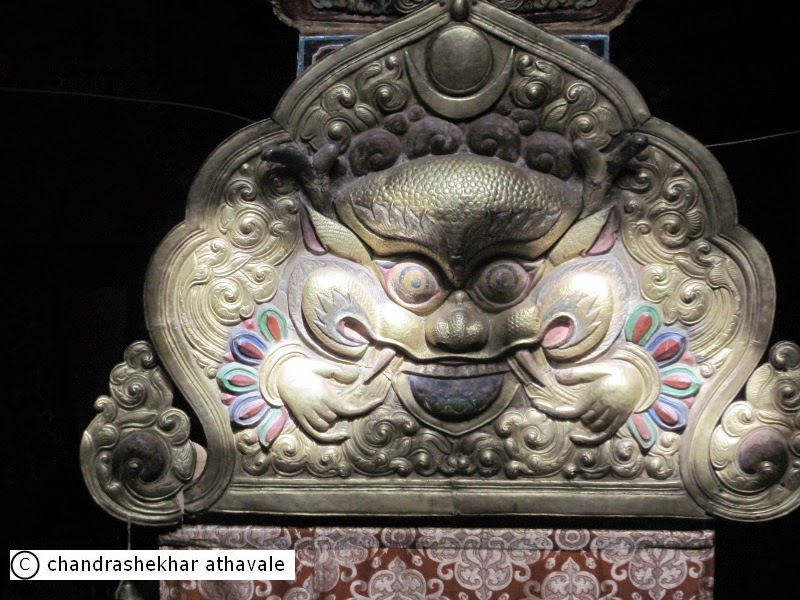 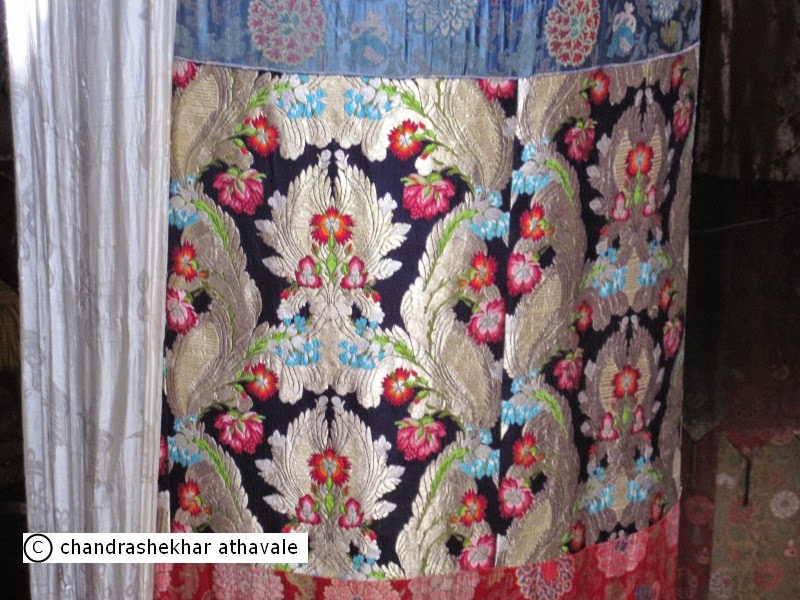 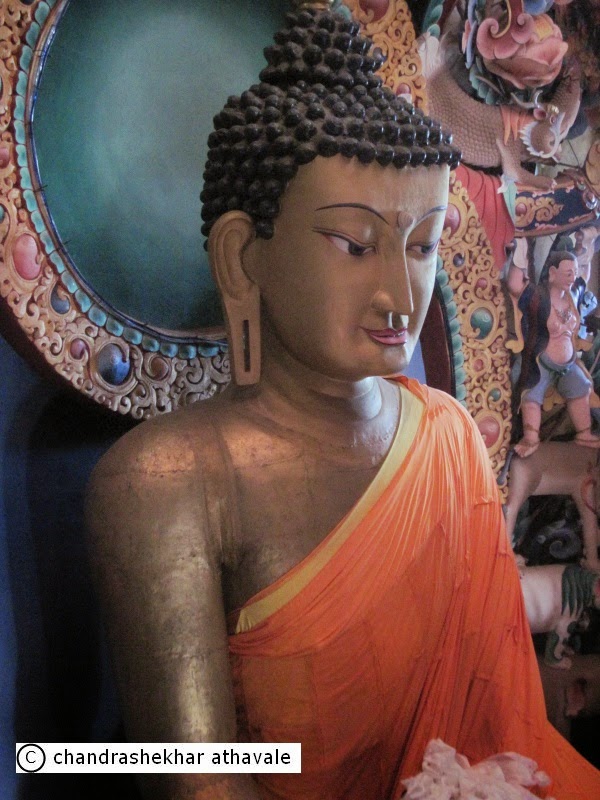 Next to library building is the two storied Dukhang or prayer hall. On the veranda walls are the customary painted figures of guardians of four directions. During last three or four years, I have visited many monasteries such as Hemis, Thiksey, Alchi, Likir, Lamayaru and Hunder in Ladakh and one at Bylakuppe in Karnataka state. As a result, I am quite familiar with the interior of a Dukhang. This monastery is no exception, with its rows of low desks and cushioned seats for monks to sit, ceilings and pillars decorated with banners and Thangkas. The interiors are painted with magnificent works of art. The inner walls have sketches of several saints and Bodhisattvas, whereas the northern wall of the hall is covered with an altar, used for religious ceremonies. On the left of the altar, a silver casket is seen holding the Thangkas. The Thangkas have been dedicated to the chief deity of monastery, Goddess Shri Devi, also known as Palden Lhamo. This Thangka, which was painted with blood drawn from the fifth Dalai Lama's nose, was given to Merak Lama by His Holy Highness the fifth Dalai Lama himself. The Dalai Lama also gave him a painting of goddess Palden Lhamo to be kept in the monastery. A huge 26 feet high statue of Buddha in all its magnificance is seen towards the northern end of the hall. The statue has a begging bowl in the right hand. One can go around the balcony on the second floor and check his skill of throwing a coin in the bowl. Buddhists believe that if you drop a coin in the bowl with a wish, it would be fulfilled. Some of the designs on Thangkas are so exquisite and eye catching that I feel amazed at the worksmanship and artistic flair of the votaries. 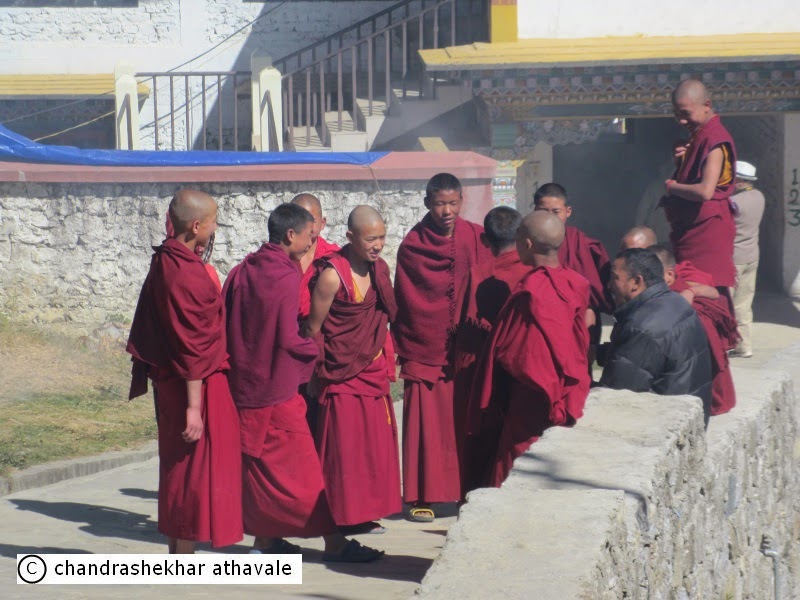 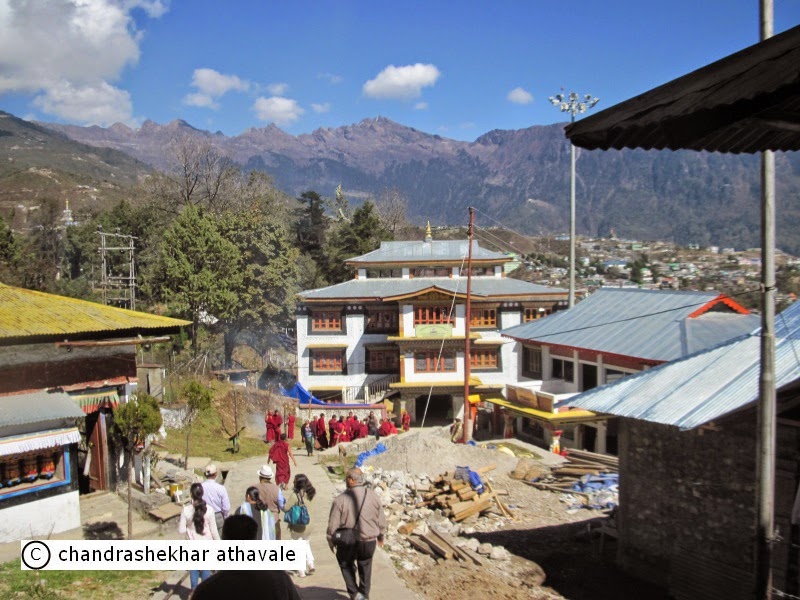 After a rather satisfying visit to the prayer hall, I walk out slowly towards north from the side of the prayer hall building through a small alley with residences on eastern side and a gate, which actually is the main gate to the monastery. On my left is a small shed, where I peep in. There are three small Chorten and one can light a lamp in front of them. I see series of oil lamps lit by votaries, burning in front of the Chorten. Right in front, there is a hut-like structure with walls made of stone. This is called as 'Kakaling'. The internal ceiling of this structure is painted with Mandalas, while the inside walls have been painted with pictures of the saints and divinities. A modern building has come up above this ancient “Kakaling,” perhaps because of the shortage of residential space. Outside there is also a small shop that sells mementos, key chains and other small things. There is also a large prayer wheel again brightly painted 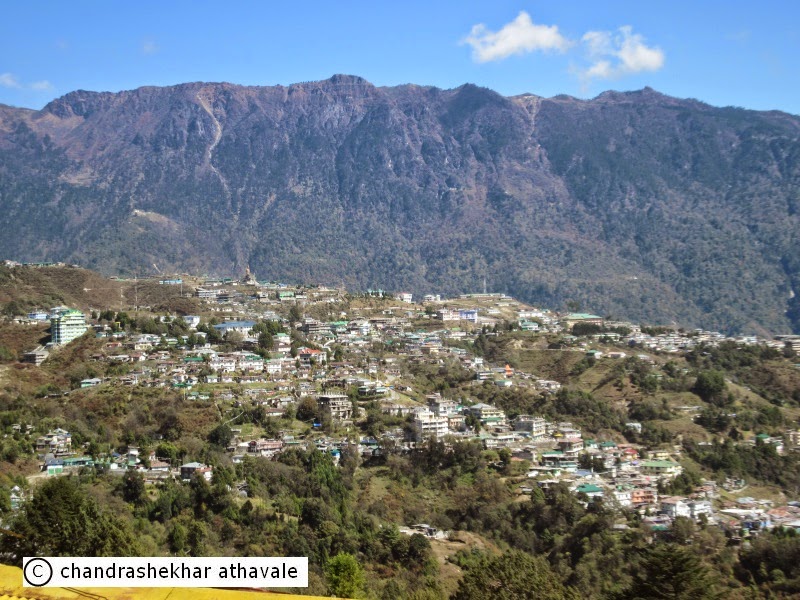 View of Tawang town from monastery

I sit in the waiting car and soon we are off to our second destination of the day; one of the oldest Buddhist nunneries known here as “Ani gompa.” There are number of them around Tawang, but we are headed for one that is known as “ Thukje Choeling nunnery.” Comparatively a new one, inaugurated in 2002 by Lama Tengay Rinpoche. This Ani Gompa is under the control of Tawang Monastery. The Tawang monastery provides for the every day needs of the nuns and their monastery.

( To be continued in Part IV)