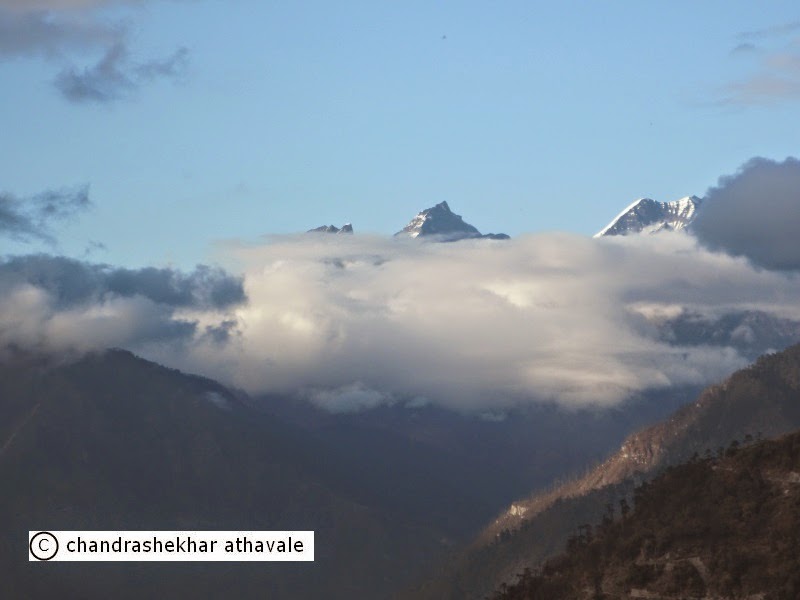 Standing near the entrance to war memorial at “Nyukmadung,” I look around. Nothing could be more pristine and peaceful than this spot. The valley of Dirang river on one side with river bed almost invisible because of the green foliage and trees. Further on the other bank of the river, stands another tall mountain ridge, covered entirely again with foliage. The memorial, built like a chorten or a small Buddhist stupa with a golden pinnacle stands next to a steep mountain slope that comes down and touches other side of the road. Yet on this same pristine spot, a major bloody battle had developed, fifty two years ago, resulting in loss of hundreds of Indian lives. 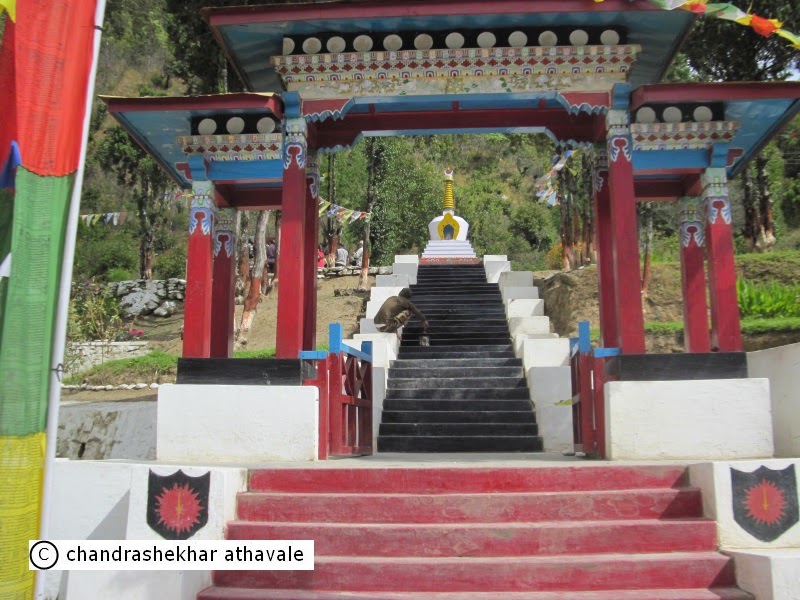 The Nyukmadong War Memorial is located on a specious 1.5 acre plot of land, overlooking the famous battle ground of 18 Nov 1962. It nestles in a three tired terraced landscape with beautiful coniferous trees planted around. The main memorial is in the form of a 25 feet high ‘Chorten’ conforming to the local ethos and traditions. Entrance looks like a main access way, to a monastery, in typical Buddhist style. On both sides of the memorial, plaques listing the names of officers and Jawans, who died here on that fateful day, have been erected. The memorial is staffed by JCO's, who are more than willing to narrate detailed account of the battle. A visit to this memorial invariably turns in such a solemn occasion that every visitor leaves the place with a sad and heavy heart. 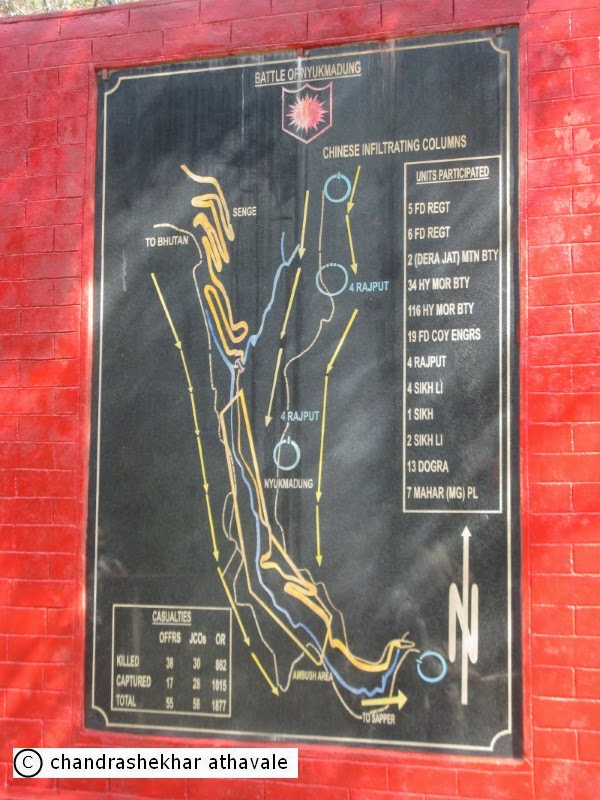 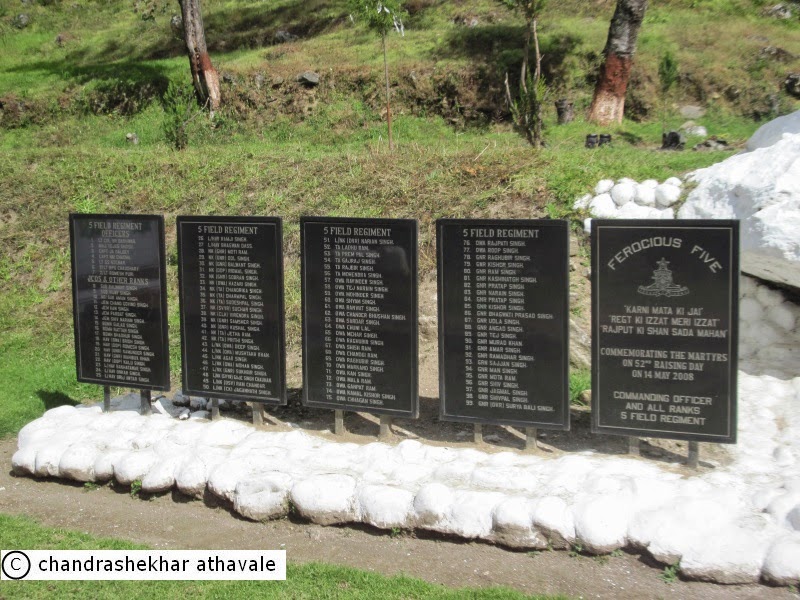 But what had actually happened here on 18th November? Official plaque at the site describes it as a battle, between 62 Infantry brigade, withdrawing from Sela pass and proceeding to Dirang and Chinese infiltrators, who had occupied heights astride Nyukmadong and in which several officers and men of Indian army had laid down their lives. But what happened here was not a battle but a massacre. The commanding officer of the 62 brigade had divided his troops in three columns; one vehicle column and two marching columns. The vehicle column and one of the marching columns were asked to withdraw by the main road that passes through Nyukmadong. When the marching column behind the vehicle column had rounded a bend in the road beyond the village of Nyukmadong around 2 PM on that day, a harrowing sight suddenly came into view. Vehicles, guns and bulldozers lay scattered. The road and the shallow drain running along it were littered with the bodies of the dead and the dying. This was the end of the vehicle column. The marching column itself came under heavy fire from the heights overlooking the road. Soon, the Chinese appeared at the rear also. Efforts to dislodge the enemy failed and by 1600 hours the column was completely disorganized. As darkness enveloped the scene, control was lost and the column disintegrated into small parties. The official Government report lists that 2290 men of all ranks from 62 brigade were missing as on 1 December 1962. Majority of them loosing their lives here in Nyukmadong.

With a heavy heart, I turn back to the car and we leave. Our next stop would be at Se La pass. The Sela ridge is a formidable Himalayan ridge that starts from “Kangto” massif (7000 meters)on India-China border and runs in southwest direction. It forms the watershed between Dirang river and the northerly Tawang chu river. There are several passes in Sela ridge like Tse La, Kye La, Chebra La, Orka La and Yangyap La, besides the most well known Se La. On the Dirang river valley side, Sela ridge takes a shape that looks from air, similar to toes of a foot, with deep river valleys in between toe shaped extensions. The longest toe like extension ends at Nyukmadong, which I have just visited. The Chinese infiltrators had used the mountain track on this extension to come down after crossing the main body of Sela ridge at Yangyap La. 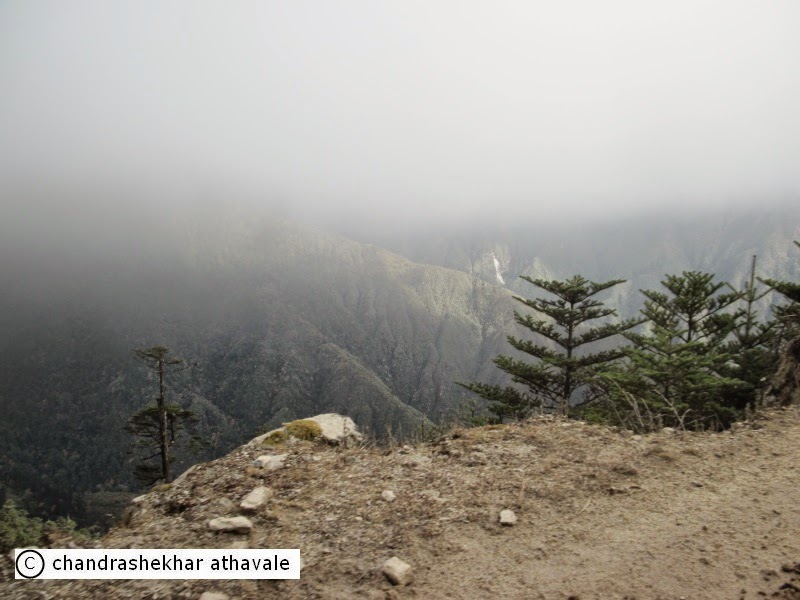 The main road communication link between Tawang and Dirang is highway NH 229. This road ascends towards Sela ridge on another toe like extension of the main Sela ridge, west of Nyukmadong extension. We can call it Senge extension for the name of a village located on it. The whole region is so flush with green vegetation that it is difficult to make out the valley between Senge and Nyukmadong extensions. The only identification perhaps is that on the opposite of the river at this place, there is a small village known as “Dundri.” The road continues along the river bed till 2 Km further ahead from this spot and then turns by 180 degrees to start climbing uphill, towards “Senge” village. 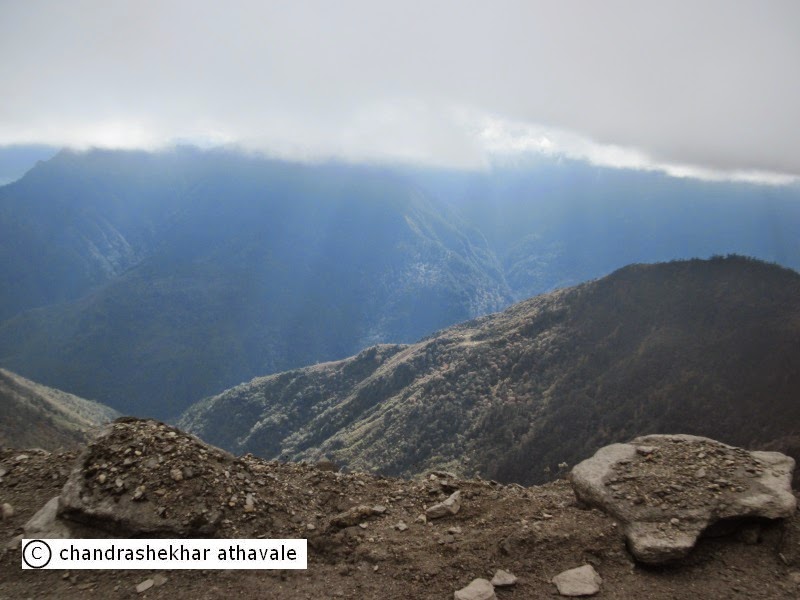 The road initially passes through thickly wooded areas but as our car nears the top, we pass through an area, which appears highly prone to landslides. There are heaps of rock and mud lying on roadside with road repairing work going on continuously all along this stretch. From here onwards to the near-abouts of Se La pass, the entire stretch of the road has military camps belonging to several army units. I see almost continuously, road signs to that effect. 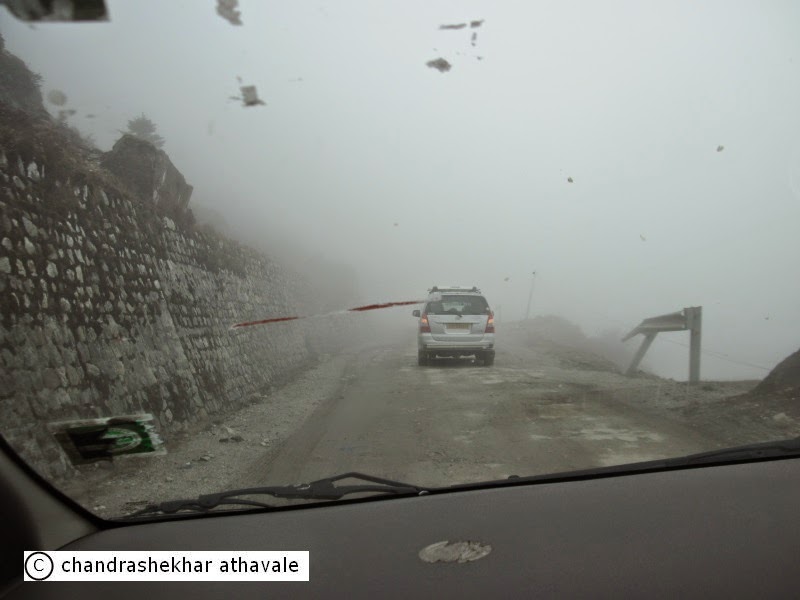 From Dirang to SeLa, the road ascends by an height of about 7000 ft and symptoms of high altitude sickness could be felt on this road. As we climb up the lush green semi tropical vegetation first changes to conifers and in the last lap totally disappears, its place being taken by red or brown coloured high altitude shrubs like “Burtse,” As we near the pass, I see patches and slabs of snow lying on road side and on rocks. The driver mentions that yesterday it had snowed at Se La. Suddenly a dense cloud moves in, spreading a thick fog blanket over the road. Visibility drops to about 25 feet. For next 15 minutes, I witness this fantastic hide and seek between the clouds and the sun. 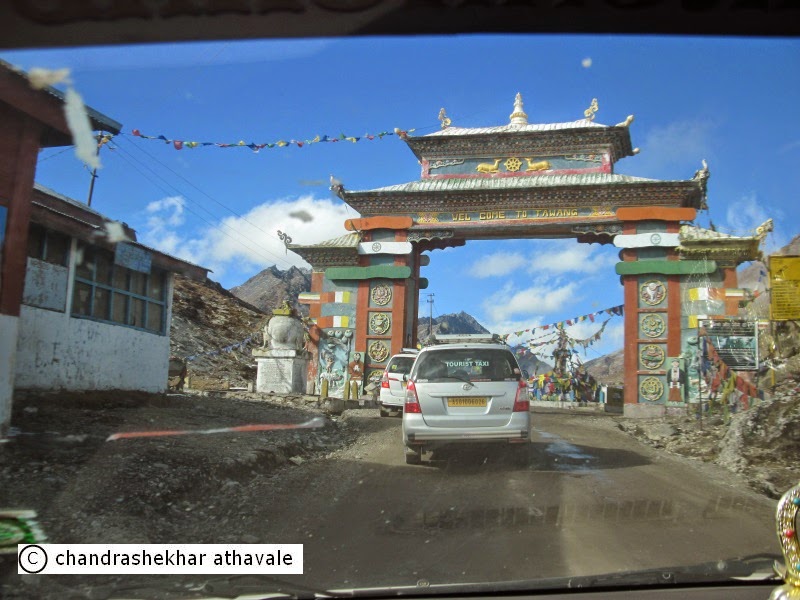 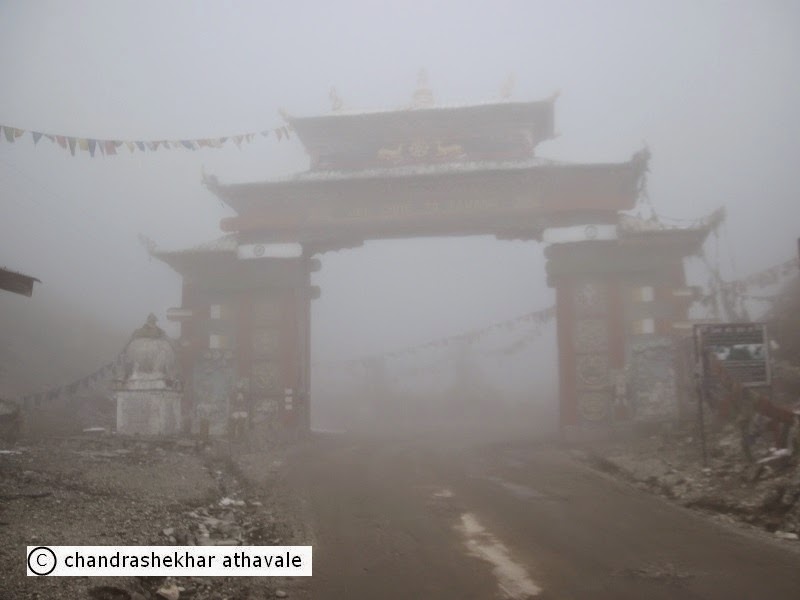 I can see a welcome arch or a gateway erected in the Tibetan monastery style that says “Welcome to Tawang.” Which means that we have arrived at Se La. Travelling through a high mountain pass is not exactly a novelty for me, having done similar journeys through Khardung La (18380 ft.) and Chang La (17580 ft.) in Ladakh. Compared to these places, SeLa is at much lower height of 13700 feet. Yet the thrill of standing at the highest point in a journey is no less satisfying. The cars stop and we all get out. It is quite chilly here. I put on my winter jacket. Even then, the biting cold breeze makes me shiver. 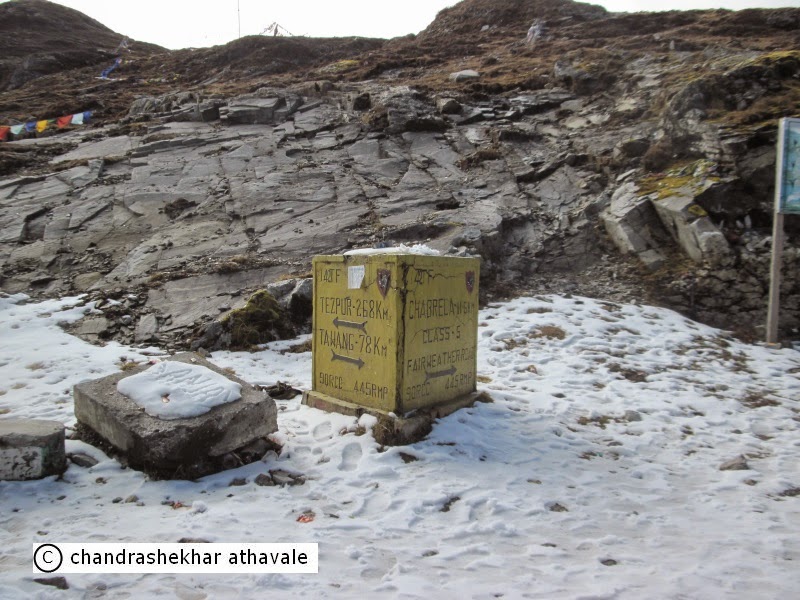 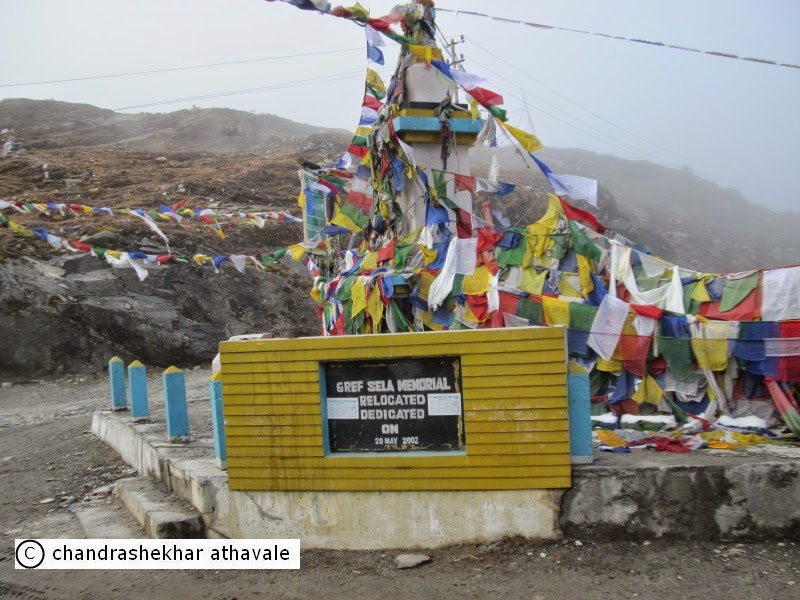 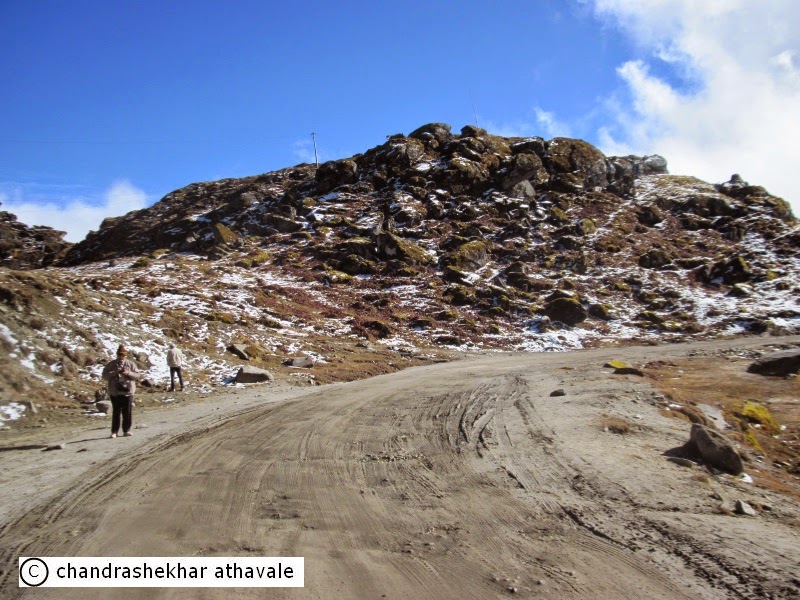 Se La looks quite different from passes in Ladakh, though there are similarities too. All these passes are totally barren and devoid of any vegetation. Se La is however unique in the sense that there is a large natural lake at the top known as lake Paradise. This lake totally freezes in winter. From the welcome gate, two roads branch off on two sides of this lake. Road on the left bank goes to “Chabre La Pass” towards Bhutan and the one on right bank towards Nuranang-Tawang. 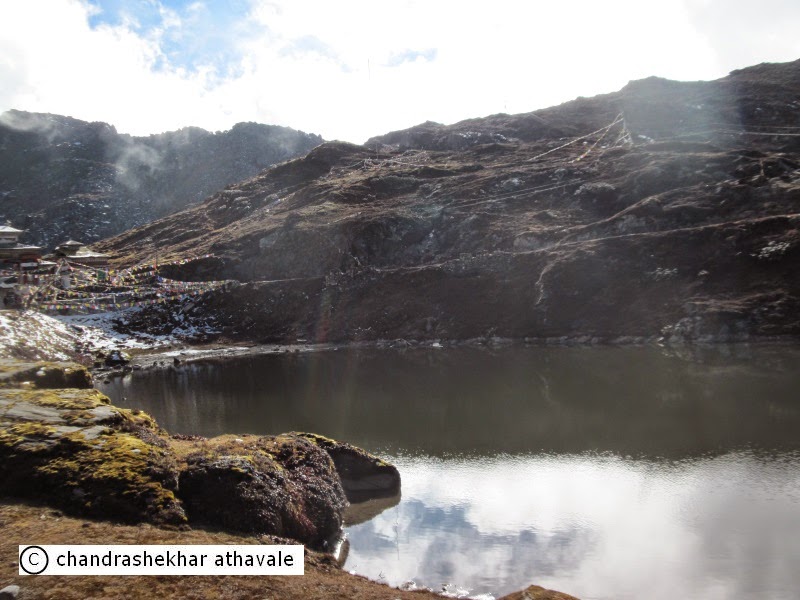 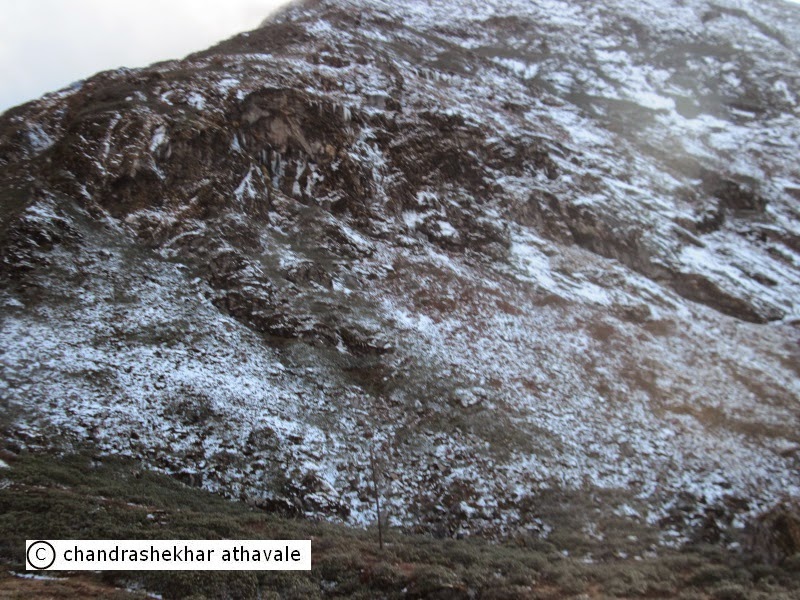 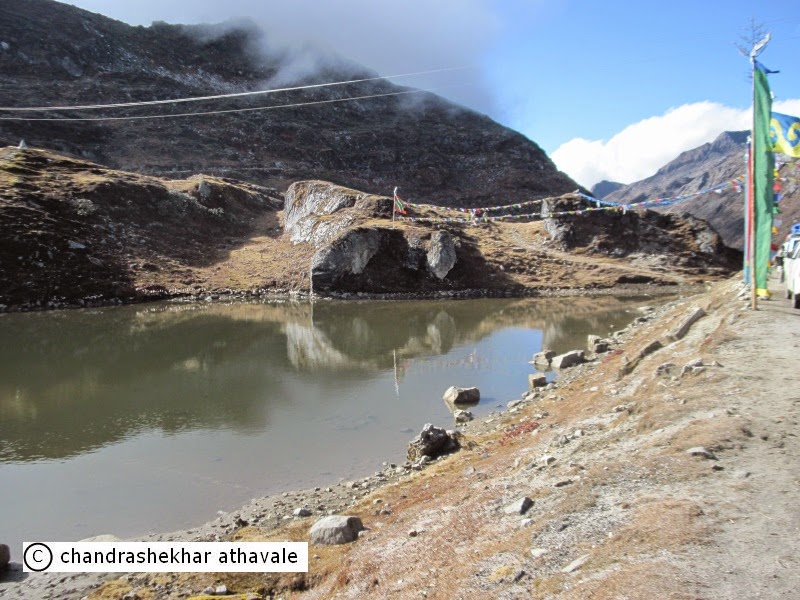 I start walking towards the gateway arch. On either side of the pass, stand two tall massifs with snow covered peaks. The massif towards left is just next to the pass, whereas, the one on the right is at some difference away. A jagged rocky peak, much shorter in height, stands between the massif on right and the pass. Its black colour reminds me of a heap of cooled down slag, removed from molten steel and dumped on a side of the steel melting furnace. White slabs of ice lay scattered everywhere, on the hills and on the roadsides. 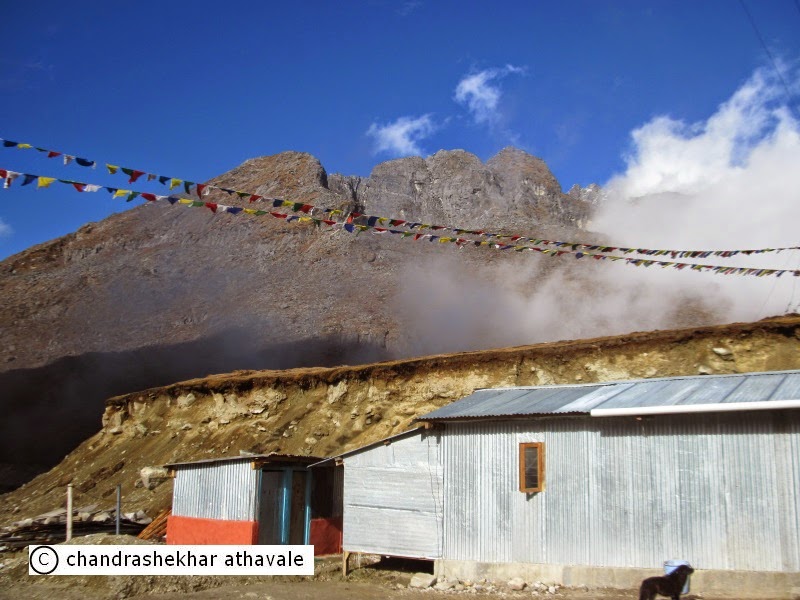 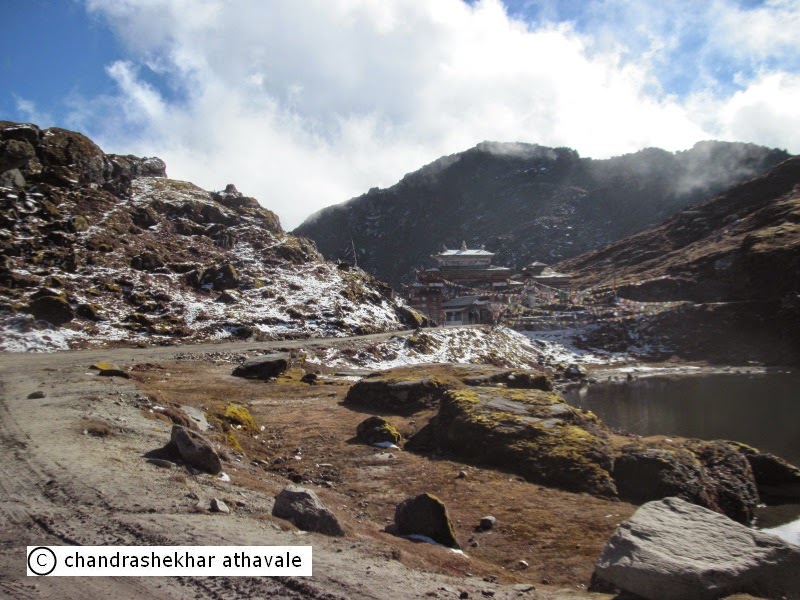 There is a small shed by the side of the road, that serves light snacks and tea. We decide to break here for lunch. To enjoy a piping hot meal, in the biting cold of Se La, is an unique experience that just can not be described in words. After lunch, we reluctantly leave the picturesque pass and start descending. The paradise lake length along north south is much more than its width. There is supposed to be another lake east of Paradise lake, but it is difficult to see from road, because of high ground, standing in the way. Surprisingly, I see another large body of water, west of the lake paradise, almost in continuation, that is not mentioned anywhere in the travel literature. This body of water is not connected to lake paradise and is distinctly at some distance away from it. This body of water appears to have been newly created by authorities, because on the western end, a constructed bund can be seen. This possiblly could be a water reservoir for use of residents, living in this area. 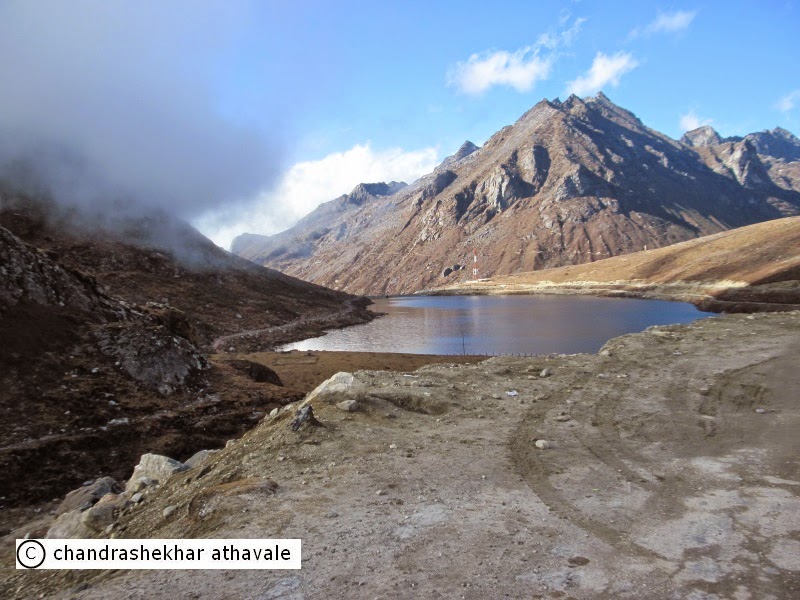 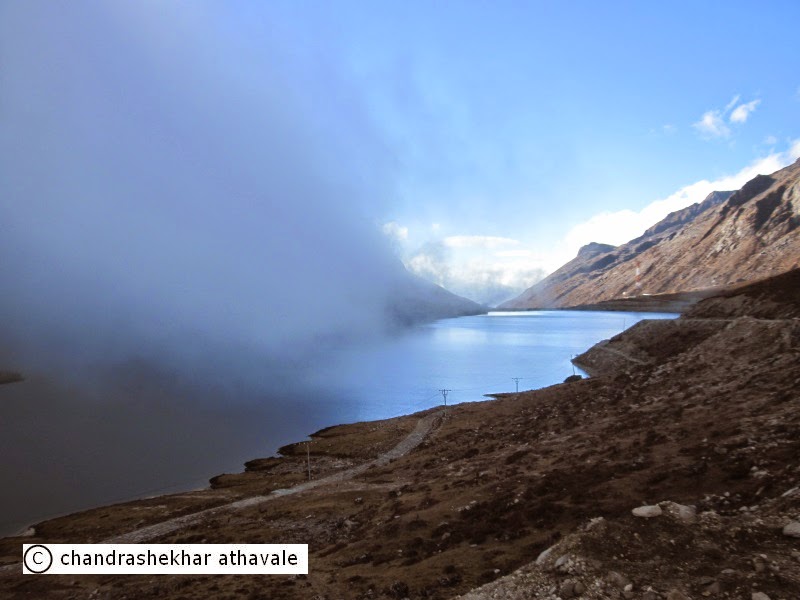 As we come down the slope, I see again the reddish “Burtse” shrubs everywhere, on mountain sides and in the shallow valley. In fact they are the only vegetation that is around. The road is fairly dusty and if you are following a car, expect lots of dust in the air. The road continues for few Kms on the right bank of a small river, which I believe is Nuranang Chu. I continue to see many huts but it is difficult to differentiate whether they are villages or army camps. After about 3-4 Km the river valley starts deepening and green foliage appears again on hillsides. There is a steel bridge, which we cross and continue on the other side of the river valley, which is deepening and constricting more and more for every Kilometer. After travelling about 10 or 12 Km, the cars stop at a parking place. I see number of army sheds with roofs painted in camouflage colours. We have arrived at another war memorial. The name of the place is Nuranang, now changed to Jaswantgarh.

( to be continued in part VII)