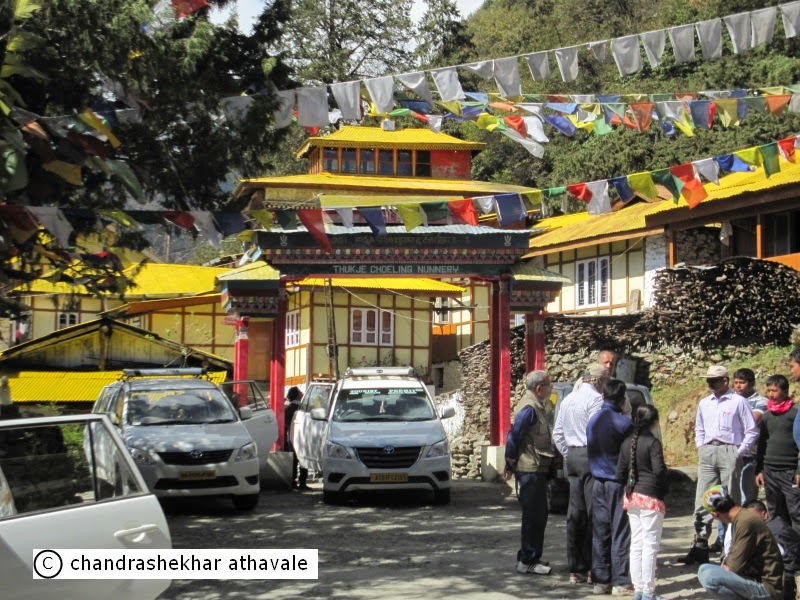 “ Thukje Choeling nunnery.” popularly known as Ani Gompa is located on a hill top, quite isolated from the Tawang town. The road passes through number of military establishments before it starts climbing up to the top. There is not much parking space available at the top and our flotilla of 8 cars is barely accommodated there. There is a customary welcome arch made from two wooden pillars and a horizontal beam, painted in a typical Tibetan way. There are number of small sheds with tin roofs painted with yellow colour. There is only one two story building, which must be the Dukhang or prayer hall. 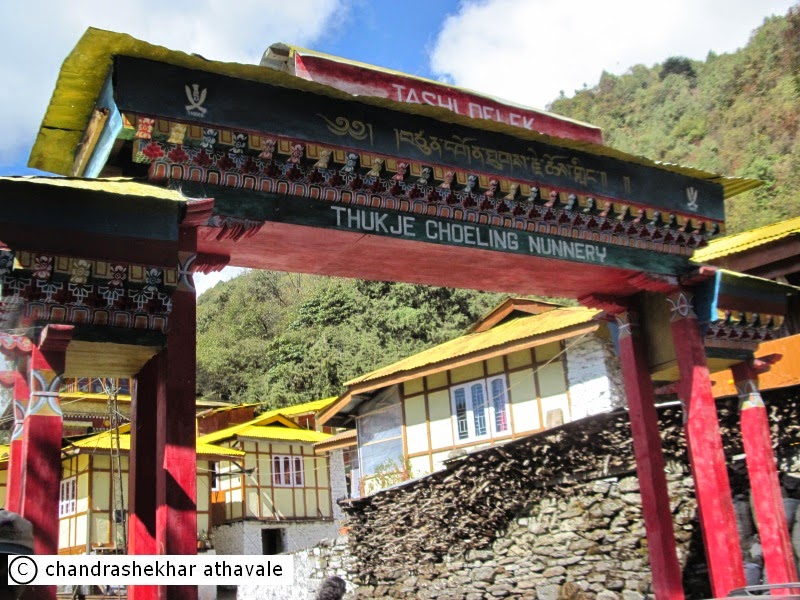 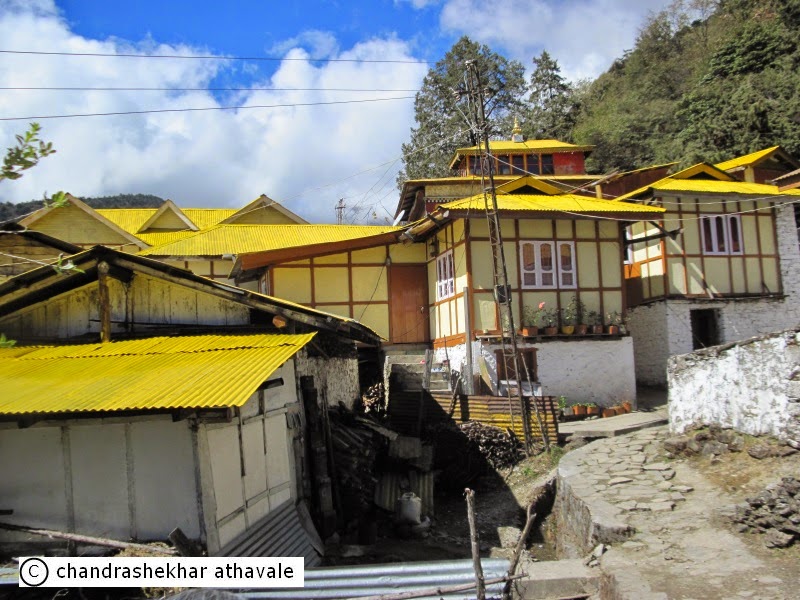 I walk through the narrow path between the sheds. Ahead is the small wooden water wheel, which might be being used for grinding grains or some such task. The frames of window panes are painted bright orange with delicate flower design on the sills indicating a feminine hand. The Dukhang again is quite small but has delicately painted door frames and beams. A few nuns wearing maroon robes are seen doing some work. Prayer hall has a pillared veranda and the inner veranda walls are painted with bright coloured murals of Buddha and the the four guardians of directions. The reigning deity inside is “Tara,(also known as Jetsun Dolma)” who is a female Bodhisattva in Mahayana Buddhism. Tara is actually the generic name for a set of Buddhas or Bodhisattvas of similar aspect. The deity here is specifically known as “Green Tara,” known as the Buddha of enlightened activity. 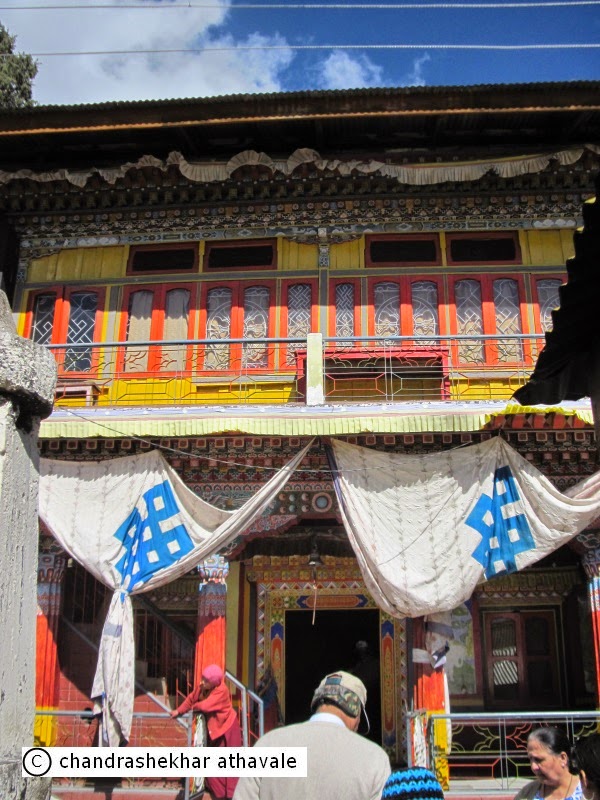 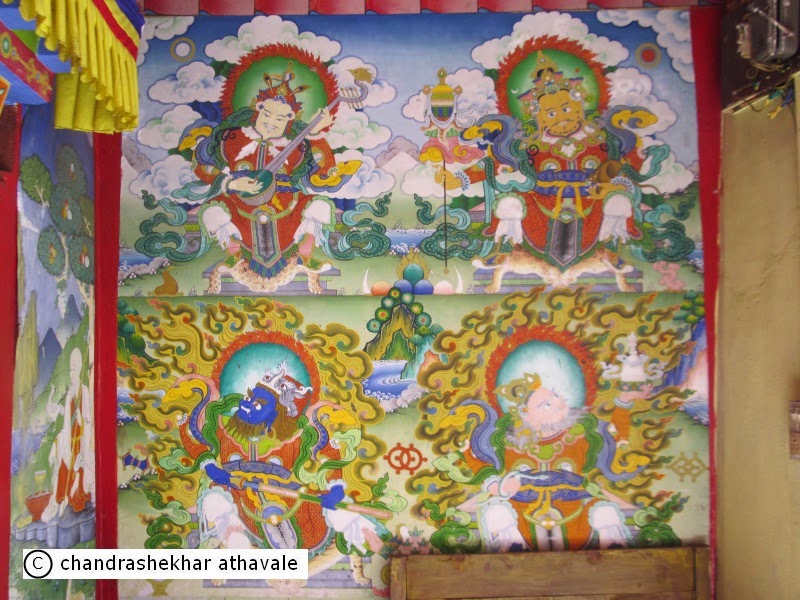 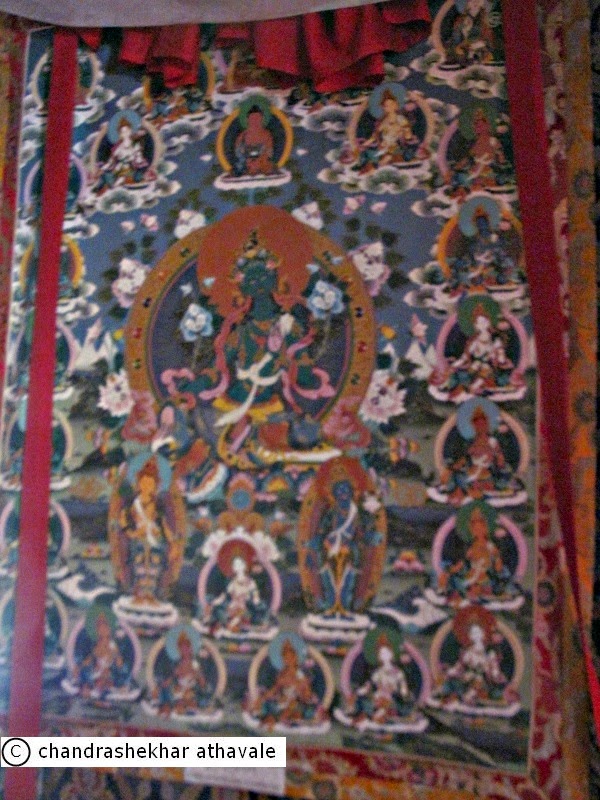 A large sized statue of the deity is seen behind a glass panel along with framed photographs of monks. Both electric and oil burning lights are lit before the deity. There are several Thangkas hanging on pillars and walls, some with figures of all avataras of Tara with the green Tara occupying the central position. Another one is painted with a figure of Buddha. I come out in the court yard. With the bright sun light outside, it is quite cosy and warm outside. Bright red chillies and some kind of cheese are being dried up in the sunlight perhaps for the incoming harsh winter. I request the nun standing there to let me taste the cheese. It tastes kind of tasteless. It is actually Cheese made from Yak milk. 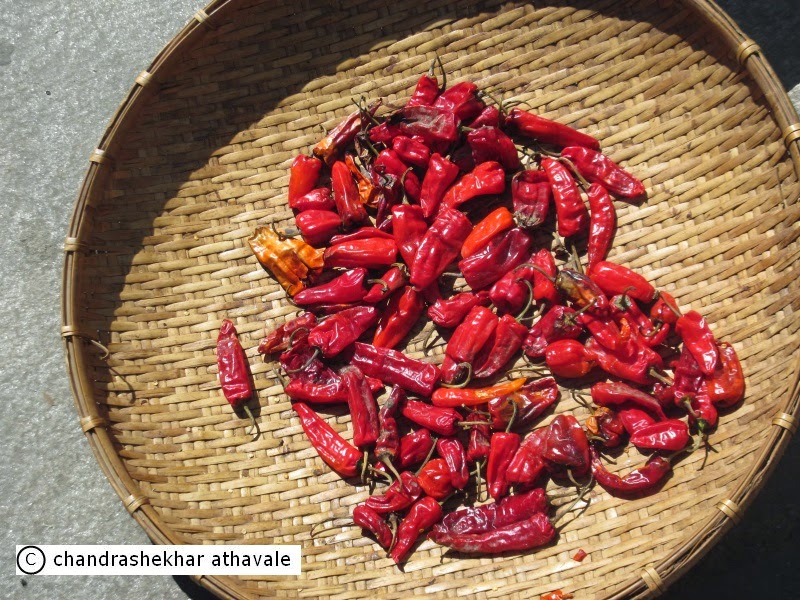 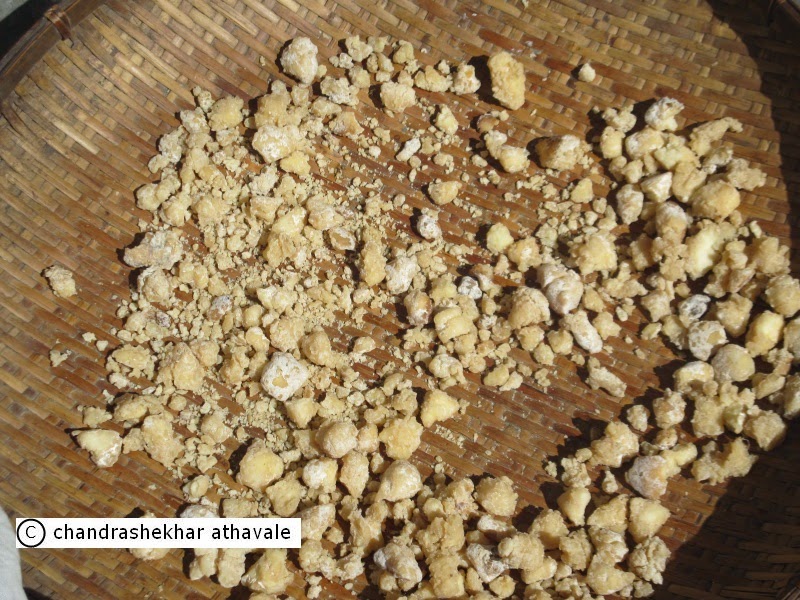 Quite impressed with the dedication of the nuns, I walk out to the car. Our next halt is in the town market. Surprisingly contrary to my expectations, I find no smuggled Chinese goods here. Tawang market is just like any other Indian town market on the tourism citcuit. Curios, mementos and items of general use. There is a separate vegetable market. We return to the hotel for lunch and some rest.

By late afternoon, we are back on road, this time to visit one of the most important and not to be missed spots in Tawang; the Tawang war memorial. After the 1962 war, a memorial was first erected near the village of Lumpo situated on bank of Nyamyang Chu river in Zemithang circle of Tawang district, to honour the dead, who had sacrificed their lives in the battle of Namka Chu river. However, because of the extreme weather conditions, this memorial soon turned into a dilapidated state. In 1990's army took up the construction of a befitting grand memorial in Tawang town itself within the premises of garrison stationed in Tawang. The 40 feet high terminal has been built at the cost of 15 hundred thousand Rupees on a slope just before one enters the town within premises of garrison known as “Korea Brigade.” It was blessed by Dalai Lama himself in 1997. The memorial, locally called ‘Namgyal Chortan’ was dedicated to the nation in 1999. Though the memorial has been designed by army, help of hundreds of monks along with locals and government officials was taken to keep with the local religious sentiments. The vault of the memorial has idols of Lord Buddha, scriptures, ornaments, jewels, valuables and other items deposited by the people including holy scriptures and idols of Arya Avlokiteshwara and Lord Buddha sent by Dalai lama, which have been personally blessed by him. 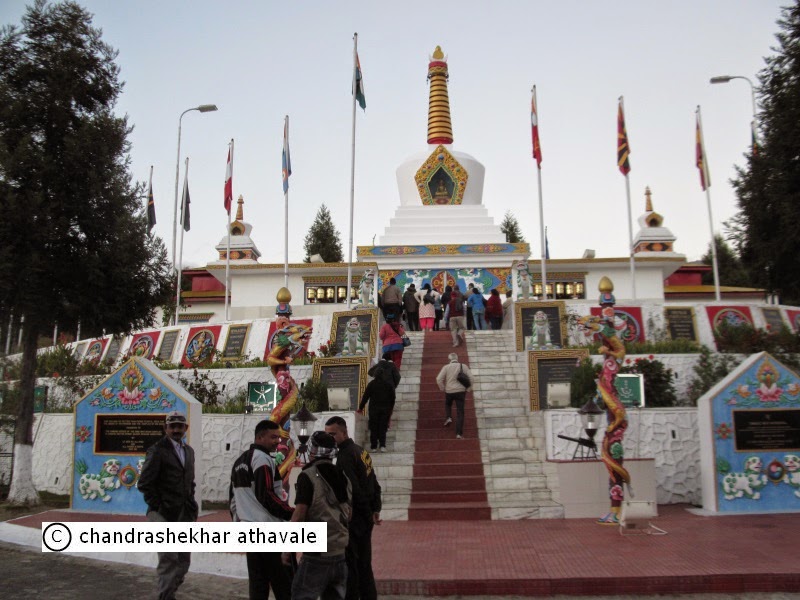 The car stops on a large parking ground and we walk to the site of the memorial. The imposing structure has been built like a large Stupa or a Chorten. There is a 3 step outside wall, semicircular in shape. On the flat surfaces of the steps, flowering shrubs have been planted in the flower beds specially created there. I can see some lovely roses there. The vertical walls are painted white along with symbols of various army units that took part in the battle, painted at regular intervals . To go inside, one needs to climb about 20 to 25 steps, where an elevated circular path exists that goes around the Stupa. On both sides of steps, 4 numbers of marble lions, sculptured in Tibetan style have been placed on top two steps. On top of the topmost step, 9 flagpoles stand on which Indian tricolour and flags of army and air force units flutter in the wind. 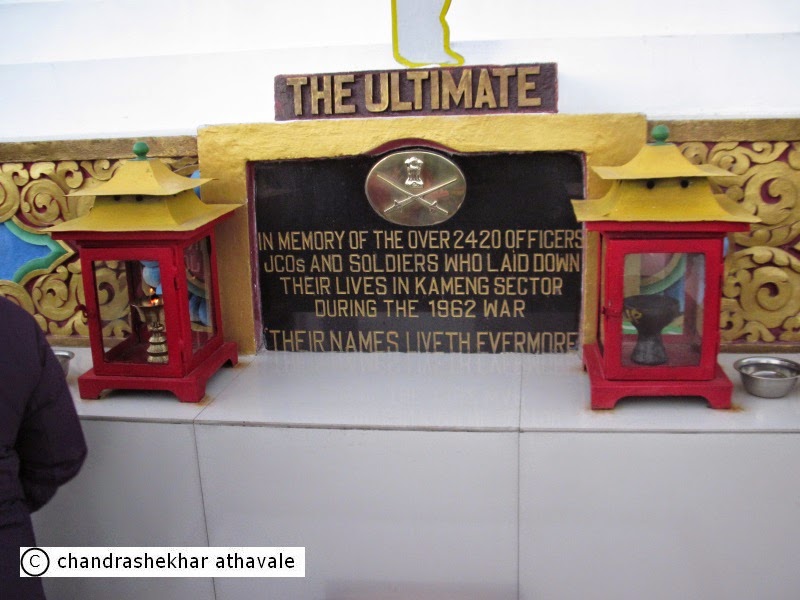 The Stupa proper has a stepped peripheral wall covered with marble stone slabs. Fixed on this wall and facing the steps is a granite legend plate with two oil lamps burning on the sides. The legend plate reads as under:

On both sides of the legend plate, a sculptured frieze with Buddhist motifs extends all the way around the Stupa. Above the stupa dome, there is a recess, in which a Buddha's image has been kept. A red and gold coloured pinnacle stands high up above. At the rear of the Stupa structre, two wings consisting of memorial halls have been constructed. These halls also have red and gold coloured pinnacles on top. The walls facing the front have recesses in which gold and red coloured Buddhist prayer wheels have been built. The walls of the halls on both sides are lined with black granite plates on which names of all 2420 martyred officers and men have been etched in gold. 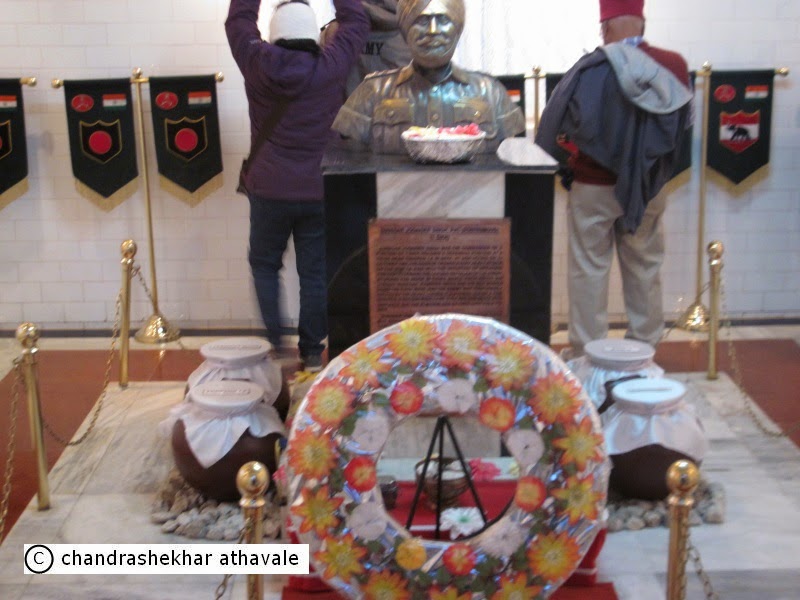 I am quite sure that most of the readers would be taken aback and mortified to find that army had lost more than two thousand men in course of this one month long war that saw real action only for 7 or 8 days. To analyse the reasons of such horrific losses, we must briefly touch upon some historic and geographical details, which I propose to do later. 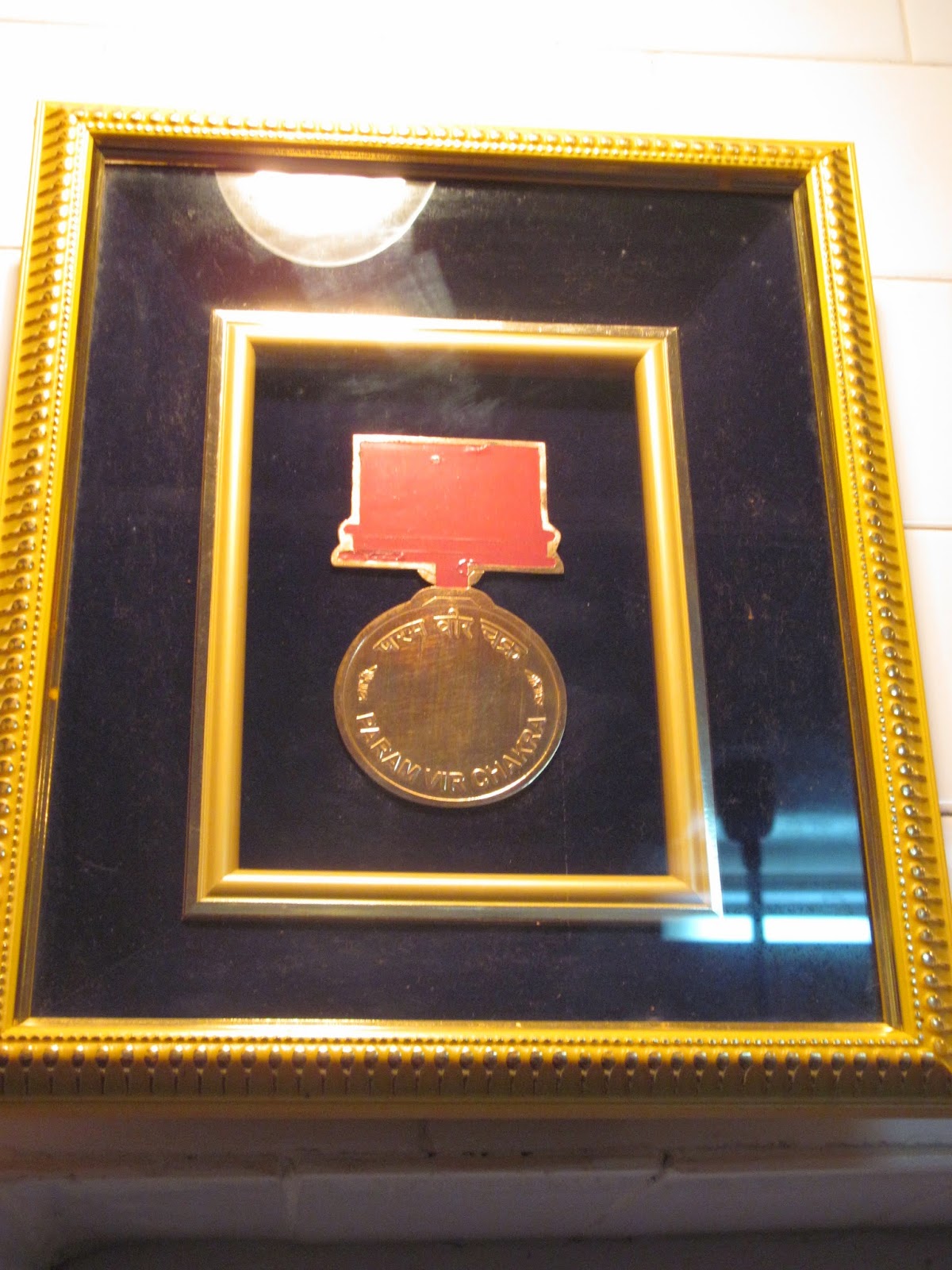 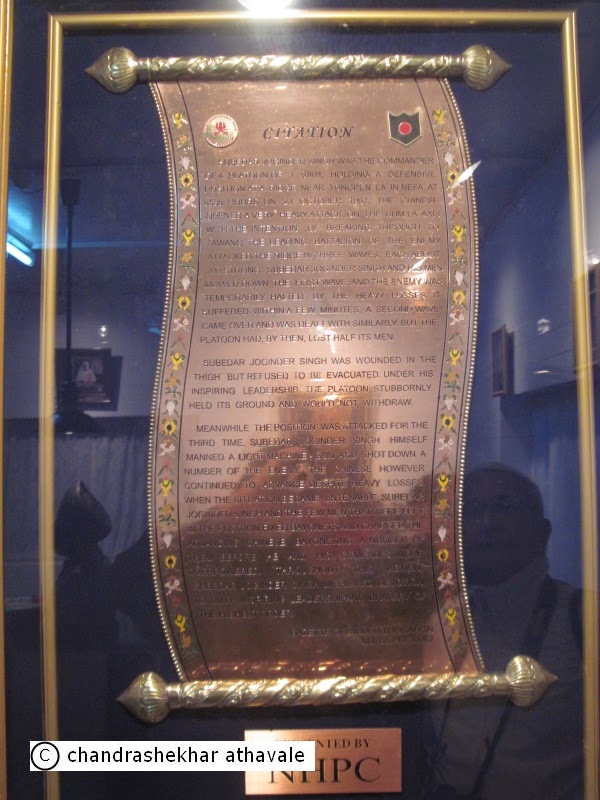 I start walking from left leading to the rear memorial hall. At the center of this hall, A pillar covered with granite and marble stone plates has been built. A bust of an extraordinarily brave soldier; Subedar Joginder Singh has been placed here. At the base of the pillar, I can see flowers and other Buddhist religious items placed neatly. A circular flower wreath stands in front. On both sides of the pillar there are four earthen pots with their mouths covered with pure white cloth pieces tied around the neck by a string. On the covering cloth pieces, names of four places have been written in large black letters. These places are Jaswantgarh, Tonpeng La, Bum La and Zimithang. The pots actually contain loose earth or soil from the battle fields from these four places, where battles of 1962 were fought and many Indians had sacrificed their lives. The walls of the hall are adorned with citations, replica of the “Maha Veer Chakra” awarded to Subedar Joginder Singh and banners of all army units that saw action in 1962 war here. 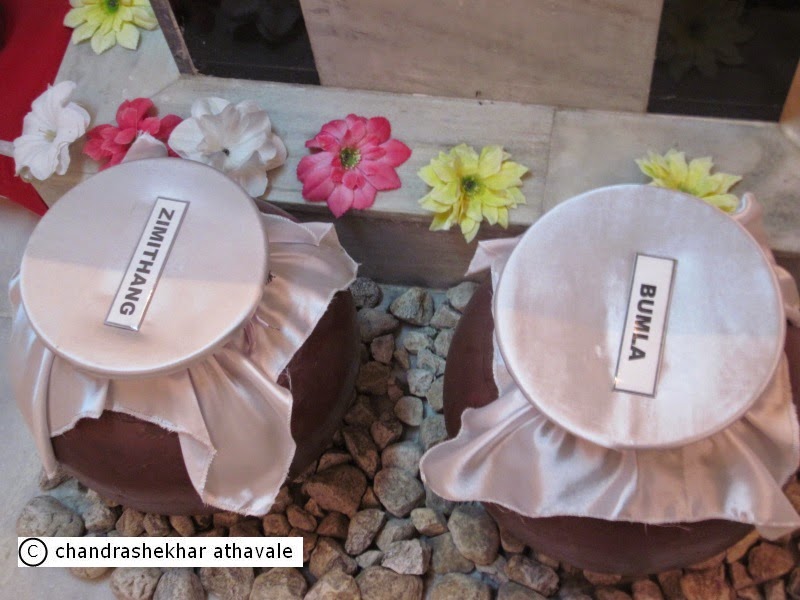 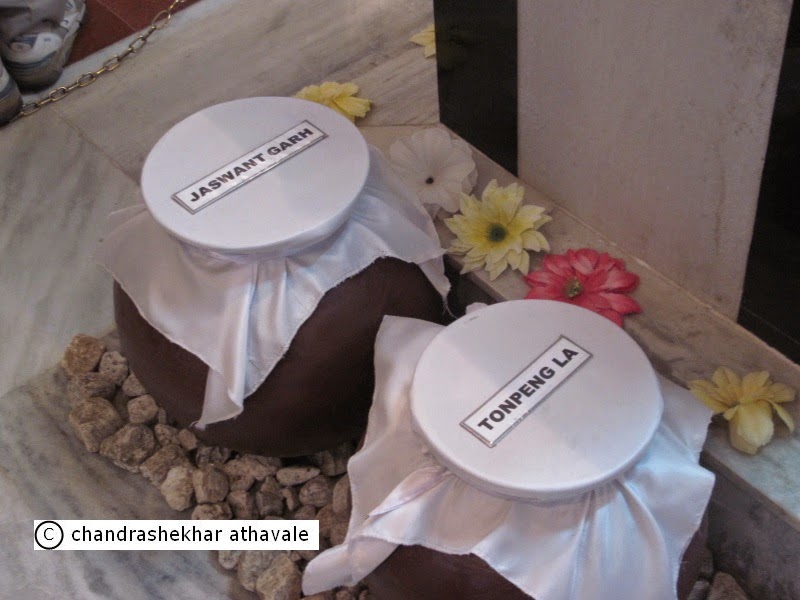 On the opposite side is a larger memorial hall that displays a 3 dimensional map of Kameng sector, labeled with names for ridges, rivers and places where the battles were fought. On display are several photographs, weapons and personal effects of soldiers like helmets, mugs and rifle bullets used in 1962 war. A JCO, again from Maratha Light infantry addresses us, giving us details about the battles, reasons for India's defeats and the situation on border now. He suggests that we must visit the border and see how normal and calm the things are. He emphatically suggests that we should not really believe in what they show on TV, which mostly are some old video clips from record and form an impression that India-China border in Arunachal is not quiet. He also explains the difference between LOC; Line of Control and LOAC; Line of actual control. According to him out of 1126 Km length of India-China border in Arunachal Padesh, 1106 Km of border is well defined LOC, that follows the geographical features ( McMahon line) . Only 20Km of border on the western end, where this border line meets the tri-junction point between India-china and Bhutan is still ambiguous and is called as LOAC. Particularly heart touching is the fact narrated by him that in the 1962 war here, there was only one rifle and 12 bullets available for three soldiers, whereas Chinese soldiers had semi automatic and automatic weapons.

I walk out of the hall and we assemble in the front. Everyone in the group is in solemn and sad mood. Someone suggests that we should sing national anthem here. Before we could begin. Before we begin it is pointed out that protocol says that we should not sing it after sunset. In two minds, we stand steady for two minutes with eyes closed paying our homage to brave soldiers, who had sacrificed their lives in this far off remote corner of India. We all slowly walk back to the foreground.
Behind the war memorial, army has built a large open air amphitheater, where they hold a light-n- sound show every evening. We assemble in the viewers gallery waiting for the show that is likely to begin in another 30 minutes or so.

My thoughts naturally return to the 1962 war and the horrific loss of more than two thousand brave soldiers of India. As I mentioned above, to analyse the reasons for this terrible loss, we must go back to 1962 and find out what actually happened here.

( To be continued in part X)