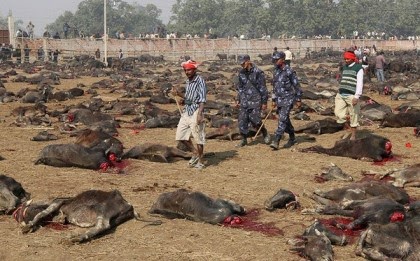 In the Vedic religion, prevalent in India from 1200 BCE onwards, sacrificing animals at a fire altar was very common. There is no clear evidence available, whether Harrapans from Sindhu- Sarswati culture from prior periods, followed any such traditions. Later, with advent of Buddhism from the middle of the millennium before our era, Vedic ritual of sacrificing animals had continued unabated even when more popular Buddhism abhorred violence, .

In the year 2010-11, Archaeological Survey of India carried out excavations at Kondapur, a village in Andhra Pradesh state. The excavations brought to light religious practices of people living in Deccan at the beginning of our Era. The main discovery at the excavation site included some brick structures found in the western extreme of the main mound, which yielded authentic evidence of a Vedic or fire worshipping sect. It was a vast complex having a circular shrine facing south with one entrance and surrounded by rectangular chambers and fire altars , three metres in depth, having 37 courses of burnt bricks of different shapes -- triangular and sand clock-shaped, behind the chambers. The whole temple complex yielded plenty of animal bone pieces, perhaps for sacrificial purposes and related pottery articles such as bowls, sprinklers, spouted vessels and iron implements like spear heads and knives. The kings obviously performed the ‘yagnas’ at these altars and sacrificed animals to propitiate the goddess or seek a male heir. 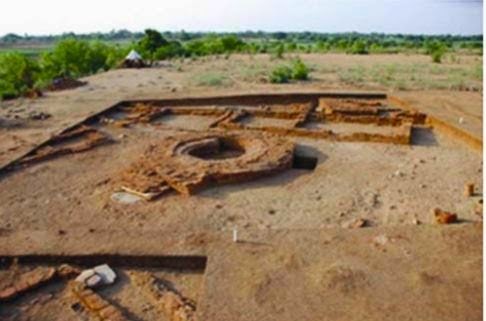 In 1960, Government of India passed an act called as Prevention of Cruelty to animals act, under which slaughtering of animals except in authorised slaughter houses was banned. Legally speaking, animal sacrifice is illegal. The act of animal sacrifice is covered under local Municipal Corporation Acts, Prevention of Cruelty to Animals Act, 1960, Wildlife (Protection) Act, 1972 and the Indian Penal Code (IPC). The courts in India have always taken a harsh view of practices such as animal sacrifice. In a judgment given in 1995, Supremne Court of India stated that Slaughtering of a cow On Muslim religious festival of Bakrid is neither essential nor necessarily required as part of religious ceremony.

The situation in Nepal; India's northerly neighbour, however remains totally different and diametrically opposite. Nepal officially considers itself a Hindu nation and allows animal sacrifices to any quantitative level. Gadhimai Temple located in Bariyapur village in Bara District of south central Nepal,( very near India's border) is a temple of a sacred goddesses of power. Here, at the Gadhimai festival, the world's biggest animal sacrifice is conducted once in every five years. 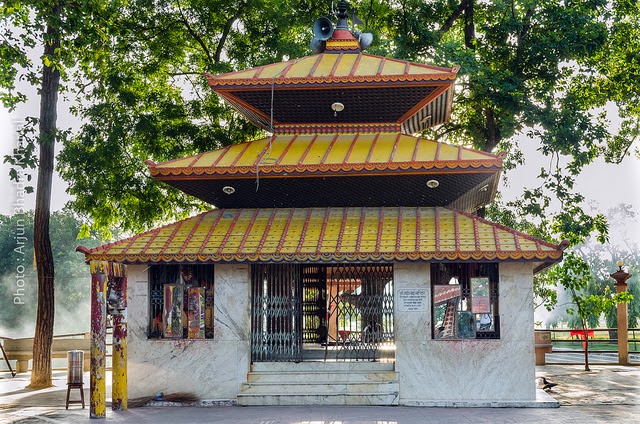 Readers may find it difficult to believe but some 2.5 million worshippers from India and Nepal sacrificed 200,000 animals such as buffaloes, goats and pigeons to Gadhimai,the Hindu goddess of power here last week. There is a legend that the first sacrifices in Bariyapur were conducted several centuries ago when Goddess Gadhimai appeared to a prisoner in a dream and asked him to establish a temple to her. When he awoke, his shackles had fallen open and he was able to leave the prison and build the temple, where he sacrificed animals to give thanks.


The animals are killed by having their heads chopped off or throats slit in such a horrific way that any sensible person after having seen this would be down with terrible nausea and vomitting bouts. The animals are brought to an open field and killed with a machete. The view would be reminiscent of a battle ground of medieval periods with thousands of dead animals lying on ground instead of dead soldiers and the soil having turned red with blood of animals. The scenes from last week's carbage are so horrific that I do not even wish to publish any photos here.

It would appear that this year's figure of 200000 animals sacrificed is acutally modest compared to 2009 figure of 300000 animals. This reduction has happened because of an order by Supreme court of India to ban on Gadhimai-related animal exports of animals. The court asked the police to patrol the border and stop worshippers from taking buffalo and goats across to the temple. As a result of this, many devotees were unable to cross the border with animals for sacrifice and there was a considerable decrease in the number of sacrifices this year.

It is obvious that courts in India, having no jurisdiction in Nepal. can not not ban this slaughter. However, it is totally in the jurisdiction of the Indian courts and police to totally seal the border between Nepal and India on a few days preceding the festival and see that not a single animal or a bird is exported or sent to Nepal.

This mass carnage or culling of healthy animals, should never happen again. I can understand killing of an animal or a bird in a slaughterhouse for meat or even mass culling them to prevent spread of some deadly disease. But this senseless Gadhimai carnage, that takes us back to medieval periods, can not be justified on any basis at all.