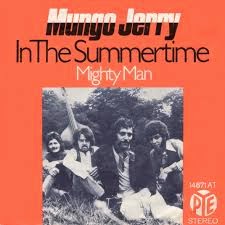 Mungo Jerry is a British rock group that was highly successful in the early 1970's. This week we feature a song that is considered as their most successful and most instantly recognisable song.
"In the Summertime" celebrates the carefree days of summer. In 1970 it reached number one in charts around the world, including seven weeks in the UK Singles Chart, two weeks in Canada, and number three on the Billboard Hot 100 singles chart in the US. It is considered one of the best-selling singles of all time with an estimated 6 million copies sold.

The song's lyric "have a drink, have a drive, go out and see what you can find" was even used in a UK campaign against drink driving.


If you can not see the embedded video on your android devices, here is the link. http://youtu.be/wvUQcnfwUUM You can also copy and paste the link in your You Tube App. If that also does not work, search You tube, In the summertime, Mungo Jerry,