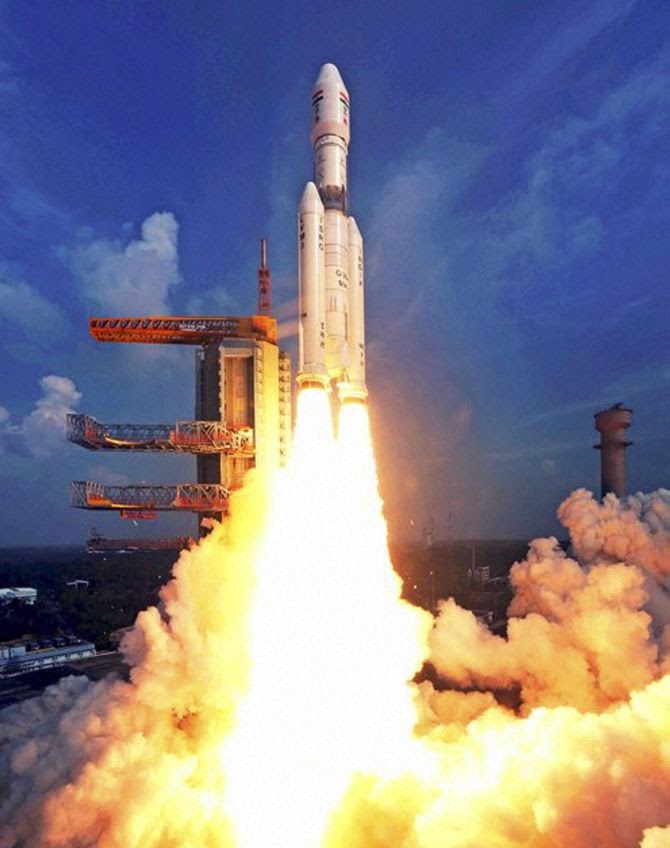 It was classified as an experimental flight, meaning thereby that the scientists expected to find variations, missed targets,under performance or even failures in it. Yet they had full confidence in themselves and in the gleaming rocket that stood tall at 43.43 meters and weighed 630580 Kg, because the launch came live on national TV.

ISRO or Indian Space Research Organization sent a tweet around 9.15 AM that the launch is being telecast live. After reading the tweet, I rushed to the TV room and switched on the national new channel to see a huge white rocket with two additional booster rockets attached to its sides. The boosters themselves could have been easily classified as full fledged rockets with their length of 25.35 meters and 4.0 meter diameter. These boosters would burn for 130 seconds and produce a peak thrust of about 5,150 KiloNewtons each. The central rocket being called as core stage, also with similar dimensions but two engines that would produce a thrust of 1400 KiloNewtons. This latest rocket, which can lift off payloads up to 4 tonnes, is being called by ISRO as GSLV Mk III.

When my TV came live, the count was going on at lift off minus 5 minutes. Next five minutes turned out to be very very long, as everyone in the launch center kept looking at the giant screens hung on the wall. The scientist in charge of the launch also kept looking at monitors in front of them as announcements kept coming on PA system about the flight status.

The long agonizing wait was finally over as count went on as 6-5-4-3-2 and at that instant orange flames shot out from both the boosters and the rocket started gliding straight up as if by magic. Soon after, the rocket, now emitting white smoke, climbed up so high that only a belt of smoke was all that could be seen. Now everyone was back to the huge telemetry screens, which showed the expected path and the velocity the rocket was supposed to take and the actual position and value that was conveyed by the rocket and various tracking stations.

I felt absolutely fascinated, as the expected path and actual path coincided accurately meaning thereby that the rocket just did what was expected of it. Announcements kept coming about core engine being ignited, booster engines being jettisoned and so on and then exactly 5.4 minutes after liftoff at 9.30 AM from the second launch pad of Satish Dhawan Space Centre in Sriharikota, the payload module, weighing over three tonnes, separated from the rocket at an altitude of 126 km and re-entered Earth’s atmosphere (about 80 km from sea level). As far as the giant GSLV Mk III rocket was concerned, the flight was 100 % successful as the main aim of this flight was to test the atmospheric flight stability of the rocket with around four tonnes of payload. 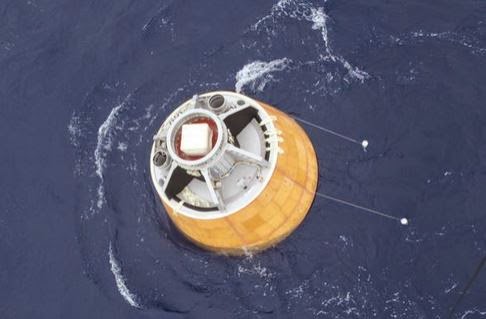 The actual payload for this experimental flight was a dummy cryogenic engine attached to a Crew Module Atmospheric Re-entry Experiment CARE. After its release by the rocket the CARE module descended in a ballistic mode and splashed down into the Bay of Bengal, some 180 km from Indira Point, the southern tip of the Andaman and Nicobar Islands. The CARE module shaped like a 2.7-meter tall cup cake and weighing over three tonnes, had a diameter of 3.1 meters. It featured aluminum alloy internal structure with composite panels and ablative thermal protection systems, It was to safely drop down into the sea by specially-made parachutes. The experiment also witnessed the largest parachute in action ever made in India. The main parachute, which helped the crew module touch the waters at around 7 meters/second speed, was 31 meters in diameter. During the flight downwards, attracted by gravity, it withstood a temperature of around 1,600°C because of the resistance produced by the atmosphere of the earth. Eventually, the module is going to carry up to two to three astronauts. The aim of this experimental module mission was to understand the re-entry characteristics and according to ISRO, even this experiment has concluded as per expectations. Because the launch was super smooth, the attention of everyone was now drawn to actual recovery of the crew module from sea. The crew module CARE is not only fitted with its beacon and GPS tracker but also with a system that eludes a chemical that turns the sea water at the point of impact a fluorescent green. This would enable the overflying Dornier aircraft to spot it even if its beacon and GPS tracker fail. However nothing of the sort happened and CARE gave loud and clear signals. The Indian coast guard vessel “Samudra Paheradar” waiting nearby spotted the crew module and immediately made a deft approach. A 17-member team from ISRO on board the vessel, recovered CARE at 4.30 PM. There was extremely satisfying news that the module looked intact, which meant that it had withstood the high friction and temperature during the re-entry into the atmosphere. 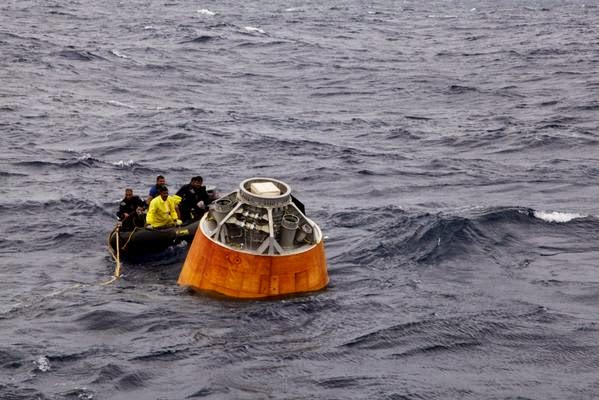 The module should reach the Chennai port by December 21st 2014, from where it would be shifted to Vikram Sarabhai Space Centre at Thiruvananthapuram in Kerala for further study.

The experimental flight of GSLV Mk III is a major step towards building a space delivery system that can deliver payloads up to 4 tonnes ( what most of India's communication satellites weigh today and have to be launched by using European space agency rockets.)