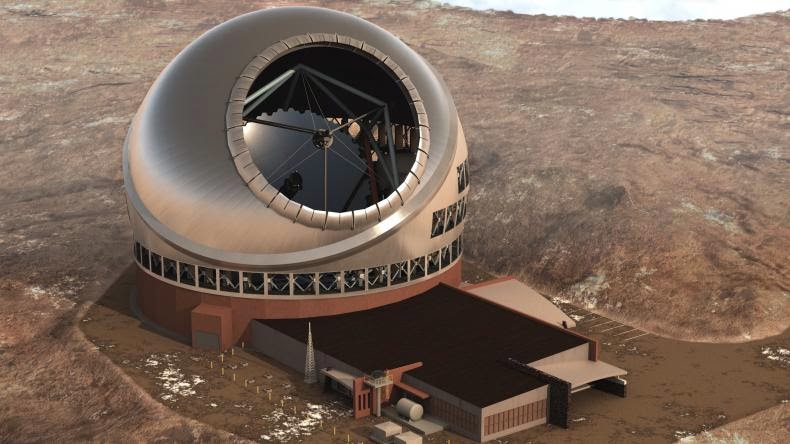 A couple of months ago, I had reported about a giant new astronomical telescope that is being set up at Mauna Kea, the highest point in the U.S. state of Hawaii, through international cooperation. This new telescope with a 30 meter diameter mirror is being called as Thirty Meter Telescope (TMT) It is expected that it would enable the user astronomers to gaze 13 billion light years into the universe.

Last week, India officially signed as a partner for the TMT project along with the U.S., Japan, Canada and China. India will contribute about Rs 1.3 Billion over the construction period 2014-23. with 30 percent of it in cash and balance in kind, to be spent on vital components of the telescope to be built in India in partnership with various industries.

A telescope's light gathering power and ability to resolve small detail is directly related to the diameter (or aperture) of its objective (the primary lens or mirror that collects and focuses the light). The larger the objective, the more light the telescope collects and the finer detail it resolves. The the largest telescope in India has only a 2-metre mirror ( on Mt. Saraswati, Digpa-ratsa Ri, Hanle in south-eastern Ladakh in the eastern Jammu and Kashmir state of India), though India is building one at Devasthal, Nainital, Uttrakhand state, that will have 3.6 meter diameter. Readers can imagine how much more powerful the TMT telescope is likely to be. 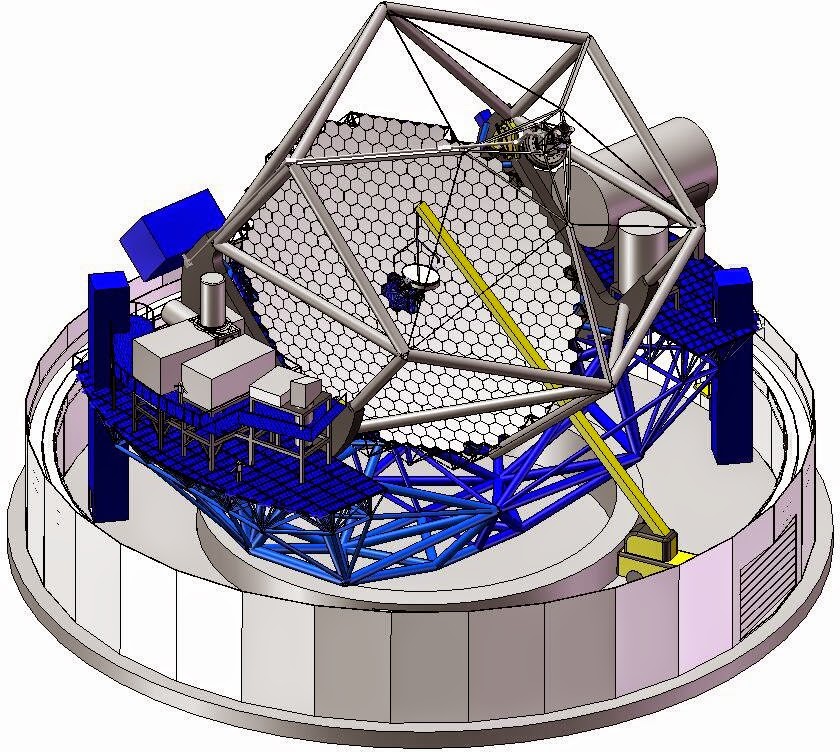 Genaral internal arrangement of the telescope

Telescopes can use either lenses or mirrors as objectives. The telescopes using lenses are known as refracting telescopes (dioptrics). The ones that use mirrors are called as reflecting telescopes (catoptrics) and those using a combination of lenses and mirrors are known as Catadioptric telescopes. Any large sized telescope has to be either of the latter two types because of practical difficulties in making optical glass flats of such large size, that would give distortion free images and grinding the same to required convex objective lens shapes. Comparatively, curved mirrors are easier to make and can be given even parabolic or hyperbolic shapes. 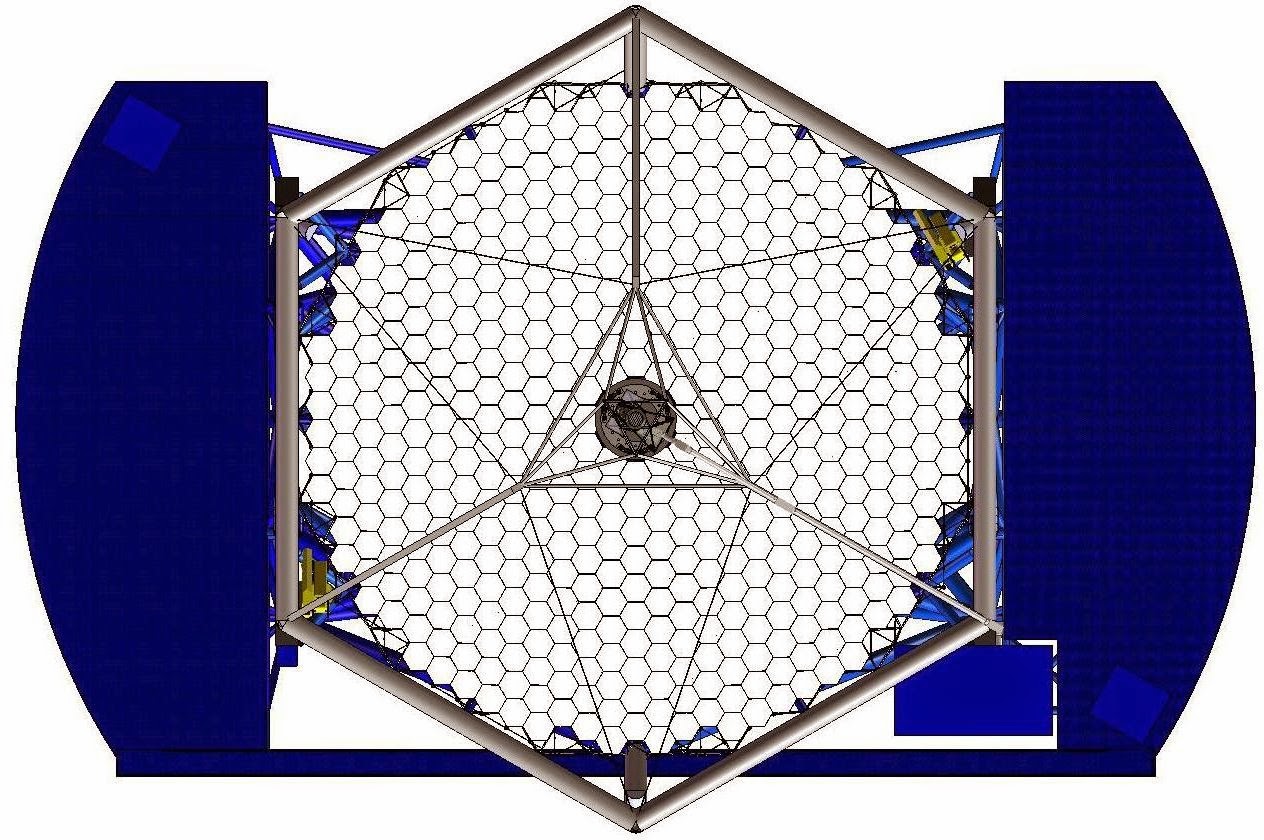 The mirror consists of 492 hexagonal segments

However, when we think of making a 30 meter diameter mirror objective, it is impossible to create a single, workable 30-meter diameter mirror. It is bound to be too heavy and will eventually sag from gravity distorting the curve profile. There are other problems in maintaining such a large mirror. At Mauna Kea, there is another large telescope built by Japan and known as Subaru telescope. A mishap happened at this telescope when there was a coolant leak onto the primary mirror in July, 2011. The mishap had a significant impact on functioning of Subaru Telescope and recovery work to put back telescope back in shape including meticulous inspection and cleaning of the affected areas took almost two years and was completed only in the summer of 2013.

To avoid such problems, TMT design has decided to substitute the single objective mirror with 492 mirror segments of hexagonal shape of 1.44 meters size, that will be assembled like a jig-saw puzzle to make on mirror. Position of each of these mirrors, will be precisely controlled along three axises using at least 3 precision actuators to sense and correct any segment displacement even to an extent of a micron ( one hundredth part of a millimeter), so that the entire assembly would behave like a single, gigantic 30 meter-wide surface. 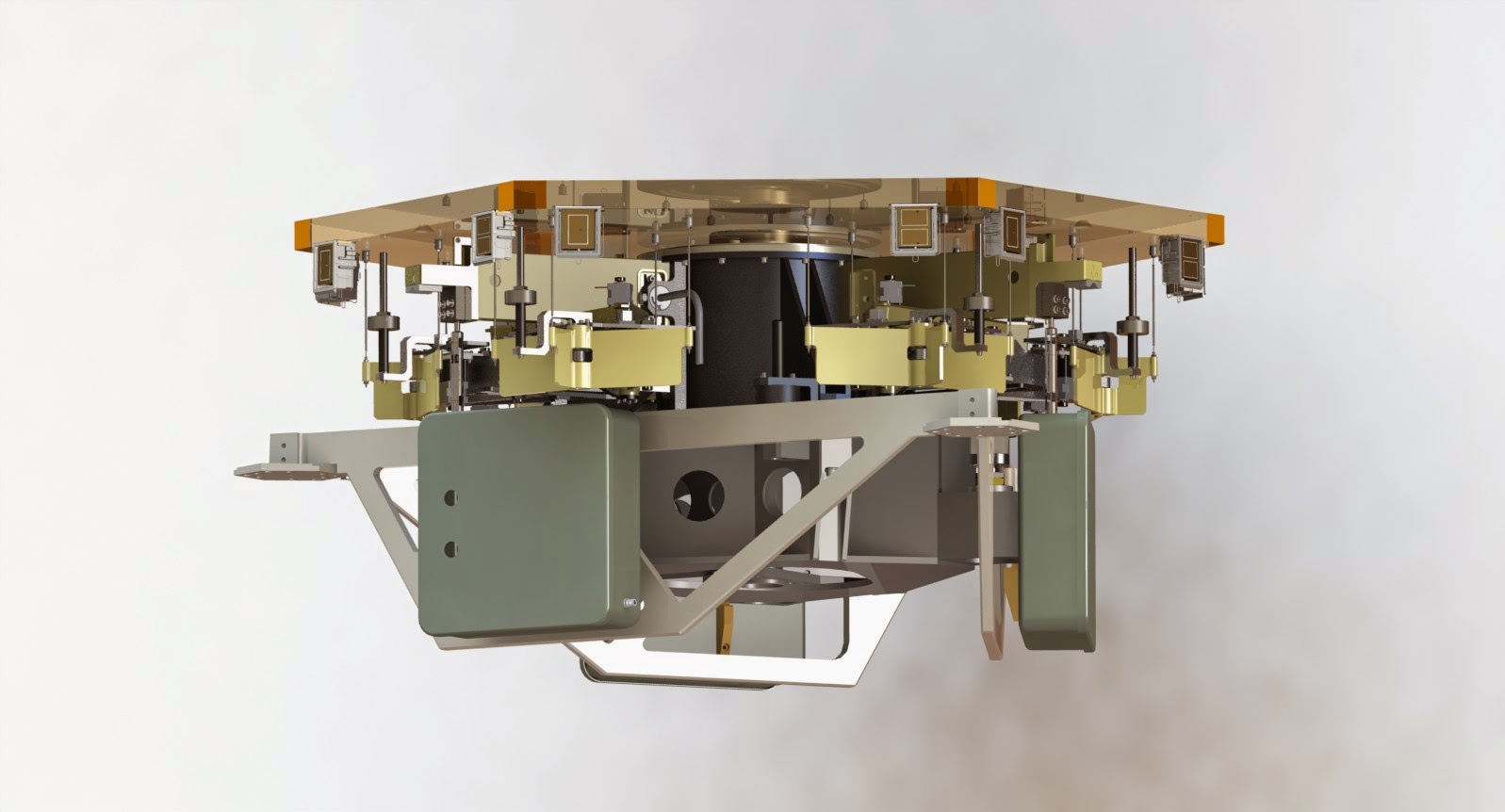 A Hexagonal segment with controllers

India has agreed to fabricate, test and supply these 492 mirrors along with 1500 actuators to control the hexagonal mirrors along with the segment support assembly to keep all the mirrors in position so they function as a single mirror of hyperboloid shape. Most of these parts would be fabricated in Bengaluru city in Karnataka state. Bengaluru’s expertise in astrophysics, electronics and software development will be put to test in this project.

Eswar Reddy, programme director of TMT-India and associate professor at the Indian Institue of Astrophysics feels that the “trickiest part” is to get hundreds of segments behave like a gigantic monolithic mirror and this involves developing several new technologies in mechanics, electronics, optics and control software.TMT-India has been formed by coming together of number of research institutions comprising of Indian Institue of Astrophysics, the IIA, Aryabhatta Research Institute for Observational Sciences (Nainital) and the Inter-University Centre for Astronomy and Astrophysics (Pune).

Prof. Eswar Reddy says that The TMT, which is expected to be completed in 2023, will be 150 times more powerful than the Hubble Space Telescope, allowing astronomers to look well beyond our solar system, to the near-beginning of time and will be able to observe the universe when it was very young, just half a million light years.

Henry Yang, Chair of the TMT International Observatory Board and Chancellor of the University of California Santa Barbara says; "The official signing today with India's investment reassures the success of TMT, India's contributions in the areas of software systems, segment production and the production of the very high precision sensors and actuators that make the primary mirror possible are key to the project."