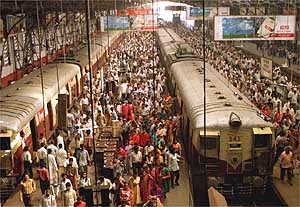 Government of India announced a policy document in the year 2000, called National Population Policy 2000, which hoped that by 2010 Total Fertility rate or TFR of the country (TFR measures average number of children born to a woman during her entire reproductive period) would be brought down to net replacement level or 2.1 children per woman.

The population data published in the year 2000 indeed looked very dismal. TFR for the country was still hopelessly high at 3.2. Every sixth person on the globe in that year was an Indian and by the turn of this century every fifth living person would be an Indian. India added about 1 Million persons to its population every fortnight and added one Australia every eight months. By 2045 or earlier, India would overtake China as the world’s most populous nation. Interestingly the data for the country showed great variations with just four states, Bihar, Madhya Pradesh, Rajsthan and Uttar Pradesh contributing as much as 49 percent of the increase in population

It turned out that that by 2010, though the replacement level had come down, it was not good enough. The TFR in 2010 was 2.6. In 2011 it further came down to 2.5. In next 2 years or by 2013 it has fallen to 2.3, though just 0.2 points away from reaching replacement levels, yet far from the 2010 target. The 2013 data for the Sample Registration Survey (SRS), conducted by the Registrar General of India, the country’s official source of birth and death data, was released this week.

Unfortunately, the great disparity between states continues. Though the SRS shows that the Total Fertility Rate – the average number of children that will be born to a woman during her lifetime – in eight States has fallen below two children per woman, Nine states, all of them in the north and east, with possible exception of Gujarat, which is in the west, are spoiling the overall picture as they are still much above the magic figure of 2.1, below which populations begin to decline. As anticipated, all BIMARU states, which are always on lower rungs of development, such as Bihar, Madhya Pradesh, Rajasthan, Asaam and Uttar Pradesh are in this negative list. 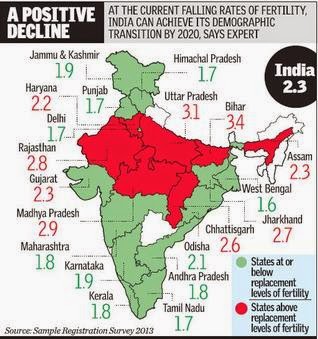 On the other hand in many states the replacement ratio has fallen to 1.8, which means that the populations have actually started decreasing, a sure symbol of literacy and development. West Bengal now has India’s lowest fertility, with the southern States, Jammu & Kashmir, Punjab and Himachal Pradesh. Among backward States, Odisha too has reduced its fertility to 2.1. Another worrisome or distressing fact emerges from this data. We are likely to see much higher level of migration from the northern states to the south, a fact which has proven to be a hot potato for the western states like Maharashtra.

If India wants to achieve more equitable basis pf population, it is obvious that much greater attention needs to be given to raising literacy levels and development of BIMARU states, otherwise they would continue to bomb the national objectives.