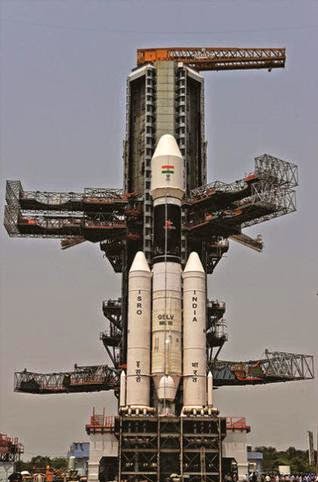 Come this December, if all goes well, India's giant 630-tonne GSLV-Mk III launch vehicle should blast off to the skies carrying on board a CARE (Crew Module Atmospheric Reentry Experiment) weighing about 3.65 tonnes. This flight of GSLV-Mk III rocket, designated as LVM3-X, is the maiden flight for this biggest and heaviest rocket, ever to be designed by Indian space scientists.

GSLV Mk III is designed to carry payloads in future of up to four tones such as heavy communication satellites that are likely to weigh that much. A new cryogenic engine is being indigenously developed at Isro's Mahendragiri facility in Tirunelveli district of TamulNadu for this purpose. This engine would be used later in the first developmental flight of the GSLV Mark-III, which may happen in next two years and will carry a communication satellite of four tonne nominal payload capability.

The GSLV Mk III rocket that is being launched this December will have only a dummy cryogenic engine that will match in weight to the real thing. Consequently, the rocket will not be able to put the payload it carries into orbit. The flight is essentially being carried out for flight validation of the complex atmospheric flight regime, validation of new design features and overall integrity of the mission design of this rocket. This experimental flight will provide all the inputs required for the first developmental flight of the GSLV Mark-III to come.

But, What is more interesting about this experimental flight, is the 3.65 tonne CARE payload, which essentially is an unmanned crew module and can be thought to be the first baby steps towards sending astronauts into space in this module. GSLV-Mk III rocket used for this mission will have two gigantic strap-on motors around the core stage and each of which will use 200 tonnes of solid propellants. The core stage will use 110 tonnes of liquid propellants. Above the core stage is the cryogenic stage. The CARE module will be “encapsulated” with the dummy cryogenic stage. This mission will not put any object in an orbit, but would simply release the payload at an altitude of 126 Km, imparting a velocity of 5.3. km/second to it so that it can return to earth. It will re-enter the atmosphere at about 80 km height. At an altitude of 15 km, there will be an “aerial ballet,” when three separate sets of parachutes to be deployed in pairs, including a 31-metre diameter parachute which will be the biggest made in the country, will open up one after the other to slow down the module’s descent. The module is expected to splash down in the sea near the Andaman archipelago, about 600km from Port Blair and will be recovered by the Indian Coast Guard and ISRO personnel. The entire flight from the lift-off to the splash-down will last about 20 minutes. 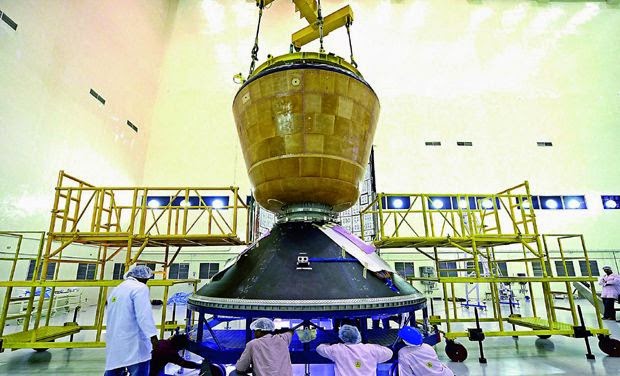 ISRO scientists call it as a passive, experimental and sub-orbital mission, yet its importance in no way can be denied. The purpose of this mission is to test the ability of the crew module to re-enter the Earth's atmosphere with thermal resistance, parachute deployment in cluster formation, aero braking system and apex cover separation procedures. Scientists hope that an improved version of this crew module, a brown bucket-like structure with a black lid mounted on a pedestal will carry an Indian crew in space, may be 10 years from now. This mission is no doubt are the first baby step towards manned space flights by India.