Riding piggyback on a comet- Day 1 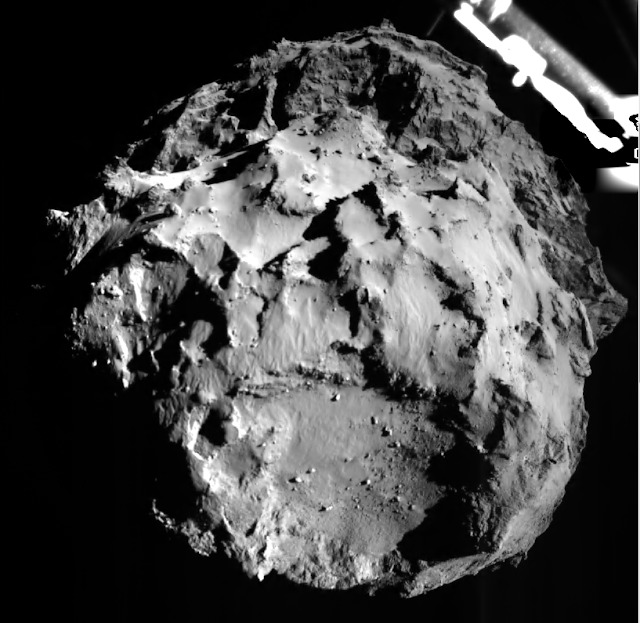 The tweet came exactly at 9.30 PM (Indian standard time) from an unknown twitter handle and said Philae Lander @Philae2014 Touchdown! My new address: 67P! #CometLanding. With this, began a new experience and a relationship for the entire mankind, never before attempted in history.


Philae is the name of a robotic probe lunnched by European Space Agency aboard its mother space- craft Rosetta. The pair blasted off into space in 2004, and took more than a decade to reach its target; 67P/Churyumov-Gerasimenko Comet in August 2014. Similar to India's Mars orbiter, Rosetta too used the gravitational pull of Earth and Mars as slingshots to build up the speed.

Rosetta-Philae pair had to travel more than 510 million kilometres (320 million miles) from Earth to reach the comet. The mission was approved in 1993 and has costed about 1.3 Billion Euro to ESA. The first major obstacle faced by Rosetta was its passage very close to an asteroid 250 million miles from Earth. The spacecraft was made to loose its radio signal for 90 minutes during this flyby of the Steins asteroid, also known as Asteroid 2867. Waking up after almost three years of hibernation, Rosetta sent its first signal back to Earth on January 20th, 2014. Systems had been powered down in 2011 to conserve energy, leaving the scientists in the dark for 31 months. The pair finally separated from each other, some 9 hours earlier to touchdown (approximately around noon IST) on Wedensday, 12th November 2014. This was confirmed by the ESA Rosetta Mission @ESA_Rosetta, in a tweet at about 3 PM (IST) on Wednesday November 12th, 2014 as “ SEPARATION CONFIRMED! Safe journey @Philae2014!” 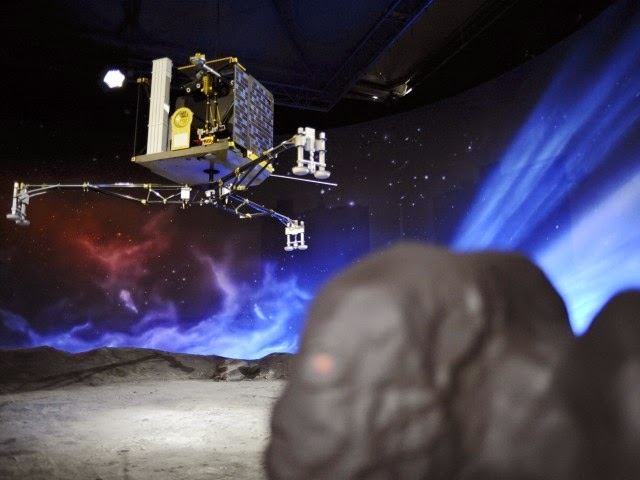 The European Space Agency correctly considers this first-ever landing on a comet, a crowning phase in the quest to explore the origins of the Solar System, but many of the readers must have felt puzzled as to why landing a probe on a comet like 67P, that is travelling towards the Sun at 18 kilometers per second (11 miles per second), when there are planets like Mars that are yet to be investigated fully.


The Comet known to astronomists as 67P, is officially designated 67P/Churyumov–Gerasimenko. It was discovered in 1969 by Klim Ivanovych Churyumov of the Kiev National University's Astronomical Observatory. It is a comet with a current orbital period of 6.45 years around the sun and a rotation period of approximately 12.4 hours and travels at a break-necking speed of 135,000 km (84,000 mi) per hour. It is expected to come to its perihelion (closest approach to the Sun) on 13 August 2015. Readers would be able to realise that with such a short orbital period, Philae lander, riding piggy back on 67P, (if it can be made to stay there safe and sound) is going to have a tour of the entire solar system in just 6 years.


A comet is an icy small Solar System body that, when passing close to the Sun, heats up and begins to outgas, displaying a visible atmosphere or coma, and sometimes also a tail. With 67P approaching the sun next year in Agust 2015, Philae would have a great opportunity to examine the coma and the tail. Many comets have collided into Earth in its early stages. Many scientists believe that comets bombarding the young Earth about 4 billion years ago brought the vast quantities of water that now fill the Earth's oceans, or at least a significant portion of it. The detection of organic molecules in significant quantities in comets has led some to speculate that comets or meteorites may have brought the precursors of life—or even life itself—to Earth.


However, we humans have always regarded Comet sightings as bad omens that would bring major disasters such as wars, floods or even black plagues. The best-known example is probably Halley's Comet of 1066, which was considered as a "bad omen" for King Harold II of England but a "good omen" for William the Conqueror. However these beliefs are now all gone and people look at comets for finding solutions to unsolved questions like origin of life. 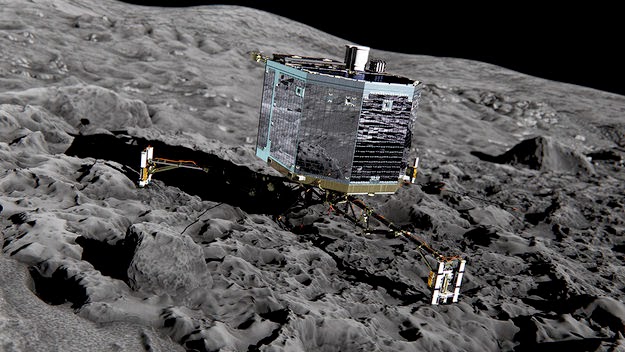 The landing of Philae on comet 67P could have been considered as a great unqualified success, but unfortunately not everything seems to have gone correct. Because 67P is a small mass moving in space, ESA scientists had planned to fire immediately after touchdown, 4 harpoons to anchor the lander to the ground and prevent it escaping from the comet’s extremely weak gravity. The harpoons were expected to support Philae during extreme turbulence conditions. Initially, mission control had confirmed that Harpoons were confirmed as fired & reeled in. However mission control confirmed later that something has gone wrong when they tweeted: Hang on in there Philae! MT @Philae2014: I’m on the surface but my harpoons did not fire. My team now trying to determine why. The surface of the comet also appears to be soft, which is possibly why Philae has not been able to secure itself.


Whatever is the final outcome, we shall know in a few days. Meanwhile Philae has started taking photographs, which would certainly show the environment on the comet itself. This space mission is an incredible achievement and requires to be seen in that light. We all should congratulate ESA scientists for this great feat.

( Continue to read report for Day 2)