Riding piggyback on a comet – Day 2 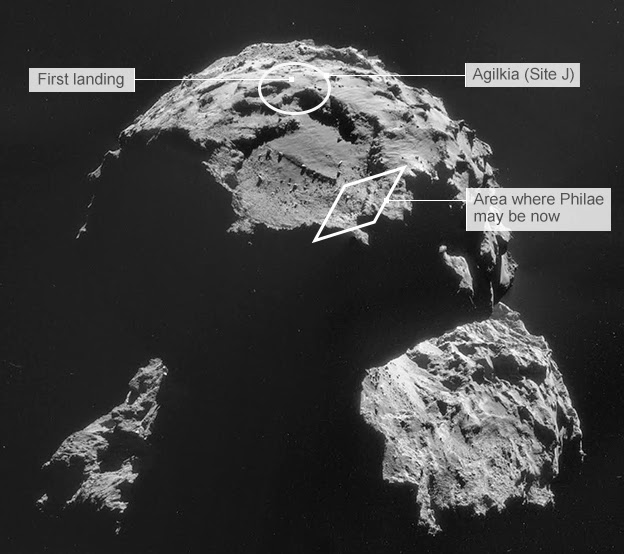 As the day progressed, the euphoria caused by this fantastic achievement started to wane bit by bit, as bad news kept trickling. I had mentioned in the previous article, that two harpoons, that were supposed to be fired to anchor Philae on ground because 67P comet is a small mass moving in space with extremely low gravity ( 1/100,000th that of Earth), did not get fired at all. In fact this washing machine sized probe weighs just unbelievable 1 gram on comet because of its low gravity. The harpoons were supposed to hold the probe against the surface of the comet and since they did not fire, Philae is sitting their just because of the gravitational force of its weight of 1 gram. Scientists recognize this as highly unstable and dangerous situation.

News for more trouble started coming in. Because the two harpoons failed to get fired, Philae just could not be anchored to the surface of comet at first touch down at 15.33 Hrs and bounced off the surface of the comet like a tennis ball and drifted through the void for almost two hours before touching down again at 17:33 Hrs. According to some reports, this bounce could have been as high as a mile or 1,6 Km. Even at this time it did not settle down on surface and bounced off again, though with a smaller bounce. After another 7 minutes it finally settled on the surface at 17:41 Hrs. in a shallow crater on the comet's 2 mile wide body. 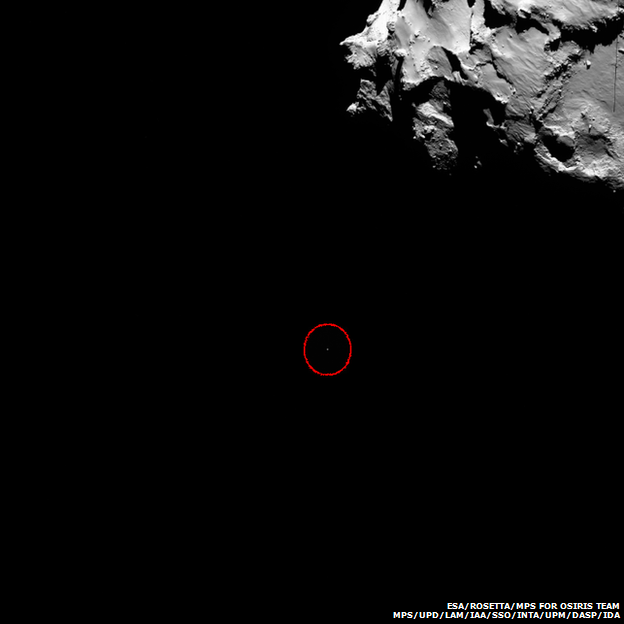 With the stability problem being solved temporarily, a new problem cropped up. Philae has a primary battery and secondary solar powered batteries. Scientists detected that they were hardly getting any solar power at all as during the 12 hour day, the comet received illumination for just 1.5 hours. The reason for this problem was found out to be the place where Philae was resting after the second bounce. It was sitting next to a cliff that was about few meters away and it was in the shadow of the cliff permanently. This meant that the shadow was blocking the sunlight from reaching to solar points.

This has brought about a new dilemma for the mission control scientists. With the primary battery slowly running out, they need to decide the use for which this power is to be used. There are 4 scientific instruments that can reveal tomography of the comet and data showing whether the matter it is made of is magnetized? The primary battery can run these experiments for a few days without the help of solar batteries. On the other hand, some acrobatic maneuvers can be tried to get the solar panels out of the shadows so they can keep Philae going for a few more months. However if this fails, the mission control will neither receive any data from the experiment nor would be able to move the craft out of shadow. This would mean that Philae's useful lifetime may now be much shorter and it would just keep sitting on surfaced of the planet in a mode of hibernation for the coming months. The comet is on a 6 ¼ year elliptical orbit around the sun, and at the moment it is getting closer to the sun. There is a chance that Philae might wake up again if its solar panels catch more light. But that is just a chance.

It appears that mision control scientists have decided to collect as much data as possible while its primary battery still has energy before trying any risky maneuvers. Philae's scientific instruments have already begun gathering reams of data to send back to Earth, including the first pictures taken from the surface of a comet. The first photos reveal the comet's rocky terrain, include one that showed one of the lander's three feet in the corner of the frame.

Another experiment was carried out in which a penetrator was hammered in comet's surface and related temperature rise was measured with sensors. This could give important clues regarding composition of the ground. 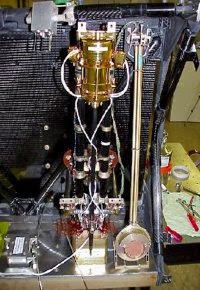 Because Philae is sitting their just with its own weight of 1 gram, scientists are figuring out whether an important planned experiment can be tried out This experiment involves drilling into the comet to extract some of the material buried beneath the surface. But drilling without the craft not being properly anchored can be dangerous as it can tilt or even lift off the lander. This experiment is important because scientists want to analyze the material of the comet as it has remained almost unchanged for 4.5 billion years, making it something of a cosmic time capsule. However as per latest news, mission control has decided to go ahead with drilling as the batteries may not last beyond Friday ( 14-November 2014).

Around 7PM (IST) on 14th November 2014, Philae started drilling on the surface of the comet. Around midnight, another attempt was made to rotate Philae to see whether it could get more sunlight to charge its batteries. Finally around 7 AM (IST) on 15th November, Philae sent the last round of data including analysis of the drilling samples, before its batteries went dead and it went into hibernation. It would revive only when sunlight falls on the solar chargers. Whether the data sent by Philae reveals at least some new information about the materials, the comet is composd off, we should know in a day or 2.

After Philae has gone dead, scientists can still receive data from the mother ship Rosetta, which carries on board 11 instruments to analyze the comet, over the coming months. Let us wait and watch.