Riding piggyback on a comet – the aftermath 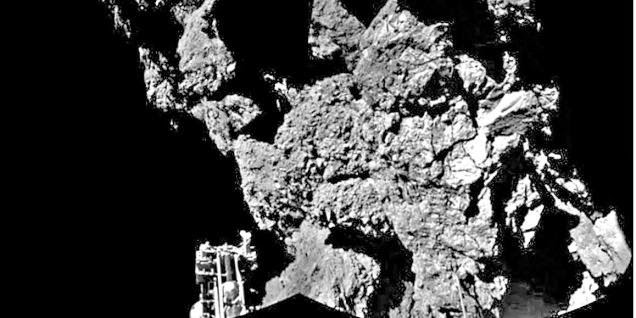 At about 7 AM (IST) on 15th November 2014, European Space Agency's comet lander Philae, sent the last round of data to earth and went into hibernation, because of low batteries. Ever since then, people around the world have been curious to know, whether Philae did succeed in sending some new information about the materials- the comet is composed off?

Well! Luck seems to be on our side, though partially! In spite of it's very short active life of only 57 hours on 67P comet, it seems that Philae has managed to spend some crucial information back to earth that should add to our knowledge of comets.

The most important observation made so far relates to what Philae has found out about the atmosphere over the comet. According to the DLR German Aerospace Center, the Cometary Sampling and Composition (COSAC) gas analysing instrument on Philae was able to 'sniff' the atmosphere above the comet and has detected after landing, organic molecules containing carbon elements. Organic molecules form the basis of life on Earth. This observation by Philae is important from point of view of many scientists, who believe that life evolved on our planet only after organic molecules were passed on to earth by comets that impacted with earth.

Philae has also successfully carried out another experiment before it's hibernation, in which a penetrator was hammered in comet's surface and related temperature rise in the penetrator was measured with sensors. This penetrator was equipped with multi purpose Sensors for Surface and Subsurface Science (MUPUS) tool to measure the density and thermal and mechanical properties of the comet's surface.

The penetrator was expected to go to depth of 40 Cm after hammering. However, it did not go that far deep in spite of the hammer setting being cranked up to its highest level. According to DLR, after passing through a 10-20 cm thick layer of dust, the sensor hit a layer of material estimated to be as hard as ice. Scientists were expecting the comet's surface to be much softer. Tilman Spohn, who leads the MUPUS team at the DLR, says in a statement issued on 18th November 2014; "It's a surprise. We didn't expect such hard ice on the ground.”

It was also reported that during dying hours of the battery, Philae had drilled into the comet's surface in its hunt for organic molecules. However so far no word has come, whether any sample of drilled materials was submitted to COSAC for analysis.

The two observations made by Philae; finding of hard ice on the surface and presence of organic molecules in the atmosphere; appear to be of great significance to us and could lead to better understanding of comets in future.

Comet 67P would be going nearer and nearer to the sun for next 6 months. There is a possibility that Philae's solar batteries might get charged again if sunlight falls on the solar panels. In that case Philae can come back to life and could complete the tasks left unfinished.