A helicopter as a gift 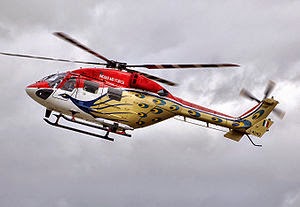 We all follow a custom that if anyone invites us to their homes for a function or even for lunch or dinner, we take with us some gift as a token of our appreciation for the invitation. If the invitation is just for a meal, usually a side dish or a sweet is presented to the host.

At the recently concluded meeting of SAARC or South Asia Association for regional cooperation held in Nepal, India's prime minister took along a novel gift that would be much appreciated by the host country. The country was presented an helicopter by India as a token of good will. The helicopter that was presented was the indegeneously made- Advanced Light Helicopter Dhruv.

Dhruv is an utility helicopter developed and manufactured by India's Hindustan Aeronautics Limited in Bengaluru. The helicopter first flew in 1992; however, its further development was prolonged and slow due to several factors such as design changes, budget restrictions, and sanctions placed on India following the 1998 nuclear tests. It entered into service in 2002 and caters for both civil and military customers.

Besides military service, it is being used by number of civil operators like Ministry of Home Affairs,Oil and Natural Gas Corporation, Chhattisgarh State Government, Jharkhand State Government and Geological Survey of India. It is also being used by a few other countries like Equador, Turkey and Surinam. For Nepal, Dhruv is no stranger because it had purchased two Dhruv helicopters in 2004 itself. Till 2014, about 200 Dhruv helicopters have been manufactured.

In 2013, Dhruv became the hero of the large-scale rescue operations led by the Armed Forces during the Uttarakhand floods. Its compact size, agility, ability to carry up to 16 people to heights of 10,000 feet, and to evacuate stranded people from inaccessible regions was much praised. It could carry more people from high-altitude helipads than the heavier Mi-17, and land where the lighter Bell 407 could not. During these operations, the total flight time put in by these helicopters was 630 hours, out of which 550 hours were dedicated to search and rescue missions. Prime minister of India took the decision to present this helicopter earlier this month. It is creditable that Hindustan Aeronautics helicopter unit readied the copter at its Bengaluru unit in 14 days. The copter reached Kathmandu on November 22. The helicopter supplied is of the latest Mark III version with Fitted with Shakti engines, a modern glass cockpit and avionics. This Mk-III version with Shakti engines has very good high altitude performance operating at altitudes over 6 km. It comes with seating for 14 fully equipped troops.

The first versions of the helicopter; Mark I and Mark II were equipped with Turbomeca TM 333-2B2 turboshaft engines and were not able to fly above 5000 ft. height. The new version is capable of flying up to 8000 ft.

The 5.5-tonne helicopter will benefit Nepal with its mountainous terrain and harsh environmental conditions. A technical team is positioned in Kathmandu to help with maintenance and logistics support.

One country that must be most interested in this gift would be another SAARC member country Afghanistan. It was reported in 2013 that it was getting 3 helicopters for its army sometime in 2014, though it is not known whether it actually received them.