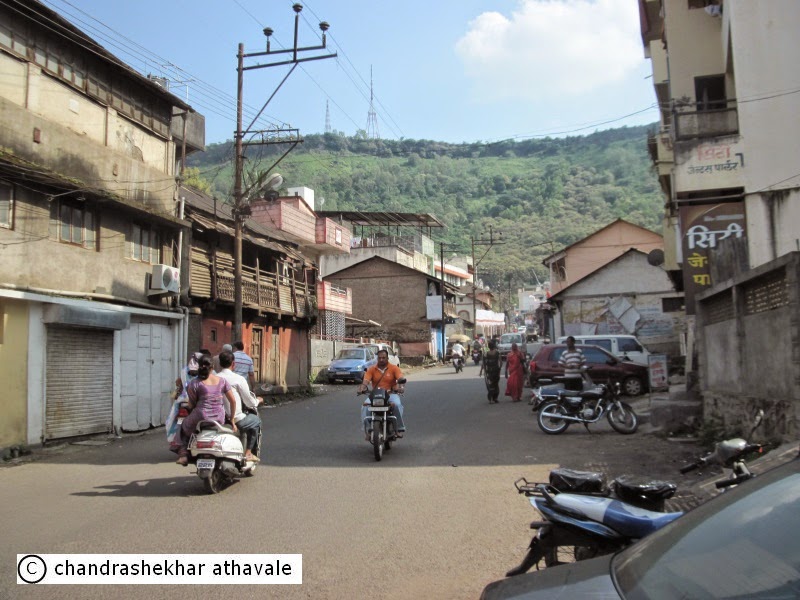 After lunch, we are on our way to hills of Western Ghat mountains once again. This time we take a new route, which is still westwards but slightly to the south. This road actually leads to one of the famous forts from Maratha history “SajjanGadh,” called great not because of any epic battles fought here, but because it was the place of residence of one of the most revered saints of the seventeen century Maharashtra, “ Swami Ramdas.” This fort still is an important religious place and on two particular days of the Hindu calender, devotees throng here even today, to worship Lord Rama.

However, we have no plans to visit the fort. A after travelling a distance of about 10 or 12 Km, we leave the winding road, that would climb up to the “Sajjan Gadh” and push forward on a narrow mountain road, along the hills. 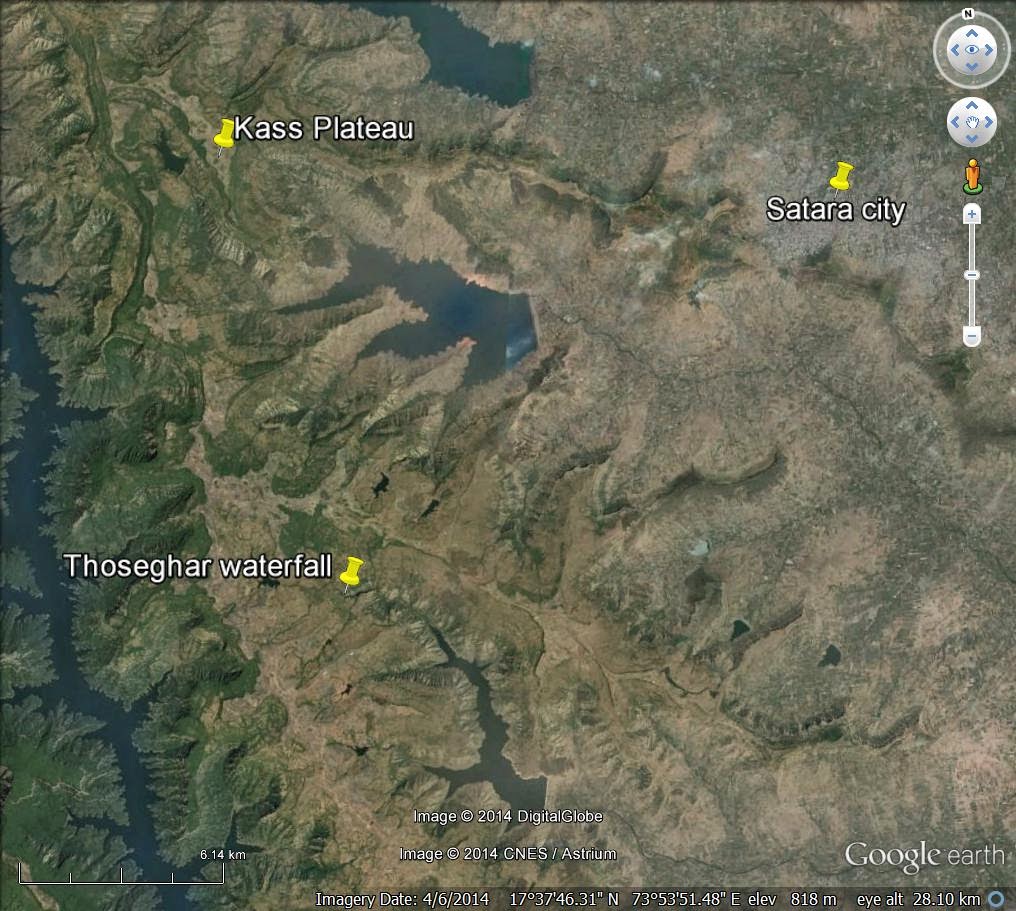 Geologists say that western ghat mountains are not mountains in their true sense. They are actually the faulted edge of the Deccan plateau formed during the break up of super continent of “Gondawana,” some hundred and fifty million years ago. After this break up, as Indian mainland kept drifting towards Asia, a huge volcanic explosion took place around 65 million years ago depositing huge amounts of lava that resulted into formation of the basalt rock here. All this upheaval, created vertical cliffs and deep valleys along the western edge of the mountains, creating a scary landscape of valleys as deep as 3000 feet and mountain tops carved out of black basalt rocks.

During the monsoon months (June to September), south-west monsoon winds bring moisture laden heavy clouds to India's west coast. They meet their first barrier, when mountain cliffs of western ghats present a formidable obstacle to them. This makes the clouds rise higher and while doing so, they let huge amount of moisture go off on the eastern edge of the mountains. At these places, the rain fall is extremely heavy, touching figures of 3000 to 4000 mm annually. Most of the rain water just flows away, forming hundreds of rivers and rivulets of various sizes. Because of the huge water flows in this terrain, consisting of deep valleys, it is possible to see many spectacular water falls along the entire ridge of Western Ghat mountains. The list of waterfalls here is very long, however some of the more famous falls can be listed as Palaruvi, Kedumari, Koosali, Jog, Magod, etc. One of these big waterfalls is nearby and we are on our way to visit it.

One of the largest reservoir of water in the western ghat mountains, has been formed at Koyananagar by damming the river Koyana. On the eastern side of the reservoir, rises another mountain ridge of about 3000 feet height. Because of the extremely heavy monsoon rainfall, hundreds or rivers and rivulets originate on this ridge and flow either westwards into Koyananagar reservoir or eastwards. “Tarlee” river is one such eastwards flowing river that originates on this ridge. This river has been dammed on the ridge itself and forms a small reservoir known as “Thoseghar Lake.” The river, further flowing east-southeast, encounters a deep gorge at a place that is roughly midway between two villages of “Chalkewadi” and “Thoseghar.” The river jumps down in this gorge of at least 500 meter depth in a spectacular fall, breaking down in several streams; out of these the two most prominent once have been named after “ Rama” and his brother “Laxmana.” The waterfalls are known by a general name as “Thoseghar Waterfalls.” 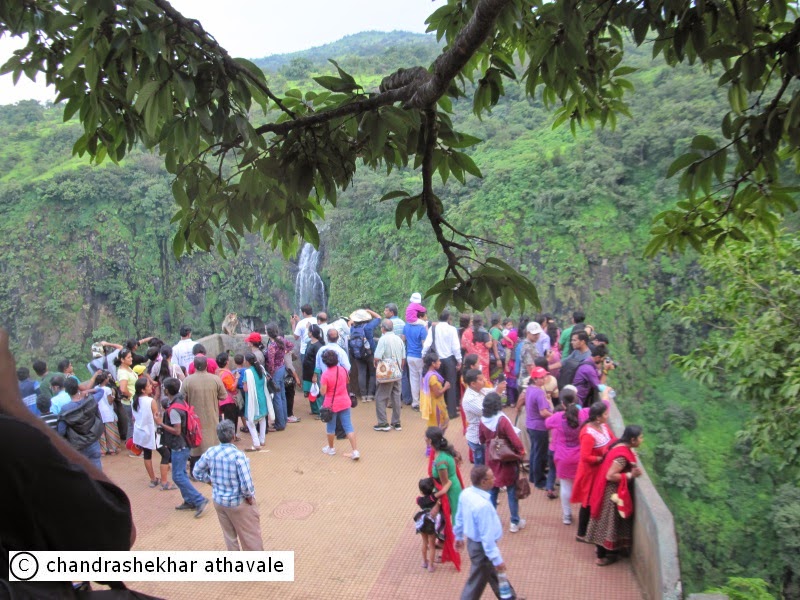 The bus stops and we all get down. There is a makeshift ticket booth, where visitors need to pay a nominal entry fee. As usual, few shops can be seen around selling cool drinks, tea and snacks. The tourism department has built us a nice paved path for the visitors to go deeper in the gorge so that they can view the falls in real glory. To start with the steps are small and distanced apart. Soon the path becomes narrow and steps become taller. The whole area is deeply wooded and is a regular forest. After climbing down around 100 to 150 feet, I can see a crowded platform full of visitors, with everyone making full use of the photo op. I reach the specially built observation platformr. Ahead of me is a deep gorge around 500 meter deep and the water oozing out from several streams on ridge top appears to be jumping down with a careless kind of attitude. Some of the falls are quite small; around 15 to 20 meters. The two big once however, appear to be jumping straight down. 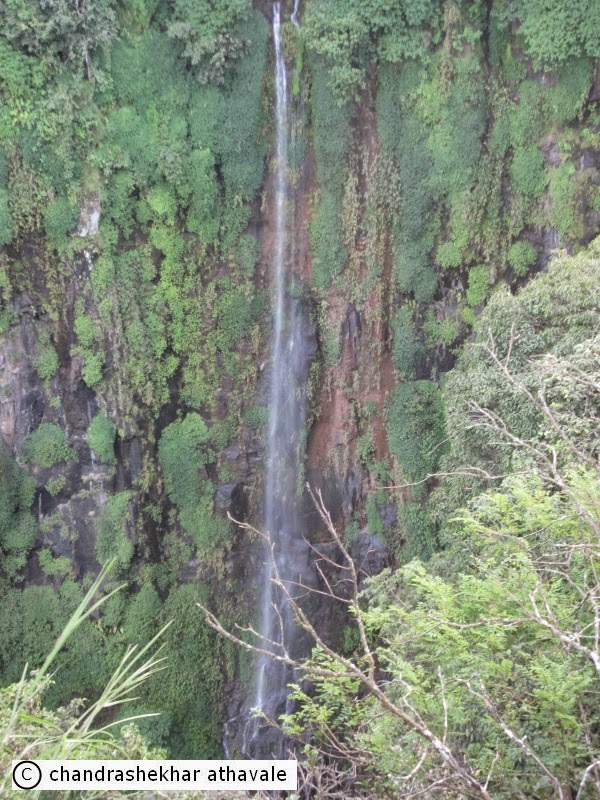 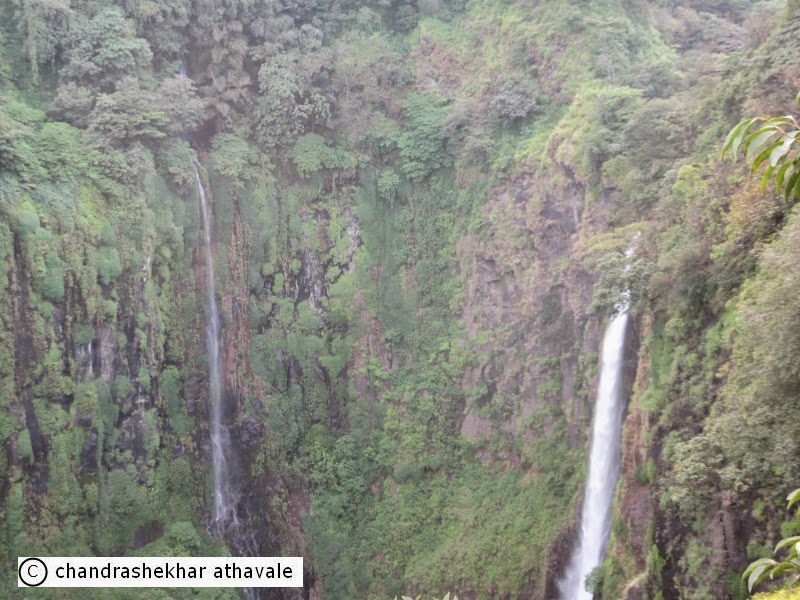 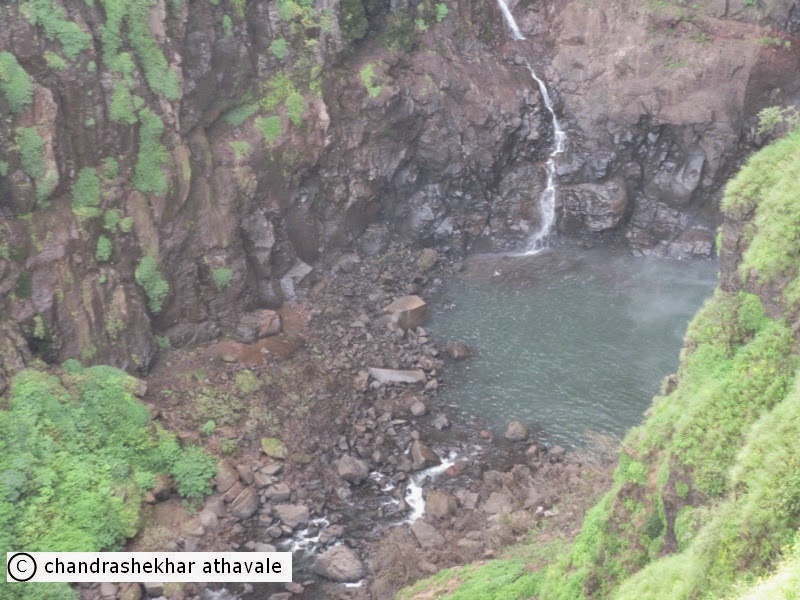 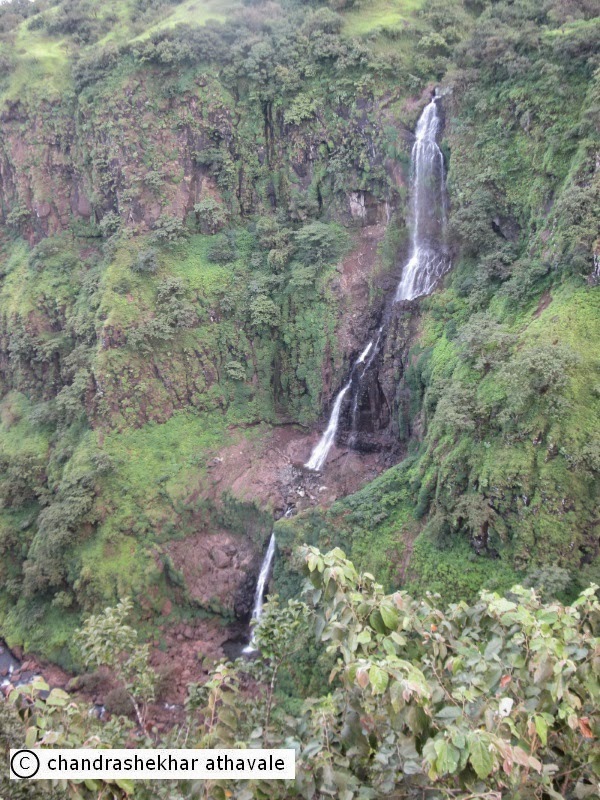 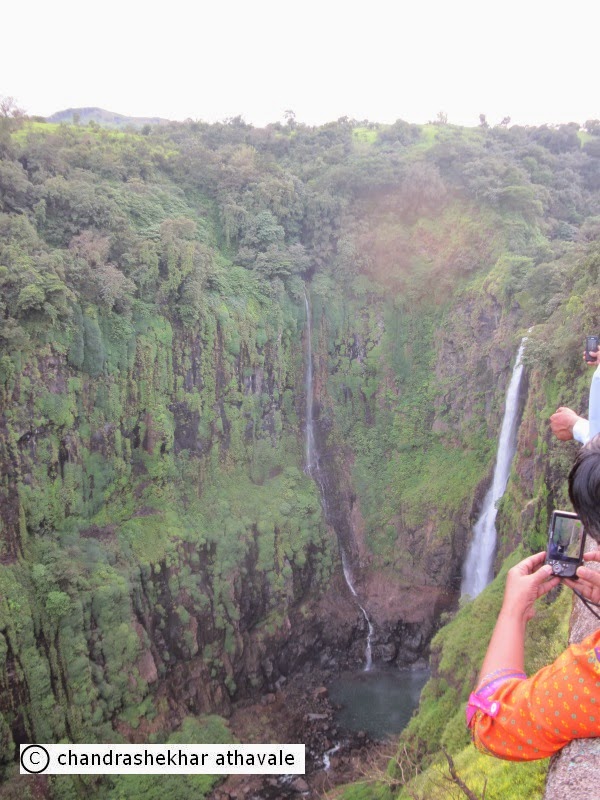 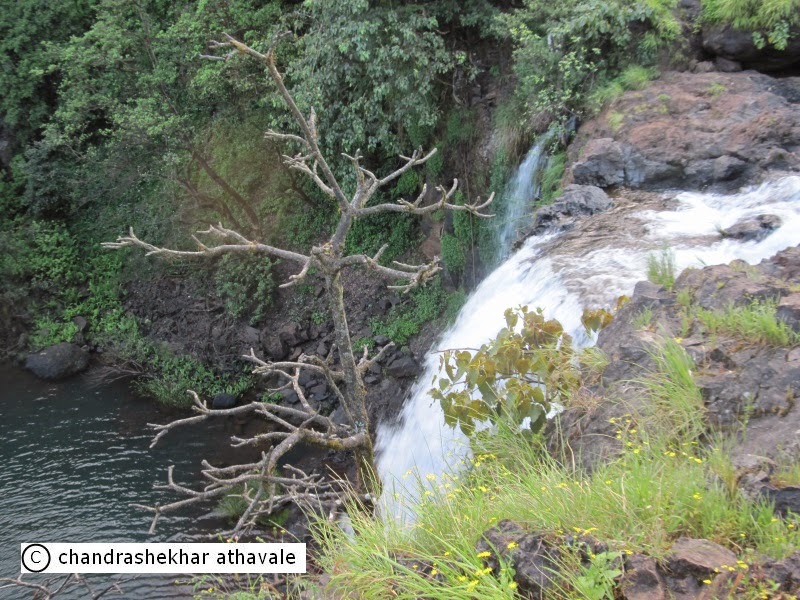 The whole setting here is quite spectacular. The weather beaten, vertically cut, cliff faces in basalt, look super imposing and the deep gorge has some kind of eerie feel about it. The water releasing itself into the gorge has a non benevolent, “I don't care” attitude as it carelessly jumps down with a roar. After watching the falls for few minutes, it is time to return. On way back we visit another vista point, from where a better view of water just about to jump down can be had. I take photographs and relax a bit before the final climb up begins.
Soon I am back to the spot, where our bus has been parked and after a refreshing cup of tea, we start on our return journey. In just one day, I have managed to see two of nature's great wonders. My mind is filled with amazement and as I keep thinking about these two places, I doze off.