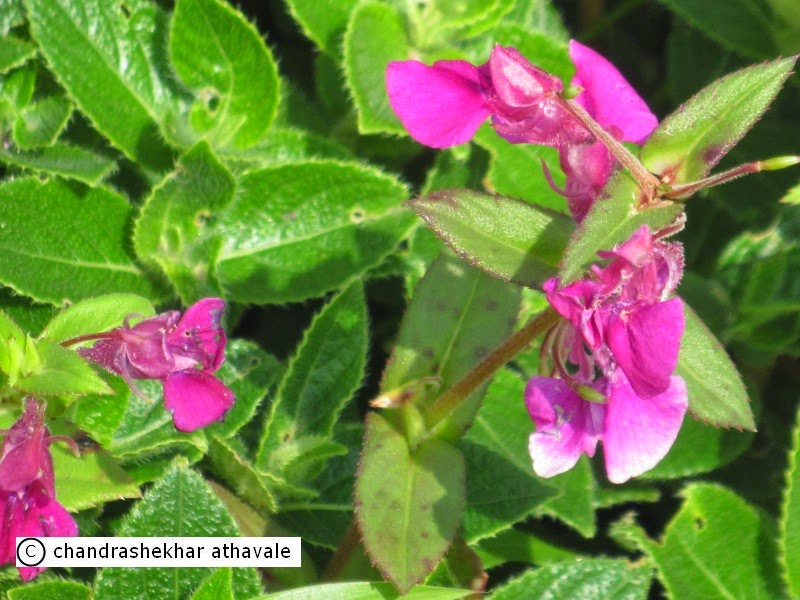 I have in front of me, a fairly large sized field, full of small herbs with most of them having a purple pink flower at the top. On careful observation, they turn out to be Impatiens or “Terda” flowers ( Impatiens laweii) with leaves directly growing from the herb stalk itself. 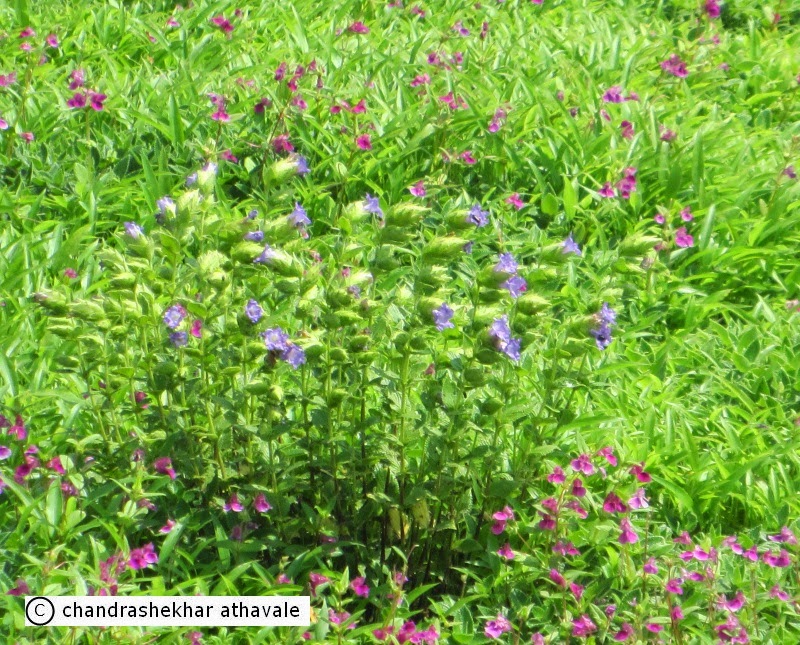 In the middle of this sea of purple pink flowers, an island cluster of erect shrubs catches my attention. This bunch is slightly taller than the Impatiens and also has a flower of dark blue colour. These are probably “Karvi” ( Strobilanthes callosus) flowers. I look around; I can only see Impatiens flowers around. Surprisingly, this perhaps is the only small cluster of these blue flowers that has bloomed. 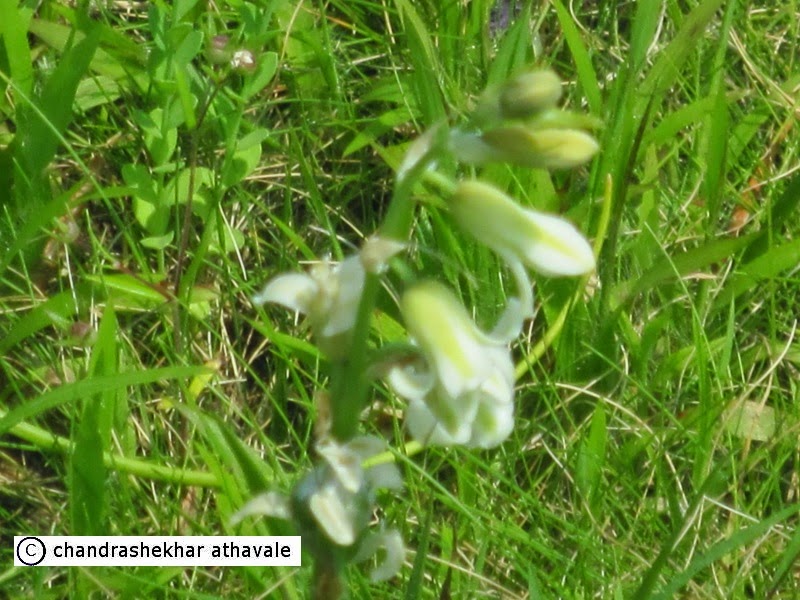 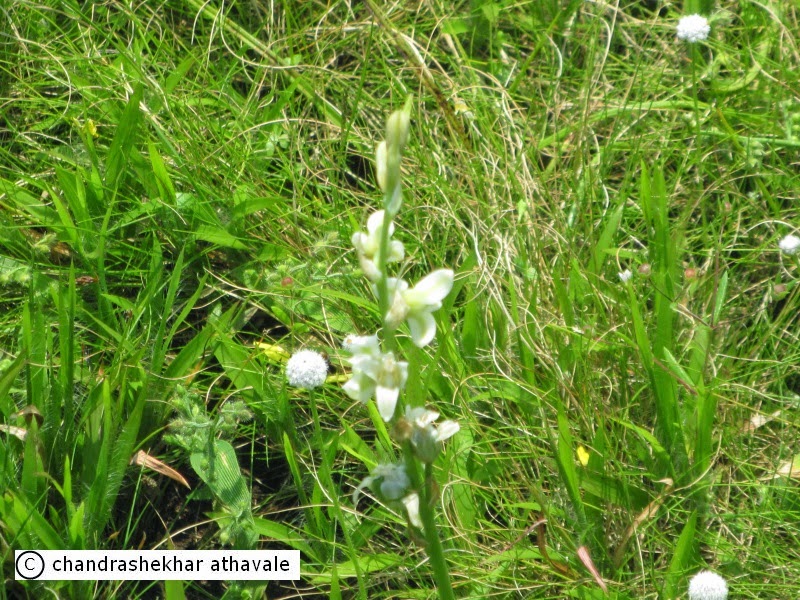 I walk further ahead. In the sea of Impatiens around me, I can see two, similar looking erect plants; both very similar to “Nishigandha” or Tuberose with their white flowers. Yet, closer examination reveals that they are quite different. The first one has all the flowers grown out only in one direction at right angles to the stalk, like bristles on a tooth brush. This one is actually an orchid or a plant that survives on air and is called as “Toothbrush Orchid” (Habenaria heyneana). The other one is known locally as “Suichi Bhaji” or Dipcadi (Dipcadi montanum) and is actually from “Lily” family. Toothbrush Orchid flowers are plain white whereas Dipcadi flowers are greenish white. 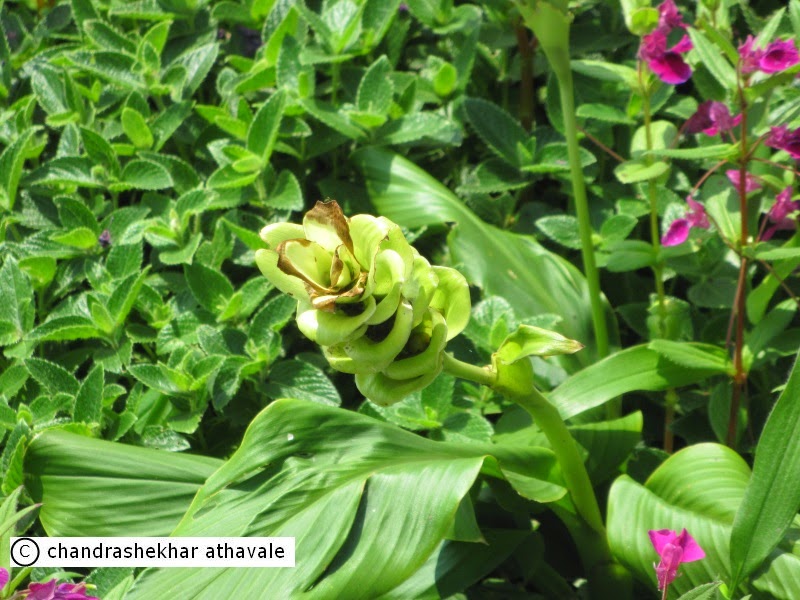 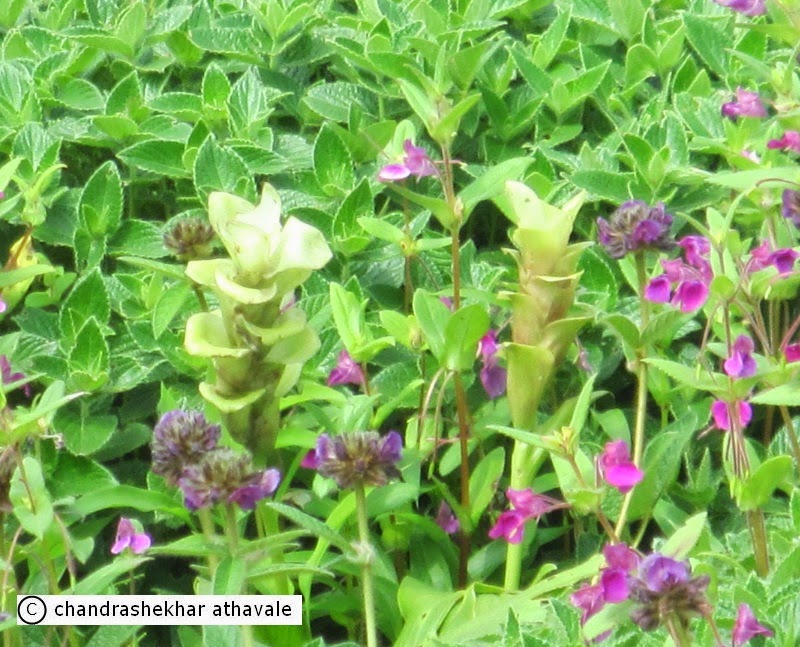 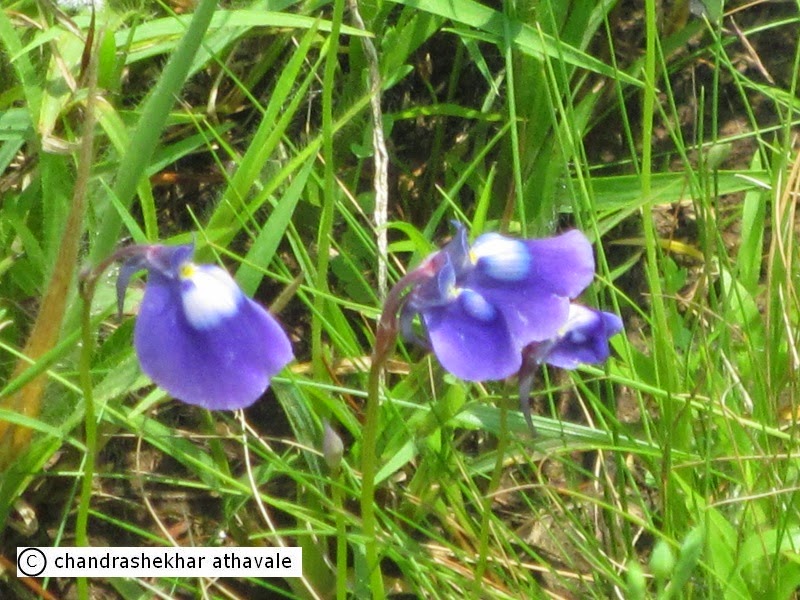 On my left, I can see two more erect herbs that very much look like buds with a multipetal structure. Actually, these are supposed to be Rhizome ( plants with subterranean stem that is usually found underground; like ginger for example) herbs and called as “Chavar” (Hitchenia caulina). Ahead of them, I can see some blue flowers, with a single bluish purple petal. This lovely little herb is actually an insectivorous and survives on tiny insects. The blue petal has a white spot in the middle, which in reality is a trap door. Whenever any insect sits on this, the trap door folds inwards with the insect falling inside the stem, where it is consumed. The plant is known as “Sitechi Asave” or Utricularia (Utricularia purpurascens). 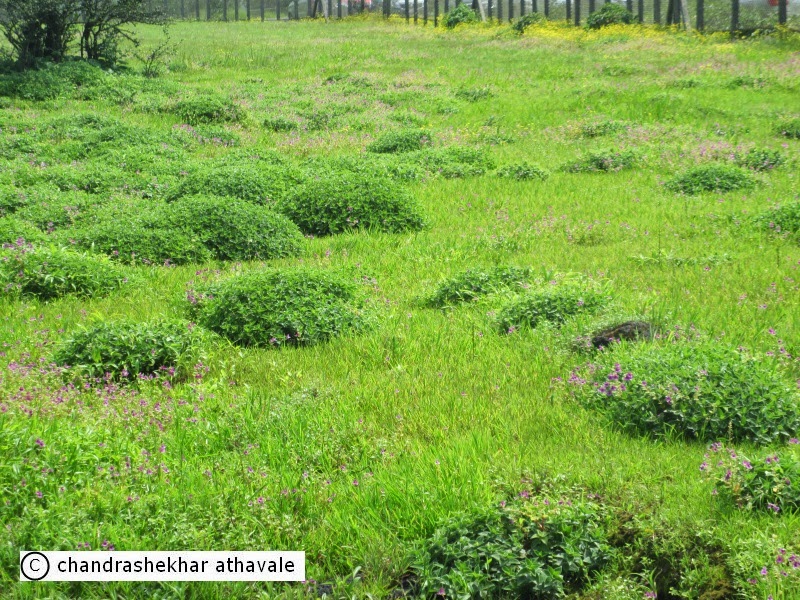 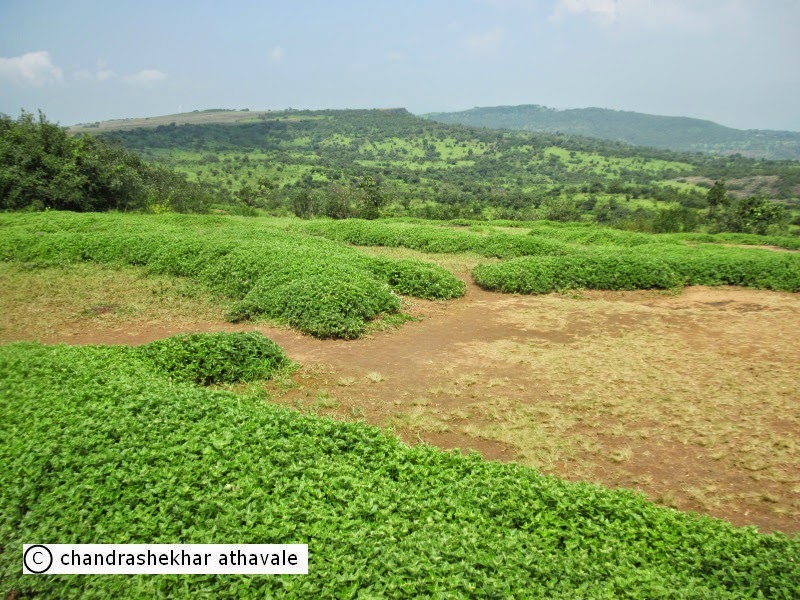 On my right the flatland is now giving way to a slope leading to valley, where I can see a huge reservoir of water. This one has been formed by a dam built on “Kanher” river. On the sloping ground, I can see a strange looking shrub. It has a perfect dome like shape and looks alike a round wicker basket kept upside down. This is supposed to bloom only once in seven years and the blue flowers produce a type of honey considered medicinally important. It is called as “Topali Karvi” or “Kharwar” or “Bukra ( Strobilanthes sessilis), 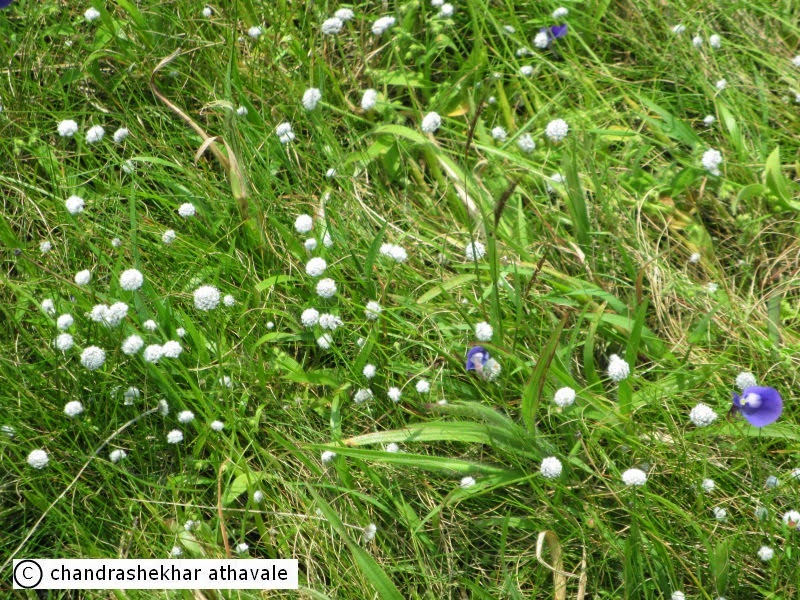 The sea of purple pink Impatiens has now given way to white globules. These balls of white flowers look like dots on green background. The balls are actually clusters of small white flowers, bundled together like a ball. Known as Eriocaulon or “Genthe” ( Eriocaulon stellulatum).

Ahead of me is a rocky patch. We decide to pause here and get our scattered group together. The kids are running around, being very curious and their parents rushing around trying to keep a tab on them. The single ladies are engrossed in some serious talk. I hear a few words, while passing by them. The talkative one is telling them about her experiences in Atlanta. The IT guys are taking snaps with their expensive cameras with giant sized zoom and close up lenses/ Their poses bring smile on my face. I can see a guy with his head almost dipped in a shrub, another one is lying down on ground, next to a flower. 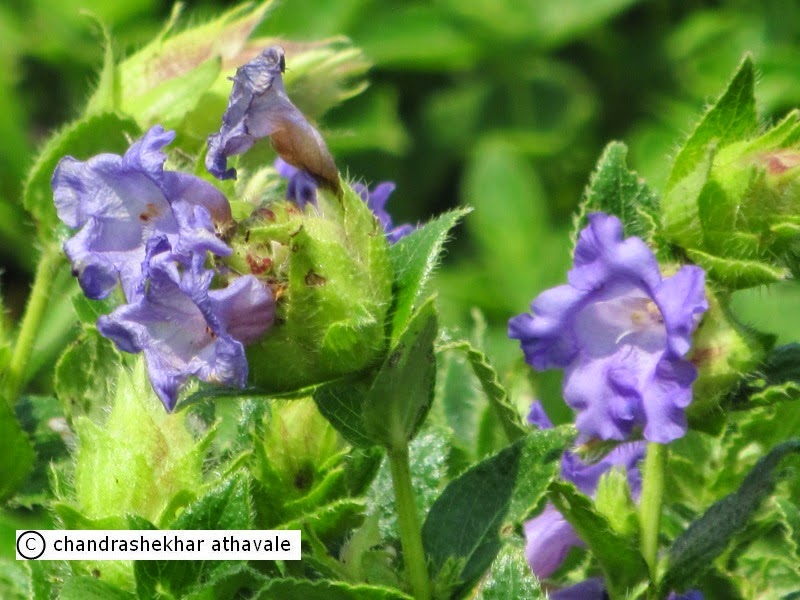 After an interval, the group reassembles and we continue to walk ahead. I can see another shrub with hairy leaves and blue cup flowers jutting out of the cream coloured buds. These are “Karvi” ( Strobilanthes callosus) flowers all right. I am very much near the border fence now, which would mean that my stroll in nature's genetic laboratory is almost coming to an end. Then suddenly, my attention is drawn to a small cluster of shrubs with turmeric yellow flowers. The flower has three petals with two of them having large bright red spots that very much look like eyes. The flower sometimes is jokingly called as Donald Duck flowers. These funny looking flowers are known as “Berki” or Smithia (Smithia bigemina). I find a particular flower that looks like a Chihuahua. 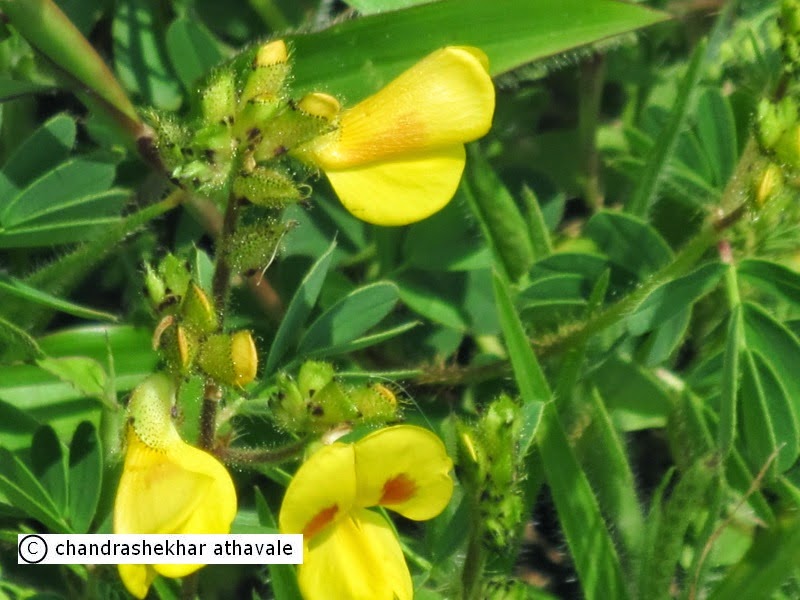 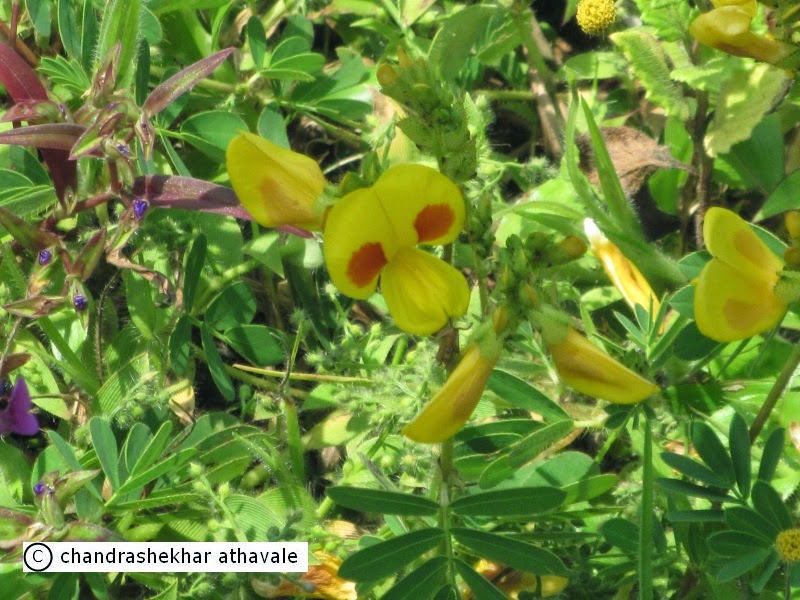 I look at the watch, it's already 1.30 PM, which means that we have spent almost 3 hours in this place without knowing how the time was spent. Even when I have no knowledge of botany, I have found, with an occasional help from an expert, this nature's laboratory to be one of the most intriguing experience, wondering how and why nature creates so many species and keeps them modifying.

Our group waits for the bus, which has been parked at quite a distance. By the time we reach Satara city it's already half past two. We march to a decent place for lunch, where a vegetarian meal awaits us. After the meal, we shall again drive up the western ghat hills, to visit another majestic site before we start our journey towards home.