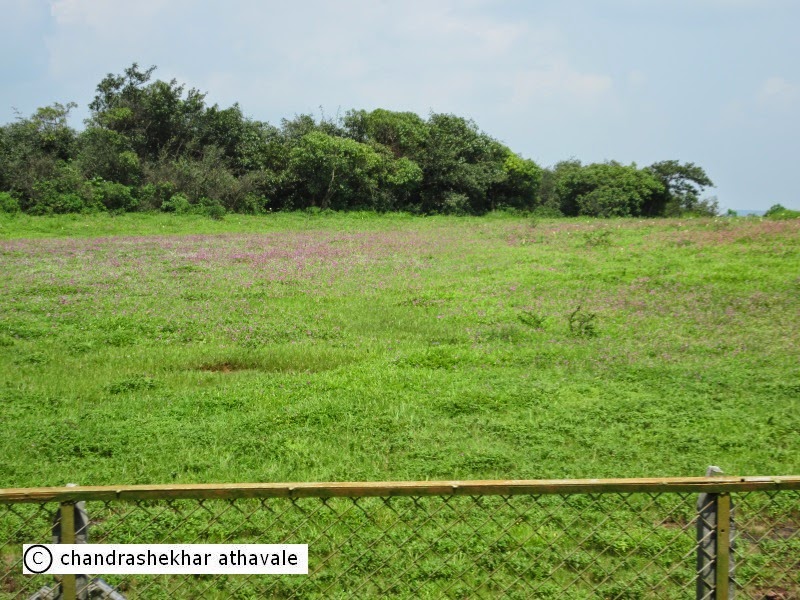 “Kaas” plateau has a kind of soothing, mesmerizing effect on the eyes, before any other thoughts can even enter our minds. The long flat tableland, stretching on top of hills at a height of 1200 meters (4000 ft), lovely lush green meadows with few short trees and a curving road, bisecting the vast flatland in two halves, forms a strikingly lovely picture frame in the mind. The authorities have erected barbed chain link fences on both sides of the road to ban entry of trespassers on the flat lands. This has resulted in strips of reddish looking curbs on both sides of the road stretching to the limits of vision along with the road itself. The road with terracotta coloured side curbs, looks a perfect part of the landscape. 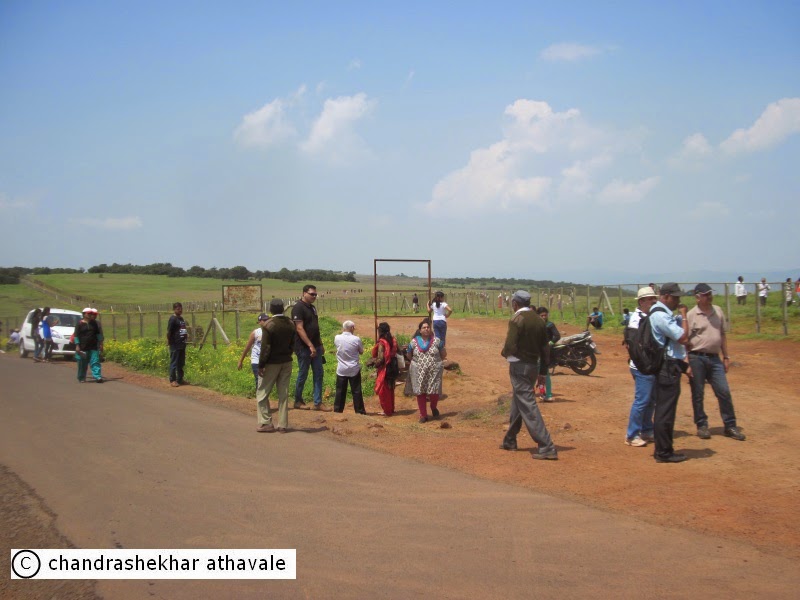 The bus drops us near one of the entry gates. As happens in most of the places related with tourism, I have to pay entry fees separately for myself and for my camera. Latter charged as much as five times compared to the former. There is a regular crowd here. I am surprised at the number of visitors who have come to visit the place. Yet, considering the fact that the flowering season of wildflowers lasts just about 8 weeks and today being holiday, this crowd may not be called as extraordinary. I enter through the gate. I see ahead a vast table land covered not only with lush green turf but island patches of pink and purple.

I notice something strange. There are no tall grasses here at all. Almost all the grasses and other flowering plants are of miniature size, the tallest perhaps just a few inches tall. Apparently this is so because the top soil layer, in which the plants grow, is wafer thin with solid basalt rock below, which in some places is as deep as even 3 Km. This wafer thin top soil does not allow the plant roots to go any deeper and effectively plants just stay dwarfs. 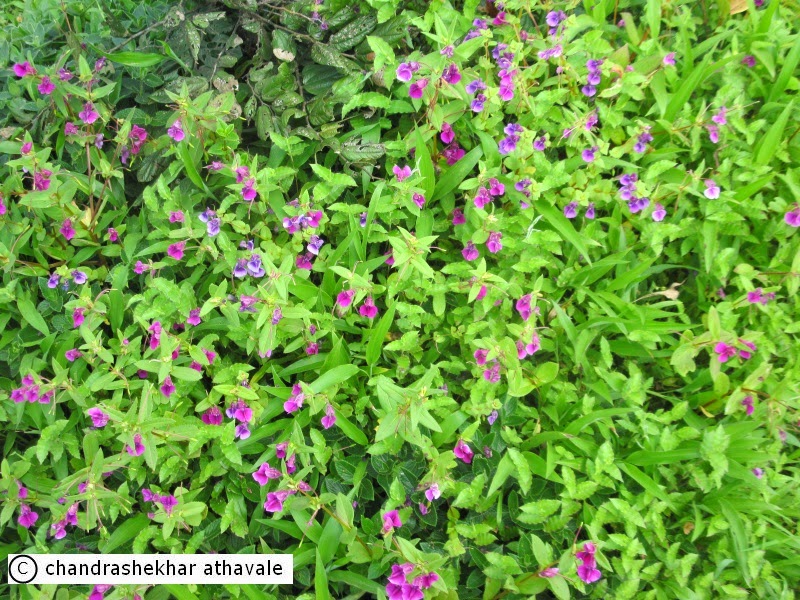 But what is so special about “Kaas” plateau? India's western ghat mountains are spread over 1600 Km length in north-south direction. There must be hundreds of plateaus on this mountain range. However no single reason for this special favour shown by nature to “Kaas,” can be given. It is more like a combination of factors such as rainfall, temperature, humidity, type of soil, topography and micro climate, that have created special conditions here for the bio-diversity of plants to grow. Western ghat mountains get huge amount of rain fall (3000-4000 mm) particularly on the western side, where there are straight broken cliffs. The alternate spells of dry and wet seasons over millions of years has developed cracks in the sedimentary rocks like sandstones, limestones, granites and all pervading basalt and has helped formation of laterites, which are soils, rich in iron and aluminium. Nearly all laterites are rusty-red because of iron oxides. Heavy monsoon rainfall leaches the laterites formed in the rock cracks and brings it to the surface by capillary action. This simple natural process has given the “Kaas” plateau its fertile but wafer thin layer of the laterite soil. 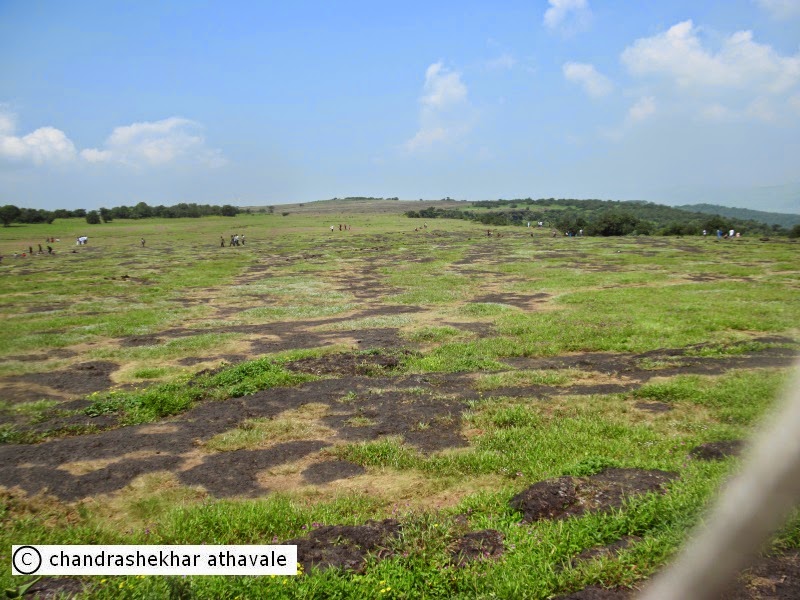 That is why the”Kaas” plateau with its specific environment, has been found endemic by a vast number of plant species (103 numbers), which can not be found anywhere else. The plateau has therefore become one of the most important habitats for hundreds of plant species as as well as a natural hotspot for conservation of biological diversity that is difficult to find anywhere else. Recognising this fact, UNESCO has included “Kaas” plateau in the list of places that are natural heritages of the world. Besides normal flowering plants like Impetiens (Terada), botanists have discovered here many exclusive species of epiphytic orchids and most interestingly insectivorous plants that survive on tiny insects abundantly found here. 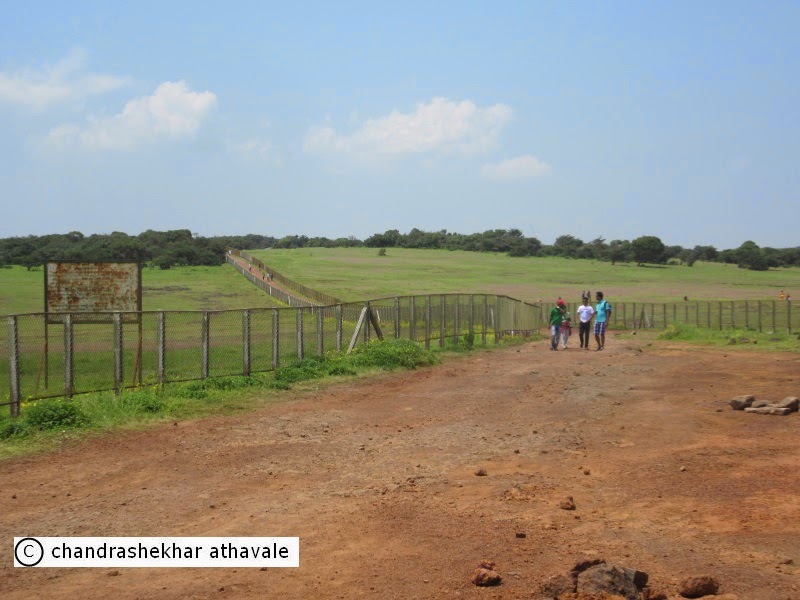 The foremost difficulty for anyone trying to learn about the flora of “Kaas” is that almost all the plant that flourish here are so tiny that unless you are an experienced botanist, it is almost impossible to find the rare plants. Another difficulty is the timing. There are more than 170 individual species and 103 endemic species of plants that bloom here within the entire period of 8 to 10 weeks, with each species in full bloom for 4 to 5 days. This means that during a visit one can see only a few plant species in full bloom. The situation at “Kaas” is therefore always in a flux. A visitor might find the ground turned blue in one week, whereas in the next week the same ground would look yellow. Since I am not a botanist and have come here just to enjoy this fantastic laboratory set up by nature to develop new species of endemic plants, I would be happy to see whatever is in bloom and be satisfied with it. The wildflowers, keeping with the size of their parent plants are also usually very tiny, which means that a casual visitor, who has come here to see some kind of tulip or rose farm is bound to get disappointed. The key to “Kass” is to have patience and expert guidance. 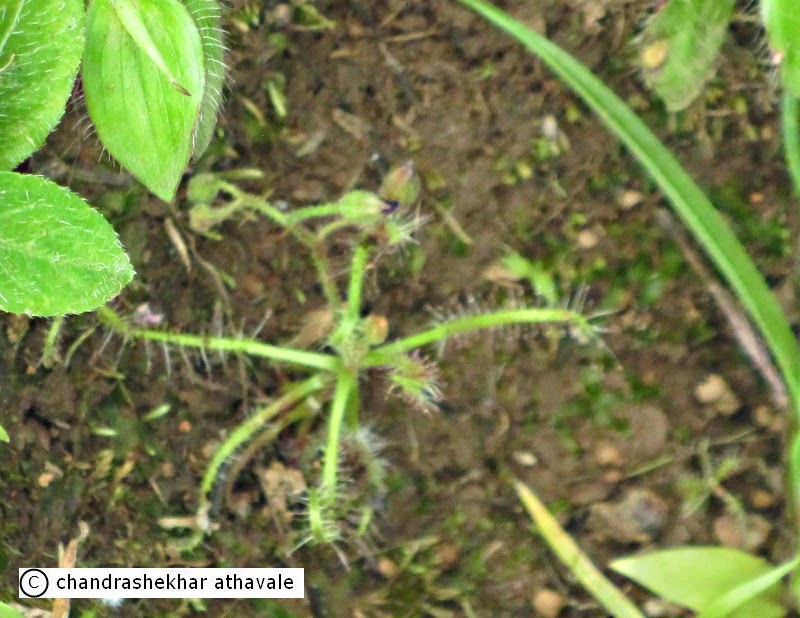 Just near the entry gate, in a small cluster of plants, I find my first 'A” class exhibit, obviously with the help of a guide. It is a tiny plant almost of the size of a large spider. To me it appears more like a small octopus with several limbs projecting out. On each limb there are hundreds of hairy tentacles. The tiny plant is known as “ Indian Sundew, Davbindu” or Drosera ( Drosera Indica) and is an insectivorous plant. The hairy tentacles are fringed with gland tips that produce dots of sticky liquid. The sticky liquid helps trap insects, which are later absorbed. I can see few flower buds but no flowers as it would take few more days to full bloom.

A little further and to the left I can see some lovely purple flowers and I start walking towards them.