Was the eastern reservoir in Dholavira, actually a great bath, like the one in Mohenjo Daro? 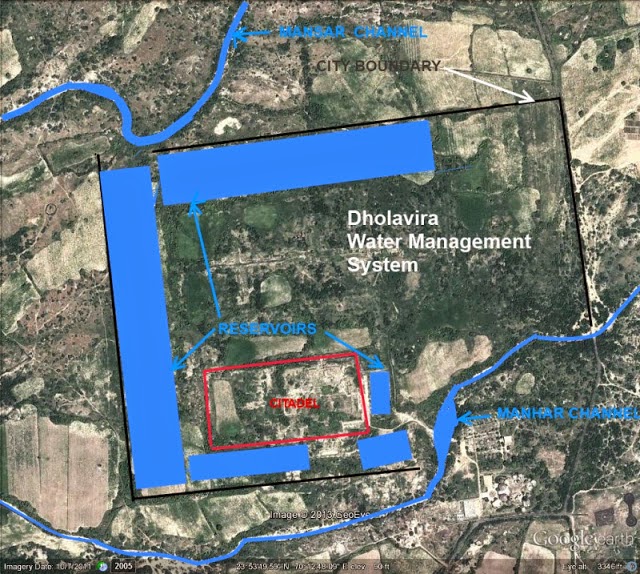 In an earlier article, I have discussed about the water management systems at Dholavira, a 5000 year old ancient city discovered by Indian archaeologists in 1968. It was an important port and a trade hub of the Indus-Sarswati civilization located in the south. It was also probably a regional capital controlling smaller settlements like 'Surkotada' existing in that region. Considering its time period, it can be said that Dholavira was a spectacular metropolis that was well planned and built accordingly. Archaeologists have been able to measure the dimensions of the city and its three main sectors quite accurately and have proved that the length and breadth of each and every sector of the city were planned to be integer ratios such as 5:4 or 4:3.

Dholavira had three main sectors. An Acropolis or an administrative sector (Citadel) consisting of a massive 'Castle' located on the city's high point and an adjacent 'Bailey,' a middle town separated from the administrative sector by a huge ceremonial ground and a lower town. The city accommodated between 15000 to 20000 inhabitants.

Dholavira had no natural sources of surface water like perennial lakes, rivers or springs and the groundwater is mostly brackish and unfit for animal or human consumption, even for agriculture. The only source of potable water remains the unpredictable monsoon rains that flood the two small rivulets in north and south of the city during summer months. This region is almost at the edge of monsoon belt and monsoon failure is not uncommon. Because of this reason that the ingenuity of the Dholavira people really comes to the forefront. In my opinion, Dholavira's water supply, rain water harvesting and sewage removal systems are of such high grade that even today, many Indian towns would be envious of these.

Realising the critical importance of water for the city dwellers, Dholavira's planners had allocated as much as 10 hectares or 24.7 acres of land for creation of water reservoirs. According to conservative estimates, these tanks could hold 300,000 cubic meters ( 79,250,000 gallons) of water. Not satisfied with this storage, additional water storage was created outside the fortifications and floors of many reservoirs were provided with deep depressions or troughs, where water could remain in exceptionally dry years. A simple calculation shows that for 15000 inhabitants, more than 54 liters of water per day was provided by the city planners. Even today, not many places in India can match this figure. Out of all six water reservoirs built around the city, perhaps the best was the tank on the east side. It was found to be the largest, grandest and best-furnished reservoir of rectangular shape measuring 73.40 m N-S and 29.30 m E-W (ratio 5:2) at the top while above that there should have been a 1 to 1.20 meter high embankment as evidenced at four corners. Its floor was excavated into three levels the deepest of which was 10.60 meter as has been ascertained so far. At three corners, the north-western, north-eastern and south-western, it was provided with a flight of 30 steps each for the people to walk down to approach the water.

It is however not known whether this tank was for water storage or it was used as a public bath like the one at Mohenjo Daro. The Great Bath of Mohenjo Daro was found to be 12m in length, 7m in width, and 2.4m in depth. Earlier archaeologists had thought that perhaps this eastern reservoir was just a water storage like the tanks to the north, west and south. However there are number of reasons that suggest that the eastern reservoir could have been actually a great bath. Some of the reasons can be listed as under.

Though a waste-weir in the tank still remains to be investigated with more excavations. A rock cut well with a few rock cut steps and a stone-made enclosure of a later date, was found inside the tank in the southeast corner. 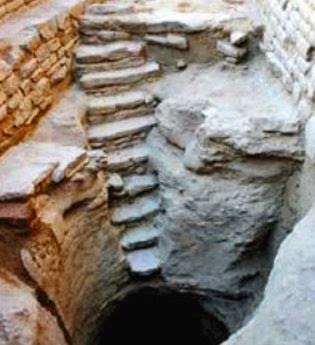 Archaeological Survey of India believe that a huge lake and an ancient shore line could be buried under the site. With this new thinking and availability of new and modern investigating equipments like 3D laser scanners, remote sensing technology and ground-penetrating radar systems, there is a rebound interest to investigate possible existence of other reservoirs and stepwells, buried in Dholavira, as well as the advanced hydraulic engineering used by Harappans for building the stepwells. Archaeologist are expected to start new investigations again in upcoming winter.