The quest for light 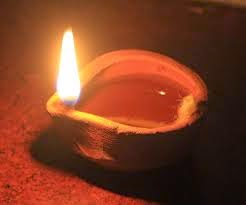 A phrase from the third verse of the Book of Genesis says : “And God said, Let there be light: and there was light.” Though Bible offered a simple explanation as to why there was light, it could not solve the practical difficulties of early cave dweller humans, when night fell after every 24 hours. Absence of light converted their familiar day time world into an unknown quagmire, full of dangers. Lighting a fire was a solution, but a bonfire could be lit only on an open ground outside the caves and only when it was dry. When the rains came down, the darkness would prevail and could not be mastered at all.

First break-through came about 17000 years ago, when humans found out that they can create light, by burning animal fats and oils in a lamp. Later, when crude petroleum oil was discovered, the organic fats and oils could be replaced with it, newer designs such as lanterns were evolved, but basic technique remained same. Till middle of nineteenth century, this method remained the only way by which humans could overcome darkness of night. The early oil lamp was later replaced by gas lamps mainly in Europe, where a metal oxide mantle was heated by means of a flame burning some kind of gas. 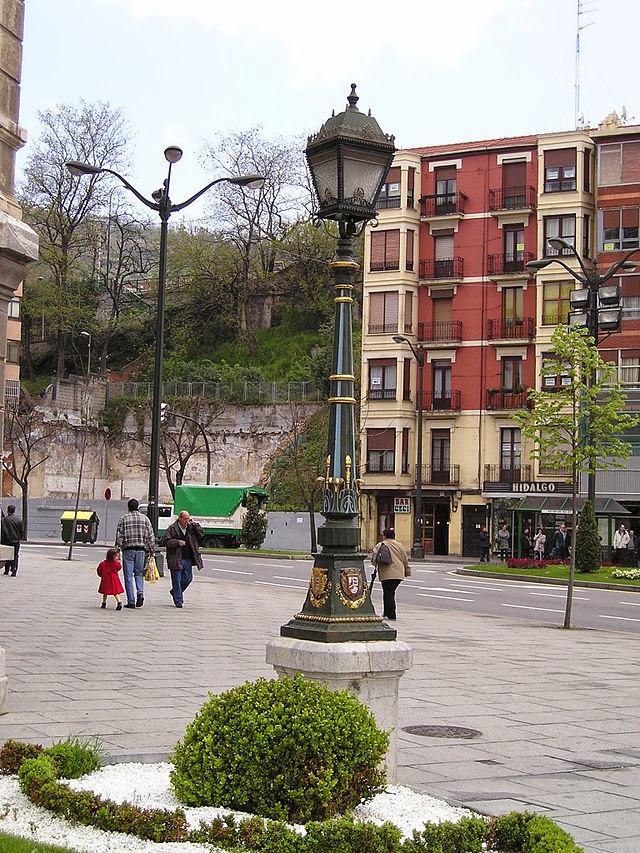 In the later half of nineteenth century (October 22, 1879 to be precise) an American scientist, who had come out with many inventions before, gave the first successful demonstration of a commercially practical incandescent light using a carbon filament and which produced light from electrical energy. Thomas Alva Edison's light bulb, being a long lasting, practical light source, almost revolutionised the world, removing the fear of darkness from human mind. Light bulb was such a great invention that even to date it is being used. 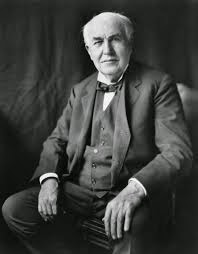 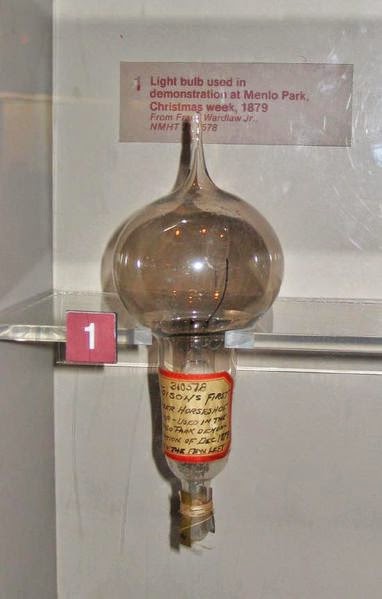 Light bulbs, though produced light that was soothing and comforting to human eyes, had two major shortcomings. Firstly they also produced heat besides light. Secondly because of this generation of heat, also converted from electrical energy, they were very poor energy convertors with low conversion efficiency. 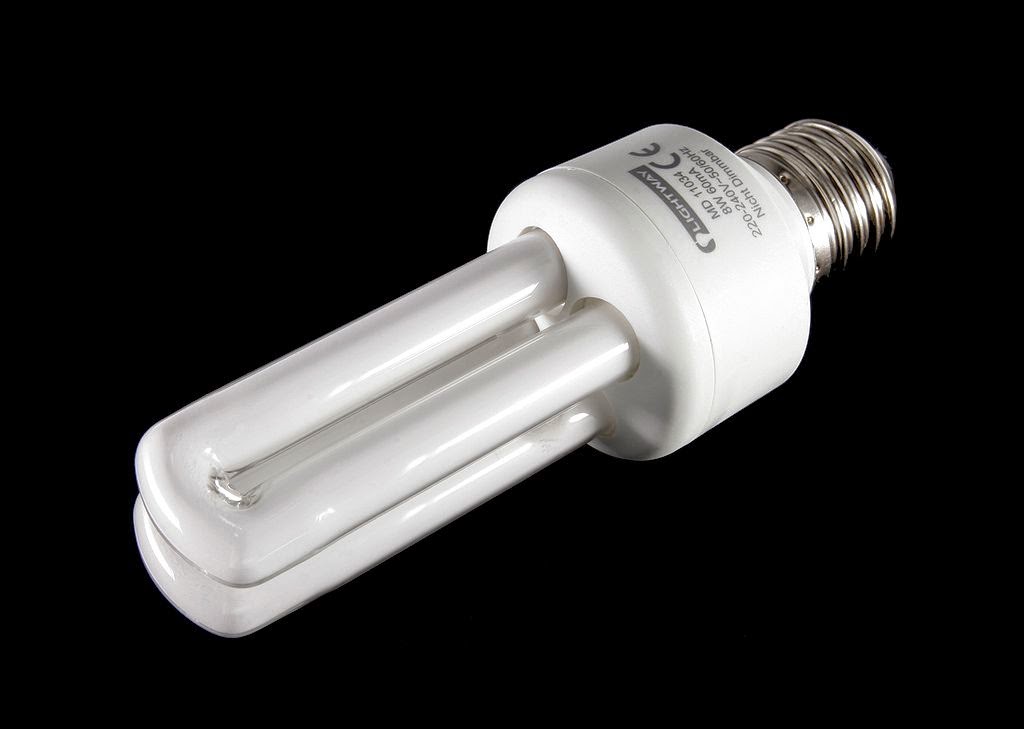 In the middle of nineteenth century, experimenters had observed that when electric current is passed through a partially evacuated glass vessel containing certain gases a radiant glow emanates from the vessel. This observed phenomenon was converted into a light source later, almost hundred years after birth of electric bulb, in form of a fluorescent lamp tube filled with a gas containing low pressure mercury vapor and argon, xenon, neon, or krypton. The inner surface of such lamps is coated with a fluorescent coating made of metallic salts. When an electric voltage is applied across the tube, the gas ionises and the electric ions produced, hit the fluorescent coating, which results into a bright light glow. Fluorescent lamps produce a brilliant white light suitable fore human eye to concentrate and are very energy efficient as they produce little heat. During last decade, compact fluorescent lamps (CFL), working on the same principle as fluorescent lights have become very popular because of their better energy conversion capability, though the quality of light produced by these can not match the ordinary fluorescent tube. 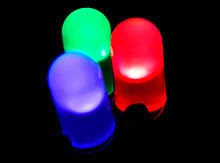 In the year 1907, a strange phenomenon was discovered by a British experimenter, H. J. Round of Marconi Labs, using a crystal of silicon carbide and a cat's-whisker detector. He found out that the passage of an electric current or presence of a strong electric field made certain materials emit light. This phenomenon was named as Electroluminescence. Based on this physical phenomenon, the first device that emitted red visible light, called as a light emitting diode ( LED), was developed in 1962 by Nick Holonyak, Jr., working at General Electric Company. This was followed ten years later, by the discovery of Yellow coloured light emitting LEDs by M. George Craford, a former graduate student of Holonyak, who also improved the brightness of red and red-orange LEDs by a factor of ten.

Initially the cost of producing LEDs was very high, but research done by US corporations like Monsanto, Hewlett Packard and Fairchild semiconductors, brought down the price below 5 cents in US. These LEDs had very limited use then only as indicator lights and parts of digital displays, essentially because of the red and yellow colours they produced and low light intensity, which was later slowly increased.

The light that we require for general lighting purposes, where we work and study has to be pure white. Pure white light can be produced by mixing red, yellow and blue lights but since the blue light LED's could not be produced, white lamps buuilt from LEDs were impossible. The challenge of devising blue LEDs was left unanswered for three decades. 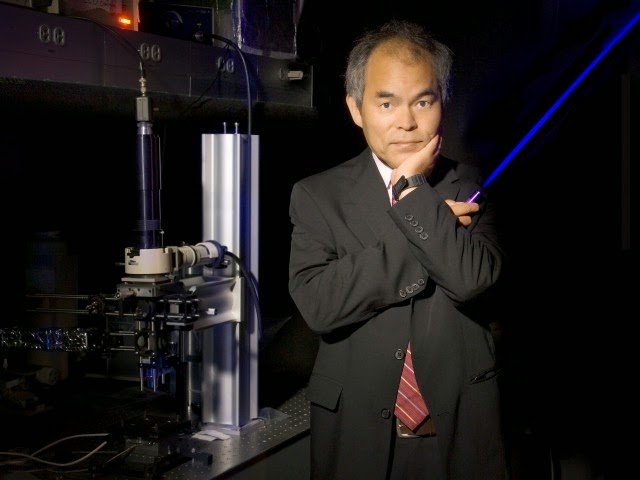 The first high-brightness blue LED was demonstrated by Shuji Nakamura, a naturalized US citizen of Japnese origin and now a professor at the University of California, Santa Barbara. He had joined Nichia Chemicals, a small Japanese company based in Tokushima after his master's in 1979. Nakumara developed the blue LED on his own in 1993 after Nichia had ordered him to suspend work on it, claiming it was consuming too much time and money.

Sapphire substrates, which Nakumura had used for his demonstration ( one of the most critical components), was developed by two Japanese scientists Isamu Akasaki and Hiroshi Amano while working together at the University of Nagoya. Akasaki, born in 1929, is currently a professor at Meijo University in Nagoya, while Amano, born in 1960, is a professor at Nagoya University.

Nakumura left Nichia Chemicals in 1999 and in 2001 sued Nichia, because he was paid just $180 as bonus for the invention, when he found that his company had secured lucrative patents for his invention and had gained substantial profits. Finally, Nakamura got $8.1 million from his former employers in 2005 for his invention. 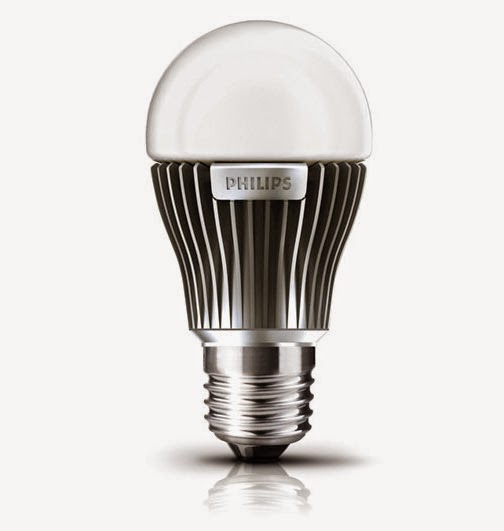 The discovery of Blue LED, not only made it possible the production of LED bulbs producing pure white lights, but also revolutionised many other products such as LED backlit- TV's, Computers and Phone- Screens, Water purifiers for sterilizing polluted water and Greenhouse Cultivation lighting. New LED lamps emit a bright white light, keep doing so for tens of thousands of hours and use just a fraction of energy compared with the incandescent light bulb pioneered by Thomas Edison in the 19th century. The most advanced LED lamps now consume nearly 20 times as little electricity as regular light bulbs and their performance is improving constantly. 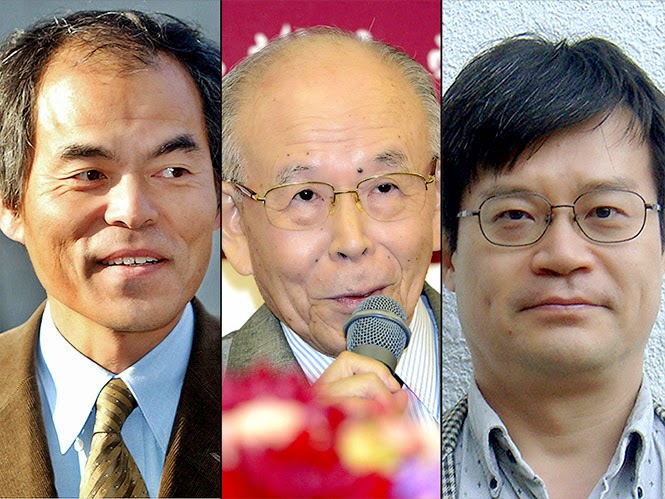 Readers might recollect that 2013 Noble award for Physics had gone to Peter Higgs of Britain and Francois Englert of Belgium for the discovery of the “God particle.” Their work was more fundamental, whereas work done by this year award winners, have made our lives greener and better.