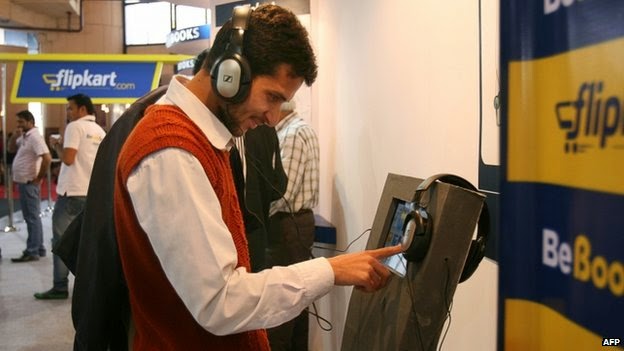 In spite of the widely perceived image as a flop show, India's three e-commerce biggies, appear to have actually managed to gain, as they have achieved huge sales and an image makeover, just at the beginning of the festivals season, uprooting the off line retailers doing business in the traditional fashion by displaying goods in show rooms. A friend, well connected with the electrical appliances trade told me that almost all the retailers are aghast to see, customers shunning their show rooms packed with goodies, all ready for the festival season. 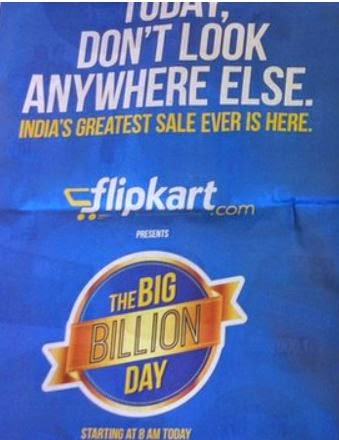 It all began last week, when one of the big e-retailers in India, Flipkart advertised a special one day sale on 9th October and called it as the "Big Billion Day." It was supposed to have been India's version of Black Friday ( a day when US retailers offer mega discounts at the start of the Christmas shopping season). Flipkart had announced that it would be offering massive discounts, across a whole range of items. Some of the deals on offer were real crazy like Karbonn cellphone at 1 rupee (original price 2,499 rupees), the Samsung Tab 2 at 1,390 rupees (original price 13,900 rupees), hand blenders at 1 rupee (original price 1,995 rupees) and JBL headphones at 99 rupees (original price 5,490 rupees). 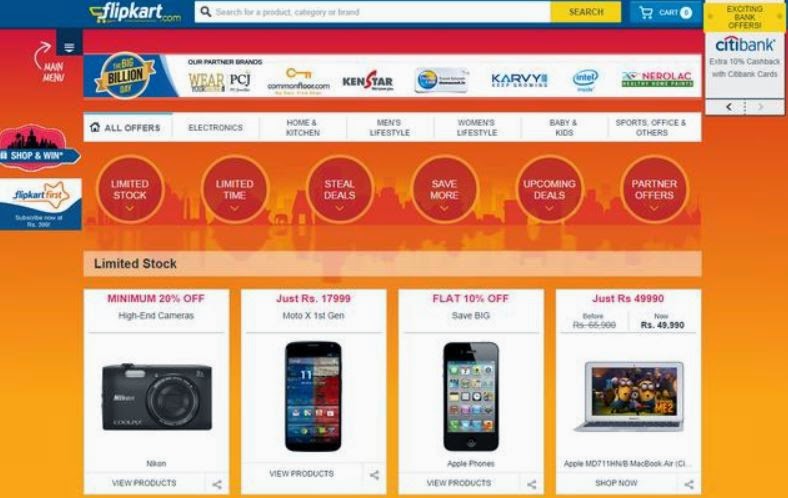 The sale was to begin at 8 AM, but as thousands of enthusiastic buyers tried to log in, all hell broke loose, as things didn't exactly go to plan. The big rush crashed Flipkart's servers. Customer screens showed, items sold out within minutes, errors and payment page freezing. The things became so bad that Flipkart founders had to publicly apologize for the fiasco and say sorry in a lengthy email to angry customers, who felt cheated. They tried to assuage the feelings of many frustrated and furious customers by accepting that Flipkart was not able to anticipate the glitches at the beginning of the sale. The media declared the sale as a flop show and even called the company as “Flopkart.” It was clear that Flipkart was the talk of the town that day, but for all the wrong reasons. 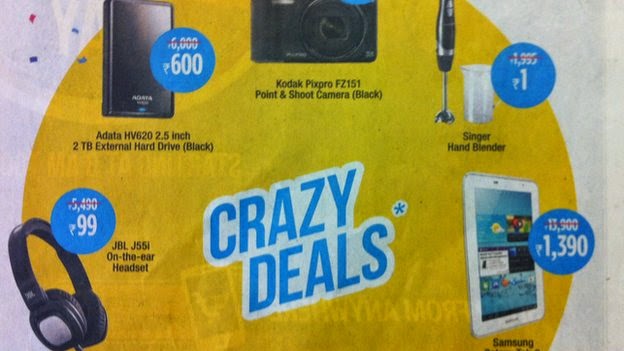 It now appears however, that things did not go that bad at all. Flipkart has now announced that they achieved a billion hits and managed a sale of 6 Billion Rupees (US$100 Million). This is indeed something extraordinary, when we compare it with their last year's registered sales of US$1 Billion achieved over entire year.

Surprisingly, Flipkart's two main competitors, Snapdeal and Amazon also seem to have gained. Snapdeal announced that it sold goods worth 10 million Rupees for every 10 minutes on that day. We need to accept that Flipkart's Friday blitzkrieg, did prove one thing emphatically. India's e-retailing business is no longer a nascent market, hampered by reasons like low penetration of broadband and poor logistics infrastructure in the country. Flipkart has changed all that and its competitors also have gained automatically in market perception. No one can now write off India's e-commerce market any more. 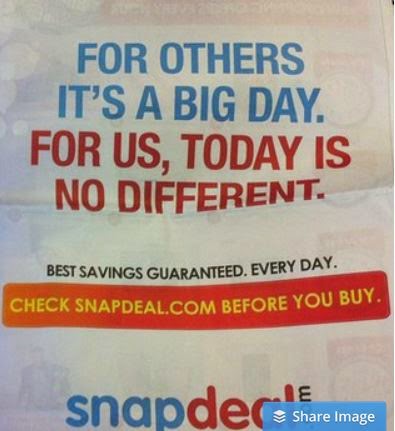 After the mega show is over, market analysts knives are out now. They feel that  since Flipkart has sold goods at such low or discounted prices, it is obvious that they could not have made usual profits. Its one thing to gain in market perception and image, but profit numbers would not show any gain in the accounts, even assuming that supplier companies have given the goods to Flipkart at special prices for a day. Would these supplier companies take care of the repairs and maintenance? Would there be a valid warranty? We may find answers to these questions only later with actual experiences in the field. If they do not give proper support, would it not damage Flipkart's image as a reliable supplier?

About a decade ago, when big retailers like “Croma” appeared in India, who offered many varieties of white goods at lower prices, many buyers had found out that the installation and maintenance, usually offered by somebody else, contracted by the retailer, was not up to the standard. Presently the usual practice is that the manufacturing company offers these services to the customer with the retailer having nothing do with it. It is possible that good sold on Flipkart may also be serviced in the same fashion, but when goods are offered at such low cost, would the manufacturing companies agree to offer same quality free service for an year?

Then there is a question of financial impact also. Supposedly Flipkart has not made usual profit on Friday's sale or actually has even lost money in it, who would bear the cost of this image makeover show? Would it be the shareholders or financiers to the company? These are some of the questions that are being asked by analysts.

One thing however, has to be accepted. Flipkart has managed to establish itself along with its competitors, Snapdeal and Amazon firmly in the Indian market with this show. It has done it at the great cost to off line retailers, who may find selling in the future more and more difficult. An interesting question is that would this mega show change forever the way in which Indians do their shopping? Only the time would tell.