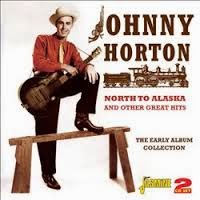 This week we have a song that has a distinct country music touch. "North to Alaska" is a 1960 hit song recorded by an American country music and rockabilly singer most famous for his semi-folk, so-called saga songs, Johnny Horton, which featured in the movie of the same name. It topped Billboard magazine's Country Singles chart, reached number four on the Billboard Hot 100 chart and eight on Norway Singles Chart.

In a sad turn of events, Horton died shortly after the song was released.


If you can not see the embedded video on your android devices, here is the link. http://youtu.be/JSt0NEESrUA You can also copy and paste the link in your You Tube App. If that also does not work, search You tube,North to Alaska, Johny Horton
5th October 2014