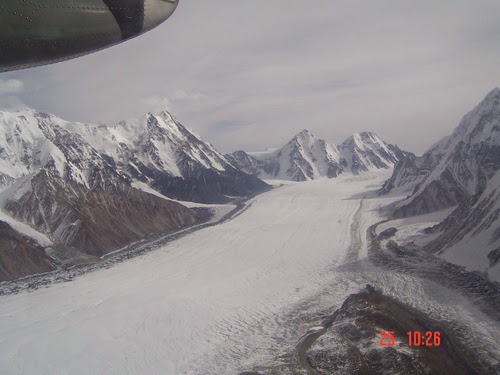 A senator from Pakistan's Muslim League Quaid party and chairman of a Parliamentary Panel; Mushahid Hussain Syed has come out with a report about one of the friction areas between India and Pakistan, namely the Siachin glacier. The report actually has no reality basis and is like flogging a dead horse. Before considering, why this report is a lame duck, let us find out some details about the Siachin glacier and why it is so important.

Jammu & Kashmir state of the Indian Union has been involved in a quagmire of controversy, ever since the Maharaja of the erstwhile kingdom, signed the instrument of accession in 1947. This state, even before accession to India, always had international borders with China on east and Afghanistan in the north. In 1947, when British India was divided into Pakistan and India, the state was attacked by Pakistan army invading under the disguise of Tribal warriors from Northwest. After the accession to India, Indian army had to land in Kashmir and fight back the invading Pakistani army. In this war, most of the Kashmir valley was won back by Indian forces and Pakistani forces were forced to retreat to west of Pir-Panjal mountains. Pakistan continued to hold the Baltistan region in north of Ladakh. The Prime Minister of India then refereed the matter to United Nations Security Council. After that, Pakistan has embarked upon three unnecessary wars with India over Kashmir. However, today, after 65 years, the Indian and Pakistan forces keep holding the same positions in spite of these three wars. 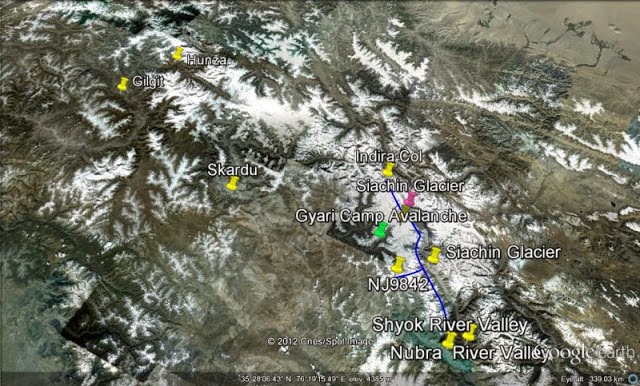 If we study the geography of the state of Jammu & Kashmir, it can be seen clearly that four mountain ranges divide the state into four natural parts. All these four mountain ranges run in southeast to northwest direction. The Jammu region adjoining Panjab state and the Kashmir valley are divided by Pir-Panjal range. The Nun-Kun mountains to the east of Kashmir and the Zanskar range box between them the Zanskar valley. Ladakh plateau lies between Zanskar ranges and Ladakh ranges. To the north east of Ladakh plateau and the south Karakoram ranges, the Shoyok and Nubra vallys are the last areas of habitation. To the east of Karakoram mountain lies the Tibet region. To the south end of Karakoram mountains and to the east of Leh city, the famous Karakoram pass is located. Till 1950, this was a trade route between India and Xinjiang province of China.

The LOC between India and Pakistan, crossing all these mountain ranges except Karakorams, ends at point NJ9842 roughly to northeast of Leh city but to west of Karakoram ranges. According to Shimla agreement, since entire region east of this point and right up to Tibet, consists of inaccessible mountains terrain and glaciers, both the countries had then decided to keep this as no man's land. India had assumed that this line eventually would go along the Soltoro ridge keeping Siachin glacier within India till a point on Rimo glacier, where it would meet the Chinese border. Pakistan according to its convenience decided that this line would run west to east from NJ9842 to Karakoram pass. This would have enabled Pakistan to connect the regions of Skardu and Baltistan straight to Chinese borders.

Pakistan started allowing foreign mountaineering expeditions in the Siachin region and the first Japanese team carried out an expedition there in 1978. Pakistan's idea behind this permission was a clever one. It was thought that once the international expeditions come to know that Pakistan's clearance is all that they require , internationally it would be assumed that it is a part of Pakistan. When the Indian army headquarters came to know of this development, they started sending Indian army teams to Siachin region in summer. The plan was to dissuade any foreign mountaineers from climbing in Siachin and tell them that they have entered unauthorizedly into Indian territory. 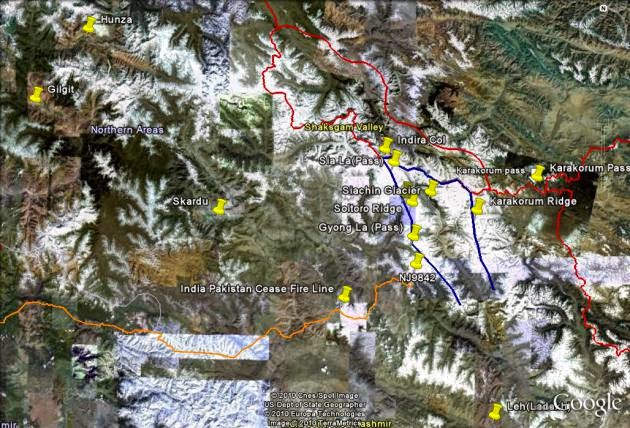 How is the Geography of this region, where Siachin glacier is located? Some authors have called it as the roof of the world. Some call it as the third pole. This glacier flowing at an avarage height of 15000 feet is spread over 72 KM. On both sides of this glacier snow clad peaks of the Karakoram up to 23000
feet tower above the glacier. The south Karakoram ridge extend on the east side whereas Soltoro ridge extends on the west side. Biting cold snow blizzards and winds blow here all the time. In winter the temperatures drop down to -40 degrees Celsius. Indian army HQ realised that if this region is to be taken under military control, it would be necessary to control the peaks on the western side or the Soltoro ridge. Otherwise Indian soldiers on the glacier would be just sitting ducks for the enemy and would be practice targets. It was a very tough task as establishing army outposts at such heights was not easy at all. In spite the advercities, Indian army was successful in establishing series of outposts on the Soltoro ridge by March/April 1984. When Pakistani soldiers arrived in this area again in the month of May, they found that Indian soldiers have occupied all the poasses leading to Siachin namely Sia La, Bilafond La, Gyong La and Chulung La. When it was realised that all the Siachin passes are now controlled by India, Pakistani soldiers retreated and established outposts on the western ridges of Soltoro. After this the war broke out.

To capture outposts on Soltoro ridge is an impossible task for any infantry unit and Pakistan army failed in their objectives totally. Since 1984 the military situation has remained more or less same till date. India controls Soltoro ridge, Siachin glacier, all passes that lead to the glacier and major parts of Shoyok and Nubra river basins. . If we study the geography of this region, the importance of Siachin can be easily appreciated. From Soltoro ridge, the Pakistan occupied Skardu region is just 40 miles away. The Siachin is shaped like a dagger into north and India's control over Siachin is perhaps the biggest headache for any expansionist plans of Pakistan. To secure this region, controlling Siachin is essential. There can be no two opinions about it.

Pakistani army has several bases and forward posts in this entire area. Pakistani military headquarters was located at Gayari in a deep valley( most of the peaks around are above 20000 feet high ), with an height of 3,775 metres (12,400 feet) above mean sea level. The Gayari base, which was about 40 miles north of Turtok, the last village under Indian control, and about 40 miles west of Siachin glacier, was one of the most important Pakistani bases in the area. It was a vital supply hub for troops and materiel passing through to more remote bases, and was not far from a military hospital. Recently, base was occupied by soldiers of the 6th Northern Light Infantry battalion, a unit "trained in mountain operations". Avalanches are very uncommon in the area of Gayari. Because of this low avalanche risk, Gayari was a bigger complex and housed many more soldiers than other bases in Pakistan controlled area west of Siachin. 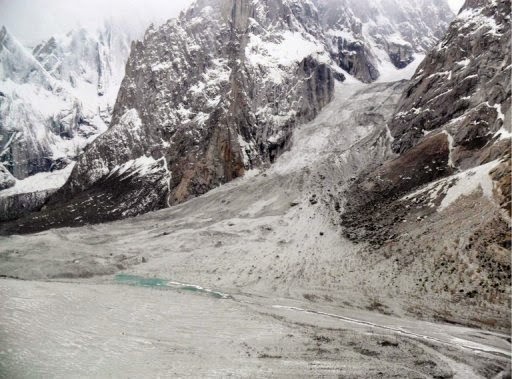 On 7 April 2012, a massive ice avalanche struck this base , which originated from a point 4560 meters above sea level and at a distance of about 1300 meters from Gayari camp. The winter of 2011–2012 in Kashmir was unusually harsh, marked by numerous heavy snowfalls and sharp temperature drops. Due to this reason or something else, the entire mountainside just slid eastwards, towards the camp and Battalion headquarters was instantly buried deep in soil. The avalanche was so massive that the camp covering an area of 1 square KM was buried under 21 meters or 70 feet of snow, which made the rescue efforts almost impossible. As per official reports of Pakistani Army says that 124 soldiers, including a Colonel and a commander as well as 11 civil labourers were buried deep down.

Ever since this tragedy, there has been a demand in Pakistan to reevaluate the Siachin strategy. Pakistan's then Army commander, also had made some suggestions in this direction. It appears that the Parliament panel headed by Mushahid Hussain Syed was appointed to address this concern because the panel's report clearly mentions this fact as;

“We should learn from the Gyari tragedy, which resulted in the loss of 140 lives. The tallest post is at the height of 22,000 ft and it takes 21 days of slow climbing to reach the peak. There are specially trained troops, who can survive such harsh living conditions, with temperatures that dip to minus 50 degrees. 90% of casualties are caused by the severe weather, which includes frostbite, lung and chest diseases, loss of memory and depressive episode. The most difficult moment is when a soldier falls sick and he has to be evacuated, which is a major logistical exercise.”

This is all fine, however instead of suggesting some direction to strategic thinking on this subject for Pakistan army, the report only suggests that both countries to collaborate on environmental issues, climate change and global warming and that both sides should find a formula for pulling back their forces from positions in the icy mountain, with Siachen being converted into a peace park where mountain tourism and expeditions could be encouraged under the supervision of the United Nations.

India is least likely to take even a note of this report, because in the first place, the entire region of Baltistan and Hunza can be watched clearly from Saltoro ridge. Any collaborative activities between Pakistan and China can be monitored from here. For India, it is a very advantageous position. Secondly there happens to be another more important strategic reason. Upto 1950, trade was carried through Karakoram pass between India and central Asia and Russia via Xinjiang. There are excellent possibilities of this trade route opening again in future. Once the Rohtang tunnel on Manali-Leh road is completed, this highway would be an all weather road to Padm and Leh in Ladakh, which would mean that a trade route through Karakoram pass would be in the realm of reality. But for this to happen, this entire region has to be secured militarily. This can be achieved only if Soltoro ridge and siachin are firmly in India's hands. The presence of army there, whatever may be the cost, is essential for the future. The report of the Parliamentary panel of Pakistan therefore is most likely to be a fool's errand.