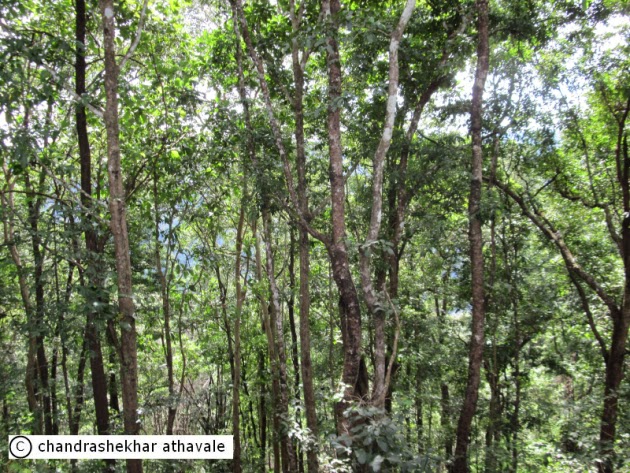 Western Ghat mountain range (Sahyadri mountains) is one of the major mountain range system of the Indian Sub continent. Located at an average distance of sixty to seventy (definitely less than a hundred kilometers) from the Western Sea Board of India, the Sahyadri mountain range extends in the North-South direction for sixteen hundred Kilometers from Nashik (Maharashtra state of India) in the North to Kanyakumari. (Southern tip of Indian sub continent). The mountain range is endowed with superb tropical rain forests on both sides, extending almost to the sea shore, in few places.
There are two ways from the North, to approach the jungles of the south Sahyadri mountains. The first route, which appears on the map as the easiest and simple, is to take the Mumbai-Goa highway near Panvel and travel up to Goa,where the road continues as National Highway 17 to reach Ankola town. At Ankola, turning left on National Highway 63, takes you to Yellapur town, which is located in the heart of the jungles of southern Sahyadri mountains. This route is actually a pain in the neck, as far as motoring is considered. This highway, in most places, is just a two lane road with very heavy traffic consisting of all sorts of vehicles and is a nightmare to drive. The other longer route is to take Mumbai-Pune expressway and then continue along the beautiful Pune-Bangalore highway right up to Hubli town and then turn on the National Highway 63 to reach Yellapur.

I am on my way to Yellapur town, which is about seventy kilometers away from Hubli city. As I leave the hustle and bustle of the city behind me, the road passes first through a rich agricultural tract, with standing Jowar and other crops almost ready for harvesting. After another ten or fifteen kilometers, the landscape starts changing rapidly. Fields with standing crops are still there, but now I can see only paddy fields everywhere around me, lush green in few places and ripened to golden yellow in other places. As I travel further towards Yellapur town, paddy fields appear more and more intermittently, mingling seamlessly with beautiful bluish ponds, grass and isolated patches of tall trees. Slowly the huge tall trees start dominating and substitute for everything else. Very soon I am in the midst of a thick tropical rain forest. There is nothing really to see on either side of the road now, except for countless number of huge trees with large leaves, small leaves, whitish leaves and blackish leaves. There is a very heavy undergrowth of shrubs and grasses in the open spaces below the tress. Once in a while, a dried trunk of a tree lying on the ground and covered completely with creeper plants, projects out like a sore thumb through the undergrowth.

Soon I reach Yellapur town. I decide to have a cup of the tea in a roadside cafe. The town itself is just an ordinary Indian town with relaxed atmosphere. The cafe owner is not very communicative in spite of my best efforts. I drink my tea rather quietly and proceed further. From Yellapur, we branch off to a smaller and badly pot holed road, which leads to another town called Sirsi.

I have made reservation in a jungle resort located somewhere along this road. A narrow track covered with red soil leads me to the resort built in an opening right in the middle of the jungle. Surprisingly, there are a large number of coconut and aracknut trees spread all around this place. Neat little cottages stand in two rows to house the visitors. A larger building on a side perhaps is the dining hall. The resort claims to provide all modern facilities like electricity, running hot water and cable television. However I soon find out that these modern day luxuries are dependent on couple of cables and electrical lines brought all the way from Sirsi town and at slightest vagaries of the mother nature are likely to go out of function. Yet this uncertainty does not bother me much as the place has a built in calm and relaxed atmosphere, which somehow makes me realize the unimportance of any of these modern day requirements. After a much delayed lunch, I doze off a little in the supreme serenity of the surroundings and wake up completely freshened up from a rather tiring road journey. The time is is around 4 PM . The dark shadows of the surrounding tall trees have already started to grab the open spaces even though the sunset is still couple of hours away. I am served a cup of hot tea and told to be ready to visit a nearby Tibetan Manastery. There are two large Tibetan monasteries in Karnataka. One is located near Kushal Nagar in Coorg district and the other one at Mundgod village, which is not very far off from my resort. Since, I have visited the Kushal Nagar monastery about a year back and have also visited number of Monasteries in Ladakh very recently, I am not greatly interested in this visit. Finally I decide to go along.

After Chinese take over of Tibet in 1955, a large number of Tibetans, including the Dalai Lama escaped to India from Chinese communist rule. Many of the immigrants were given land and other facilities by Government of India and were settled in the two colonies in Karnataka state. Tibetans settled in Mundgod village have built this monastery and is known as “ Gaden Jangtse Thoesam Norling Monastery”.

The Monastery prayer hall building is huge with curved stair case on a side. A climb up leads me to a large main prayer hall or Du-Khang of the monastery. At one end of the hall, there is a raised platform. Several idol figures are arranged behind a huge glass show case. I can easily identify the Maitreya Buddha and Tara idols. Huge painted banners, displaying brightly coloured paintings of the four guardian kings of the cardinal directions and other paintings of religious significance adorn the side walls and the spaces between the idols. As I leave the hall, a gong starts striking repeatedly with a booming sound. Suddenly the sitting places in front of the raised platform start getting filled with young monks wearing deep red or saffron robes. They sit down in rows parallel to the length of the hall. I leave the monastery as monks begin their evening prayers. When I reach my resort, it is already dark. The lights in the rows of huts appears to be the only sign of life in the vast darkness of the jungle. Dinner is served later in the main dining hall.
As I lie down on my bed, I switch off the lights. Complete darkness spreads around me. It is difficult even to see my own raised hand. Surprisingly, there are no chirping crickets or other insects to create a background sound track. I never thought that jungles could be that silent. The total darkness and silence is like an void, which absorbs me in an instant. I fall asleep in just few seconds.