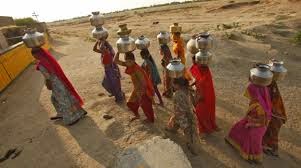 It's an idea whose time has come! Water happens to be the most precious commodity in the state of Rajasthan in India, being one of the most arid parts of the country. Withing boundaries of this state, lies the Great Indian or Thar desert occupying almost 200000 Sq. Km (77000 Sq. Miles) also forming a natural boundary running along the border between India and Pakistan. Four districts of the state; Jaisalmer, Barmer, Bikaner and Jodhpur not only have parts of desert within their boundaries but also have large tracts of semi arid lands on the desert border.

This driest state with 10.4 percent of India's geographical area, 5.5 percent of the population and 18.70 percent of the livestock, has only 1.16 percent of surface water available in the country as a whole. Rainfall is erratic and its distribution pattern all over the state varies to a great extent. The average annual rainfall ranges from 100 mm in Jaisalmer to 800 mm in Jhalawar.

From these figures, readers would be easily able to imagine the kind of scarcity, people of this state face for water. When we talk of drinking water, the problem becomes even worse. Village folk-particularly women- have to walk long distances to get water for their daily requirements as water wells are few and widely spread apart. It is a common sight to see village women with their colourful attire walking with water pitchers on their heads or in hands.

The water that is available from wells in many a times not fit for drinking. Because of this, children suffer with number of water-borne diseases, such as diarrhoea. The water also has a high fluoride content causing joint pains for large number of people, who are forced to take painkillers on regular basis, because of this problem. 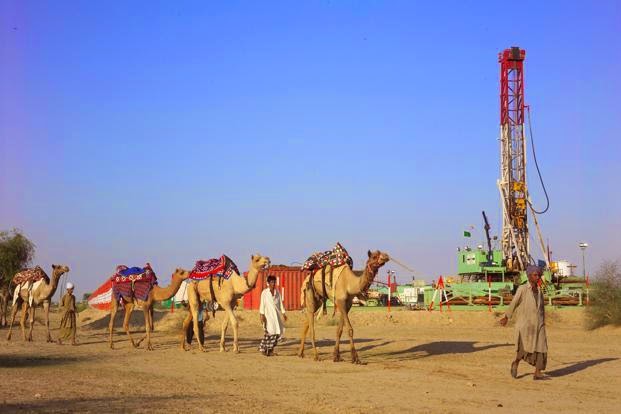 Some parts of Rajasthan state also have oil deposits below the earth's surface. Cairn India, an oil and gas exploration and production company with a market capitalisation of $14 billion, struck oil in Barmer district for the first time in 1999. Today, Cairn India is amongst the top 25 Indian companies and has five oil producing fields in Barmer: Mangala, Bhagyam, Aishwariya, Raageshwari and Saraswati. Together, they produced a total of 181,529 barrels of crude oil every day on an average in 2013-14.

Under corporate social responsibility programme, Cairn India in partnership with Rajasthan government’s Public Health Engineering Department (PHED), Tata Projects and the respective village panchayats (Governments) decided to take up a project to provide potable drinking water at the doorsteps of the local community in two districts of Rajasthan that were infamous due to the scarcity of potable water.

The company has named this project as “Jeevan Amrit (Nector of Life) Project,” under which, kiosks with reverse osmosis (RO) plants have been installed by the company to provide safe drinking water in villages like Bhakharpur, Kawas, Guda, Jogasar, Aakdada and Baytu to benefit 22,000 people. Each kiosk has a RO plant and a water dispenser, which dispenses clean water when a smart card is swiped, effectively converting these kiosks into water “Automatic teller machines or (ATMs).” Many otherwise arid villages, now have 24X7 access to the clean drinking water at the swipe of a card; at 20 litres for Rs.5. The cards come with an initial value of Rs.150 and can be recharged for a similar amount. Plans are afoot to also provide Rs.20 recharges. 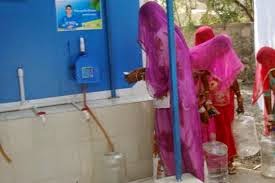 At present, 22 RO plants (17 with the swipe facility) catering to drinking water needs of 22,000 villagers on a daily basis are up and running. This makes the dispensers self-sustaining, with the revenue earned used by the village’s water committee to meet the running expenses of the RO plant, such as salary of the operator, electricity and maintenance. The surplus money is used to undertake developmental work in the village. To maximise the reach of water ATM's, water from the RO plants is also transported to the surrounding hamlets through vehicles at nominal charges of Rs.1 to Rs. 2 extra, as decided by the water committee

The dispensers are gaining in popularity with increasing number of locals buying smart cards. The company is thinking of scaling up the project in the coming years in terms of number of plants and locations. People are happy with the project as they can get clean water for the family at any time in the same villages where once it was difficult to get even water which was not even potable. This is a wonderful initiative from this company without any doubt.