The drum girls of Pune 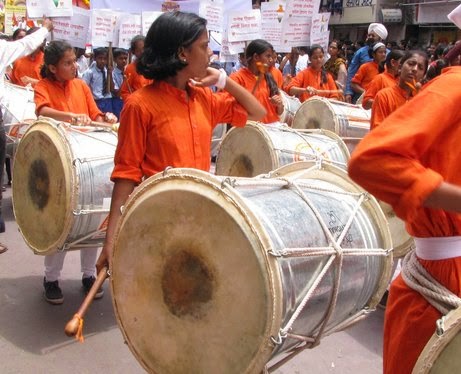 All over the world, towns and cities with long historical traditions, have evolved over the years, their own special cultural events and processions. My home town Pune is no exception to this general finding. In the early years of the twentieth century, one of India's great freedom fighter, Bal Gangadhar Tilak, came up with an idea of starting a cultural festival from out of an old Hindu tradition. Under this tradition, an earthen idol of an elephant headed Hindu God of Ganesha was worshiped for 10 specific days of the Hindu calender in many Hindu homes. On the 10th day, this earthen image of the lord was immersed in the river nearby the town.

Tilak came up with an idea of carrying out this special worshiping publicly, so that for the 10 days, the idol could be revered and worshiped by members of a community or a street block. The idea spread like wild fire all over Maharashtra state of India and Pune was in the forefront of this new movement. During these 10 days, many cultural programmes would be performed, where the idol was installed with political undertones against the British, which was the real aim of Tilak in starting this movement. Soon, the immersion process of the idol got converted into a joyous procession in which the idol was placed on a highly decorated chariot and was paraded through heart of the city before immersion. Troupes playing traditional Maharashtra martial instruments like big drums played with a gong and known as “Dhol” and drums played with sticks known as “Tasha” were brought in along with a simple musical instruments known as “Lezim: which could be played by a troupe of youngsters in a rhythm on the beats of the drums.

Today, after almost a century, the 10 day festival not only is firmly embedded in the cultural traditions of Pune, but has widely spread in Maharashtra and all over India. With this growth of the movement, which can not be considered as organic, many unpleasant aspects have also got in. The processions have become randy and rowdy, with anti social elements creeping in. Sometime in eighties, a new element was introduced in the processions, when new high power audio amplifiers along with walls of speakers became easily available to the groups organizing these public Ganesha worshiping. Thereafter every year, each Ganesha chariot in the immersion procession started having its own high power music system. With this, also came in the cheap and vulgar Bollywood songs, that could be easily played on the music system. Gone were the artistic players of drums and disciplined troupes playing “Lezim” and were replaced by shabby and rowdy troupes of unruly youth, whose idea of dancing was making vulgar and cheap body movements and actions copied from third rate Bollywood flicks. 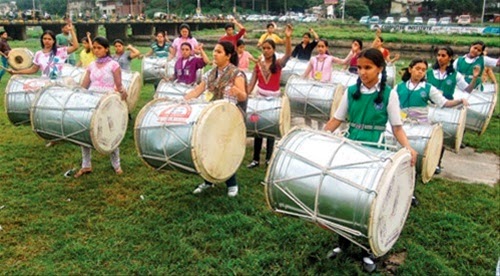 Perhaps fed up and bored with this mega speaker audio blaring out, the procession participants are slowly turning back to the traditional drums and Lezim troupes, but with a welcome change. The drum playing is no longer restricted to boys and youths, an increasing number of enthusiastic young girls have taken a fancy to drum playing. More and more female drum playing groups known as “ Dhol-Tasha” groups are being formed each and every year. Their dignity, talent and dedication have won them a lot of respect over the years. Dhol-tasha players come from diverse educational fields and professions, including physiotherapists, engineers, info-tech professionals and even house wives. They practice their art for a month or two before the procession.

With the drum girls playing in the procession, there is another welcome change. The raunchiness and the rowdiness is slowly disappearing with these girls playing the drums along with their male counterparts. There is no doubt that the entry of girls in this otherwise male-dominated field has added a unique flavour to Ganesha festival in the city. Playing the “Dhol” is no easy job with the “ Dhol” weighing around six to seven kilograms, tied around the waist. The girls however do not seem to mind the physical hardship as they feel that they are doing it as part of their worship of Lord Ganesha and actually feel happy about it. It also needs tremendous stamina as the immersion procession might go on for as long as 24 hours. 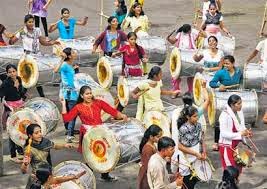 The booming sound of a “Dhole” is something, which one needs to experience. You keep feeling all the time that your ear membranes are going to puncture any moment. The earth shatters and one feels stunned. Just imagine the effect when 10 or 20 “Dhole” playing girls bring out their youthful energy in unison in for a massive boom. I am however happy about one thing, however painful the “Dhols” are, they are thousand times better than the mega watt audio systems playing senseless and meaningless third rate songs from Bollywood flicks.