Any student of Indian history, must have read about the last Hindu king to sit upon throne of Delhi; Prithviraj Chauhan (1149-1192 CE). Except for a short stint by king Hemu during sixteenth century, the throne of Delhi was always in possession of either Mughals and Pashtuns (Pathans) in the later periods. In 1191 King Prthviraj Chauhan had defeated the Afghani general Shahabuddin Muhammad Ghori, in what is known as the First Battle of Tarain and had got him captured. In a strange decision, Prithviraj released Ghori and allowed him to go. Taking full advantage of this unexpected gratitude, Ghauri attacked Prithviraj for a second time the following year. In this battle known as Second Battle of Tarain (1192), tables turned and Chauhan was defeated and captured. Ghori did not the repeat the mistake of his erstwhile captor and promptly executed Prithviraj Chauhan.

The Ghorids were a native Sunni Muslim dynasty that ruled during 897- 1215 CE from Ghor province in the center of Afghanistan and were succeeded by the Ghaznavid Empire. King Ghiyath al-Din Muhammad came to power when Ghorids were at Zenith of power. His loyal brother Mu'izz al-Din Muhammad reconquered the city of Ghazni in 1173, venturing out to India, he captured Multan in 1175 and Lahore in 1186. As mentioned above, he captured Delhi in 1192 defeating and killing Prithviraj Chauhan though there is some confusion about name of Muhammad Ghori. Whether it was Shahabuddin or Mu'izz al-Din. 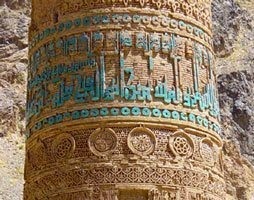 A British Archeologist and Director of the British Institute of Afghan Studies; Dr. Ralph Pinder-Wilson, carried out a major study in the 1970s on Minarets in Afghanistan, which were believed to be erected by Afghans, to commemorate major battlefield victories. For his study, he chose two minarets, one at Jam and other at Ghajni in Afghanistan. After his detailed study, he came out with a conclusion about the Jam minaret, that directly relates to India. The Jam minaret was built to commemorate the victory of Mu'izz ad-Din, Ghiyath ud-Din's brother, over Prithviraj Chauhan, which had allowed for the spreading of Islam in Hindustan. The Arabic inscription on this minaret is unclear - it could read either read as 1193/4 or 1174/5. It could therefore commemorate the victory of the Ghurid capture of Multan or Delhi. However Dr. Ralph Pinder-Wilson's conclusion appears to be more logical as victory over Prithviraj Chauhan was of far greater consequence. 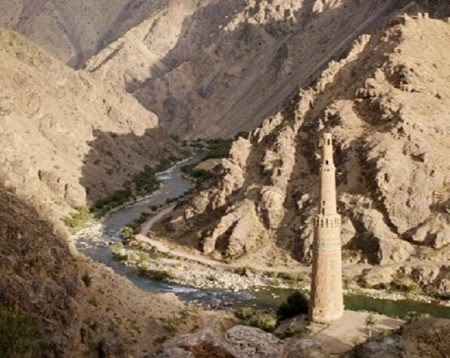 I therefore feel that the Jam minaret is an important historical milestone for India because it marks the advent of firm Muslim rule over the subcontinent that lasted several centuries afterwords. What is surprising is that even after so many centuries, this historical monument still stands tall, in spite of inhospitable climate, frightening political instability and war-torn reality of Afghanistan. 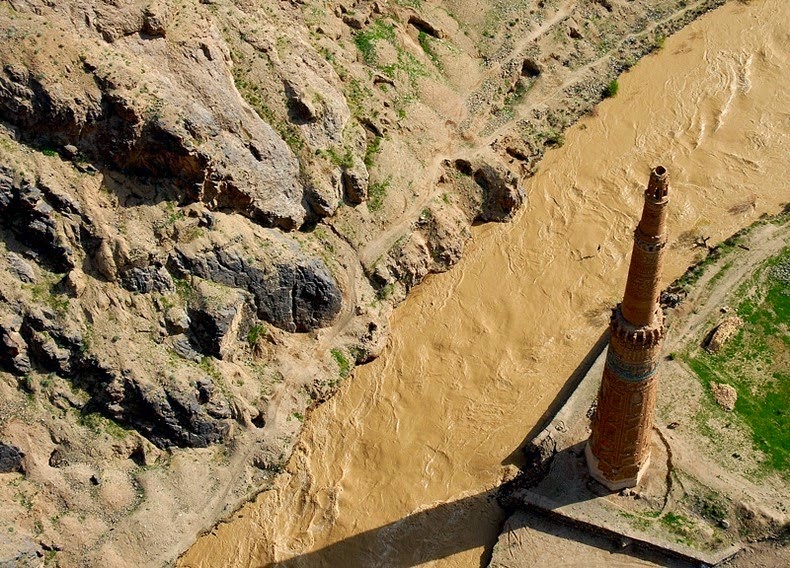 The Jam minaret is located in Afghanistan’s Shahrak district on the banks of Hari river at a place where it meets river Jam around 215 km east of Herat. The minaret consist of four tapering cylindrical shafts stacked on top of each other, rising from an octagonal base and constructed of fired brick bonded with lime mortar. The exterior of the minaret is completely covered with geometric decoration in relief enhanced with a Kufic inscription in turquoise tiles. One can climb up the minaret through a set of double spiral stairs that run from the octagonal base to the circular top, winding around each other like a DNA double-helix. The stairs end in an open chamber, from where you can look out over the confluence of the rivers. A second staircase continues from here up to the lantern gallery. Soring in the sky to the height of 65 meters, it is the second tallest minaret in world after Delhi's famous Kutub Minar, again built during Ghorid rule over Delhi.

Wikipedia says that the Minaret’s existence was little known outside of Afghanistan until Sir Thomas Holdich reported it in 1886 while working for the Afghan Boundary Commission. It came to world attention, in 1957 through the work of the French archaeologists André Maricq and Gaston Wiet. Later, Werner Herberg conducted limited surveys around the site in the 1970s and Ralph Pinder-Wilson completed his major study of the site in the 1970s before the Soviet invasion of 1979 once again cut off outside access. The Jam minaret became Afghanistan's first UNESCO World Heritage site in 2002. 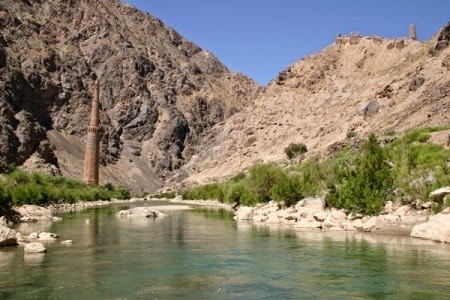 The Jam minaret belongs to a group of around 60 minarets and towers built between the 11th and the 13th centuries in Central Asia, Iran and Afghanistan. The minaret was once connected to a great mosque along the riverbank, and evidence of the building and a massive courtyard have also been found near the site. The archaeological landscape around Jam also includes the ruins of a 'palace', fortifications, a pottery kiln and a Jewish cemetery, and has been suggested to be the remains of the lost city of Turquoise Mountain. 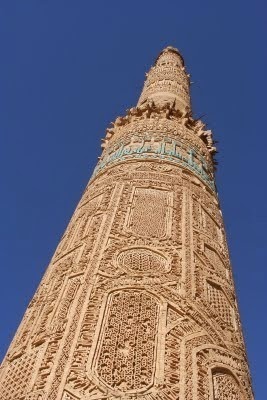 In spite of the fame, things are not going well for the Jam minaret. Afghan officials warn that it is actually in danger of collapse. They say that 20-30% of the decorative brick work had fallen off and the minaret is actually leaning like tower of Pisa. The biggest threat to the Jam minaret is being caused by its position in a river valley among high mountains. Erosion of the nearby river bank and illegal excavations are considered the biggest threats to its future. Flooding of the nearby Hari-Rud river has damaged the base of the minaret.

Afghans have built a new supporting wall carried out other stabilisation,, but it is not enough to secure the site. For India, Jam minaret remains an important historical landmark, though very few Indians must have visited it. It is hoped that Afghan government finds some way to preserve the monument and would not allow it to go the way of bamiyan Buddhas, destroyed by Taliban.