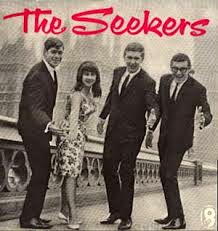 The Seekers, an Australian folk-influenced pop quartet, was originally formed in Melbourne in 1962. They were the first Australian pop music group to achieve major chart and sales success in the United Kingdom and the United States and were very popular during the 1960s.

I'll Never Find Another You was “The Seekers'” first UK-released single that became UK No. 1 single.. It was the best selling single of 1965 in the UK and was also popular in the US, reaching peaks of No. 4 pop and No. 2 easy listening in Billboard charts.


If you can not see the embedded video on your android devices, here is the link. http://youtu.be/4Ga9Bs4fzSY You can also copy and paste the link in your You Tube App. If that also does not work, search You tube, I'll Never Find Another You, The Seekers.

Email ThisBlogThis!Share to TwitterShare to FacebookShare to Pinterest
Labels: I'll Never Find Another You, The Seekers. long forgotten musical tracks