A month for the Ghosts The traditional Chinese calender is lunisolar. Like the traditional Hindu calender followed in India, an ordinary Chinese year year has 12 months and a leap year, that comes after every three years, has 13 months. Out of the 12 months in an year, the 7th Lunar month is considered something special. Chinese believe that the gate of the Chinese Hell, opens on the first day of this Lunar month at early midnight every year. The suffering spirits from the Hell, are able to return to their homes to see their descendants and enjoy grand feasts. But they have only one month as a vacation and have to return to the Hell on the last day of this month. Since the suffering spirits from hell return to earth in this, 7th lunar month. The month is commonly called as the Ghost Month.

I have never been to China. But I have stayed long enough in Singapore to observe the way in which Chinese people living in that country, celebrate this month. Chinese Singaporeans usually observe a large-scale tradition of paying respects to the dead. One can see tents sets up all over Singapore, where people congregate to burn incense sticks and present their offerings in the form of prayer, fruit such as Mandarin oranges, food such as roasted suckling pig, bowls of rice and occasionally a local Chinese cake made especially for the occasion. 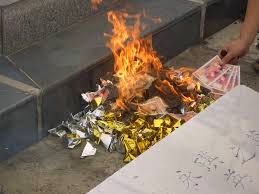 However, Singaporeans probably believe that just offering food is not enough to comfort the hungry suffering spirits and they should have some entertainment. So it is time for some Chinese Operas popularly known as “Wayyang” and musical shows known as “Getai.” Both are really boisterous live performances not only depicting tales of the divine gods and goddesses, but also bawdy stand-up comedies with a local twang, song and dance numbers in the various Chinese dialects and even sensually acrobatic pole dancing by dancers. Everyone is invited to to watch the show but you can not sit in the front row, which is reserved for the hungry ghosts. 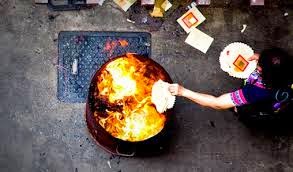 Not everyone has time to go to these tents to pay respects to hungry ghosts. Singapore authorities set up special joss paper bins for people to burn their paper money and pictures of various luxuries of modern life like cars, televisions, houses, clothes and even food. It is believed that it would get translated into great fortune in the afterlife. Small altars can also be seen outside many homes, both on private property and in public housing areas.

I am reminded of these Singapore rituals, because Indians also follow similar kind of tradition in the second fortnight of the Hindu month of “Bhadrapada,” which they dedicate to their forefathers. People generally arrange special feasts and prepare dishes, which were favourites of their departed parents or grand parents and invite a Brahmin for the feast. They believe that when the Brahmin eats the food, it reaches their forefathers. During the so called religious rituals, known as “Shraddha,” which are carried out before this feast, it is a common practice to prepare balls of rice as symbolic representations of departed ancestors. 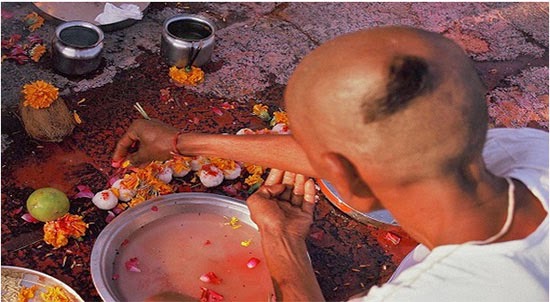 I would not like to comment on these beliefs, because it is really in the personal domain of an individual. No amount of arguing, even when based on perfect logic, would usually make any difference to such moribund thinking of an individual deeply stuck in traditions. 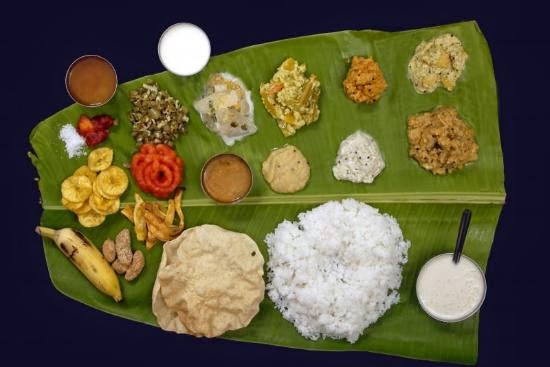 Indians also think this fortnight to be the most inauspicious period of the year. No new projects are ever taken up and it is believed that anything started during this fortnight is doomed to be a non starter or failure. People would not even buy new gadgets, cars. They will book these things but ask the delivery after the fortnight is over.

Next month, we would be having general elections to elect the state Government, which shall rule our state for next five years. The election process has been already initiated by the election commission 10 days before. Surprisingly, no party would declare their candidates in this fortnight. Similarly no hopeful candidate has dared to file his nomination in this period because it is believed to be inauspicious. I find it just amazing to see how tradition bound the Indians really are.