The tunnel of hope

I wrote a blogpost in July 2012, about the Rohtang tunnel being excavated on a national highway of great importance, the Leh-Manali Highway. I had explained in that blogpost the historical background and the strategic necessity for which this highway was planned soon after India's independence and work had began in 1950 itself. This highway was opened to traffic in 1965, just after India-Pakistan war for military transportation and later for everyone.

Manali-Leh route travelling over 485 KM, is militarily safe because it is far away from international borders. Because of this road, the life and death importance of Kargil road to Ladakh has been reduced to quite an extent. Even then, there remains one great obstacle on this highway, which makes this road unusable during winter months. About 51 KM from Manali, this route passes through Rohtang pass, which is at an height of 13000 feet. Because of very heavy snow fall in this valley, the pass remains closed for at least 6 months a year. With the pass remaining closed, road communications to Lahaul-Spiti araes, which are just north of this pass and also to Ladakh, gets totally blocked. Since both, Kargil and Ladakh route close in winter, Ladakh's road connection with rest of the country is totally cut off for 6 months every year. Even in summer, the weather in Rohtang pass is unpredictable with cold biting winds and sub zero temperatures. 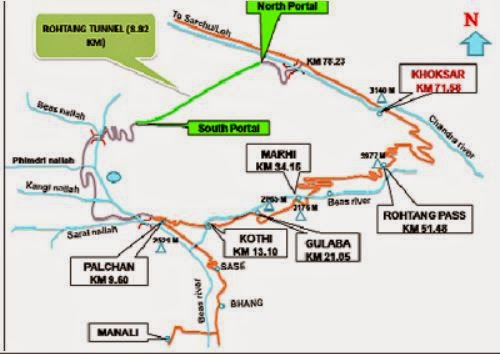 To overcome this natural obstacle, the Indian Government flagged green to a project of digging an all weather tunnel under Rohtang pass. In 1984, Geological Survey of India carried out the preliminary studies and in 2000 the work on a road leading to Rohtang pass, costing 180 Crores Rupees(Rs. 1.8 Billion) was started at the hands of then Prime minister Atal Bihari Bajpai . An Australian company , SMEC International, was appointed as consultants for this work. After the report of this committee was received, in September of 2009, the work of building a tunnel under Rohtang pass was awarded to an Indian-Austrian company, Strabag-Afcons, and the work commenced on 28 June 2010. Horse shoe shaped Rohtang tunnel is 8.8 KM long and would have a width of 11.25 meters. Instead of using the old Rohtang-Leh road, a new road passing thorugh Shin Kun pass in Zanskar valley and Padm town in Zanskar, is also being built at the cost of 286 Crores Rupees (Rs.2.86 Billions). All these works were expected to be completed by 2015.

The project met its first unexpected delay in form of a heavy ingress of water through the rock face inside the tunnel in July 2012 and presented a new challenge for Border Roads Organisation. Giant boomers and heavy construction equipment had to be brought in to control and deviate the steady flow of water that was not supposed to have been there in the first place. The engineers and workers had to work wearing masks, fluorescent jackets and knee-high rubber boots had to wade through slush and water, under the glare of floodlights. 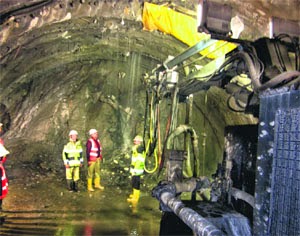 The water ingress,spread over a small area and giving the impression of miniature spring, at the rate of 35 litres per second, was flowing into the tunnel at the last point of excavation at the south portal, meaning that about 30.24 lakh litres of water, enough to fill up a small lake, was entering the tunnel every day. According to engineers the inflow was unexpected as the rock survey did not reveal any such water presence at this point. In desperation, BRO resorted to chemical grouting using polyurethane procured from Switzerland, rock bolting and pipe umbrella roofing, which involved boring steel rods and mesh, to strengthen and stabilise the overhead rock. The Swiss chemical was expensive and about 4.5 tonnes, costing about Rs 35 lakh, was used. Due to the ingress of water, the project was running roughly 300m behind schedule in July 2012.

After 2012 incident, as per my knowledge, no further delay has been reported by BRO. But local press reports say that the project would now be completed only in 2017. This delay has made people in Lahaul-Spiti district of Himachal Pradesh state of India, restless as, this tunnel, which they call as tunnel of hope is really something on which their entire future depends.

Lahaul-Spiti district,spread over 13833 square km but with a population of 31,528, has the lowest population density of 2 per sq km in country. Their only contact with rest of the country is through Kullu, that too after crossing the 13050-foot-high Rohtang pass. So during winter months, the tribal district is cut off from the rest of the world in late October or November following heavy snowfall and opens up only in April or May after snow is cleared from Manali-Rohtang-Keylong road. People resent this cut off because during winter months, even the helicopter service faces problems and it becomes impossible to get specialized medical treatment. Completion of tunnel was expected to propel tourism business in Lahaul-Spiti but now people would have to wait longer to witness the tourism boom and fulfillment of their dreams

The Rohtang tunnel has already become a dream of the lifetime and a  lifeline for Lahaul residents, even before its completion. So high are the hopes! To meet the challenges of the mammoth task, the BRO has brought in an array of hi-tech and automated equipment, much of which is imported and some of which is being used for the first time in India. But if unexpected problems arise like ingress ofd water in 2012, there is very little BRO can do. Residents of Lahaul-Spiti district may have to wait for couple of more winters before their life line opens for them.


p.s. As reported in Border Roads Organization, Annual Chief Engineers Conference, 2014, out of total length of 8.8 Kms, 4.4 Kms length of tunnel has been completed by September 2014. The completion date has now been pushed forward to 2017.