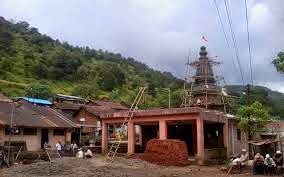 Malin is a small village of about 40 to 50 families situated in the Ambegaon Taluk in the Pune district of Indian state of Maharashtra. The village, surrounded by a very picturesque countryside, is located on a hill slope of the western Ghat mountains, about 500 meters away from the Manchar-Asane Road and about 120 Km from the city of Pune. It is amongst a group of 60 to 65 similar villages located on hill slopes in this area.

The dawn broke over the village, on July 30th, 2014, with an overladen dark gray sky with sheets of rain falling all over the area. The region is known to receive heavy rainfall, but since last four days, the rains were particularly incessant and heavy. A Maharashtra State Road Transport Corporation (MSRTC) bus leaves the village at 7.30 am everyday after taking an overnight halt in the village. But the bus stop is located at a considerable distance from the village on the main road. Six villagers had woken up early on that day to see off their children, who were taking the bus. They had the left the village. Except for them rest of the villagers and guests were very much in the village. 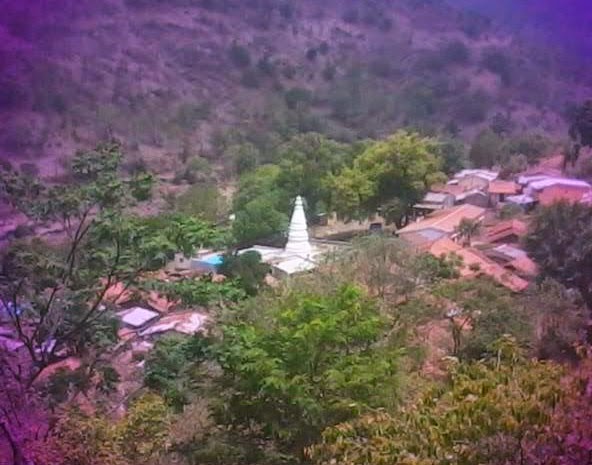 24 year old Vitthal Titkare was one such guest, who had come to the village to spend a holiday with his wife at her maternal home in the village. Most of the houses in the village except for a temple with a 35 feet high dome, a community centre, school and a few houses withRCC construction, were built with bricks. Also like most of villages built on hill slopes, the doors to the houses faced the slope and not the cliff. Around 7'o clock in the morning, Vitthal's brother-in-law, who was outside the house suddenly started shouting and asked everyone in the house to vacate and run outside. But before Vitthal and others could gather what was happening and move, their world sharply and abruptly came to an end. A massive landslide with large boulders and a flood of mud hit the village next instant, completely submerging and burying everyone and everything in the village under it. Within a few seconds, nothing but an eerie silence prevailed over the entire village. 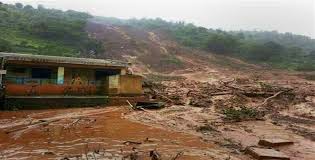 Around 7.30 AM, another MSRTC bus, travelling on a daily trip from Ahupe to Manchar, approached the spot, where the village stood few minutes before. The driver usually would stop here and pick up few villagers going to Ambegaon market. That day, he had a shock of his life, as no trace of the village was seen at all. All that he could see was a vast slide filled with sticky reddish mud and boulders. He also found that there was no signal on his mobile phone. Absolutely stunned and shocked, he drove on and when he reached a spot further up, where some people were standing, he stopped and informed them about what has happened. 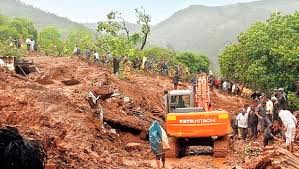 Within few hours Government machinery and National Disaster Rapid force (NDRF) men reached the spot with earth moving machinery. It was no easy task to reach the village because of narrow roads and incessant rains. When they reached the spot all they saw was a nicely plastered 35-foot mound. Only the temple dome was visible. Almost all the houses were destroyed. Only a couple of them are intact still. It is feared that the entire population of the village has got buried under the mud slide. 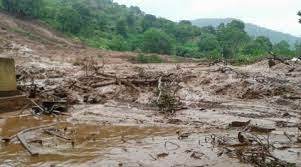 Vitthal was lucky. He was caught under a broken door. The space thus created, allowed him to breathe. Later, around 1 PM he heard the sound of the earth-movers clearing the debris. It was around 1.30pm that he was taken out by rescuers. Not everyone was so lucky. Vitthal's wife and mother-in law lost their lives, so also scores of others. As reported on 31st July 2014 evening, 36 people were confirmed dead and some 150 still feared trapped below the mud. 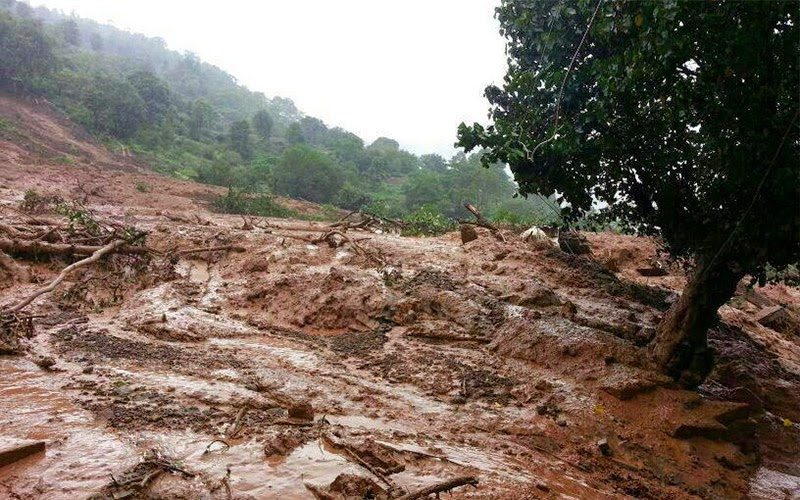 Why did it happen? Geological Survey of India experts fear that it could happen again. The root cause of the landslide is believed to be the levelling of the land on the hill for cultivation. According to one expert, unlike Himalayas, which are prone to landslides because they are rocky and there is nothing to hold the soil, western Ghat mountains hill slopes are well bounded by the thick forest cover. However, indiscriminate cutting of trees is creating conditions here that can lead to such landslides. It's a deadly warning!