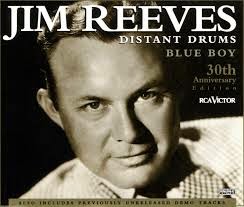 Jim Reeves, the great singer of 1960's has featured here twice with two of his popular numbers, 'Bimbo' and He'll have to go. This week we have another very popular number from him, “Distant Drums." This song provided Jim Reeves, who was a US singer with his only UK number one hit – albeit posthumously – in the United Kingdom in 1966, some two years after his death in a plane crash on 31 July 1964.The song remained in the UK Singles Chart for 45 weeks. The single also topped the US country chart for four weeks, becoming his most successful posthumous single. Distant Drums perhaps gained in popularity because of the on-going hostilities in the Vietnam War and an increased public awareness of the difficult conditions faced by U.S. armed personnel fighting in that conflict.

If you can not see the embedded video on your android devices, here is the link. http://youtu.be/9AqESKOaeGk You can also copy and paste the link in your You Tube App. If that also does not work, search You tube, Distant drums, Jim Reeves