Can Saraswati river be revived? 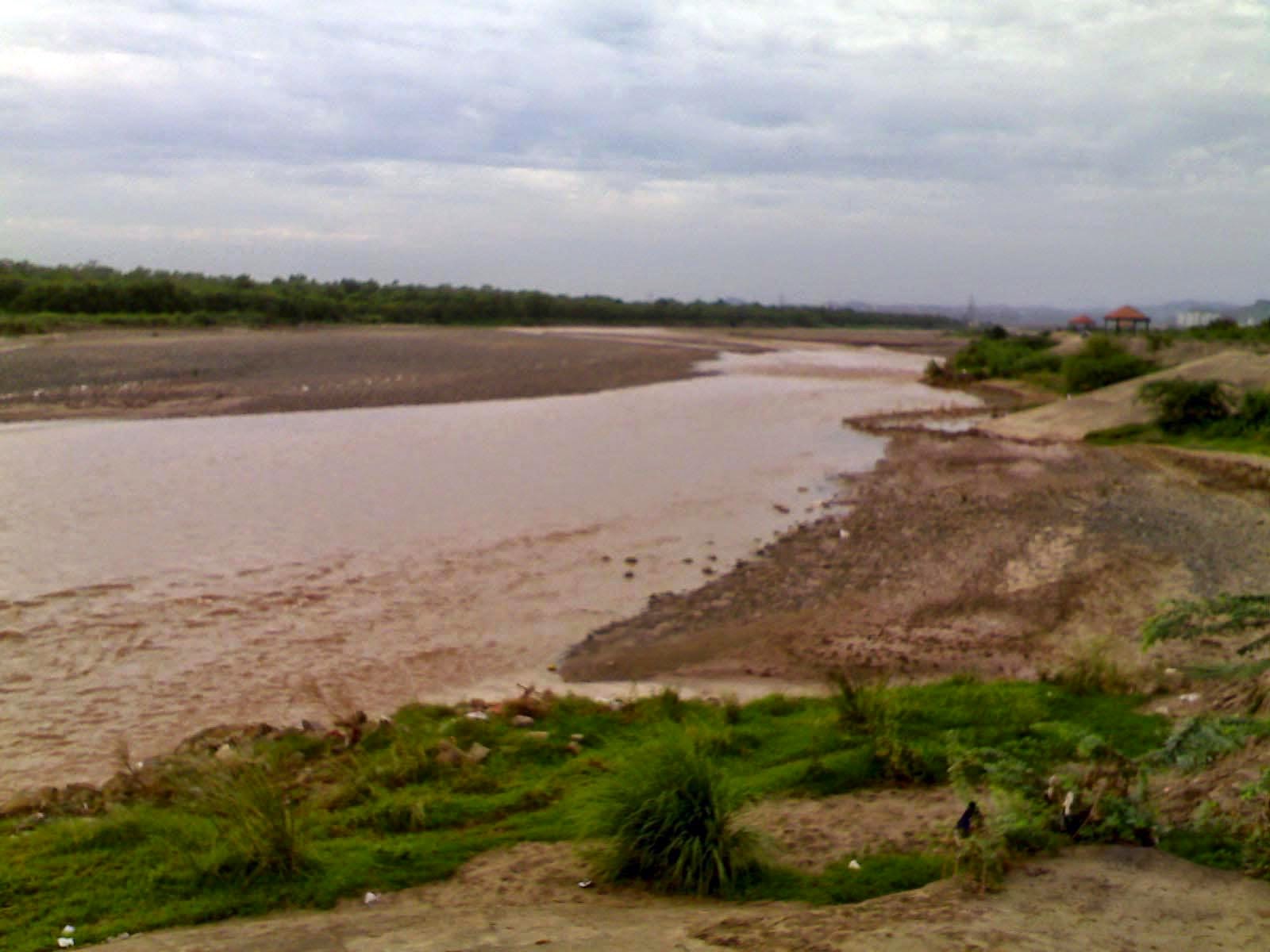 If there ever was a single entity that could be called as an epitome or paradigm of the ancient Vedic culture civilization of pre-historic India, it was surely the mythical river Saraswati. It is now believed that the entire Vedic culture did blossom and bloom along the banks of this mythical and grandest of all rivers in India. Since the river was never seen in the known historical period of India, a legend grew which said that the river was invisible. Lay people did believe in this legend but for more scientifically minded souls, some kind of proof was necessary to accept it's existence.

The story of the discovery of this once mighty but later thought to be invisible river is quite fascinating. To begin, let us first move to the vast marshy land known as Rann, sandwiched between India's Kutch region and Pakistan's Sind province. Up to 1918, a river known as Kori river flowed from Sind into the Rann, eventually emptying itself in Arabian sea through what is known as Kori creek. From the times of Alexander the great (325 BC) and Ptolemy (150 AD) this Kori river was always thought to be a subsidiary of the mighty Indus and Kori creek was called as eastern mouth of the Indus. In 1819, a major earth quake struck the region. As a result of earthquake, entire Sindh shoreline north of Rann rose up like a bund known as “Allah's Bund” or God's Bund. This God's bund effectively closed the eastern mouth of the Indus or Kori river forever. The lost Kori river is of special relevance to our story as would be clear later. In 1870, a geologist Alex Rogers discovered Alluvium or sand, mud, deposits formed by flowing water in Gulf of Khambat, suggesting a past presence of a major river system in the area. In 1886, a British officer, Oldham, reported finding a vast dry bed of a river, through which a much smaller seasonal monsoon fed river, known as Ghaggar now flowed. Ghaggar river, originates near Ropar in Punjab and dissipates itself in the sands of Rajasthan deserts. 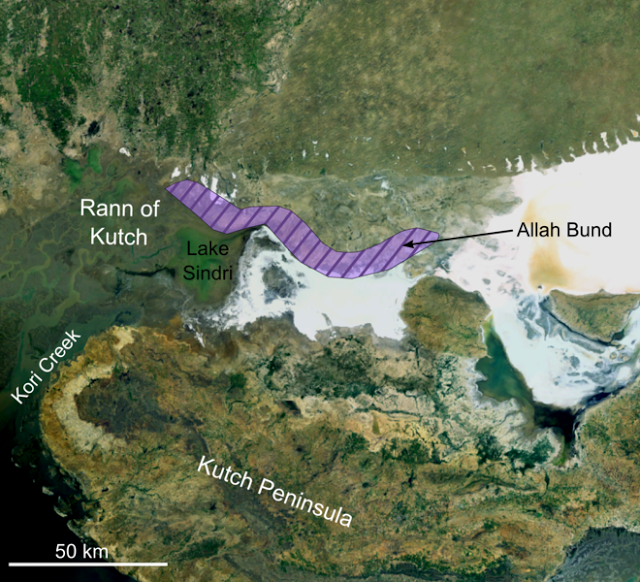 In 1921, finding of Mohenjodaro city, on the bank of Indus river, led to the discovery of the most ancient civilization of Indian sub continent, known as the Indus civilization, that existed during 5000 to 2500 BCE. European historians came up with many fancy theories after this discovery, about Aryan invasion of India that was supposed to have destroyed the newly found Indus civilization and that is what was generally believed till even three or four decades ago.

Extensive excavations carried out by the Archaeological survey of India along the banks of the dry bed of Ghaggar river, has brought to light, hundreds of places, like Kalibangan, Rakhigarhi and Ganweriwala, where chalcolithic civilizations thrived once, during 3500 to 2500 BCE. Discovery of the port city of Dholavira further supported the historical fact that the now marshland of Rann, was once a navigable channel of water, mainly fed by Sarswati waters. 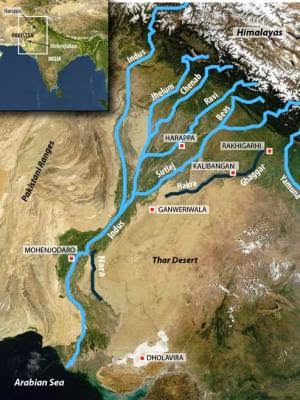 Mr. R.N. Athavale, is a former Scientist with National Geophysical Research Institute, Hyderabad, and Emeritus Scientist, CSIR, India. He was involved in the research work concerning Saraswati basin. He says that by 2008, most of the scientists believed that the ancient Saraswati river was not mythical but originated in Himachal Pradesh, entered Haryana near Kalka, moved through Punjab and Haryana into Rajasthan, meandered and wound further downstream, till it debouched in the Gulf of Katch. The river is currently known as Ghaggar River in its upper reaches and Hakra and Nara in the lower reaches. The Ghaggar today is an ephemeral stream fed only by monsoon waters. In the past, several major and minor tributaries joined the Sarasvati over its course. The relevance of Kori river would now be clear. Kori probably was not the mouth of Indus but Saraswati. (Sankaran, A.V., 1999; Roy and Jakhar, 2001)

Another report on a study, was published on 28th May 2012 in the Proceedings of the National Academy of Sciences and lead authored by Liviu Giosan, a geologist with Woods Hole Oceanographic Institution (WHOI), that claimed to have found the answer to the Saraswati riddle. The study was done from 2003 to 2008 from the Arabian Sea coast to the fertile valleys of Punjab and the northern Thar Desert in Pakistan. Over this period, Liviu Giosan's team of 15 international experts, which Included Prof Ronojoy Adhikari of the Institute of Mathematical Sciences, Chennai, studied satellite photos and topographic data collected by the Shuttle Radar Topography Mission. From this data the team created digital maps of landforms in the basins of Indus and other rivers. This analytical work was then confirmed with help of field work in the area, consisting of drilling, taking core samples and digging deep trenches to study cross-sectional views. The report says that archeological evidence suggests very intensive human settlements during Harappan times in the basin of Ghaggar-Hakra river, which is believed to be the long lost Sarswati of the Vedas. The geological evidence like presence of sediments, topography discovered in this study shows that these rivers (Ghaggar-Hakra)were indeed sizable and highly active in this region, most likely due to strong monsoons, during Harappan period. 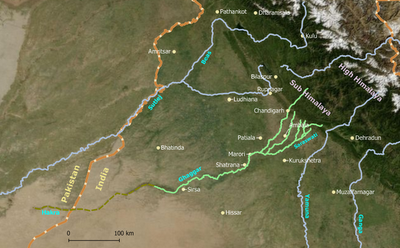 We now come to the next question. How did the Saraswati river disappear. Everyone agrees that it disappeared sometime between 5000 and 3000 BCE. However there are tow schools of thought for the reasons behind this disappearance. Liviu Giosan report assigns gradually weakening monsoon rains as the main reason for drying up of Sarswati, whereas CSIR scientists believe that The Sarasvati river system was always a separate entity and was never part of the Indus basin. It dried up a few thousand years back, due to tectonic movements, tributary diversions and climate changes, when it was no longer fed by the Himalayan snow.

Whatever may be the reasons, the fact remains that the dry courses of the main river and its tributaries are at present covered with sand, loam and silt, deposited by wind over last few thousand years and they could be discerned only after the advent of satellite remote sensing techniques.

Readers might have felt puzzled for my bringing up this subject now, but there is reason for that. India's federal minister for water resources and river development minister has just announced that Government plans to take up the issue very seriously to trace the route of the river.

I do not know, what purpose would be served by taking up this study as everyone in the scientific community knows that the Saraswati river is not a myth. Satellite images of northwestern India shows presence of underground channels of water below the river bed and the water has been found to be at least 3500 years old by scientists. It is also known that the river passed through plains of Punjab, Haryana, Rajasthan, Gujarat and finally emptied in the Arabian sea through the great Rann.

Some people want the river to be revived. It could be a game changer as river once flowed through zones that are arid and desert like today. It can certainly bring riches and wealth to the arid region no doubt. To do this, we may have to divert the waters of Satlaj and Yamuna rivers in the bed of Ghaggar. Though technically it is feasible, there are other difficulties that are of political nature. Satlaj ultimately meets Indus river, which now is in Pakistan. Satlaj water is shared by the two countries as per an international agreement. Pakistan is unlikely to allow diversion of Satlaj water to India. This means that we can only divert some of the Yamuna water to Ghaggar, which in any case may not bring back the former glory to Sarswati.

Another major difficulty is that the dry bed of Saraswati in the lower reaches almost entirely falls within political boundaries of Pakistan. A question naturally arises as to why should we divert eastwards flowing Yamuna waters to Sarswati bed, if ultimately it will go to Pakistan. The idea of revival therefore is a non starter and would work to some extent if Pakistan agrees to diversion of Satlaj waters because finally it would be going back to that country only. Without Pakistan's cooperation, any talk of revival of Saraswati has no meaning at all.

There is another possibility though, as suggested by Mr. R.N. Athavale. The states of Punjab and Haryana and to some extent similarly affected irrigated parts of Rajasthan, are today facing the problem of disposal of the water drained out from the thousands of hectares of waterlogged, salinized and erstwhile fertile areas. The problem is considered as the most difficult aspect of reclamation through man made sub surface drainage. It is suggested that the presently dry and pristine sub surface beds of the Sarasvati and its tributaries in the desert area, can be used to dispose off the water collected through a network of sub surface drains. This appears to me as the most practical solution as excess waters would be carried to the arid region because of the natural slope of the river course. Since this water flow is not likely to be very large, it need not flow to Pakistan at all and could be used for agriculture in Rajasthan alone.

I feel that any other plan for revival of Sarswati would prove to be a non starter.