To Dhoti or not 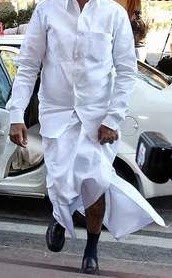 I have been a member of a private club situated in my home town Pune. This club is quite old and was started by some British army officers posted in the cantonment, in the vicinity of the old city. Slowly, Indians were admitted to the club and after 1947, when the British army officers left India, our club became a club totally owned by Indians. Our club still maintains some old traditions. It does not allow members wearing shorts, Tee shirts or footwear like sandals or flip flops, to enter the dining room. Some members resent this and feel that more casual attire should be allowed inside. In spite of this resentment, majority of the members feel that the present dress code is a good thing and is continued.

I also happen to be a member of an another club in Pune, which is sports devoted. The major activities that happen on club premises are mostly related to indoor and outdoor sports, The club also has a dining area. There are absolutely no dress restrictions here. You can walk in the dining area after a game of tennis, still dressed in a Tee and shorts and no one seems to object.

The point I am trying to make is that each and every organization has its rules, conventions and traditions. It would be totally wrong to say that an 'A' club is right or 'B' club is wrong because one allows something and the other does not. Recently in the assembly of Tamil Nadu state of India, an attempt was made to classify some do's as wrongs and some don'ts as rights for a club in Chennai, by Councillors, who are  gross outsiders and who have nothing to do with that club. It naturallyr become a matter of great debate. This happened because of a little incident that happened a few days ago and the controversy it seems to have generated. 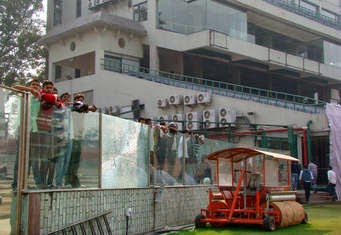 Tamil Nadu Cricket Association Club or TNCA Club, Chennai was founded in the year 2000 and is run by the members only for the members. As is the practice of most of the clubs in India, TNCA also allows its members to arrange small get-togethers or other functions on its premises, when outsiders are allowed to enter club premises. A few days back, a book release function was arranged at TNCA club, when Madras high court judge Justice D Hariparanthaman, and two senior advocates, R Gandhi and G R Swaminathan, were invited to attend this function. However, when these three eminent persons reached the TNCA club, they were denied entry in the club , simply because all three of them wear waring Dhotis.

TNCA club dress regulation stipulates: "Persons will not be admitted into the club premises if they are not decently dressed. Persons attired in coloured bermudas, colour/multi-colour lungies, cut banians/vests and/or wearing hawai chappals will onto be permitted into the TNCA club." The club staff denied permission to these three luminaries saying that wearing dhoti was "violation of club's dress code." It seems than other clubs in Chennai like the Boat Club, Madras Gymkhana Club also follow similar practices.

It must be however remembered that Dhoti is not an attire that can be classified along with bermudas and lungies. It is the traditional Tamil wear, worn on formal as well as religious occasions like marriages or even visits to temples. India's former finance minister used to wear it even in the parliament.

It was no wonder therefore that this incident caused a furor in Tamil Nadu and many felt that this was returning to the days of British colonialism. Tamil Nadu's chief minister dubbed the act as "sartorial despotism." Condemning the incident, she said that the club's act was a mockery of Tamil culture and tradition. These practices were in vogue during the colonial rulers. It is regrettable that these acts continue despite sending the British off 67 years ago.

Tamil Nadu Government wants to enact new legislation now to put an end to the practice of denying entry to dhoti-clad people into clubs in the state and take action against the club through the Registrar of Societies by issuing a show cause notice seeking a reply from the club. The reason for the show cause notice is that the club bye-laws submitted by the TNCA to the Registrar of Societies have no mention of the dhoti as a banned attire.

I would consider these likely steps to be undertaken by the Tamil Nadu Government as carrying things too far. The Government may be right in asking the club about denial of the entry for a person wearing a Dhoti, when it's bye-laws do not specify this attire as a banned one. But if tomorrow the clubs amend their bye-laws and insert the words Dhoti also, what could it possibly do? After all, these clubs are private clubs run by the members and framing rules and bye-laws is their own sweet prerogative.

I have a few small questions for the Madras high court judge and the two senior advocates. They know that legal courts in India, have rules about the attire and the ware the judges and advocates are supposed to wear. Would these distinguished gentlemen, attend the courts in tee shirts and jeans? Surely not! Similarly if some private club, like most of the clubs in India, has a dress code? Why did they went to a club wearing a Dhoti? Did they not know that they would not be allowed? I have nothing against Dhoti as a formal attire. But I do not understand this insistence on wearing it in a club.