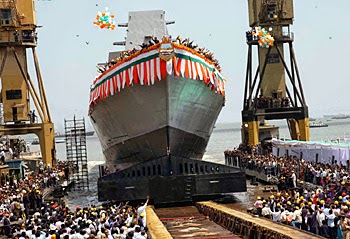 This week turned out to be a double boost for Indian Navy as two brand new, state of the art naval ships were handed over to it by the builders.
The first ship out of these two was the 163 meter long and 7500 tonne displacement, largest-ever destroyer, INS Kolkata, which is also India’s first domestically built guided missile destroyer to feature a Western-style air search radar and stealth technology. It was built at Mazgaon Docks Limited from Mumbai. It is believed that INS Kolkata has an all-round capability against enemy submarines, surface warships, anti-ship missiles and fighter aircraft. It incorporates modern weapons and sensors having advanced information warfare suite, an auxiliary control system with sophisticated power distribution architecture and modular crew quarters. 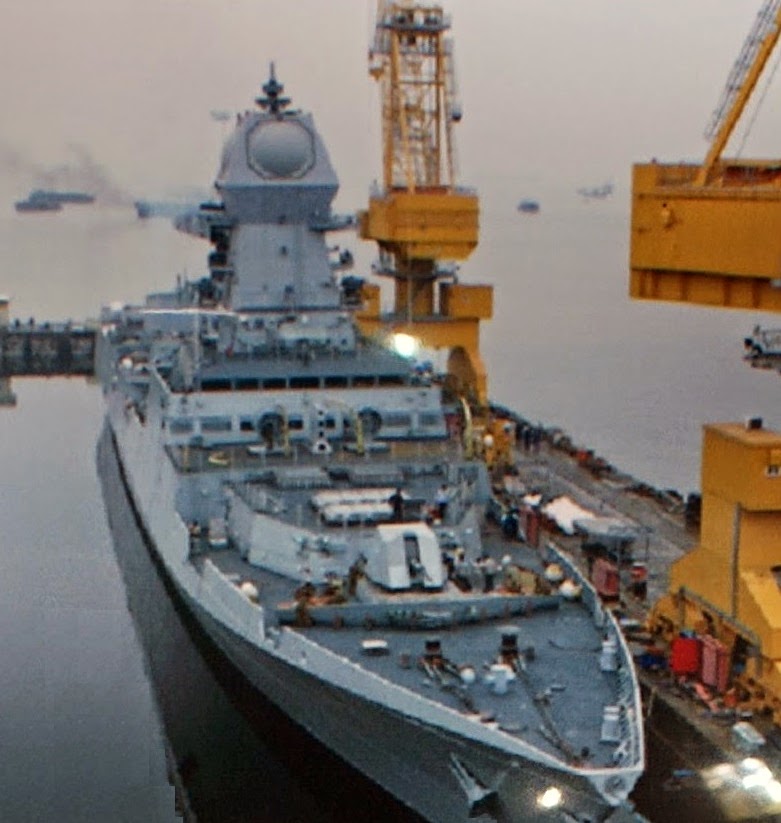 It will have a complement of 16 BrahMos missiles in vertical launch configuration along with Long-Range Surface-to-Air Missiles that can shoot down incoming anti-ship missiles (ASMs) at ranges out to 70 kilometres, protecting the ship far more effectively. The BrahMos supersonic cruise missiles on board allow pinpoint strikes on enemy ships and land targets as far away as 295 kilometres. INS Kolkata has besides anti-air, anti-ship and anti-surface capabilities, potent anti-submarine platforms. New generation HUMSA hull-mounted sonar, supplemented with the Nagan active towed array sonar, both developed by the DRDO and built by Bharat Electronics Ltd (BEL) in India, fully capable of picking up enemy submarines, especially in Indian waters with their distinctive temperature gradient. The destroyer also can launch heavy torpedoes up to 100 kilometres, or with an Indigenous Rocket Launcher (IRL) built by Larsen & Toubro. 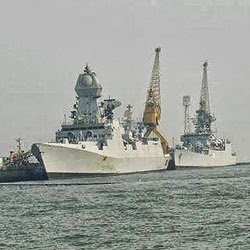 INS Kolkata will be manned by 325 crew persons and has an operating range of 15,000 kilometers, extending its range across the Indian Ocean to the Atlantic and the Pacific. Its four Ukrainian gas turbine engines propel the vessel at 60 kilometres per hour. Two helicopters on board further extend its reach. Kolkata has been long in the making. Construction began in 2003 and the vessel was launched in 2006. Thereafter, it has spent eight years in the water while it was fitted with the cutting edge weapons systems. However, the ship has been built at almost one third the cost, when compared to a ship recently acquired by Britain's Royal Navy. INS Kolkata has costed to the exchequer Rs 39 Billion against Rs 110 Billion paid by UK’s Royal Navy for its new Type-45 Daring-class destroyers. 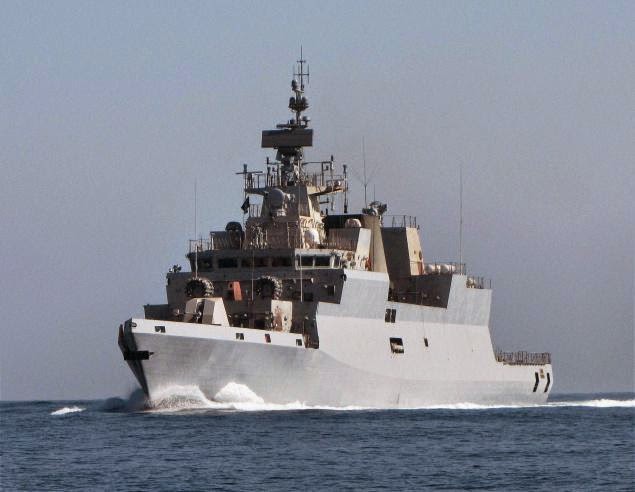 The second ship to join the Naval fleet this week is INS Kamorta, an anti-submarine corvette built by Kolkata based Garden Reach Shipbuilders & Engineers Ltd. What is significant with this ship is that it has been built with almost 90 per cent of indigenous content. The warship uses indigenously developed special grade high-tensile (DMR249A) steel produced by Steel Authority of India, removing dependence of Indian ship builders on steel imported from Russia.

The bulk of sensors and weapon systems fitted on the hulk of the ship also have been indigenously manufactured by various Indian Industries. Experts believe that the corvette has a significant edge over existing platforms of other warships as it has a “rail-less” helicopter traversing system. It also has foldable hangar door. 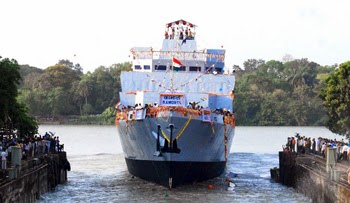 These two new addition with their modern weapons and sensors having advanced information warfare suite, an auxiliary control system with sophisticated power distribution architecture and modular crew quarters are bound to be good additions for the Navy and should make the seas around India even safer.