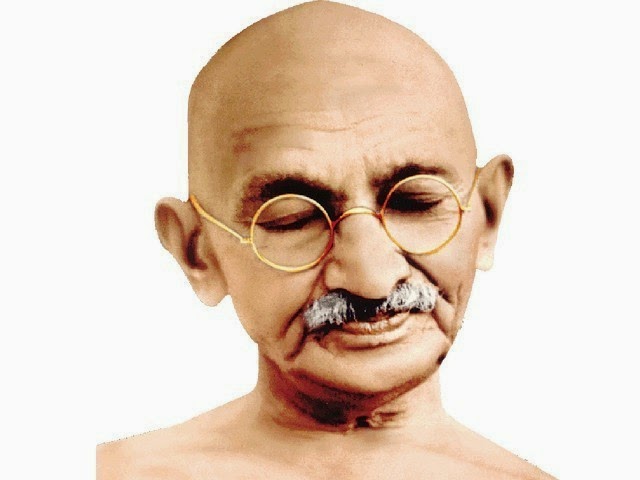 India's greatest son of our times, Mahatma Gandhi was still alive, when I was a school boy, though I never had an opportunity to see him even from a distance. Those were the formative years of the independent India and he was still a Congress party leader. He had not become father of the nation as yet and school text books did not have anything much about him. I read about the life and times of this great man later and developed a feeling of utmost respect towards this remarkable man. Even then, many small incidences from his life remained hidden from laymen like me.

In 1982, came a film- an Indo-British venture- directed by famous director Richard Attenborough, on this great man. I must confess that I realised the true greatness of this man as I watched this film. In the later years, I did read few of his books and also books written about him. I have a firm conviction since then that India has been extremely lucky to have a leader like him at the right time and he was principally responsible to win freedom for India.

Indians might revere mahatma Gandhi, but there was a British leader during his life time, who was his biggest foe and one-time nemesis. He was none other than the British wartime prime minister Sir Winston Churchill, who once said, he hoped Gandhi would die from fasting and famously derided him as a “half-naked fakir”. Churchill no doubt was a great leader in his own capacity and had won the second world war for England. However, he was a true colonialist and believed that British colonies spread all over the world, should remain like that-just colonies- in future too, for the benefit of England. 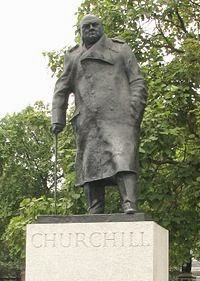 Leaving aside Churchill's colonial opinion, I have a great respect for him as he was a true statesman. I made it a point therefore to visit his statue in the Parliament square in Westminster district of central London in 1975, when I visited England for the first time. This 12 feet tall bronze statue no doubt is very impressive. On the lighter side, it is located exactly on a spot referred to by Churchill himself in 1950's when he had said: "where my statue will go". The statue was unveiled by Churchill's widow, Lady Clementine Spencer-Churchill in 1973, just two years before I had visited it. It was considered as such a great occasion that the the unveiling was attended by the serving Prime Minister of UK then and four former Prime Ministers, while Queen Elizabeth II gave a speech.

However, besides Churchill's statue, there are seven more statues on the central green of Parliament Square, all of well-known statesmen. Only one another statue standing there is of interest to our subject, as it belongs to Jan Smuts, a leader of South Africa in the early 20th century who favoured racial segregation amongst blacks, whites and Indians.

I am tempted to mention here a scene from the 1982 film, Gandhi that shows a meeting taking place between 24 year old Mahatma Gandhi and Jan Smuts. Gandhi had started a nonviolent protest campaign for the rights of all Indians in South Africa in 1893, after having been thrown off a South African train for being an Indian sitting in a first-class compartment, despite having a first-class ticket. As a result, Gandhi was jailed by Smuts’ government for his campaigning for the rights of downtrodden Indians, a forerunner to his more famous fight at home that would strike fear into successive British governments until independence in 1947. In this meeting the film shows General Smuts reluctantly agreeing to cancel the new laws and free the protesters. It also becomes very clear that Jan Smuts hated this young Indian leader. 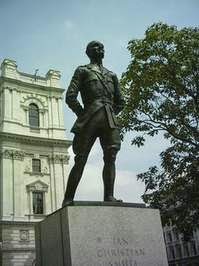 It is a kind of ironic that the same Mahatma Gandhi, who started nonviolent protests against Jan Smut and who also led efforts to end British rule in India and was repeatedly imprisoned, is to be honoured with a statue outside the UK parliament greens, where it will rub shoulders with the two leaders who hated him most, Winston Churchill and Jan Smuts.

British Finance Minister George Osborne, on a trip to India to meet the new government of Narendra Modi, has tweeted that Britain would honour the memory of Mahatma Gandhi with a statue in London's Parliament Square. British Foreign Secretary William Hague in a meeting with India's foreign affairs minister also made a mention of this and described Mahatma Gandhi as a towering inspiration and a source of strength.

It is interesting to note that the Gandhi statue follows a pattern of Britain reviving and appearing to atone for its colonial past in India during visits by senior figures. Only last year, Prime Minister David Cameron had visited the site of a notorious massacre in 1919 when troops under British control had gunned down hundreds of unarmed protesters and had described the massacre at Jallianwala Bagh in the city of Amritsar as shameful.

As an Indian I feel happy that a statue of the Mahatma would now stand in London's Parliament square no doubt but I am more amused to see how history repeats itself. In the sixteenth century, trade representatives of Britain had similarly met the Mughal emperor in Delhi with a request that they may be allowed to establish trading posts in India, or in the seventeenth century British ambassador had approached great Maratha king, Shivaji Maharaj with a similar request. The times are different and so is the context. Yet the similarities remain and are obvious.