Old tyres too have nine lives 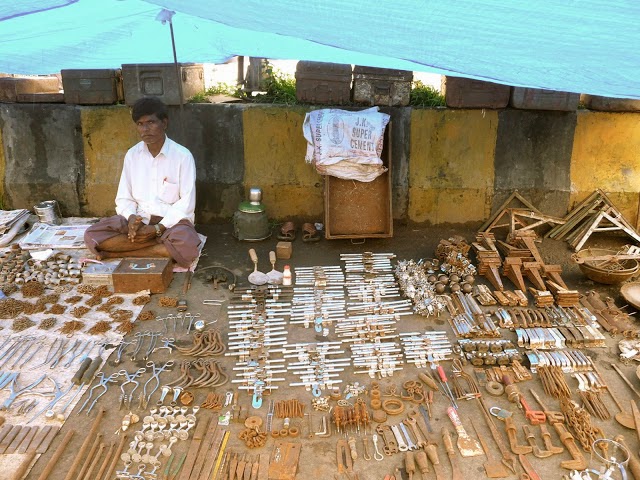 I have always thought that India would be the recycling capital of the world. As a tradition, Indians do not like to through away anything that can be used- starting from clothes to household stuff. I remember my mother, when her sarees became old, either converting them into window curtains or into wonderful soft sheets that we used to cover ourselves while sleeping. I still have few of them left, after all these years and I can vouch that nothing is more comfortable than them. Indians always used to exchange old clothes in trade to get small utensils from small time vendors, who visited the households. If a household appliance becomes defective Indians would first think of getting it repaired, only when the thing is beyond any repairs, a replacement is ever thought of; but only after exchanging the old one for whatever price it can fetch.

About few decades before, men used to be extremely proud about their wrist watches, which probably were used by their grandfather once or women showed off personal jewelery handed down by their mothers or mother-in-laws. In those days, old was always the gold. My first bicycle was the same one that my father had used once. In my home town Pune, there is a special market known as “juna Bazar” or old market. One can get here all kinds of things of personal use very cheaply. Similarly we have shops that specialized in junked steel parts of all kinds. I remember, whenever I had requirement of some steel plates or tubes in my business, I would first visit these shops and tried to see if something that suits me is available. Only if nothing could be found there, I would go to a steel merchant. 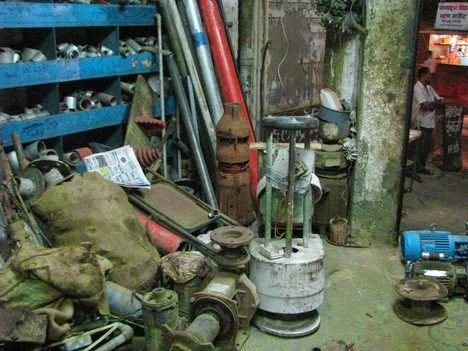 In spite of all this emphasis, there were certain things that had to be thrown away. An automobile tyre was one such item. Usually worn out tyres were first retreaded and used. But after the patched up treads also gave way, there was no option but to throw them. Even then some uses were always found, such as small pieces of thrown tyres being used as soles for shoes. However bulk of the tyres were simply thrown away.

I recently came across information about Myanmar's tyre recycling business that transforms old truck tyres into rubber washers, bushes for motor cars, rice mills and other machines and believe it not, flip- flops for use by people. This business is simply unbelievable and the way it is being done, makes me think that it is not India but Myanmar, that is really the recycle capital of the world.

Myanmar, just like its counterparts in south east Asia and other parts of the world is undergoing a remarkable transformation that the country has not seen in generations. However, unfazed by development and modernisation around, Myanmar's tyre recycling business continues to turn out an amazing range of products ranging from industrial spare parts, flip-flops, buckets and hard-to-find spare parts for used cars. 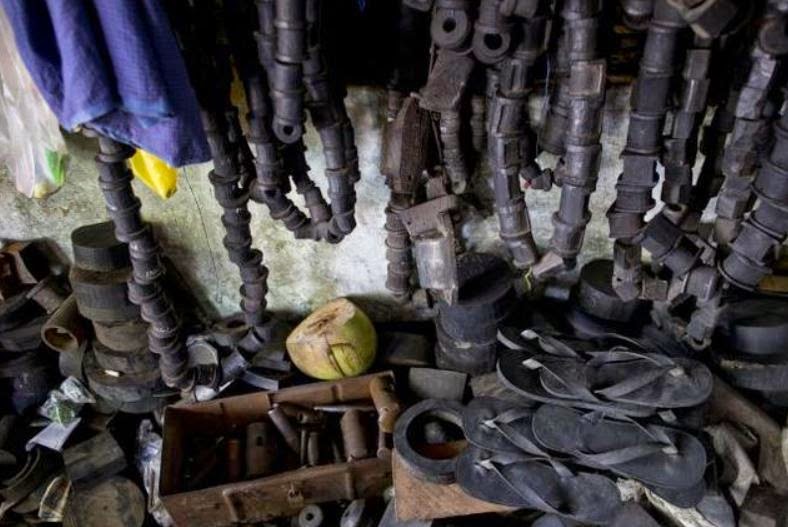 Even though, Myanmar's military rulers have handed over power to a nominally civilian government three years ago, paving the way for political and economic reforms, the vast majority of the country’s 60 million people still remain desperately poor. For them, everything has a value and if something has a value, it should not be thrown away. By city standards the flip-flops made from old tyres may look ugly, but they cost only $1.50 and are sturdy. That’s what matters and sales.

On a street of a suburb of Myanmar's biggest city, Yangoon, dozen or so shops line up, that manufacture rubber parts from old tyres. The shops are small, dark, dingy and usually have acrid smell of rubber. Each shop may have 8 to 10 people toiling away day and night. The products are surprisingly extremely popular. Myanmar's farmers find the flip-flops made from tyres much better suited than factory made ones. They say that when most factory made flip-flops get stuck in the mud with straps just snapping off, these actually lift out in one piece.

Myanmar's economy is opening and factories are springing up faster than ever. But the fact remains that but it’s still hard to get spare parts for machinery. Similarly, Myanmar has about 300,000 cars on the road, most of them second-hand. Even these need rubber bushings and washers.

Myanmar's problems have all originated from half-century of dictatorship and self-imposed isolation. Before military took over, it was Southeast Asia’s richest country but now the poorest. Businesses were nationalised and everything from toothpaste to rice rationed. Only a few cars all belonging to the ruling elite survived. Getting spare parts was next to impossible. On other hand, huge used and worn out tyres from heavy trucks, tractors and backhoes from government departments and private companies were available in plenty. This gave rise to this trade, but it picked up as people found the products reliable and cheap.

There is an idiom that says that Necessity is the mother of invention. As we can see it from Myanmar's tyre recycling businesss, how true it is! Many people believe that cats have nine lives but in Myanmar, automobile tyres perhaps have even more lives than that.