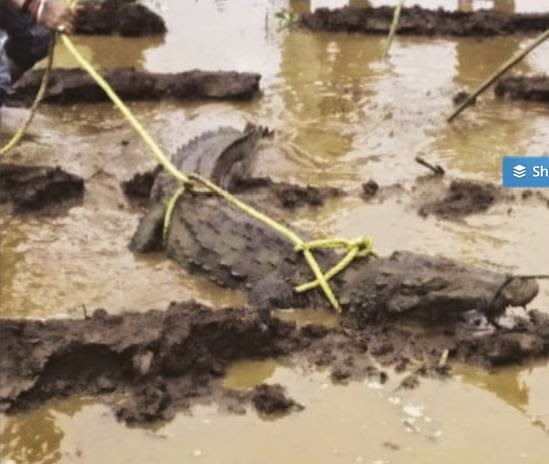 These statistics could create easily an impression that no other animal species except for humans lives on Indian landmass. Nothing can be far from truth. The uninhabitable forest areas, mountains, river gorges and above all Himalayan areas, have very sparse human habitation and actually is a home for large number of land, marine and sky based animal species. Sometimes however, these forest dwellers accidentally find themselves in areas inhabited by humans and create fear, confusion and sometimes even terror.

When I was young, discovering a poisonous snake in the vicinity of my house was not a very uncommon experience at all. We had a water canal flowing almost next to our house and during summer or on days when there was a heavy downpour, these reptiles seeking a shelter, sometimes took refuge near the house. We had to make big efforts to evict them, which usually ended in these reptiles loosing their lives. Considering our own safety, we had no qualms about this action at all, though now a days it might be considered as something that is not in rule books. 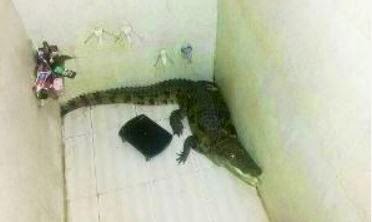 We do come across news of wild animals impinging upon human dwellings even today. The snkes and spotted panthers are not uncommon but to find crocodiles is something that is very rare indeed and getting news of two such incidences on the same day, makes it certainly newsworthy. The first news has come from a residential society in Sojitra town of Gujarat's Anand district, where a live 5 feet long crocodile was discovered by one Mr. Bharat Patel in his bathroom. Patel's were naturally shocked to see that the five foot long crocodile had occupied the bathroom of their house. Mr. Bharat Patel was entering the bathroom, when he saw this crocodile in the corner. He immediately locked the bathroom from outside and informed his neighbours about the presence of the wild animal in his house. Later forest officials reached the spot to cage the animal and later it was released in a lake in Malataj village of Anand district of Gujarat.

'Rui' is a small village in Hathkangale Taluk of Maharashtra state on the bank of Panchaganga river, which is one of the major rivers of the state. The villagers had reported, since last several days crocodile sightings in the sugar cane fields that had turrned swampy because of very heavy rainfall in the region. Two days back, two villagers gone to the field for grass cutting, saw a giant 16 feet long creature posing quietly. When the crocodile saw the humans, it made sudden and violent movements, creating terror for the two, who ran away to the village. Later villagers returned to the field with ropes and managed to closed the mouth of the crocodile with a rope lasso and then later blinded it with a cloth piece wrapped around its mouth. The tied up crocodile was loaded in a bullock cart and was delivered to the office of the forest officials, who are now planning to release it in a safe place. 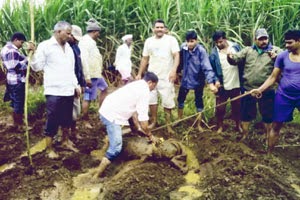 Sightings of wild animals near human habitats, according to many nature lovers, is actually a danger signal showing that humans are encroaching upon the habitats of wild animals. The forest areas are reserved for the flora and fauna and we humans should not really interfere there. When that happens, the wild creatures move out. Perhaps these two incidences might bring more awareness of this problem.