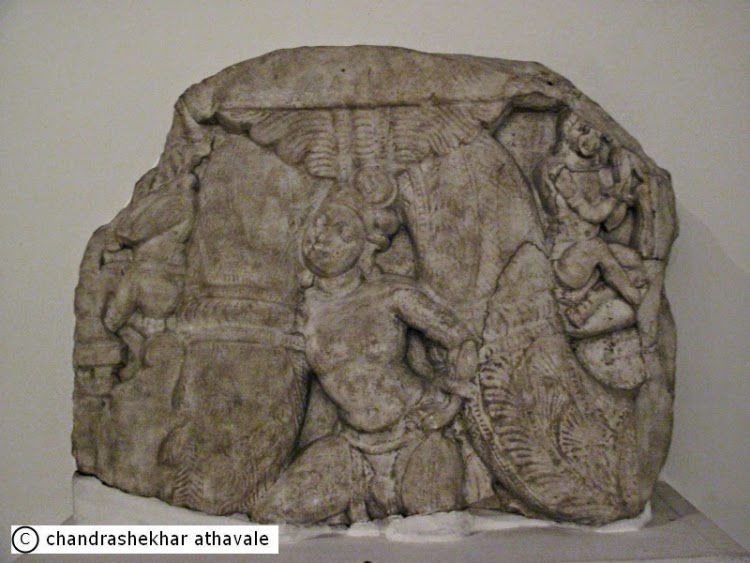 What makes Amaravati sculptures stand apart from the other contemporary works in the Deccan plateau, as displayed in rock cut temples of Karle'n, Bhaje, Nashik, earlier works at Ajanta and Pitalkhore, is the great attention paid to detailing and subtle suggestions conveyed to the spectator. When compared to Amaravati sculptures, the sculpturing in the other contemporary rock cut temples with possible exception of Karle'n, appears much inferior without any doubt. One of the reasons could be the material used. Unlike the basalt stone available in most of the rock cut temples of Deccan, Amaravati sculptors have used stones available in quarries near Nagarjunkonda. Whatever may be the reasons, the fact remains that Amaravati sculptures clearly suggest that by the time this great Stupa was finished and completely decorated in 200CE, sculpturing had come of age in the Deccan. No wonder that Mr. C.Sivaramamurti, former curator of the Chennai museum says and I quote.

“There is a freshness here, which invites study of the material with greater joy and zeal. The hackneyed theme, which has to be repeated is given an artistic twist to make it appear lively. Everywhere the sculptor has devised his own way of presentation. When one knows the mind of the sculptor and the way of his portrayal it becomes easier to understand and follow his method of approach. The charm of his effective language has compelled the attention of subsequent schools not only in India but even in far off places.” 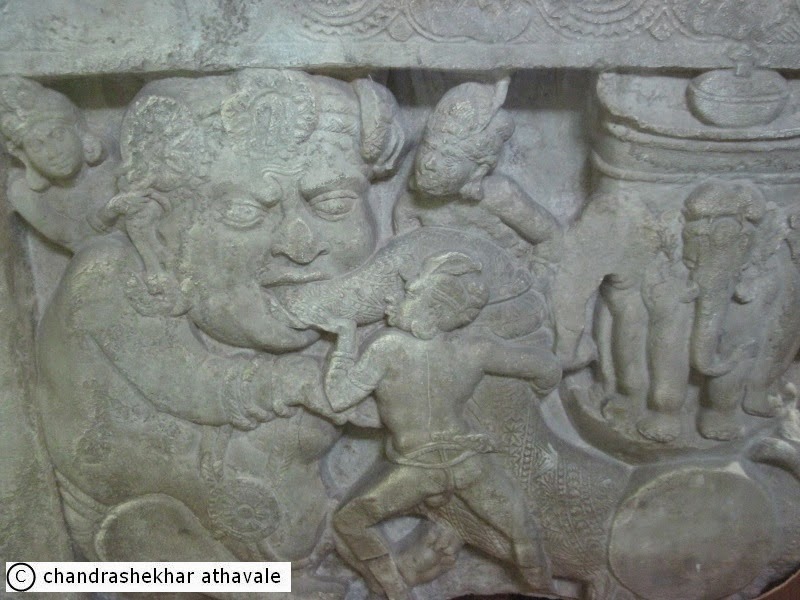 Floral garland being pulled out of a Yaksha's mounth

Let us begin with the motif of floral garlands supported by bearers. This motif became popular when Mahayana school of Buddhism became prevalent in India. The Avatamsaka Sūtra (Sanskrit: महावैपुल्यबुद्धावतंसकसूत्र >Mahāvaipulya Buddhāvatamsaka Sūtra) is one of the most influential Mahayana sutras of East Asian Buddhism. The title is rendered in English as Flower Garland Sutra, Flower Adornment Sutra, or Flower Ornament Scripture. No one knows, if this Sutra is the reason for the garland motif, initially picked up from Greco-Romans, to become popular, over a large area from India to China where Buddhism was practiced. In Amaravati, floral garland motif appears at least at two places; on the frieze encircling the Stupa itself and on the coping of the outer rail. The outer rail coping pieces are about 2 feet high and are curved on one side. As we have seen, the outer rail is pierced at four cardinal directions by gates. This means that the floral garland would break at the gates and could not form a continuous chain around the Stupa as seen everywhere else. Amaravati sculptors came out with a really ingenious solution for this anomaly. They placed special coping pieces carved with images of a floral garland being pulled out from the mouth of an either a colossal Yaksha (a divine dwarf) or a Makara (Crocodile), meaning thereby that at the places, where railing was pierced by gates, the garland can not be seen because divine dwarfs or Crocodiles had swallowed it and it was being pulled out from their mouths. Further, the dwarfs appear towards left in the coping pieces, whereas, the crocodiles appear to the right side. This indicates that the coping pieces with dwarfs were carved towards the right side of the gate and ones with crocodiles, were carved towards left of the gate. ( Remember that the sculptures on the coping were on the inside surfaces (towards Stupa drum) and not on outer surfaces.) 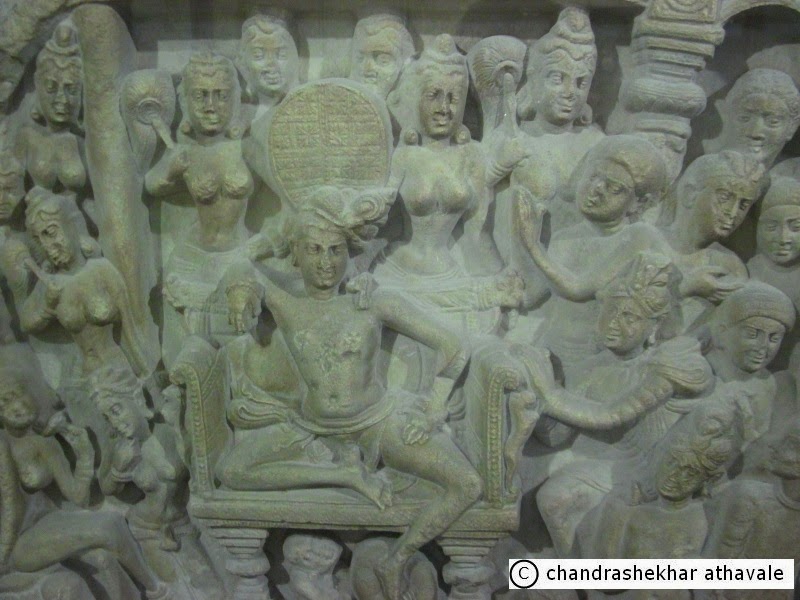 King Bandhuma and his daughters

Now we turn to a wonderfully detailed bass relief that appears on a cross-bar of the outer rail. The sculpture depicts the story of the presents of king Bandhuma who was the king of Bandhumati. He received two presents, consisting of a costly wreath and a precious sandal-wood. He distributed them to his two daughters. They in the turn, offered them to the Buddha, in his previous incarnation Vipassi. As a result of this, in their later rebirth, the elder of the two princesses was born as Mayadevi, the mother of Gautama, and the younger attained sainthood. In the sculpture the king is shown on a throne, attended by chauri-bearers. To his right are his two daugthers, the first seated and attended by maid servants and the second standing near the throne. Below the king's throne are pages offering the presents. Some men are shown on the right coming through an arched gate adjoining the palace. A horse and an elephant are also seen. The king's throne with rearing lions, the pages in tunic with curly hair, the coiffure of the maid servant at the feet of the seated princess and the archway are all noteworthy. 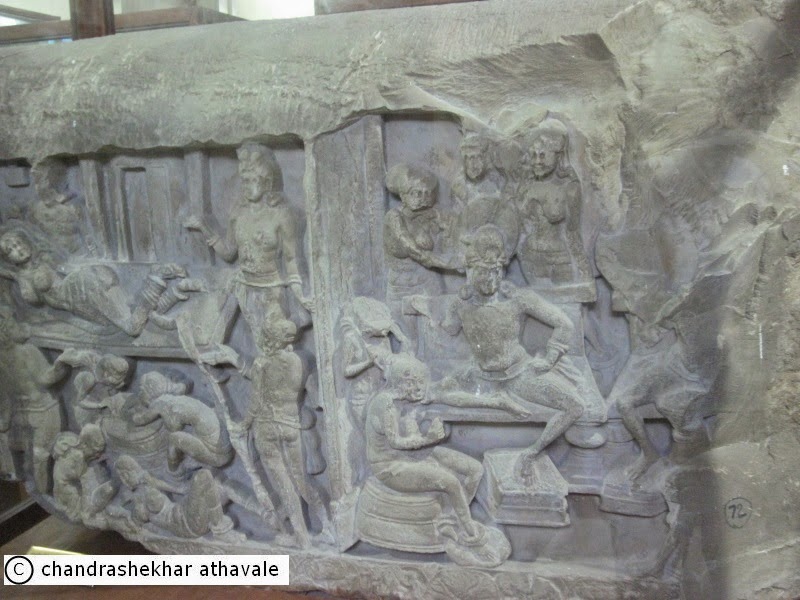 Another equally detailed panel is known as Mayadevi's Dream and Interpretation given to the king. Here on the left panel, Maya is shown reclining. Below the couch four women attendants are shown half asleep. Four turbaned men of rank stand as guards at the four corners of the couch. In the right panel, Maya is seen seated on a small wicker seat in front of the King while a Brahmin is seated to the left of the king. The Brahmin holds up his two fingers suggesting two possibilities regarding the future of the child to be born. The two possibilities are that either he would be a monarch, if he adopted the life of a house-holder or he would become the Buddha, if he renounced the world. 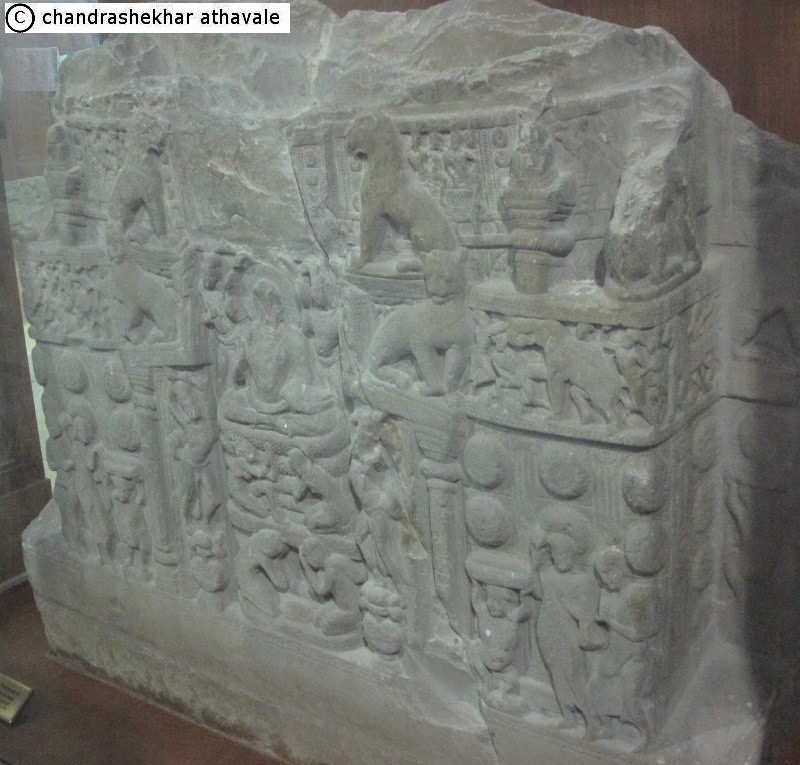 Buddha meditating near a Stupa

This panel is from the last phase of construction, when Buddha's image was allowed to be shown in human forms. The broken slab is from the Stupa casing and shows the Buddha seated on a lion throne opposite the gateway of a miniature Stupa. Below him are two Naginis worshipping him. A group consisting of a standing nobleman, a seated lady and a dwarf carrying a tray is seen on either side of the gateway. 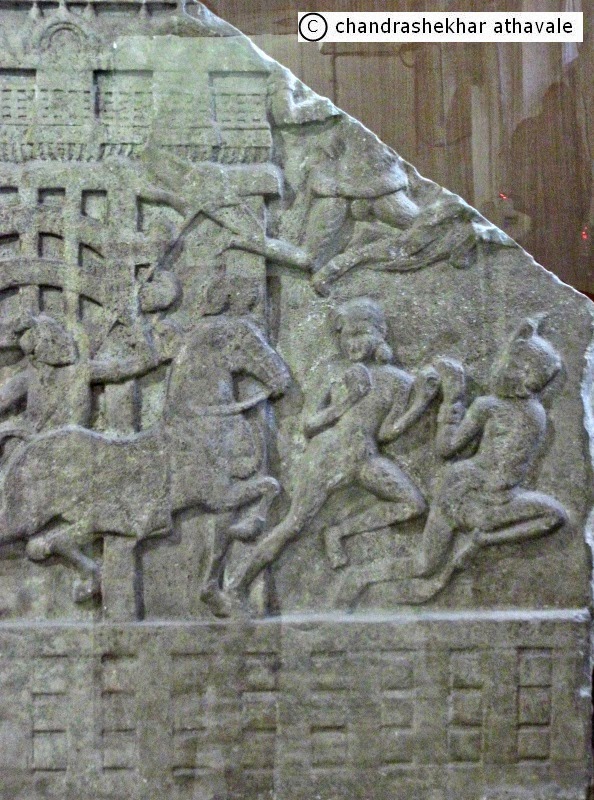 Deaparture of Goutama from Kapilavastu

This fragment is from earlier period, when Buddha's image was not allowed to be shown. It is known as the departure of Sidhartha from Kapilavastu (Mahabhinishkramana). The arched gateway in the sculpture indicates Kapilavastu. The horse, Kanthaka comes out of the gateway. An umbrella is held over it by a man, suggesting the presence of the prince. Above them are the Devas who opened the gateway. There is a rail pattern below. 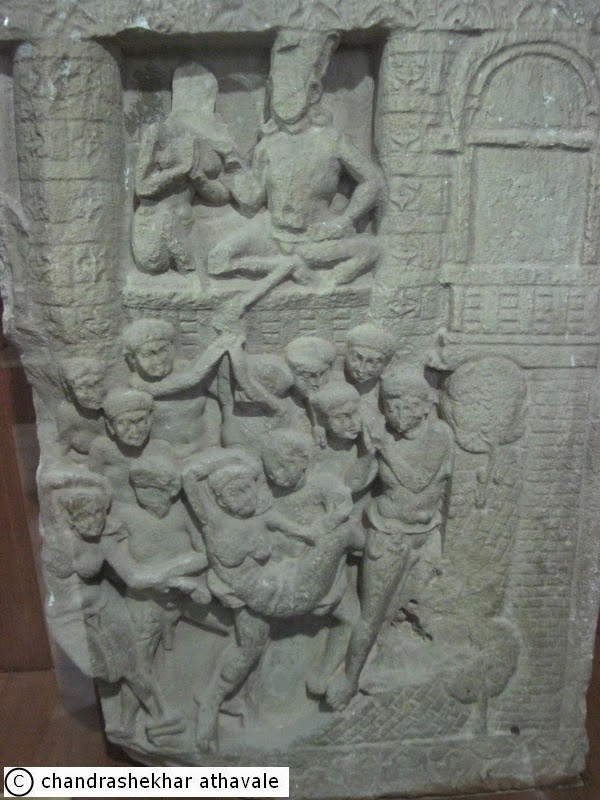 Gods infatuated with  Rohini fight each other

Lastly we come to another detailed panel depicting the story of a celestial nymph Rohini Khattiyakanna from the Buddhist work of 'Dhammapadatthakatha.' In this panel the nymph is seen with four Devas or Gods, who are infatuated with her and trying to press hard and even coerce her in accepting one of them and are also quarreling amongst themselves. Finally one of them carries her to the super God Sakka, shown seated in his palace 'Vaijayantiprasada' with a lovely damsel behind.

These and other sculptured panels from Amaravati were copied and repeated by many artists in the subsequent and later periods. The beauty and glory of Amaravati is that, it was here that the art of story telling by means of sculptures seems to have taken birth. I can well imagine thousands of devout Buddhists walking along thirteen feet wide processional circular path paved with slabs of grey limestone that lay within the outer rail and monks explaining to them the stories embedded in stone by the Amaravati sculptors. It was perhaps world's first audio-video show.

There is however some confusion regarding the exact role of Satvahana kings in the construction of this great Stupa. Two historical inscriptions have been found on the fragments of the Stupa. The first one mentions the name of king Sri Pulumavi (c.110-138 CE) and the second mentions the name of the King-
Shivaskanda Satkarni (c.145-175 CE) meaning thereby, their active support to the construction in the last phases. However, if Satvahana kings had annexed Andhra in as late as first half of the first century CE, or during the reign of Satvahana Kings Apilaka and Meghasvati, the Stupa was already under construction then as archeologists believe that work on Stupa had began much earlier, around second century BCE. If that was the case, question remains as to who actually started the construction of Stupa in the first place? Shunga Kingdom or King Kharavela of Odisha? Perhaps we shall never know the answer.

After having spent few hours with the Amaravati stones, my mind as well as my legs are really tired. I decide to call it a day and return to the hotel for some hard earned rest. Later, reflecting upon my visit to the museum, I come to the decision that I have to visit the site of the great Stupa at Amaravati, even when there is not much to see there. The stones tell their own stories but the big picture can emerge only at Amaravati. Till then there will be no real closure for me.