Hill of the Lamp; Amaravati (Part I) 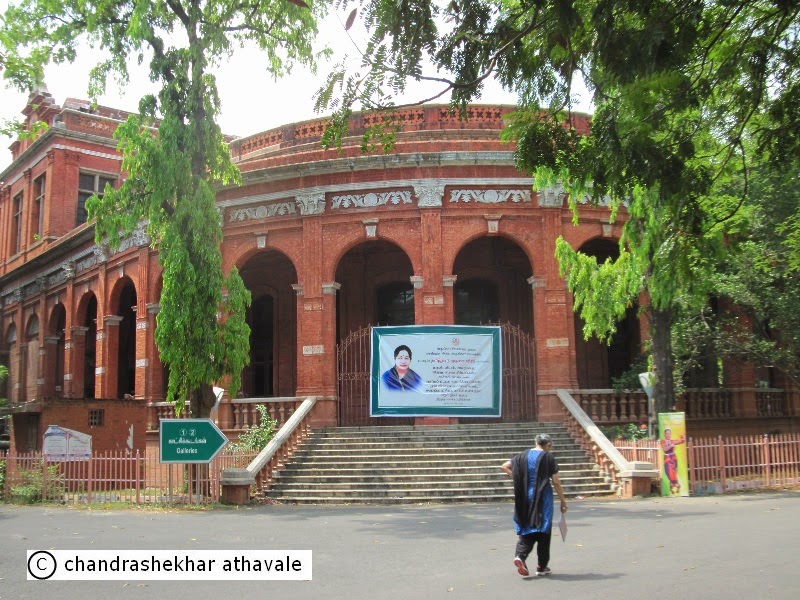 During last year, I visited many of the Buddhist rock cut temples spread over mountains of the Deccan, to look for traces of the ancient Satvahana empire that had ruled over the Deccan plateau, around beginning of our era. My visits suggested one thing for certain, that the Satvahana empire had lost its days of glory somewhere around second or third century CE. The inscriptions at the rock cut temples of Karle'n and Nashik, mention the name of Vasisthiputra Pulumavi (c.110-138 CE), son of the great Satvahana king Gautamlputra as the ruling king. However, records end here and no mention of any other king down the line are found in any of the rock cut temples at least to my knowledge. I do not propose to go into the history of Satvahanas, but one thing is clear to me that my search must end now in Maharashtra or western Deccan.

The sway of the Satvahana empire was never limited over Maharashtra only and they had ruled all over Deccan, including Andhra. There is a belief that Vasisthiputra Pulumavi annexed the Andhra region to Satvahana empire. However, Maharashtra Gazetteer suggests that it is very likely that the province of Andhra was annexed to the Satavahana kingdom much earlier in the reign of Satvahana Kings Apilaka and Meghasvati by the middle of the 1st century CE itself, if not even earlier. This fact is well confirmed by findings of Satavahana coins at many places in Andhra. I therefore knew that I can now further continue my quest only in the eastern Deccan or in Andhra. While reading about the ancient monuments in Andhra, I came to know about the Buddhist Stupa at a place called Amaravati.

Amaravati is a tiny town, situated 35 Km north of the city of Guntur on the right or the south bank of river Krishna, in the Indian state of Andhra Pradesh, which has been bifurcated very recently. In local language it is known as “Dipaldinne,” which means a Hill of the Lamp. Amaravati and the adjoining areas have had been great seats of Buddhist learning and religion at the beginning of our era. The famous Chinese monk and pilgrim, Xuel Zang mentions in his travelogue from 7th century that at Amaravati, “ though many Buddhist monasteries were deserted by then, at least twenty were still in use with a thousand monks living there.” Few readers would be able to imagine that this obscure tiny town in the interior, once boasted of a grand monument that could be compared or perhaps was even grander than the famous Taj Mahal and was visited by thousands of Buddhist pilgrims every day. The monument in form of a great Buddhist Stupa, was however lost in the passage of time and all that remained was a mound of earth. This mound was eventually called the 'Hill of the lamp' by local people and the town got its name from this hillock.

In the year 1796, a local landlord wanting to shift to Amaravati, started quarrying rocks from nearby mounds of earth to build his house. He also attempted to dig the 'Hill of the lamp' and to utmost surprise of everyone around found stone slabs with sculptured bass reliefs. The news reached a British officer Colonel Colin Mackenzie, who was a passionate collector and student of antiquity. He visited the spot and immediately perceived that the mound of earth was in fact a great Stupa having about Ninety feet diameter and Twenty feet height. Mackenzie returned to the site in March 1816 armed with a team of draftsmen and surveyors. For next 2 years they made detailed plans and drawings of the monument. After the great Stupa was discovered, a mad rush began amongst British officers to acquire the stone slabs of the Stupa. Many slabs were also distributed by the officers to various museums within India. In 1845, another British officer carried out excavation in the south west part of the mound and found large number of fragments. He sent them to Madras, where they lay neglected and exposed. In 1856 a new museum was opened in Madras. Edward Balfour, officer-in charge of the museum, decided to collect all the pieces and catalogue them. Finally 121 stone slabs were sent to England in 1859. They were sent from a museum to museum and finally in 1880 they reached British museum, where they are exhibited since. In 1880, Duke of Buckingham, then Governor of Madras, ordered complete excavation of the site. The site not converted to a large pit. More than 400 fragments were recovered mostly from the outer railing and were sent to museum at madras, where they can be seen even today. A few balance pieces are exhibited at the site in a small museum. This is the sad story, how a great monument built by Satavahana kings, somewhere around first or second century CE, was totally destroyed, after discovery, instead of being renovated and rebuilt for the future generations. From whatever that is left of the great monument, one can easily imagine its grandeur and also the importance and glory that Amaravati must have enjoyed in the past, very well comparable to Taj Mahal itself. 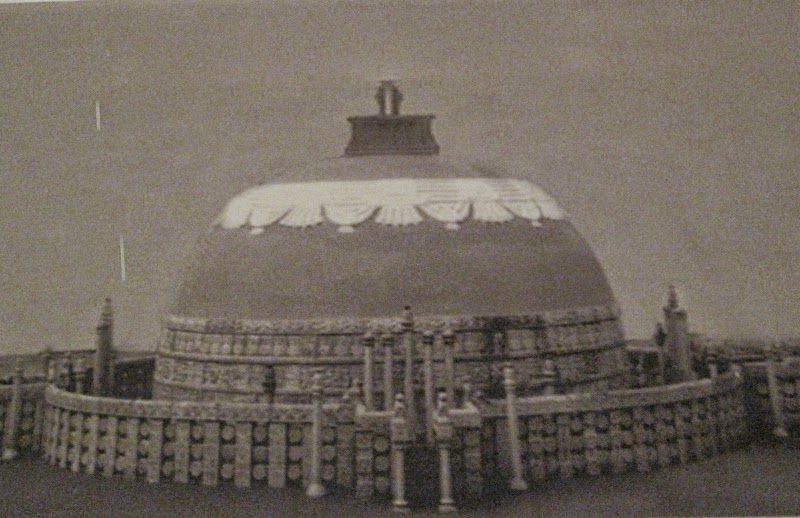 A model of the great Stupa

So, how this great monument really looked like? At the centre was a giant solid dome of a Stupa some one hundred and forty-eight feet in diameter. This was surrounded by two highly sculptured stone railings. The inner railing actually almost touched the drum of the Stupa and carried all the decoration on it. The outer railing constructed from limestone slabs, was One hundred and ninety two feet in diameter and was pierced by four gates provided in cardinal directions. The outer railing was also elaborately carved with bass reliefs depicting many scenes from Jataka stories and Buddha's life. It is not knows how such a great monument was slowly forgotten and became totally neglected. It soon became a pile of rubble and in a few centuries of time became a mound of earth and with its disappearence, the famous town of Amaravati also became a forgotten obscure town in the interior of 'Andhradesa.' 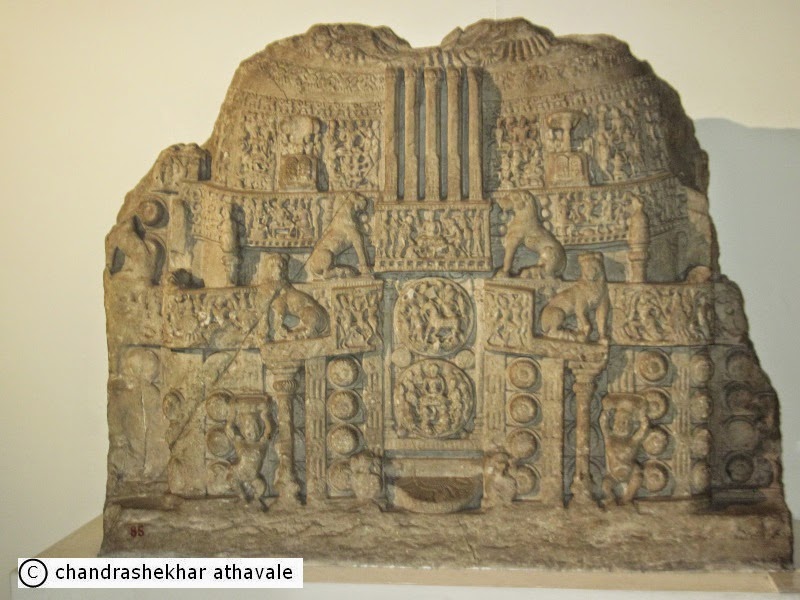 A stone slab from Amaravati Stupa; parhaps the 'Selfie' of the Stupa itself

Coming back to the Satvahana king Vasisthiputra Pulumavi , Maharashtra Gazetteer says that the discovery of the coins of Pulumavi in Andhra country and of an inscription of his at Amravati, afford clear evidence of his holding a firm sway over that province. This particular inscription etched on outer railing, informs that in Vasisthiputra Sri Pulamavi's reign, additions were made to the Stupa.

After reading about the present state of the Stupa at Amaravati, it became obvious to me that there was not much to see there except for a small museum, since almost all marble slabs with bass reliefs have beeen moved to either British Museum or the Government museum at Chennai. I also recollected that I had already seen few Amaravati stones in the National Museum at New Delhi. I therefore decided to postpone my visit to Amaravati to a later date and visit Government museum at Chennai first, to see the Amaravati stones.

Finally after much deliberations I am on my way to Chennai to seen the musum. My plane lands at Chennai airport around 8.30 in the morning. As I come out of the arrivals hall, a blast of hot humid air hits me hard. I know that it is going to be an incredibly hot day, so typical of Chennai. I take an air conditioned cab to go to the place I plan to stay; Hotel Palm grove, located on Kodambakkam High road; a distance of about 20 Km from the airport. I must be visiting Chennai after at least two decades but city has not changed greatly except for the overhead Metro line. I check in the hotel, freshen up and leave for the museum at Egmore.