Close shaves of the worst kind 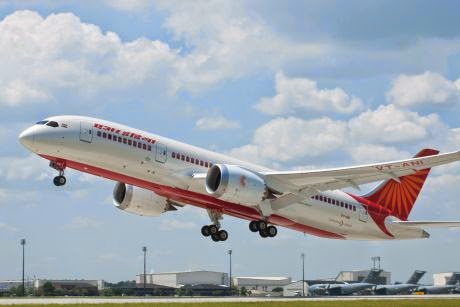 There is a web site called as Flightradar24, that keeps track of planes flying at any given moment and at any place in the world. It is a wonderful sight because you can keep track of any of your loved ones, if they are travelling by air. This web site has now revealed, what was happening in the skies over Ukraine in Europe, on that terrible Thursday afternoon of 17th July 2014 at about 13.21 PM local time. At this precise time, a Malaysian Airlines Boeing 777 aircraft on flight MH17 from Amsterdam to Kuala Lumpur, and carrying 298 people on board, was flying over rebel held eastern Ukraine about 60 Km from the Russian border. Next moment all hell broke loose as the aircraft got hit by a missile, exploded midair, killing everyone on board in an instant. The disintegrated aircraft pieces along with passenger baggage and dead human bodies rained on the town of Shaktarsk, in rebel-held east Ukraine. Another terrible air disaster caused purposely by humans had just happened.

Investigations and inquiries would now follow to pinpoint how this happened and why this was done. By any standards it is one of the greatest tragedies in aviation history and repercussions are likely to follow. Since the aircraft was flying at an height of more than 10 Km, experts say that use of ordinary shoulder carried missile is out of question and MH17 must have been brought down by a regular military missile unit. Already Russia and Ukraine have accused each other over the incident. 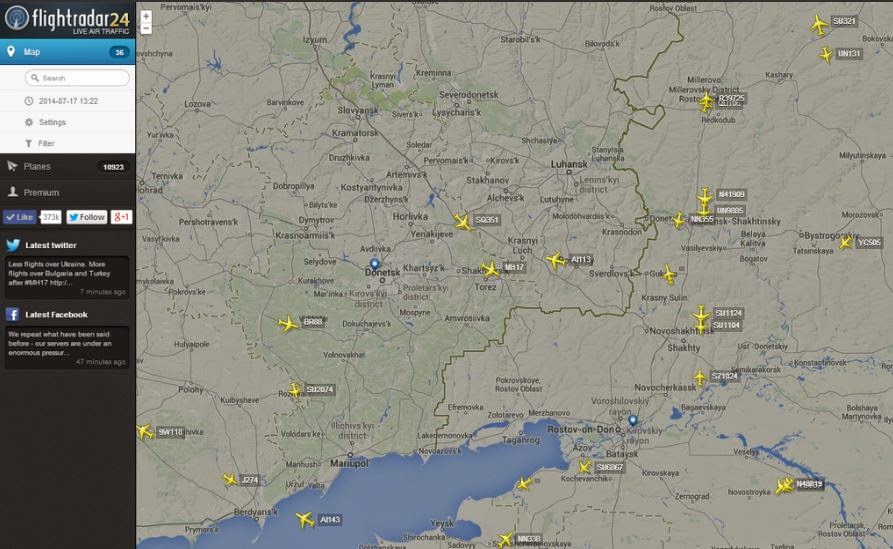 What has been not been noticed by many are some scary facts brought to light by Flightradar 24 image. From the image it is very clear that there were two other airliners in the vicinity of MH17. The image clearly shows that an Air India flight was nearby. This flight, AI 113 from Delhi to Birmingham with 126 passengers on board was flying in the opposite direction and was about 25 nautical miles (40 Km) away from the ill-fated Malaysian Boeing 777. Air India pilots say that this gap would have been covered by AI113 in less than ninety seconds. Which means that AI113 had reached the exact spot where MH17 went down in just about one and half. AI113 pilots probably did not see the flash of the exploding aircraft as they were moving in opposite direction. However, minutes before the crash, the AI pilots had heard the Dnipropetrovsk (local Ukrainian) air traffic controller give the Malaysian aircraft MH17 what is called "a direct routing". This permits an aircraft to fly straight, instead of tracking the regular route which is generally a zig-zag track that goes from one ground-based navigation aid or way point to another. When the MH17 disappeared from Radar screen, because of its closeness, the Dnipropetrovsk controller had asked the AI pilots to try and establish contact with pilots of the Malaysian aircraft who had stopped responding to its calls. The AI pilots did try to contact MH17 with a message: "Malaysian 17, this is Air India 113. How do you read?" There was, of course, no response.

It becomes absolutely clear from the image that AI113 was extremely lucky to have had a very narrow escape. Air India officials however do not seem to be accepting this fact and say:

“Dreamliner operating as AI 113 was to take a different route. AI director (operations) SPS Suri had issued a directive to avoid Ukraine's conflict zone ever since hostilities broke out in the region. We were taking a route that did not fly over the worst affected area that has been recognized as the conflict zone. But after the attack we have decided to avoid Ukraine completely.” 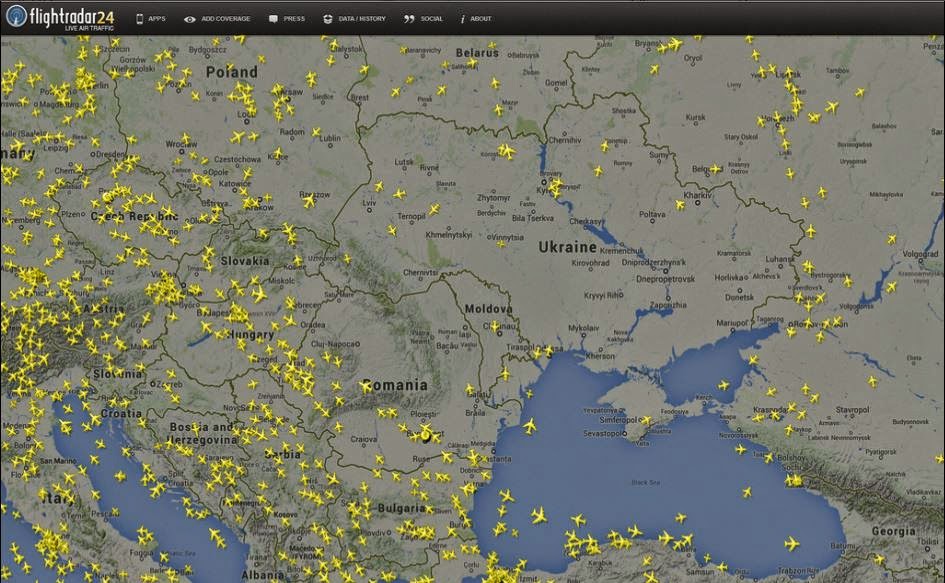 There was yet another airliner on the same path as that of MH 17 again about 25 nautical miles (40 Km) behind the MH17. It was Singapore Airline flight SQ351 flying from Copenhagen to Singapore. Even this flight, no doubt had a close shave. Singapore's Straits Times reports that actually SIA plane was "pretty close" to the Malaysian jet. It says that according to Flightradar24.com, SQ351 and Air India AI113 were both within 25km of MH17.

SIA spokesman however refused to acknowledge this fact explaining that it was against aviation safety and security protocol to provide specific information on the path of any particular flight prior to departure. The official announcement from SIA was:

"We are no longer using the Ukrainian airspace and have re-routed all our flights to alternative flight paths that are away from the region."

When news of this tragic incident reached India, Government of India was dead scared for another reason. It appears that India's new Prime Minister Prime Minister Narendra Modi's flight was in the same area, though about one hour behind the MH 17. He was returning after his trip to Brazil for a BRICS summit. Reports say the PM's Air India-One could have been in the same corridor as MH-17 perhaps an hour later. After news of the shoot down reached Air India, PM's aircraft was promptly re-routed over Black Sea. It was among the many planes that were re-routed after MH-17 was brought down.

Expecting that the needle of suspicion would eventually point to Russia, a story was planted on Interfax news agency, which reported citing sources that Russia’s President Vladimir Putin’s jet plane was travelling almost the same route shortly before the MH17 crash. Mr. Putin also was returning from the BRICS summit. The report from an anonymous source said:

“I can say that Putin’s plane and the Malaysian Boeing intersected at the same point and the same echelon. That was close to Warsaw on 330-m echelon at the height of 10,100 meters. The presidential jet was there at 16:21 Moscow time and the Malaysian aircraft - 15:44 Moscow time,” a source told the news agency on condition of anonymity. The contours of the aircrafts are similar, linear dimensions are also very similar, as for the coloring, at a quite remote distance they are almost identical. "

However no other news agency confirmed this and it became obvious that it was a planted story because of other reports contradicting Intefax’s report and said that Presidential plane was not flying over Ukraine at the same time.

After the close shave both SIA, AI and also Jet Airways have announced that they would no longer fly over Ukraine joining many other airlines such as Air France and Germany's Lufthansa, Hong Kong’s Cathay Pacific, Korean Air and Asiana Airlines making the journey to Europe little safer. Air India and Jet Airways pilots were so far used to be doubly careful while flying over Iraq, Afghanistan and Pakistan and would divert if any en route air traffic controls informed them of trouble in those regions. Added to this list is now Ukraine, the route which is actually the shortest. 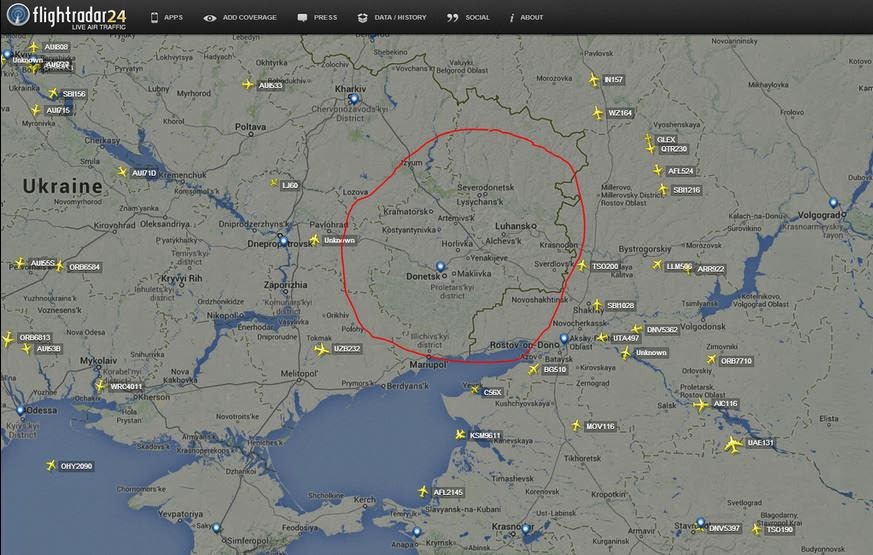 Whatever preventive steps they may take now, there is no escape from the fact that both Air India and Singapore Airlines had a pretty close shave. They were just plain lucky.