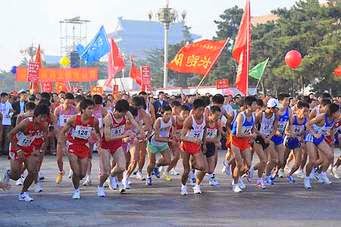 In mainland China, just like in India, system of letting yourself go at earliest opportunity on a roadside, is widely prevalent. In India, not only the village people but even city folks have no pangs of modesty or hesitation, when they get the urge, to relieve themselves by a roadside.

I visited the south Indian city of Hyderabad for the first time sometime in 1965. It is a very impressive city with its famous 4 tower landmark called as 'Char Minar,' a beautiful water reservoir right in the middle of the city known as 'Hussein Sagar' and many other tourist attractions without forgetting the famed 'Salarjung Museum.' However, all these landmarks came to me much later. By first impressions about the city were not so pleasant. My train reached the city just when the dawn broke over the city. I took a 3 wheeler Rickshaw to reach my destination. As I moved through more or less empty streets bounded by built up compound walls on both sides, my attention was drawn to large uneven areas marked on the walls almost continuously. I became very curious about these marked patches because they looked like marks left by flood waters. My curiosity soon turned into disgust, when I saw the reason for these weird marks on the compound walls. I saw few guys actually peeing on the walls, which meant that all these marks were leftover marks of someone having relieved himself there. 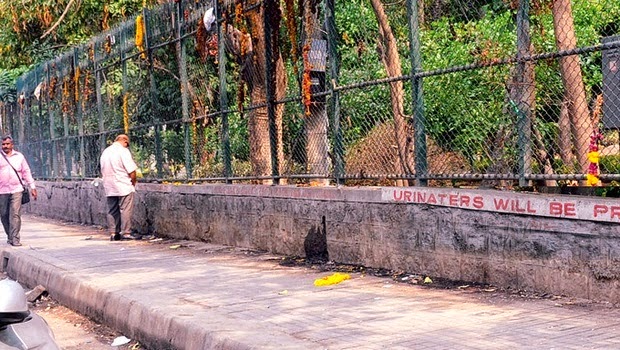 Peeing on roadsides is unfortunately a common practice in India. The local Governments everywhere try to discourage the habit and build public urinals. However old habits die hard and it is not uncommon to see a man park his bicycle or two wheeler on curbside, walk few steps to the roadside and relieving himself.

In most of the developed world, this practice is frowned upon no doubt, but developing countries like India perhaps would need many more decades and hundreds of new public urinals, before this habit can be controlled if at all. As things stand now, most of the people believe that they should rather attend to the call of the nature and let it go on a roadside, rather than wait to find a suitable toilet facility.

In Chinese capital Beijing, an International Marathon race is held in October every year. The race is for a distance of 42.195 km and was first held in 1981 and has been held every year since. This popular race begins at Tiananmen Square and finishes at the National Olympic Sports Centre stadium. In addition to the main marathon, there is a 10 km run, a mini-marathon and a half marathon. In 2009, as many as 4897 runners including 556 women had finished the marathon course. This year it is planned to be held on October 9, 2014 when around 30000 runners are expected to take part in the three events. 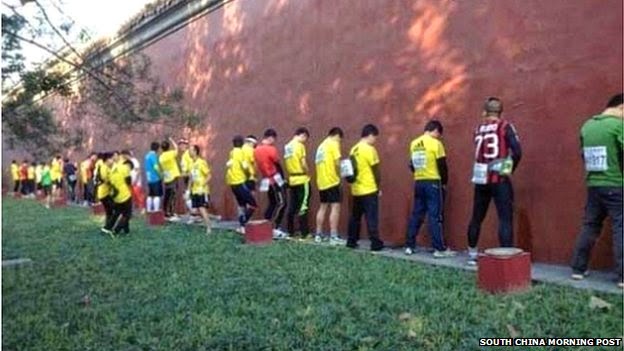 Because of the large number of participants, the organizers find it extremely difficult to provide enough toilet blocks on the way, where the race is run. Last year, there were reportedly very few toilets catering to more than 30,000 runners taking part in the marathon. When a runner is running more than 40 Km at a stretch, it is natural for him to take a toilet break on his way and such unscheduled loo breaks are tolerated at races across the world. However the authorities in Beijing are increasingly getting peeved and irritated because in Beijing it had almost "become a tradition" to urinate on the red walls of the Forbidden City, ancient capital of the Imperial Chinese Government and a UN world heritage site.

Last year, Chinese media showed pictures of Marathon runners lining up to relieve themselves on the former imperial palace. It caused a wide spread public outrage. This year organisers of the Beijing Marathon say that runners will be disqualified if they're caught urinating in public. South China Morning Post reports while quoting from the official advice for runners given by the Chinese Athletic Association on its web site that contestants who exhibit "uncivilised behaviour, such as relieving oneself in public and littering" at the 42km (26 mile) race in October will be banned. The marathon organising committee says that participants who break the rules may face extra punishment from the Chinese Athletic Association. Organisers also say that they will ensure that enough toilets are provided on the way.