Amaravati all set to gain its past glory 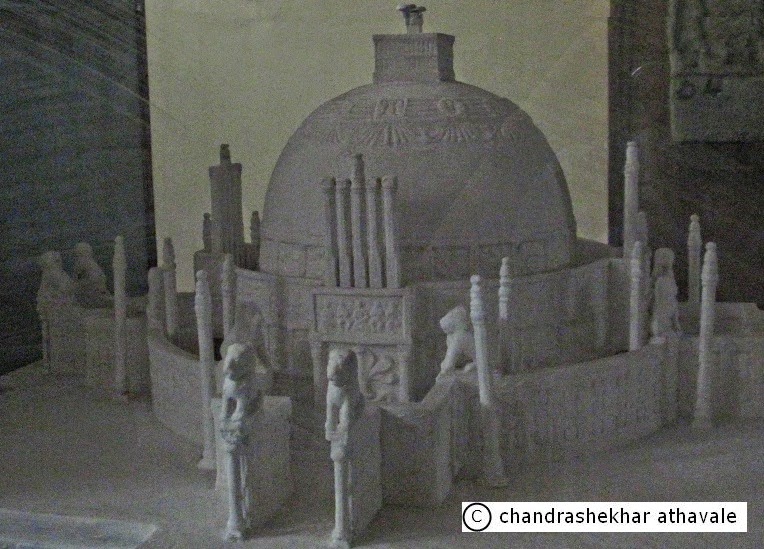 Amaravati is a tiny town, situated 35 Km north of the city of Guntur on the right or the south bank of river Krishna, in the Indian state of Andhra Pradesh, which has been bifurcated very recently. In local language it is known as “Dipaldinne,” which means a Hill of the Lamp.

Amaravati and the adjoining areas have had been great seats of Buddhist learning and religion at the beginning of our era. The famous Chinese monk and pilgrim, Xuel Zang mentions in his travelogue from 7th century that at Amaravati, though many Buddhist monasteries were deserted by then, at least twenty were still in use with a thousand monks living there. 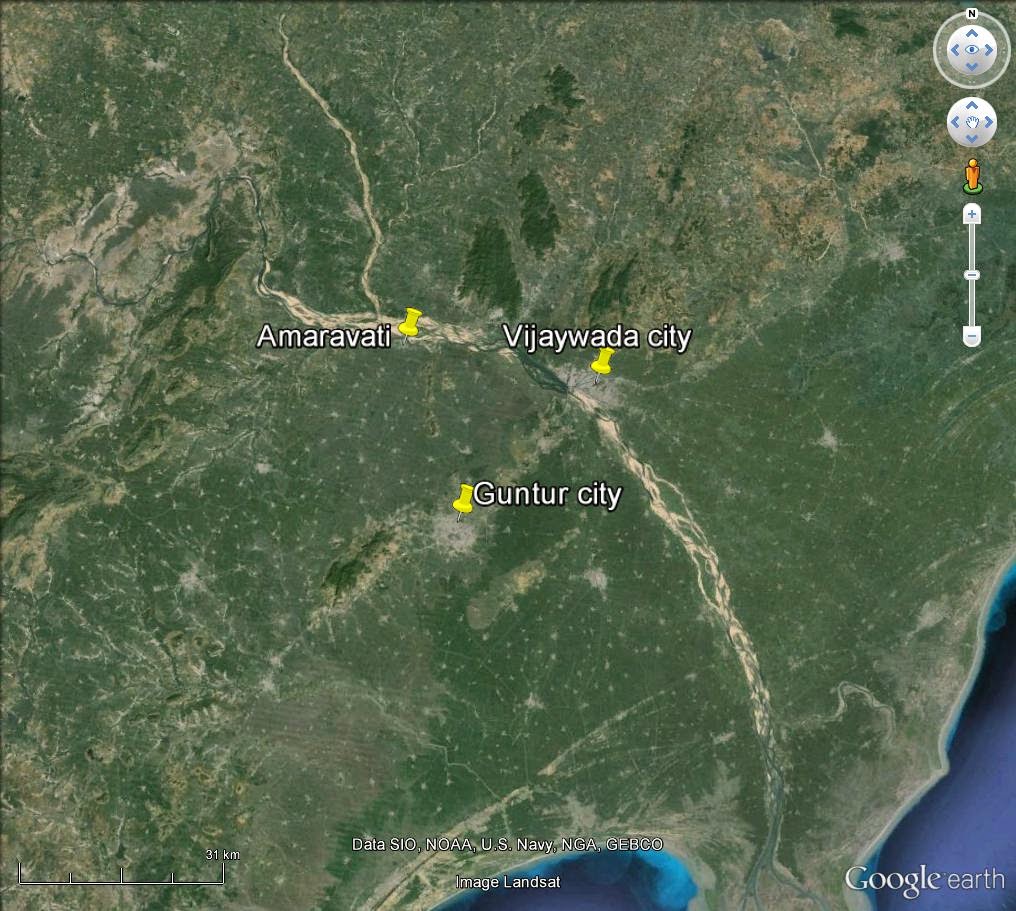 Few readers would be able to imagine that this obscure tiny town in the interior, once boasted of a grand monument that could be compared or perhaps was even grander than the famous Taj Mahal and was visited by thousands of Buddhist pilgrims every day. The monument in form of a great Buddhist Stupa, was however lost in the passage of time and all that remained was a mound of earth. This mound was eventually called the 'Hill of the lamp' by local people and the town got its name from this hillock.

In the year 1796, a local landlord wanting to shift to Amaravati, started quarrying rocks from nearby mounds of earth to build his house. He also attempted to dig the 'Hill of the lamp' and to utmost surprise of everyone around found stone slabs with sculptured bass reliefs. The news reached a British officer Colonel Colin Mackenzie, who was a passionate collector and student of antiquity. He visited the spot and immediately perceived that the mound of earth was in fact a great Stupa having about Ninety feet diameter and Twenty feet height. Mackenzie returned to the site in March 1816 armed with a team of draftsmen and surveyors. For next 2 years they made detailed plans and drawings of the monument. 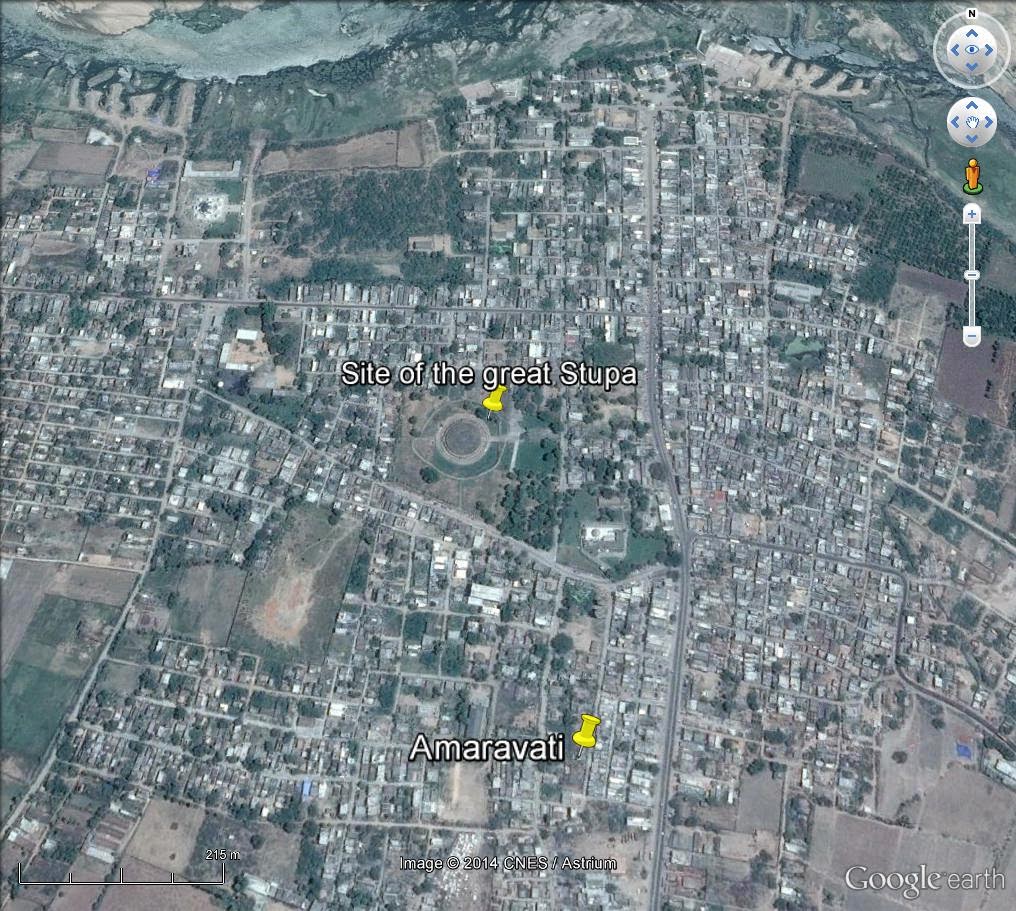 After the great Stupa was discovered, a mad rush began amongst British officers to acquire the stone slabs of the Stupa. Many slabs were also distributed by the officers to various museums within India. In 1845, another British officer carried out excavation in the south west part of the mound and found large number of fragments. He sent them to Madras, where they lay neglected and exposed. In 1856 a new museum was opened in Madras. Edward Balfour, officer-in charge of the museum, decided to collect all the pieces and catalogue them. Finally 121 stone slabs were sent to England in 1859. They were sent from a museum to museum and finally in 1880 they reached British museum, where they are exhibited since.

In 1880, Duke of Buckingham, then Governor of Madras, ordered complete excavation of the site. The site not converted to a large pit. More than 400 fragments were recovered mostly from the outer railing and were sent to museum at madras, where they can be seen even today. A few balance pieces are exhibited at the site in a small museum. This is the sad story, how a great monument built by Satavahana kings, somewhere around first or second century CE, was totally destroyed, after discovery, instead of being renovated and rebuilt for the future generations. From whatever that is left of the great monument, one can easily imagine its grandeur and also the importance and glory that Amaravati must have enjoyed in the past, very well comparable to Taj Mahal itself. 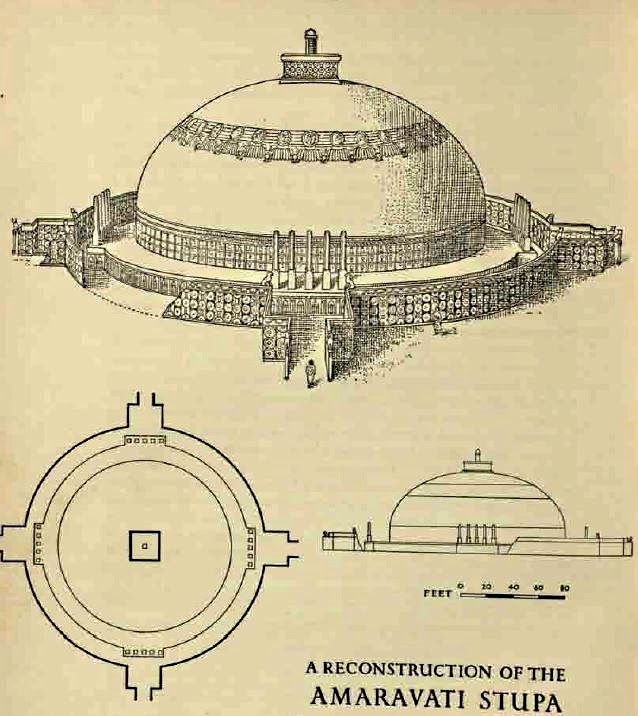 So, how this great monument really looked like? At the centre was a giant solid dome of a Stupa some one hundred and forty-eight feet in diameter. This was surrounded by two highly sculptured stone railings. The inner railing actually almost touched the drum of the Stupa and carried all the decoration on it. The outer railing constructed from limestone slabs, was One hundred and ninety two feet in diameter and was pierced by four gates provided in cardinal directions. The outer railing was also elaborately carved with bass reliefs depicting many scenes from Jataka stories and Buddha's life. It is not knows how such a great monument was slowly forgotten and became totally neglected. It soon became a pile of rubble and in a few centuries of time became a mound of earth and with its disappearence, the famous town of Amaravati also became a forgotten obscure town in the interior of 'Andhradesa.'

It is now reported that this obscure town, will hit the limelight again in future, as it has been selected as the possible site of the new of capital of the bifurcated Andhara Pradesh state. The present Chief Minister of the state is known for his acumen for conceiving and building things, from what he did in the Hyderabad city few decades earlier. He is keen to build the new capital on both sides of the river with all modern facilities and world class transportation.

It seems that after lapse of more than two millenniums Amaravati is all set to gain it's lost glory as it's star is rising again. Perhaps it might become even more famous than in the past.