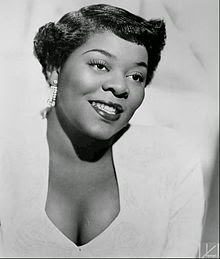 This week we feature a popular track; 'Unforgettable,' that was first recorded by Nat King Cole first in 1951 as a solo performance.

Dinah Washington, (August 29, 1924 – December 14, 1963), was an American singer and pianist, who has been cited as "the most popular black female recording artist of the 1950's. This week we feature a song"What a Diff'rence a Day Made" a popular song originally written in Spanish by María Grever, a Mexican songwriter, in 1934, but popularised by Dinah Washington. She won a Grammy Award in 1959 for Best Rhythm and Blues Performance with this song. Her version was also inducted into the Grammy Hall of Fame in 1998.It also earned her first top ten Pop hit, reaching #8 on the Billboard Hot 100.


If you can not see the embedded video on your android devices, here is the link. http://youtu.be/OmBxVfQTuvI You can also copy and paste the link in your You Tube App. If that also does not work, search You tube, Dinah Washington, What a Diff'rence a Day Made

Email ThisBlogThis!Share to TwitterShare to FacebookShare to Pinterest
Labels: Dinah Washington, Long forgotten musical tracks, What a Diff'rence a Day Made