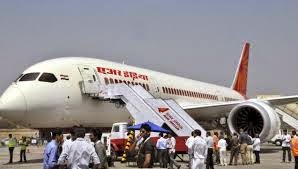 Last week, I flew Air India once again, all the way to Singapore. I had originally booked my flight from my hometown Pune to Chennai and then from there to Singapore. A month later, Air India suddenly e-mailed to me saying that Pune Chennai flight has been cancelled and is being replaced with Pune- Hyderabad and Hyderabad-Chennai flights. I had no option but to take this longer route. Fortunately, Air India did not charge me anything extra for it and finally,  I was  at Pune airport all  braced up for a long haul flight to Singapore, consisting of two stop overs, which meant that I would have to go through three security checks in all.

I was pleasantly surprised as the aircraft that flew me from Pune to Hyderabad appeared to be Airbus 319, a new acquisition by the airline. It had built in TV screens in front of all seats and all other paraphernalia. However the TV screens were never switched on during the flight and I had to resort to my trusted ipod shuffle for in- flight entertainment. The flight, I must accept, turned out to be far better than what I was expecting.

After a halt at Hyderabad that got extended to about 4 hours, due to delayed next flight, I boarded another aircraft, which to my dismay turned out to be old workhorse Airbus 320. These aircraft of 1980’s vintage have been flying with Air India for more than 24 years. Our aircraft was perhaps one of the oldest from the fleet as it showed the battle wounds of its long flying career.  I have flown in these aircraft, 15 or 20 years back and knew that there was no question of expecting superfluous things like in-flight entertainment and all that. The interiors were shabby to put it mildly. The cabin announcements had accompanying creepy sounds. The backrest of the seat that was directly ahead of me, had lost all its control mechanisms and every time, the lady sitting on it moved, the backrest also moved along with her. From the general state of affairs, I could imagine the state in which the toilets would be and hesitated to use them. Luckily the flight was of just an hour’s duration and my disinclination to using them did not cause much discomfiture to me. As a saving grace and perhaps the most important aspect of the flight, the aircraft even when so old, flew beautifully and the skills of the pilot could be felt from landing and take-off.

After a halt of about 3 hours, I flew out again, now on an international flight from Chennai to Singapore. I was bitterly disappointed, when I entered the aircraft, which turned out to be Airbus 330, first introduced in 1990’s. The aircraft, though still produced by Airbus, was again from Air India’s aging fleet. Fortunately it turned out to be slightly better than the earlier A320. The aircraft perhaps had that old flight entertainment system, where screens drop down from the ceiling on which movies are screened. However, the equipment must have been dysfunctional as there was no flight entertainment available. I made just one visit to the loo and found it to be quite not worth the visit. Again on this flight, the catering was quite nice and sumptuous. Perhaps, Air India thinks that if they feed their customers well, everything else would be tolerated by the flyers. 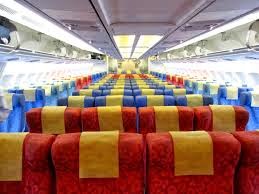 As we landed at Singapore, I had a feeling of relief because the flying was finally over. I asked myself, why did I choose Air India? The only answer I could find was that the flight timings were convenient and above all it was cheap.
Whatever may be my experience and feelings for having flown Air India, they just fade in comparison with what flyers did experience on an Air India- Delhi- Frankfurt flight- on the same day, when I flew in to Singapore.
Air India’s Delhi – Frankfurt flight AI 121, takes off from New Delhi’s Indira Gandhi International Airport on every day around 1: 35 PM. Air India has introduced its latest acquisition, Boeing 787  Dreamliner on this flight  that lasts about 8 or 9 hours and can carry 214 passengers on board. Air India pampers the passengers on this flight with two full meals, an evening snack and unlimited supply of beverages.
The readers can well imagine the kind of heavy use the four toilets in the aircraft would be subjected to with this kind of feeding to the passengers. Boeing 787 Dreamliner aircraft provide two toilets in the front for business class passengers and two in the rear for economy class passengers.
The passengers flying on this flight on 31st May 2014, discovered within hours that all the four toilets were completely choked up as the flushes were not functional at all. The situation became so bad that the pilot decided to abort the flight and return to New Delhi after flying well over three hours.
Just imagine, what kind of problems and chaos, this must have caused among the passengers, besides huge loss of operational costs and image of the carrier. The passengers could not board another aircraft in Delhi because the aircraft would have reached Frankfurt at night and landing at Frankfurt airport at night is prohibited. Many passengers flying to US destinations fly to Frankfurt to catch a flight to US later. It must have been a nightmare for such passengers.

Air India says that the bad habit of Indian passengers to throw anything they want to discard into the toilet is the reason behind this. However, the airline knows about this habit of Indian passengers very well as it has been flying them for many decades. Air India services technical parts of their craft to acceptable levels. However, when it comes to cleanliness and functionality of things inside passenger cabins, the maintenance is far from satisfactory.
Once upon a time, Air India was considered as one of the best airlines in the world. With the passage of time, came the interference from Government and bureaucratic control of the airline. This has resulted in this sorry state of affairs, where Air India finds itself into a group of airlines that loses lots of taxpayer money and might well be classified as world’s worst.