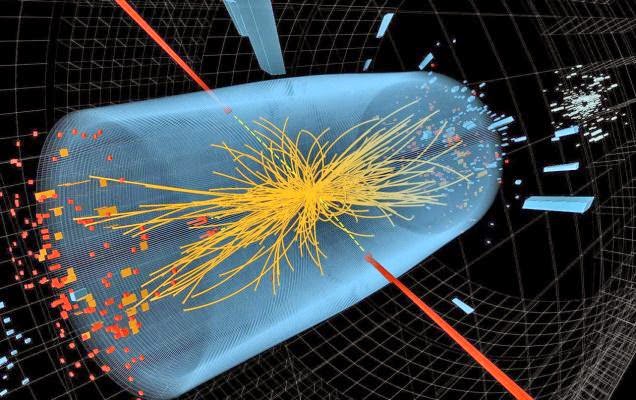 (For background information, please refer to my previous articles “God's particle and the Universe” and “ As illusive as his Goddamn particle “)

Imagine yourself solving a jig-saw puzzle. Such puzzles have hundreds or thousands of irregularly shaped interlocking pieces, but only one piece will interlock correctly with all of its neighbouring pieces. As you find the correct pieces that interlock with each other, and put them in right places, a picture slowly emerges that could be a scenic view of a sea shore or wild horses galloping or a plain country house. When you have enough pieces assembled, shapes that looked like what dreams are made of, suddenly start becoming down to earth and recognizable shapes like that of a house or a tree.

The joy of discovering that, what you thought all this time to be a weird shape, is actually an object you can recognize is something that can not be described but only experienced. Yet, even at this stage, the jig-saw puzzle assembler knows that the exact profile of the object is still far from clear. He may know that it is a house, but whether it has a slanting roof or a chimney on the top or whether the window is a casement or French window, he does not know as yet.

I consider the work of scientists working in the field of particle physics, something similar to the assembly of a jig-saw puzzle. Whenever they announce the discovery of a new particle, they are by now sure that it is there, but still there are too many missing pieces around. The absence of these missing pieces means that the discovery is still incomplete. The discovery of the most illusive fundamental particle “ The Higgs Boson” just about follows this pattern.

The CERN Large Hadron Collider is the world's biggest and most powerful particle accelerator, a 27-km (17-mile) looped pipe that sits in a tunnel 100 metres underground. Two beams of protons are fired in opposite directions around it before smashing into each other to create many millions of particle collisions every second in a recreation of the conditions a fraction of a second after the Big Bang, when the Higgs field is believed to have 'switched on'. The vast amount of data produced is examined by banks of computers. Of all the trillions of collisions, very few are just right for revealing the Higgs particle. That makes the hunt for the Higgs slow, and progress incremental. 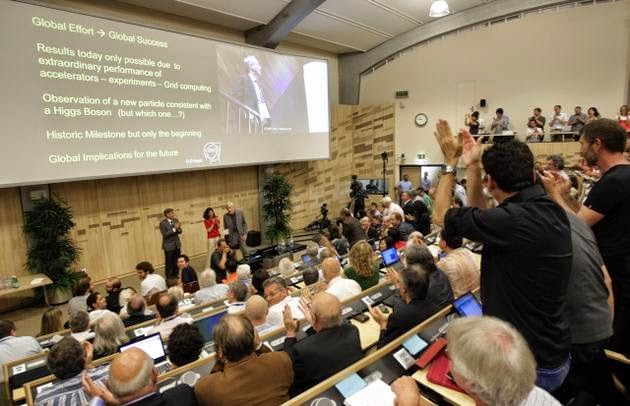 On the morning of 4 July, 2013, CERN revealed in a seminar for the first time that they had indeed discovered the Higgs boson. Even though the discovery was lauded all over the scientific world, it was obvious that there were still missing pieces around. The most positive evidence found was that when the discovered Higgs Boson got annihilated, it produced two photons; basic particles without mass. Though this was enough to prove the existence of the Higgs Boson, the picture still remained incomplete because other particles, if any, coming out of annihilation of Higgs Boson, still remained unknown. This was something similar when we hit two flint stones on each other. We can see the sparks fly off but do not know if there are any other particles that also do fly away..

All matter has mass, which means that the mass is the basic quality of matter. An Eighteenth century Chemist John Dalton first proved scientifically, that all mater consists of a basic unit entity called atom. In 1911 another British Scientist Ernst Rutherford showed that atom is not a basic particle but consists of two components, a nucleus and and electron. This was challenged by James Chadwick in 1932, who showed that the nucleus actually consists of two sub components; Proton and Neutron. In the 1960 decade, it was found that Protons and Neutrons, instead of being the basic particles are actually made from a triplet of an another particle names as Quarks. By 1970, scientific community started believing that the universe has been created by 12 types of basic particles which includes Quarks of 6 types, Electrons and some more particles, which have a short, transitory life. Most of these particles from this list that have masses are known as Fermions. We can sub divide the Fermions in two types; Quarks and Leptons(particles similar to electrons). The last type of basic particle known as Photons have no mass and move at the speed of light.

A theory is now generally accepted that these particles exert forces on each other by exchanging a class of particles called Bosons (Named after famous Indian scientist Bose.), which have a mass and also Photons, which have no mass. Bosons also are constituents of the list of the Fundamental particles. These 12 particles and four basic four basic forces of nature are now considered as The Standard Model in Physics. The last remaining particle of the standard model is known as Higgs Boson named after its inventor, Peter Higgs. This basic particle forms the mechanism by which all pervading Higgs energy field around us, gives mass to sub atomic particles by exchange of this Boson.

In a recent article published in the magazine “ Nature Physics,' a group of CERN scientists known as CMS Collaboration have just announced a breakthrough, that they have found the first evidence for the direct decay of the Higgs boson into fermions — a strong indication that the particle originally discovered in 2012 is indeed the Higgs boson. The paper concludes that these bosons decay into fermions — a group of particles that includes all leptons (electrons) and quarks — as predicted by the Standard Model of particle physics. It is now established the main characteristics of this new particle, in its coupling to fermions and to bosons, and its spin—parity structure; are consistent with the Standard Model.

The research paper says and I quote:

“ To determine whether the particles could decay to fermions, the researchers fired protons at each other in a 6—metre—diameter solenoid and used specialised detectors to determine which particles were produced in the resulting collisions. The researchers were hunting for particles called tau leptons, which have a mass of around 1.7 GeV, making them around 3,500 times heavier than their little sibling, the electron. They were able to confirm the presence of decay to tau leptons with a confidence level of 3.8 standard deviations — a one in 10,000 chance that the signal they saw would have appeared if there were no Higgs particles.”

Many readers might find this explanation rather hard to understand and may simply omit it. What perhaps is more important to know that the picture is now complete and we now know how the universe got it's mass from the Higgs energy field just after big bang.